New York Giants President John Mara said Tuesday that the NFL would probably not expand its postseason field from 12 to 14 teams for the 2014 season. But make no mistake, expansion is coming sooner or later. The television ratings for playoff matchups — even for early rounds — are so monstrous that it makes sense from a revenue-maximizing perspective to add postseason games.

But how about from a football perspective? ESPN’s Stats & Information correctly points out that, even with 14 playoff qualifiers, only 43.7 percent of NFL teams would earn postseason berths, which is still lower than the 53.3 percent qualification rates in the NBA and NHL. Then again, both of those sports play best-of-seven series to determine who advances to the next round; the NFL’s postseason is a single-elimination tournament. (And, 2013 excepted, the NFL playoffs are trending toward less predictable outcomes as it is.)

Even in a 12-team playoff format, the best team in football fails to win the Super Bowl far more often than not. But would a 14-team bracket add another layer of randomness? Using the power of Monte Carlo simulation and the theoretical distribution of true talent in the NFL, we can estimate how often a team of a given ranking in “true talent” wins the Super Bowl under both the 12-team format and the proposed 14-team arrangement. For both formats, I assigned each team a true-talent rating at random (from a normal distribution with a mean winning percentage of .500 and a standard deviation of .146) and simulated the 2013 NFL schedule 10,000 times, recording how often a team of a given talent ranking won the Super Bowl. Here are the results: 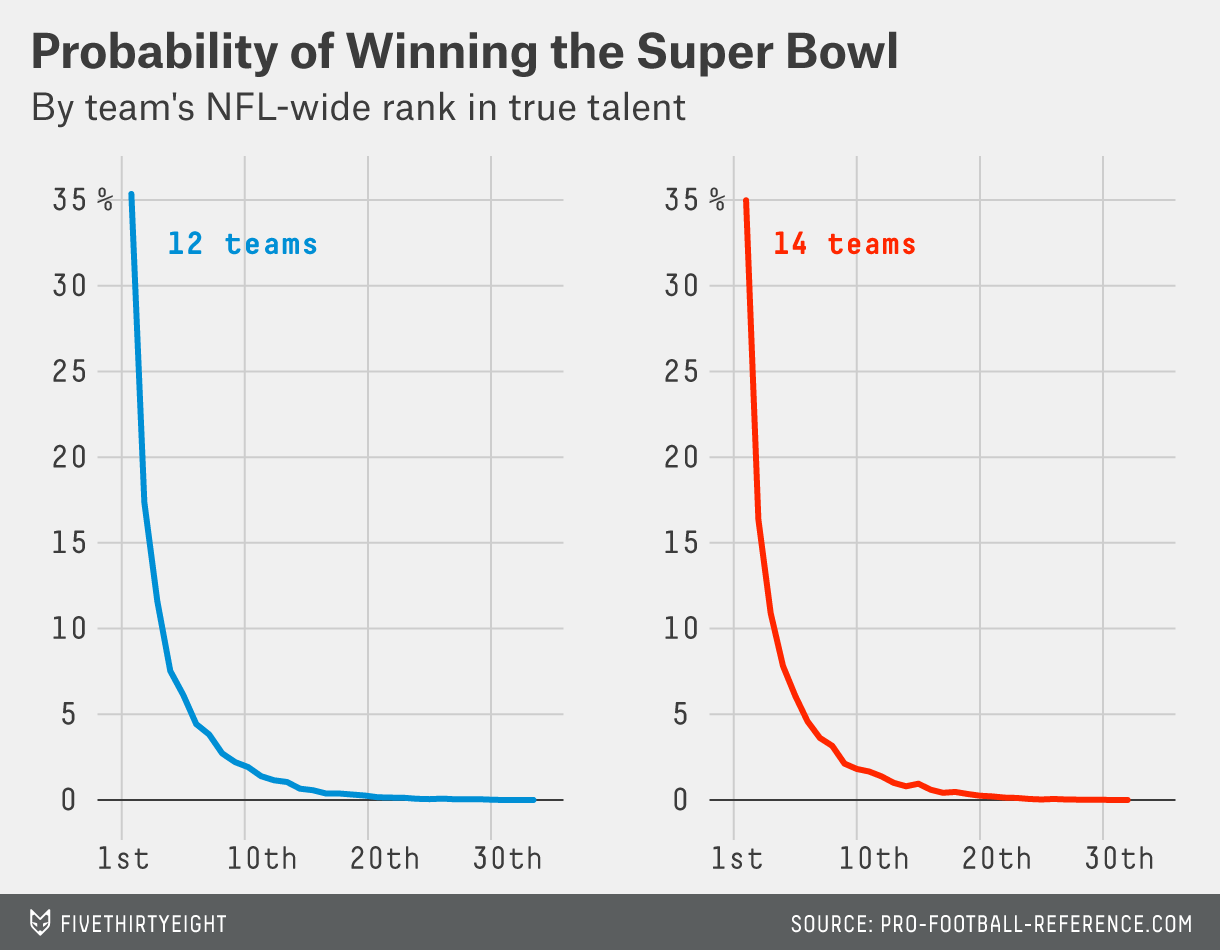 As it turns out, a 14-team playoff format wouldn’t change much for the favorites’ chances of a Super Bowl victory. The No. 2 seed in each conference would be forced to play an extra game (rather than receiving a bye during the wild-card round), but that doesn’t move the needle a lot — mainly because the No. 1 seeds still get byes into the divisional round.

What would really shake things up, though, would be a move to a 16-team bracket, which would give the NFL a playoff participation rate closer to the NBA and NHL (although the NFL would still be lower). If we run the same simulation process above but plug teams into a 16-team playoff format, the following probabilities emerge: 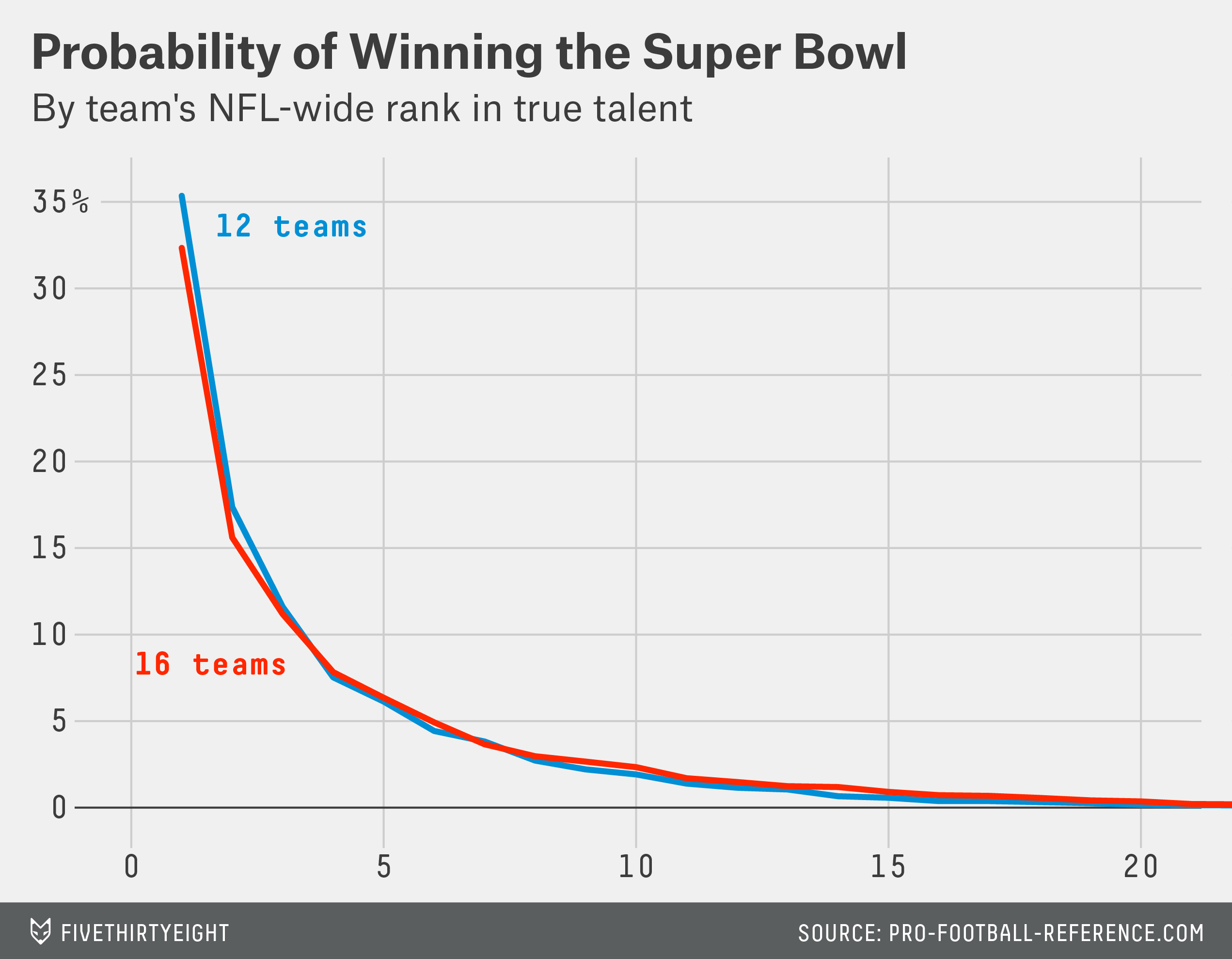 Forcing the top seed in each conference to play an extra game would drastically shift the Super Bowl odds for the NFL’s three most talented teams, redistributing much of their current probabilistic advantage across the rest of the league. The move to a 16-team playoff would be a much bigger change than from 12 teams to 14.

The remaining question is whether that’s a bad thing. A 16-team playoff would increase the role of chance in the NFL’s postseason — an element which has already been on the rise in recent seasons. The NFL’s landmark popularity over the past decade suggests that such parity has moved the league closer to the optimal mix of determinism and randomness. (By contrast, a system designed to turn the NFL playoffs into a science experiment always yielding the most deserving champion would be tedious and unpopular.) But it’s not clear whether there are diminishing returns to the NFL’s parity formula.