For decades, from Menudo to One Direction, groups of three to five men with obsessively maintained hair and passable choral experience have menaced this great nation. This lurking shadow had its frosted-tipped beginnings in the 1970s and ’80s, but it was only during the ’90s that President Dwight D. Eisenhower’s warning about the Boy Band Industrial Complex truly came to fruition. And today, we’re stuck with the bands’ spiritual descendants.

But sunlight is the best disinfectant, and so this week, I’ll shine some statistical light on this plague. I used two data sources, The Echo Nest and SongMeanings.com, to examine boy bands from the 1990s. The Echo Nest has data on over 35 million songs by more than 2.7 million artists. In addition to having information about song length and popularity, The Echo Nest has also developed tools to analyze tunes for, among other things, key, tempo and even sophisticated values such as “danceability” and “energy.” SongMeanings is a repository of the lyrics of popular music with a following devoted to analyzing them for meaning. (There’s more about my methodology at the end of this piece.)

So, let’s look at some basic information.

Boy bands, more than most musical acts, are known for their ephemerality. The band forms, gains popularity and then dissolves as members pursue solo careers or sell hair-growth products.

Indeed, of the bands in our data set, 35 had data about establishment (one didn’t), and of those, 66 percent broke up at some point. (The actual number may be higher depending on the quality of data for some of the more obscure international bands in our set, and it also doesn’t include bands that went dormant or on hiatus rather than formally breaking up, such as the Backstreet Boys.)

Of the 25 bands with known years of both establishment and disestablishment, the average boy band existed for 6.8 years, which seems just long enough to explode into popularity, have a solid sophomore album, replace two or three members of the lineup, gradually go out of style and become a difficult bar-trivia answer. And it’s not just that all pop artists are short-lived. Looking at a set of 356 general artists that had at least one song appear on an annual Billboard Top 100 chart in the 1990s, boy bands lasted a briefer amount of time than the typical artist.

This only accounts for the first run of the bands in our set, so comebacks aren’t included. Still, of bands with a known start year and end year, boy bands are about 18 percent more shorter-lived than other bands that were founded and charted in the 1990s.

But is an abbreviated life and a swift death the end for a particular boy band? Of course not.

Of the 25 bands that broke up at some point, 10 (40 percent) re-formed for a comeback tour. Among those 10 comebacks, the median number of years the groups waited before re-forming was eight years.

We’ll have a few more installments in this series. Next up: a look at the ages of “boy” band members.

Methodology: To build the set of ’90s boy bands, I narrowed down The Echo Nest’s library of music to boy bands from the 1990s by pulling a group of 97 artists who had both the “boy band” and “90s” content tags, then manually narrowed the list to 36 pop artists who were explicitly boy bands with both artist and song data: 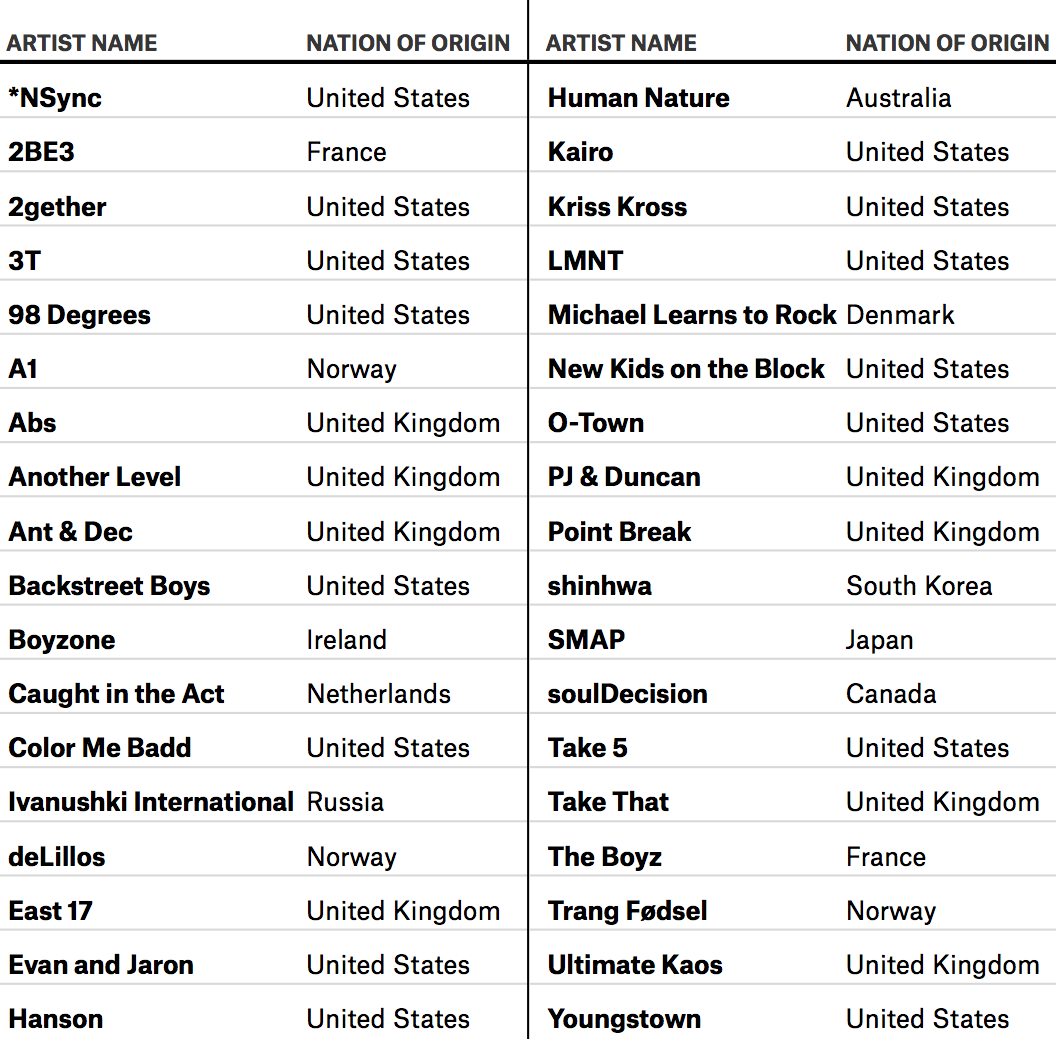 I also built two other data sets, one of songs and one of artists, to serve as a generic sample of ’90s music. I pulled the songs from the Billboard Top 100 for each year of the decade and tried to find Echo Nest profiles for the songs and their artists. There were 623 confirmed song matches. I also pulled data on the 355 artists of those 623 songs, 155 of whom were founded after 1990, to compare with our boy band set.