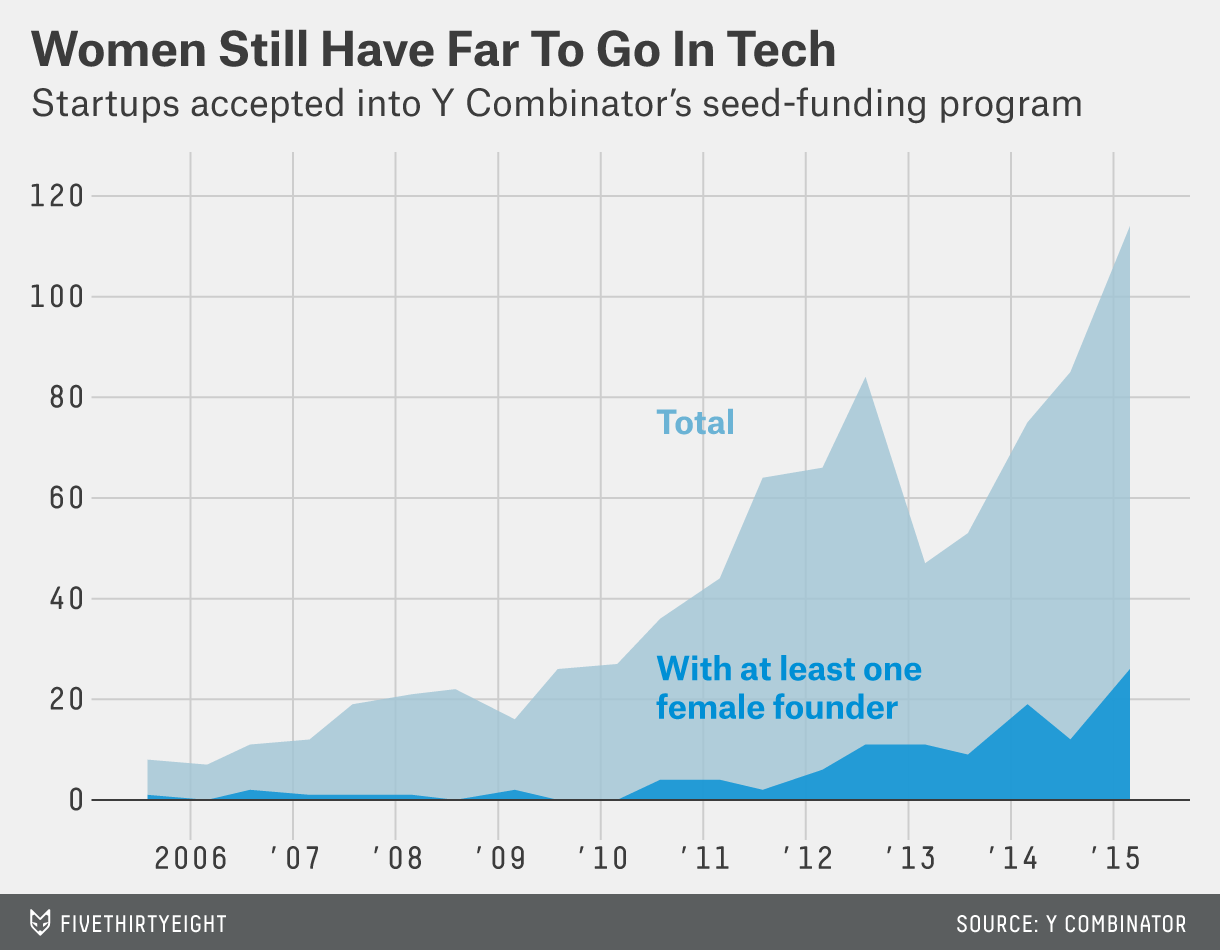 Dropbox, Reddit and Airbnb are all among the most successful tech companies founded in the past 10 years. And they all started in the same place: Y Combinator, the startup incubator of choice among tech entrepreneurs. Monday marks Y Combinator’s semiannual Demo Day, when companies make their public debut and solicit investors for more money.

We don’t yet know which tech innovations this batch of startups will bring, but we do have an idea of who’s doing the innovating. Y Combinator released stats on its current batch of startup founders last week, and they’re still overwhelmingly white and male. This is the biggest group to date, made up of 114 startups with founders hailing from 18 countries. Of these companies, only 22 percent have a female founder, 8 percent have a black founder and 5 percent have a Hispanic founder.

These numbers aren’t necessarily surprising — the lack of diversity in tech has been well-covered. In the past, Y Combinator itself has acknowledged that it could do a better job. Its president, Sam Altman, has written that “sexism in tech is real” and that “we — the tech industry as a whole — need to fix this.”

Selecting companies with diverse leadership to fund is one of the ways to fix it. The people leading companies today are the ones who become gatekeepers in the future. Although funding from Y Combinator doesn’t guarantee success, the company has a remarkable rate for picking winners: According to incubator database Seed-DB, only 11 percent of the startups that Y Combinator has funded have died. Given the stature that founders have in the tech world, that means that every Demo Day announces more entrants into the next generation of tech big shots.

I reached out to the company to get historical stats on the diversity of their startups to put these numbers in perspective. Y Combinator hasn’t tracked race or ethnicity previously, but it did give me the data on how many women founders have been in each batch. You can see the year-by-year breakdown in the chart above. Female representation in Y Combinator batches has grown, but seemingly not as much as the call for more diversity in tech.

I’ve written about tech culture’s self-perpetuating diversity problem. One Center for Talent Innovation (CTI) report found that although women make up a majority of science, engineering and technology majors, when it comes to the workplace, they feel “marginalized by lab-coat, hard-hat, and geek workplace cultures that are often exclusionary and promulgate bias.” About one-third of American women in these fields said they were likely to quit within a year.

If progress is going to be made along the lines pointed out in the CTI report, adjusting the culture is the first step. As my colleague Nate Silver discussed with Sheryl Sandberg earlier this month, men play an important role in improving gender equality, and the tech world is just one example of that: