Due to McCain’s bounce in the polls post-convention, our new list of battleground states has changed. According to our current projections, John McCain would win 274-264.

This is different from the pie chart you see in the top left of the site, which averages the electoral vote based on simulation runs. This mid-month update simply gives each state’s EVs in full to our projected winner, and we add the totals. It’s essentially the same split as the Bush-Kerry race, with Iowa flipped from the Republican column to the penumbra zone for Obama, and a narrow win for Obama in New Mexico.

With Colorado sitting at McCain by 0.3%, any tiny movement and a 9-EV flip would change the winner of the 2008 presidential race. As we leave Las Vegas today for Gallup, New Mexico, we’re going from the frying pan into the fire of the ground game battle. 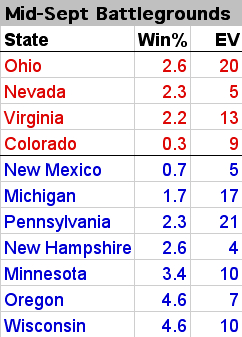 One of the notable aspects of our Penumbra tables below is that the national tracking polls are having a large undue influence on states that aren’t getting polled as much. Notice that California, Illinois and Massachusetts have entered our Obama Penumbra chart, but also notice on the righthand column of our individual state polling that it’s not because Obama’s getting poor polling in these states. For example, our projection model shows Obama winning California by 6.9% but that no individual poll has ever been that low, and that nearly all CA polls show double digits. 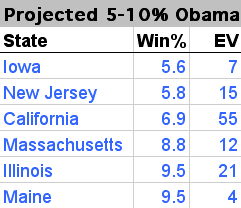 For McCain’s Penumbra states, you’ll notice a lot of “former” battleground states in this column, some of which we believe could still be battlegrounds and will re-tighten after McCain’s post-convention bounce fades and the debates begin. 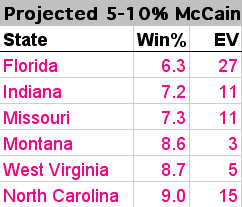 Overall, the national tracking polls have had a more distorted effect on states that don’t get polled as often. Colorado, by contrast, has barely moved because it does. In fact, Colorado and Ohio were the states which flipped since our last update in Mid-August. Each moved fewer than three points, but that changes our winner-take-all projection.

Thanks for being patient with us as Nate and I are each on the road (albeit in different places). We’ll be checking in with our Las Vegas update later today and of course Today’s Polls.