As we’ve done on the sixteenth of every month since June, FiveThirtyEight presents the our final update of battleground states, now a mere 19 days before the election. It is not a pretty scene for John McCain. For Barack Obama, the view looks pretty sweet.

Again, when you look at the pie chart on the upper left of the page, you see a decimal point to one place on the electoral vote projection. That number comes from the 10,000 daily simulations the model runs. Essentially, it’s the final outcome simulated 10,000 times and then divided by 10,000. This monthly snapshot says, if we give 100% of the electoral votes for each state we project into one candidate’s column, the final tally would be: 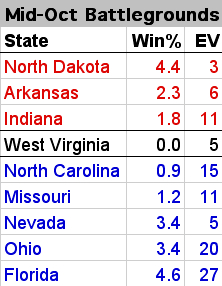 This list has changed dramatically from mid-September. Not only are Virginia and Colorado no longer on John McCain’s side of the battleground list, they’re in Barack Obama’s Penumbra State territory. 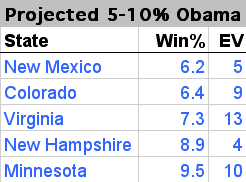 Due to both movement in the numbers and heavy African-American turnout in southern states, John McCain’s Penumbra States are ones he’ll need to cross the 150 electoral vote barrier: 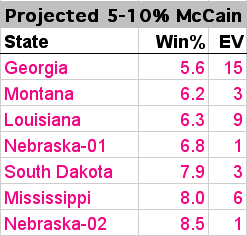 You’ll notice that Nebraska’s first congressional district actually appears closer than Nebraska’s second district, which we visited at the end of September. In the absence of much public polling data at the specific district level, we may see unexpected predictions like this, but hopefully the district will see more polling.

It’s important to notice that New Hampshire is the closest Kerry state, and it’s 8.9 points in Obama’s favor, barely holding onto the Penumbra State. Iowa, which George Bush won in 2004, is projected at 15.0 points.

Michigan, Pennsylvania, Oregon and Wisconsin, which were battlegrounds in our mid-September projections, are now all double digit spreads. Every one of Obama’s penumbra states from that report is now double digits. The red states moving into McCain’s penumbra zones are moving there as the newly registered voters begin to get polled. When the Travis County, Texas Democratic Party Coordinated Campaign registers 30,869 new voters in a cycle when Texas isn’t supposed to be on the map at the presidential level, something seismic is happening.

The debates are now over. Nineteen days, and America will have a new President-Elect. From every bit of available evidence, that person looks to be Barack Obama, distinguished Senator of Illinois.