The last month has seen a nearly across-the-board uptick for John McCain. That’s his good news. The good news for Barack Obama is that no states have flipped in our projections since mid-July. Since that month showed more of the McCain states inside of five points closer to the dead-even line, it’s now Obama whose states are slightly closer to that line. Two Obama-projected states sit on the precipice of flipping: Ohio and Colorado.

The mid-August projection — using a winner-take-all model rather than the probabilistic version that we usually use here — remains at Obama 293, McCain 245. 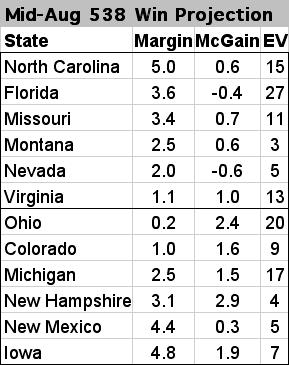 Since McCain’s movement was small but consistent, we’ve added a column for this month called the “McGain.” Movement toward McCain is represented by a positive number. The line demarcates McCain-projected states from Obama-projected ones. Although no state has flipped across the line this month, New Hampshire and Iowa found their way inside of five points and Indiana is now projected outside of five points for McCain despite a polling average under two points. 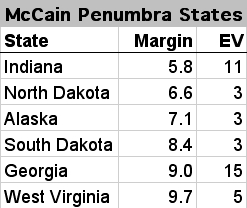 From July, South Carolina, Arizona and Texas have moved into double digit McCain projections, while Indiana joined this group’s ranks. 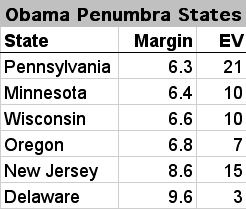 In the last month, Minnesota has made a strong move from double-digit land into this group, going from Obama +11.6 to Obama +6.4. Iowa and New Hampshire graduated to battleground status and the remaining states stayed put. While Minnesota’s strong movement isn’t good news for Obama, the truth is +6.4 and a far better ground game is still fairly comfortable.

Obama made incremental gains in our projections for the battlegrounds of Nevada (0.6), Florida (0.4) and Pennsylvania (0.3), but mostly found his numbers slipping elsewhere. The biggest explanation can be found in the Super Tracker. Notice that in mid-July Obama’s lead was roughly three points; today it is roughly one point. That two-point slippage tracks with the projection movement this month.

The next time we update our battleground projections roughly 11 days after the final gavel in St. Paul, remember that “par” is a lingering McCain post-convention bounce of just over two points on average; for an explanation why, see yesterday’s post on what a convention bounce looks like. That means that if McCain is polling two points higher across the board than he is today, our projection will hold him steady.

This battleground report does not include today’s polls, so this is our forecast as of Saturday morning. Colorado and New Mexico have ticked slightly closer; New Hampshire has slightly widened. North Carolina has edged just into the Penumbra category if we were including today’s results, and Missouri is now almost there.

The significant story around field organizing will still have its say, mostly separate from the polling model. Remember that a strong field program working against a poor one (without doubt that is the case right now) puts McCain still in the position of either actually getting a field program working at better than 3% of Obama’s output or risking these close states tipping in Obama’s direction under the polling radar.