A month ago, we brought you the battleground states based on the site’s model, and it’s time for an update. Recall that the projection is not what would happen if the election were held today (that’s the snapshot), but what 538 projects will be the November result.

Based on the data, we project 11 states inside of five points: 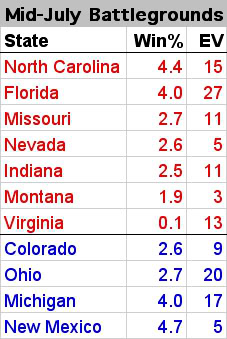 Five points is somewhat arbitrary (why not four, six, seven, etc.). One argument supporting five points is that ground organization and GOTV tends to not be able to make up much more margin against an accurate poll of voter preference. Whatever the dividing line, it is important to pick one number and stay consistent over updates. We’ve used five before; we’ll stick with it.

Since the mid-June update, New Hampshire and North Dakota have moved outside the five-point range, toward Obama and McCain respectively. They remain the next two closest states outside the five-point dividing line (Pennsylvania ties New Hampshire at a 6.0% projected Obama win). Colorado has moved into the range, and all the other states have remained in place. Within the battleground group the states have jostled for ranking position, but given that Nate’s tweaked the model a bit in the interim it’s not worth attaching much importance to the tiny changes.

As for the Penumbra States, the model projects, eight McCain states will finish between 5-10 percentage points, for 81 EVs: 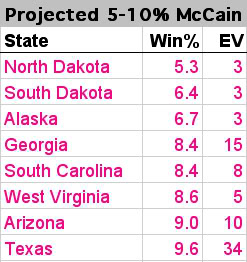 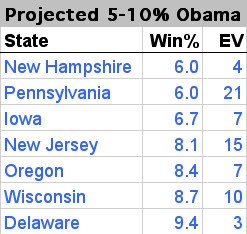