This past Friday, I woke up at the crack of dawn to do an interview for Fox and Friends. As I walked into the studio on the ground floor of the News Corporation building, a producer, the urgency apparent on her face, handed me a printout of an article indicating that Barack Obama’s approval rating had dropped to 50 percent in the latest Gallup poll, which is where it remains as of this morning.

This is modestly unorthodox, for what it’s worth. I’ve done a few dozen television interviews now and have never before been handed a piece of paper with what I guess are supposed to be that day’s discussion points. But this is a morning show and Obama’s approval numbers were not a topic that I’d discussed the previous night with the producers; they wanted to make sure I was prepared. No harm there, I suppose.

First of all, although I’m on record as being quite pessimistic about what’s liable to happen to the Democrats in 2010, odds are that Obama’s approval will have to be somewhat worse than 50 percent for the Democrats to lose the House. The relationship between Presidential approval and his party’s fate at the midterm elections is quite linear. An approval rating of 50 percent would typically be associated with a loss of about 26 seats: 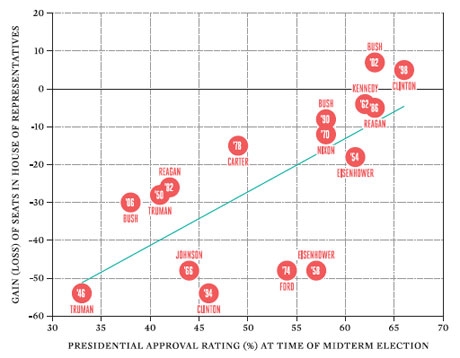 The Democrats, however, currently have a 78-seat advantage in the House, meaning that it would take a 39-seat loss for them to lose control of the chamber. The over-under for how unpopular Obama would have to be in order to be more likely than not to cost his party those seats is not 50 percent — it’s probably more like 42 percent. Now, certainly, there’s some margin for uncertainty there: Dwight Eisenhower’s Republicans, in ’58, lost nearly 50 seats even though his approval was in the high 50’s. But the point is, there’s nothing particularly magical about Obama being above or below 50.

Recent trial-heat numbers, indeed, have shown Obama beating several Republican challengers by margins ranging from 5 to 15 points, even as his approval rating hovers around 50:

Against Sarah Palin, frankly, Obama could conceivably win re-election with an approval rating well into the 40’s and possibly even into the 30’s. He’ll have less margin of error, potentially, if the GOP nominates someone like Mitt Romney (although if I were a Republican strategist, I’d still be holding out hope for none-of-the-above). But again, there’s nothing particularly special that happens at 50 percent. Something like 45 percent, which is where Gerald Ford was when he lost to Jimmy Carter by two points in 1976, might be the more relevant number. A quick-and-dirty probit analysis, based on the dataset you see above and placing slightly more weight on recent elections, puts the breakeven number at 44 percent, and suggests that a President at 50 percent approval is as much as a 90 percent bet to win a second term:

As for that interview, incidentally, it was one of the more aggravating experiences that I’ve had in my brief “career” in politics. The host misread his teleprompter (that’s the generous interpretation), introducing me as someone who had correctly predicted “29 out of 50” states last November, and then recited a series of pre-spun questions, seeming flummoxed afterward that I hadn’t agreed verbatim with his talking points and complaining aloud that the very smart conservative who was supposed to have been on the panel with me (a last-minute cancellation) hadn’t been there (to “balance” me, I suppose). Then as I was leaving the studio past a huge trailer serving Johnsonville Brats, they launched into a segment about Britney Spears and Alzhemier’s. There was just no pretense of trying to do anything even vaguely resembling the news. I’m not reflexively anti-FOX; in fact, I’d had a couple of good experiences last year on Shepherd Smith and on their business channel. But as for their morning program: Wow. I’ve never met people more terrified of what might happen if they actually tried to engage in a rational discussion.