Figuring out who is going to run for president is a little like figuring out whom to date. Some potential candidates are honest about their intentions, and others are more coy. Is the person sitting across from you interested in a long-term relationship or just a fling? Is Rick Santorum serious, or does he just want a lucrative Fox News contract?

To try and find some answers, we’re starting a recurring “Will They Run?” feature. We’ll look at three variables:

The logic here is straightforward. We look at statements because some candidates are relatively honest about their intentions. We look at early-state events because actions speak louder than words: Almost all of the candidates on the ground in Iowa and New Hampshire in early 2007 and early 2011 ended up running in 2008 and 2012, respectively. And we look at the polls under the assumption that pollsters are close political observers with some idea of who is likely to run.1

We’ll score every potential candidate who has been included in at least one national poll since the 2014 midterm elections.2

Here’s what we get on the Democratic side: 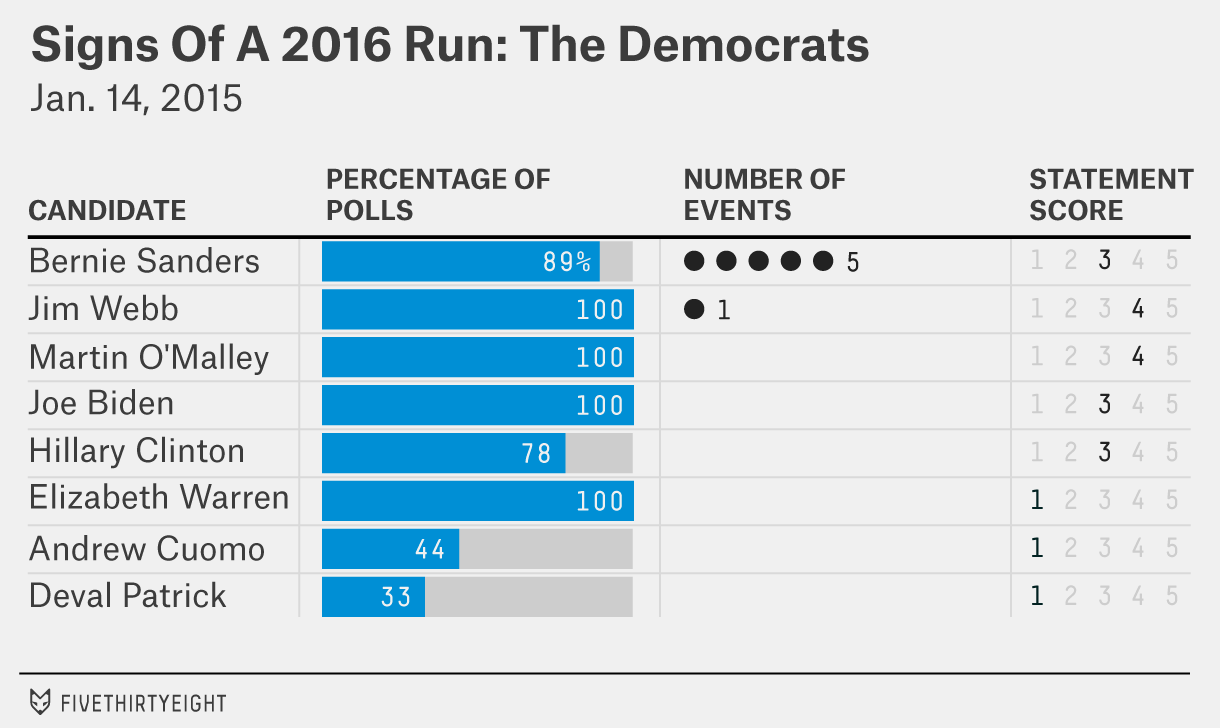 Martin O’Malley, Bernie Sanders and Jim Webb score highly on at least two of these measures. They have said they are “exploring” a run or are “actively looking at” a run. They have visited Iowa or New Hampshire since the midterm elections (or have a visit planned before the end of January). Perhaps most importantly, all three don’t seem to be basing their decision on what Hillary Clinton does.

Someone who I think will only run if Clinton doesn’t is Vice President Joe Biden. He hasn’t visited any of the early states and hasn’t said whether he is running. But he has been included in every national poll.

Speaking of Clinton, everyone assumes she’s in, but she hasn’t made a peep one way or the other and hasn’t visited the early states recently. Pollsters have been hedging their bets as well, testing the 2016 Democratic field with and without her. I personally think Clinton is likely to run, though some caution is probably warranted.

On the other hand, Elizabeth Warren has been included in every poll, but she said Tuesday that she is not going to run. Warren had previously said that she “isn’t running,” and there’s a subtle difference between “isn’t” and “not going” to run. Expect Warren to be included in fewer polls.

On the Republican side, the picture is a lot more muddled: 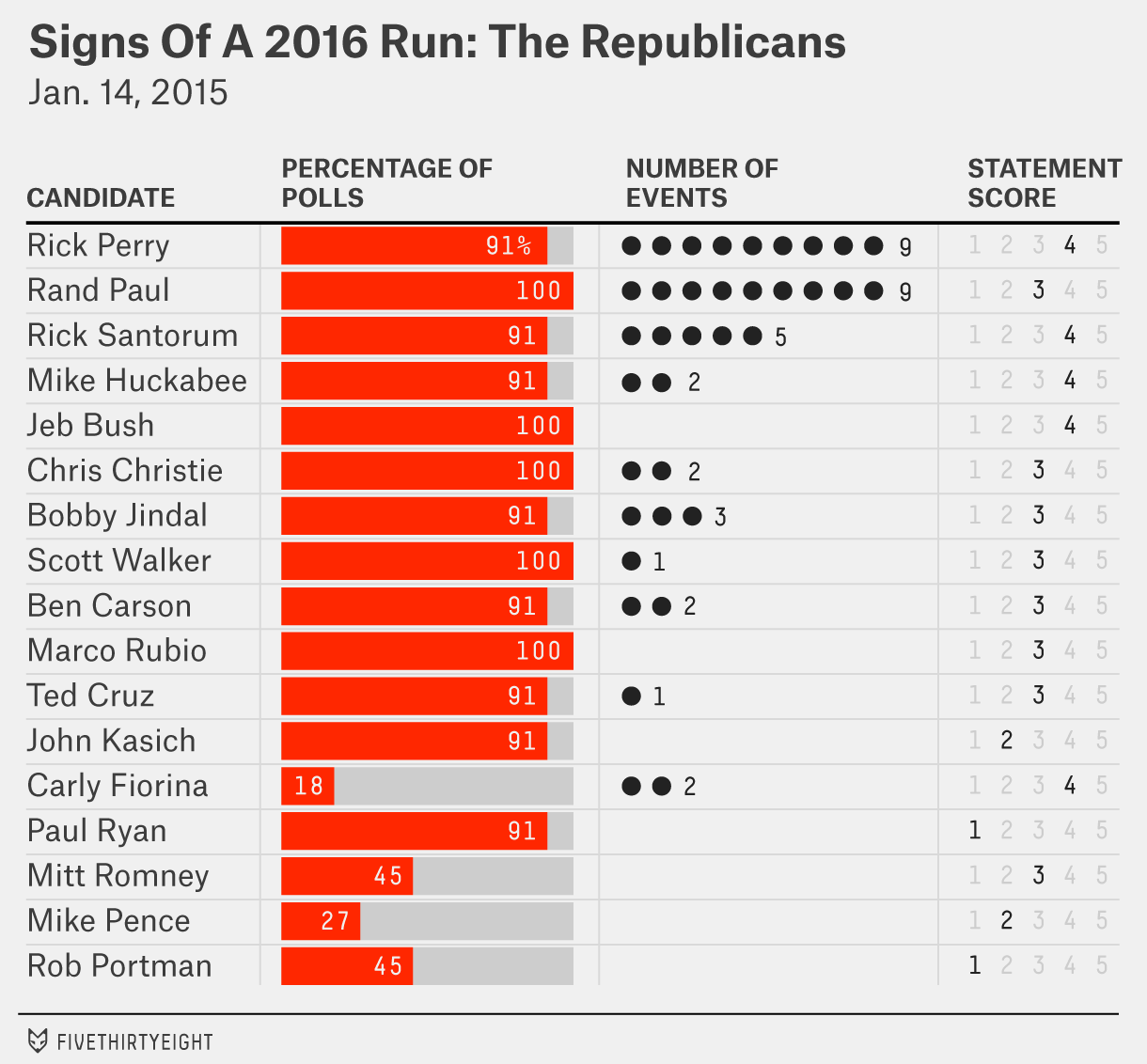 Jeb Bush, Mike Huckabee, Rand Paul, Rick Perry and Santorum have been included in the vast majority of polls, have said they are exploring a run, or have made visits to the early states. They seem more likely to run than not. That’s especially true of Paul, Perry and Santorum, who are already hitting the campaign trail hard.

I’m not sure about those just below this top group. Chris Christie and Scott Walker seem the most likely to run; they’re reportedly assembling campaign teams. Ben Carson, Ted Cruz and Bobby Jindal have been making visits to the early states, so we should take them seriously. Marco Rubio has said Bush’s run won’t impact his own, though I’m skeptical.

Pollsters seem to be a lagging indicator in the cases of Carly Fiorina and Mitt Romney. Both potential candidates have recently made campaign-related moves — even though the pollsters haven’t listed them in many surveys. Fiorina is visiting the early states and has said she’s considering a run. Romney has been quoted in The Washington Post as saying he will “almost certainly” run and is quickly putting together a campaign apparatus. (We list Romney as a “maybe” on our scorecard because he hasn’t made a public statement.)

Paul Ryan has said he is not going to run, and I’m doubtful John Kasich will (Kasich has basically said as much). Their inaction in the early states points in that same direction.

We plan to update these numbers regularly and see how much of this changes. Just in the course of writing this article, Ryan and Warren declared they weren’t running, and Romney’s efforts became more serious. The race to the White House is only now beginning.

Dhrumil Mehta contributed to this article.