In preparation for the 2015 NFL season, FiveThirtyEight is running a series of eight division previews, each highlighting the numbers that may influence a team’s performance (including projections and rankings based on ESPN’s preseason Football Power Index). Today we turn to the AFC South — perhaps the most imbalanced division in football. Andrew Luck’s Colts are potentially the league’s best team; the Texans, Jaguars and Titans are just hoping to keep things competitive.

Steadily, the Indianapolis Colts are climbing toward the Super Bowl. In Andrew Luck’s first two seasons under center, the team went from out of the playoffs to the wild card game in 2012 and then to the divisional round in 2013. And in 2014, a third straight 11-win season yielded a trip to the AFC Championship game. Now, the Colts enter 2015 with the AFC’s best chance (25.6 percent) of making Super Bowl 50, according to ESPN’s Football Power Index (FPI).

But as much as that probability attests to Indy’s progress as a team, it’s also an indictment of the rest of the AFC South. Luck is the division’s only top-tier quarterback, the Colts are its only top-15 preseason FPI team, and Indianapolis is projected to play one of the easiest schedules in the AFC. So while the Colts have the NFL’s best odds to win their division (73.4 percent) and make the playoffs (84 percent), merely getting to the postseason out of a weak division is no longer enough.

And in order for the team to reach the next stage in its ascent, Luck needs help. Last season, he was asked to do more than any other quarterback in the NFL, as the Indianapolis offense passed on 67 percent of its snaps. Saddled with that workload, Luck ranked first in touchdown passes but also 32nd (out of 33 qualified quarterbacks) in turnovers, with many of those miscues resulting from Luck trying to do too much.

To take the pressure off of Luck, the Colts need to improve their running game. Last season, Indianapolis ranked seventh1 in passing expected points added (EPA) per game but 29th in rushing EPA per game — the biggest such rankings disparity of any team in the NFL. The addition of running back Frank Gore is an upgrade over Trent Richardson,2 but the offensive line, patchy at best (with 11 starting combinations) a year ago, needs to open more holes after ranking 22nd in yards before contact per rush.3

As long as the Colts have a quarterback and the rest of the AFC South does not, they’ll have a successful season. In fact, with 10 games against what FPI considers the two weakest divisions in football (the NFC South and the rest of the AFC South), don’t be surprised if Indy earns the AFC’s No. 1 overall playoff seed.4 But if the Colts want to keep rising ever closer to the league’s summit, they can’t rely on Luck alone.

The Houston Texans are so defined by their best player that the latest edition of “Hard Knocks” should have been renamed “The J.J. Watt Show.” Last season Watt, the NFL’s reigning Defensive Player of the Year, became the first player since 19825 to post multiple 20-sack seasons in a career, and his impact goes beyond just pressuring the quarterback.

Watt led the league in batted passes,6 fumbles recovered and tackles for loss. Add in five total touchdowns (the most by a defensive lineman in a season since 1944), and it’s not surprising that Watt led the entire league in Approximate Value (AV), Pro-Football-Reference.com’s cross-positional player value metric. He’s also produced more AV through his first four seasons combined than any other defender since the common draft era began in 1967.

In other words, Watt might be the best player in football today. And with the Texans adding Vince Wilfork and a healthy Jadeveon Clowney to line up alongside him, Houston’s defense could be even more dominant than it was last season, when it ranked second in defensive EPA.

But will any of that matter if Houston’s quarterbacks can’t pass the ball?

While developing FPI for the NFL, ESPN’s Stats & Information Group needed a way to estimate each team’s quarterback quality for the upcoming season in order to account for QB injuries when making predictions. The solution: for each starting quarterback (and his backup), FPI generates a per-game EPA projection based on his past performance.7 In Houston’s case, starting quarterback Brian Hoyer ranks 27th out of 32 expected starters in projected EPA.8 Compared with an average starter, Hoyer is expected to cost the Texans about 2.9 points per game. To put that in perspective, if he were an average QB instead, the Texans would rise from 16th overall in preseason FPI to seventh (and fourth in the AFC).

There is good news for Houston, though: FPI projects its schedule to be the AFC’s easiest, with interconference games against the historically awful NFC South. Last season, the AFC North drew that division and ended up placing three teams in the playoffs.9 With that schedule and Watt spearheading the fourth-best projected defense in football (according to FPI), Houston might get back to the playoffs in spite of its poor quarterbacking.

It’s been four painful seasons since the Jacksonville Jaguars finished with a .500 record (they went 8-8 in 2010).10 During that span, the team has the worst record in the NFL (14-50) and hasn’t won more than five games in any season.

Unfortunately for the Jaguars, that record cannot be attributed to bad luck — they also produced an NFL-low 15 pythagorean wins11 — or a lack of draft picks. Despite Jacksonville picking in the top five of a record four consecutive NFL drafts, and having had at least one top-10 pick for eight years running, the talent gap between the Jaguars and the rest of the league continues to grow. And it isn’t likely to decrease in 2015: first-round pick Dante Fowler Jr. has already gone down with an ACL tear, while prized free-agent tight end Julius Thomas may be out until Week 4.

Jacksonville’s defense isn’t awful (more on this later), which might offer hope. But as any football fan knows, today’s NFL is all about the quarterback, and in order for the Jaguars to take steps toward respectability, they need Blake Bortles to improve on the NFL-worst 25.2 Total QBR he put up in 2014.

Based on an admittedly small sample, quarterbacks who start their careers as badly as Bortles has rarely get better. Going back to 2006,12 there have been eight passers13 (other than Bortles) who produced a Total QBR of 30.0 or worse through their first 13 starts.14 After such rough debuts, the octet combined for a winning percentage of 38.1 and an average Total QBR of 29.7 in their subsequent starts; only Mark Sanchez started more than 16 additional games.15

Maybe the aforementioned Jaguars defense can come to Bortles’s aid. It ranked 17th in the NFL in EPA per play17 and held opponents to the league’s 14th-lowest Total QBR last season. But even if the defense ascends into the NFL’s top 10, the offense will still likely be too much to overcome. That’s why FPI predicts that Jacksonville’s cycle of high draft picks will go unbroken, assigning the Jags a nearly 50 percent chance of picking in the top five for a fifth consecutive season.

Good luck finding a 2015 Tennessee Titans preview that doesn’t focus on the No. 2 overall pick in this past spring’s draft, quarterback Marcus Mariota. After a disappointing 2-14 season in which the Titans started three different QBs,18 the Titans and their fans are counting on Mariota to step in and revive the offense.

At least one projection system (full disclosure: it’s the one developed by my colleagues in ESPN’s Stats & Information Group) expects Mariota to be the top quarterback in his class by 2018, but there are bound to be growing pains as he adapts to the NFL. And even if we pretend Mariota has no trouble transitioning from the spread offense he operated with Heisman-winning efficiency at Oregon to Ken Whisenhunt’s more vertical, pro-style scheme, who is he going to throw to? And how will Tennessee’s rushers help take pressure off Mariota and the passing game?

Fantasy rankings have their flaws (for instance, a team might have two good players at the same position), but they can serve as a decent proxy for evaluating individual offensive talent. And they build a pretty convincing case that the Titans possess the least-talented group of non-quarterback skill-position players in the NFL.

For starters, Tennessee’s top-rated fantasy player — running back Bishop Sankey — ranks 95th in ESPN’s Fantasy Rankings,19 27 spots lower than any other team’s highest-ranked player. The rankings also assign a dollar value to each player (with replacement-level players20 receiving no value), and Tennessee’s entire roster of fantasy-eligible players21 is worth a whopping nine bucks. That’s the lowest of any team in the league — and $46 less than the value of Pittsburgh running back Le’Veon Bell, the most expensive player in ESPN’s rankings. 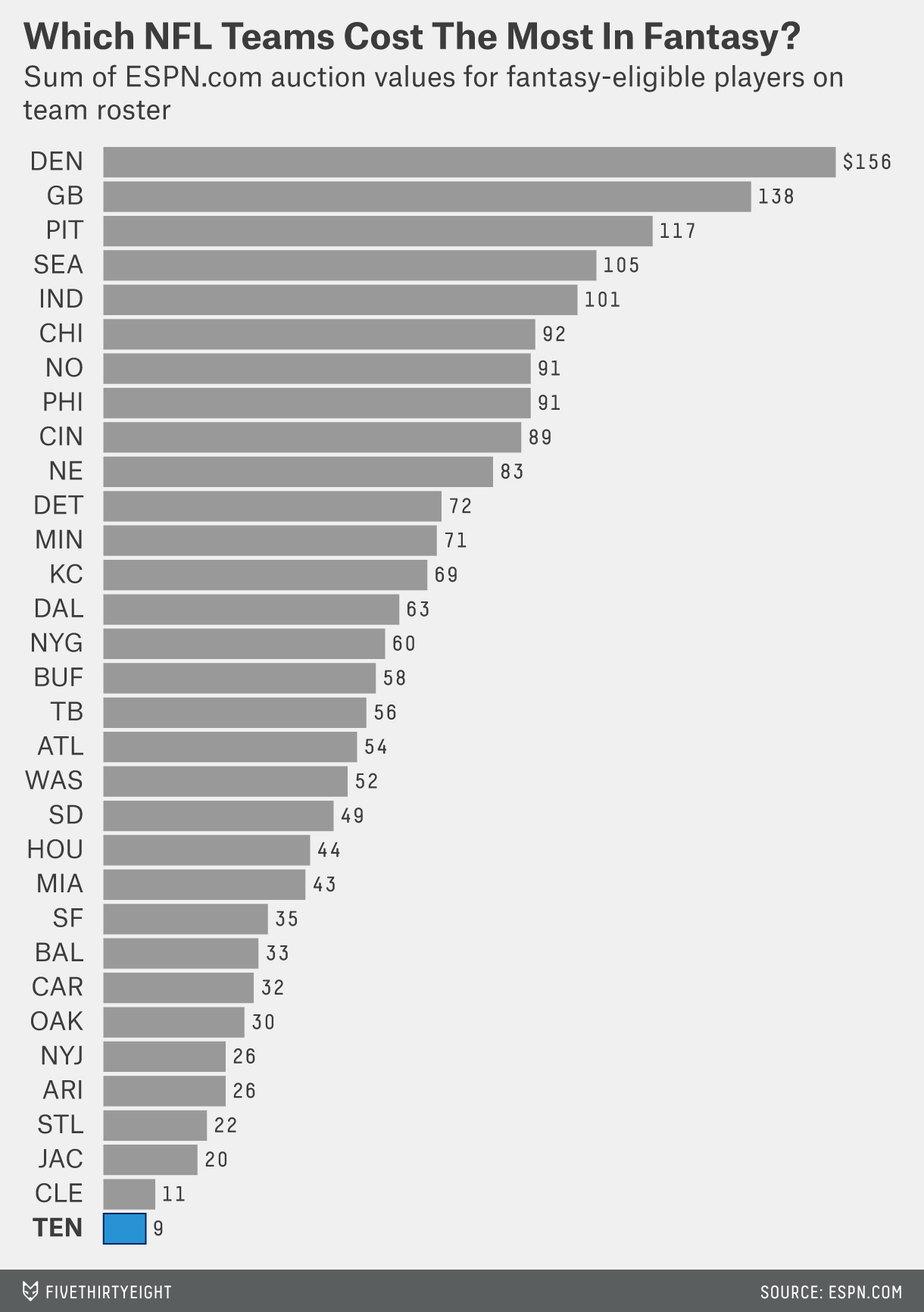 After ranking 30th in offensive EPA per play22 (and 29th defensively) last season, the Titans would truly need a “Super Mariota” performance to elevate this group into playoff contention. So though Mariota is getting all the headlines, the true determinant of Tennessee’s success may be whether any other player can step up to take some pressure off of its rookie QB.