In preparation for the 2015 NFL season, FiveThirtyEight is running a series of eight division previews, each highlighting the numbers that may influence a team’s performance (including projections and rankings based on ESPN’s preseason Football Power Index). Here we take a look at what’s going on in the NFC South through the lens of the salary cap.

“When you come into a season, every fan thinks that their football team has a chance to win the Super Bowl, and that’s what I believe the 32 clubs are working towards.”

The NFL prizes parity, and the 2014 NFC South had loads of it. Every team finished below .500, no team was eliminated until Week 14 (Tampa Bay, at 2-11) and a division winner wasn’t determined until a Week 17 lose-and-go-home battle. If you squinted just right, it had the appearance of exciting football.

In a twisted way, 2014 was a continuation of years of the division’s parity. During the last 13 seasons, New Orleans, Atlanta and Tampa Bay have won three division titles apiece, Carolina four. Going into 2014, Adam Schein of NFL.com touted it as the league’s “most entertaining division” simply because it was so balanced that there was no clear favorite. Balance is overrated.

The biggest instrument in the NFL’s quest for parity is the salary cap, in which the more a team pays for its strengths the more it (generally) exposes its weaknesses. The NFC South has three players — quarterback Drew Brees, defensive end Charles Johnson and defensive tackle Gerald McCoy — who will be the biggest cap hits in the NFL in 2015 at their positions. Let’s take a look at each team’s biggest obligation.

One basic issue with NFL parity: If a team wants to win a Super Bowl in today’s league, it pretty much has to have a great QB. There are maybe 10 of these QBs on the planet, but 32 NFL teams. If your team is lucky enough to have a great QB, it’s probably paying him a huge amount of money. If your team doesn’t have one, it’s likely waiting to win some sort of QB lottery, gambling on either a high-pick rookie or an aging free agent (even one who, thanks to two neck surgeries, still can’t feel his fingertips).

This year’s league includes several Hall of Fame QBs, and Matt Ryan is probably not one of them. But he is good enough for the Falcons to win a championship.

It’s impossible to reduce every component of a QB’s performance into a single number, but adjusted net yards per attempt (ANY/A) does a fine enough job, showing the strongest correlation with wins among common statistics.1 The chart below ranks each team’s QBs (with a minimum of 10 starts) by ANY/A, from 1990 through 2014. 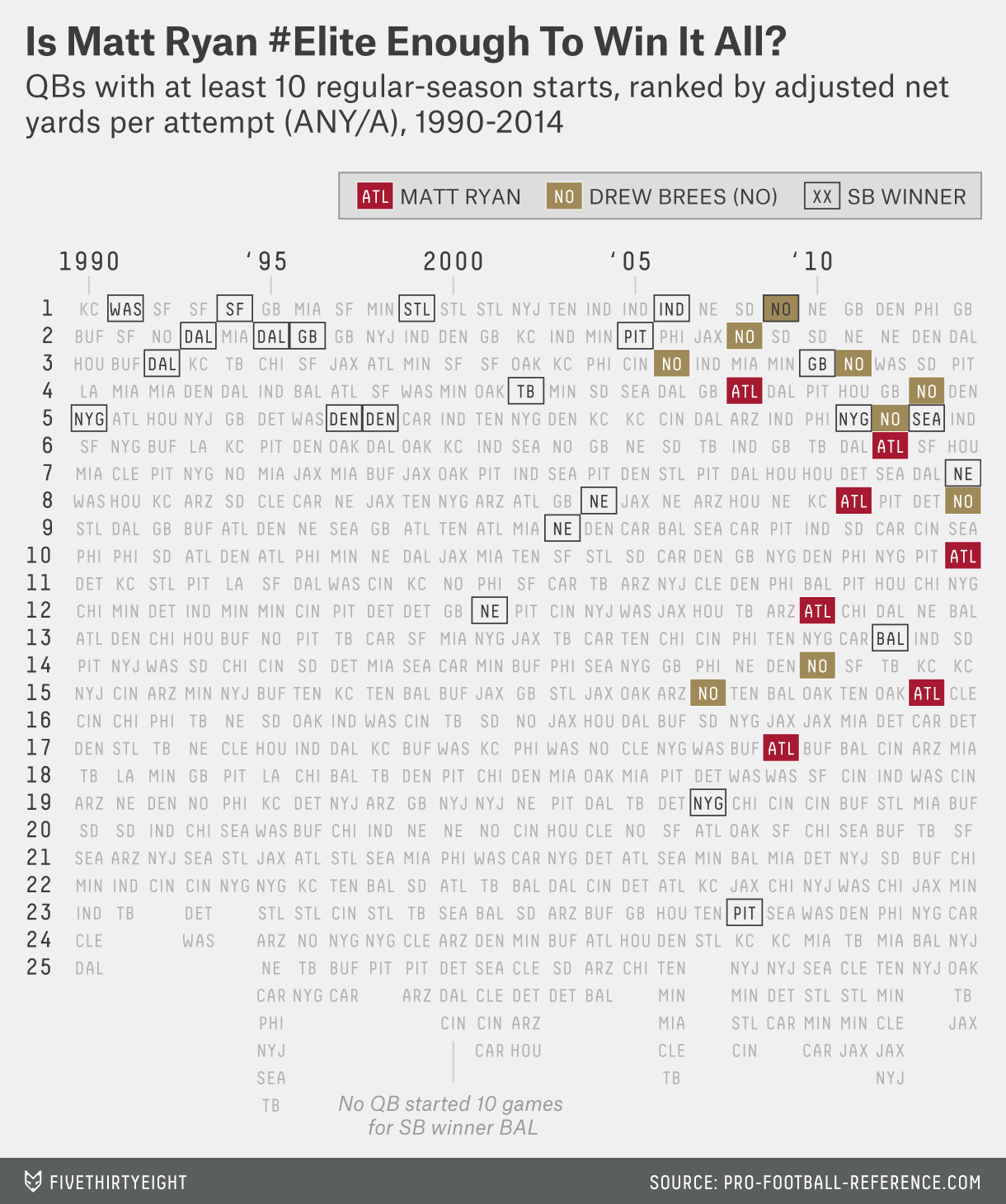 Twenty-one of the last 25 Super Bowls went either to QBs who had one of the top five ANY/A performances that season or to Tom Brady, whose career ANY/A is the fourth highest of all time.2 Ben Roethlisberger had a championship in a down year, and borderline “elites” Eli Manning and Joe Flacco add one each. That leaves just one QB in the past 25 years, Trent Dilfer of the 2000 Ravens, who won a ring despite being a bad — or even just mediocre — quarterback.

So is Matt Ryan, who has a top-10 ANY/A in four of the past seven seasons, Super Bowl material? Sure! He’s no Drew Brees, but he was just a hair behind both Brady and Russell Wilson last year, and more often than not he’s close to being among the league’s best QBs. And that lukewarm recommendation is, in the QB-hungry NFL, enough to warrant a $19.5 million cap hit.

No NFL team spends as much of its cap on one player as New Orleans spends on Drew Brees. The QB has been one of the league’s best since he joined New Orleans in 2006, but in 2015 he’ll have lost most of his favorite targets. He’s also 36. The latter puts him in rare company.

Only 38 QBs in NFL history have thrown 500 attempts after turning 36. Thirty-six of them also had at least 500 attempts from age 26 through 35, closer to a quarterback’s peak decade.3 For obvious reasons, these quarterbacks are some of the best in NFL history. It’s a group that includes 12 Hall of Famers and four presumptive Hall of Famers (Brady, Peyton Manning, Kurt Warner and Brett Favre).

To make sense of whether Brees, another all-time great, is due for a decline, let’s look at what happened to these quarterbacks’ ANY/A and interception rates after they turned 36: 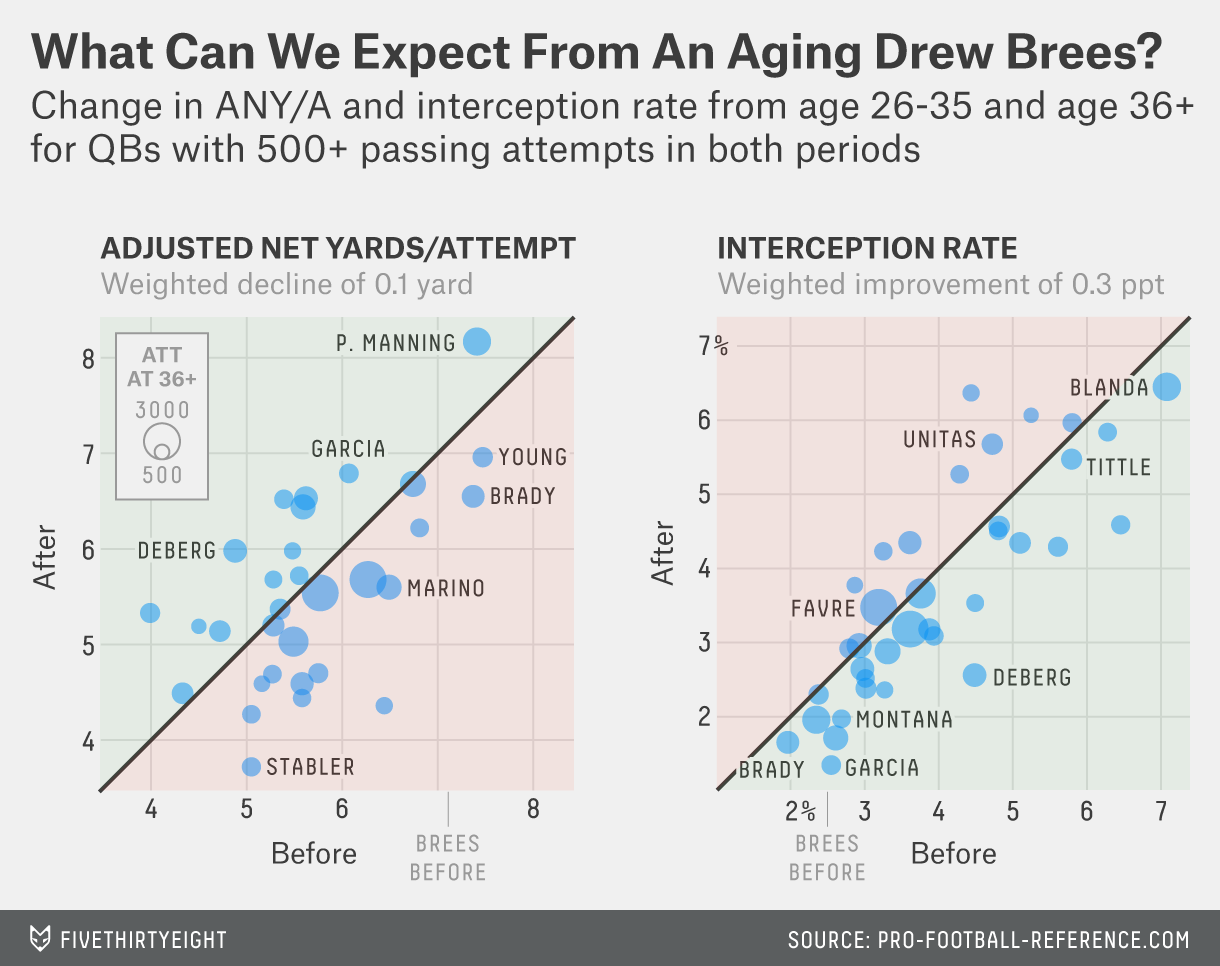 That’s … not much of a dip in performance. Weighting by attempts after age 35, the ANY/A of the QBs was basically unchanged. Interception rates improved by a decent chunk, 0.3 percentage points, which is around two fewer interceptions a year for a pass-friendly QB.

The 2014 Saints season was a mess, but Brees, despite an uncharacteristic 33-17 TD-INT ratio, was stellar as always. He’ll likely retire as the career leader in completion percentage, a lame consolation prize for an elite QB competing against Peyton Manning’s records and Brady’s titles, but if the Saints can stop stripping for parts for a few seasons, he may have another Super Bowl push in him yet.

Johnson4 is a solid defensive end — ProFootballFocus graded him as 11th in the league (among players who play in a 4-3) in 2014. Having a bad contract is not the same as being a bad player, but his is definitely a bad contract. But it’s not the Panthers’ most perplexing cap move in recent years. A year removed, let’s take a look at Carolina’s disastrous running backs.

That $14 million is a lot to spend on a backfield. The Seahawks, who led the league in rushing in 2014, spent $8 million on Marshawn Lynch but only about $1.5 million on other backs. In exchange for all these dollars, the Panthers were seventh in the NFL in rushing yards, with 127 per game. That sounds pretty good! Except their QB ran for more than a quarter of those yards, and the Panthers’ backs caught few passes in a league that’s relying more on QB play.

Let’s take a look at how much Carolina’s RBs really contributed. The chart below shows how much yardage each team’s 2014 running back corps (including fullbacks) contributed to team rushing and receiving. 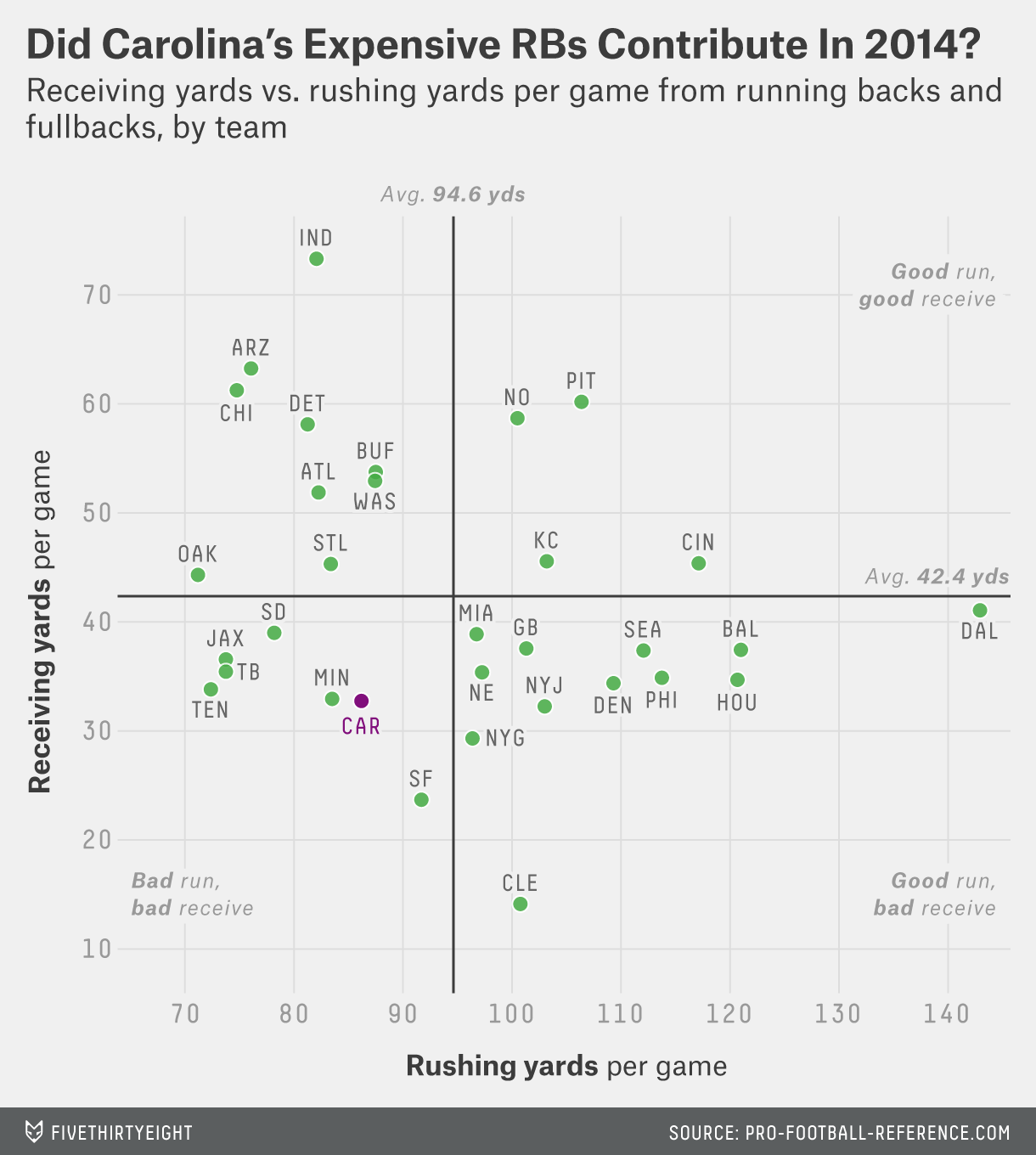 Carolina falls into that bottom left quadrant, teams whose running backs contributed below-average rushing and receiving yards per game. Neighbors include Jacksonville, Tennessee, and Tampa Bay — three of the NFL’s worst teams in 2014 — and Minnesota, whose star back, Adrian Peterson, was accused of child abuse and did not play after Week 1.

Williams is off the books in 2015, but Carolina is still spending almost $12 million in cap dollars on Stewart and Tolbert. The pair combined for 37 receptions last year. With WR Kelvin Benjamin out for the season, Ted Ginn Jr. is the team’s No. 1 receiver despite being a 30-year-old with five starts in the past five seasons. Behind him on the depth chart is someone named Brenton Bersin. The Panthers might need their RBs to catch some passes.

McCoy has made three straight Pro Bowls and is probably the best defensive tackle in the league (Pro Football Focus put him at second in 2014, first in 2013 and second in 2012). Thanks to his play, he’s gotten paid: 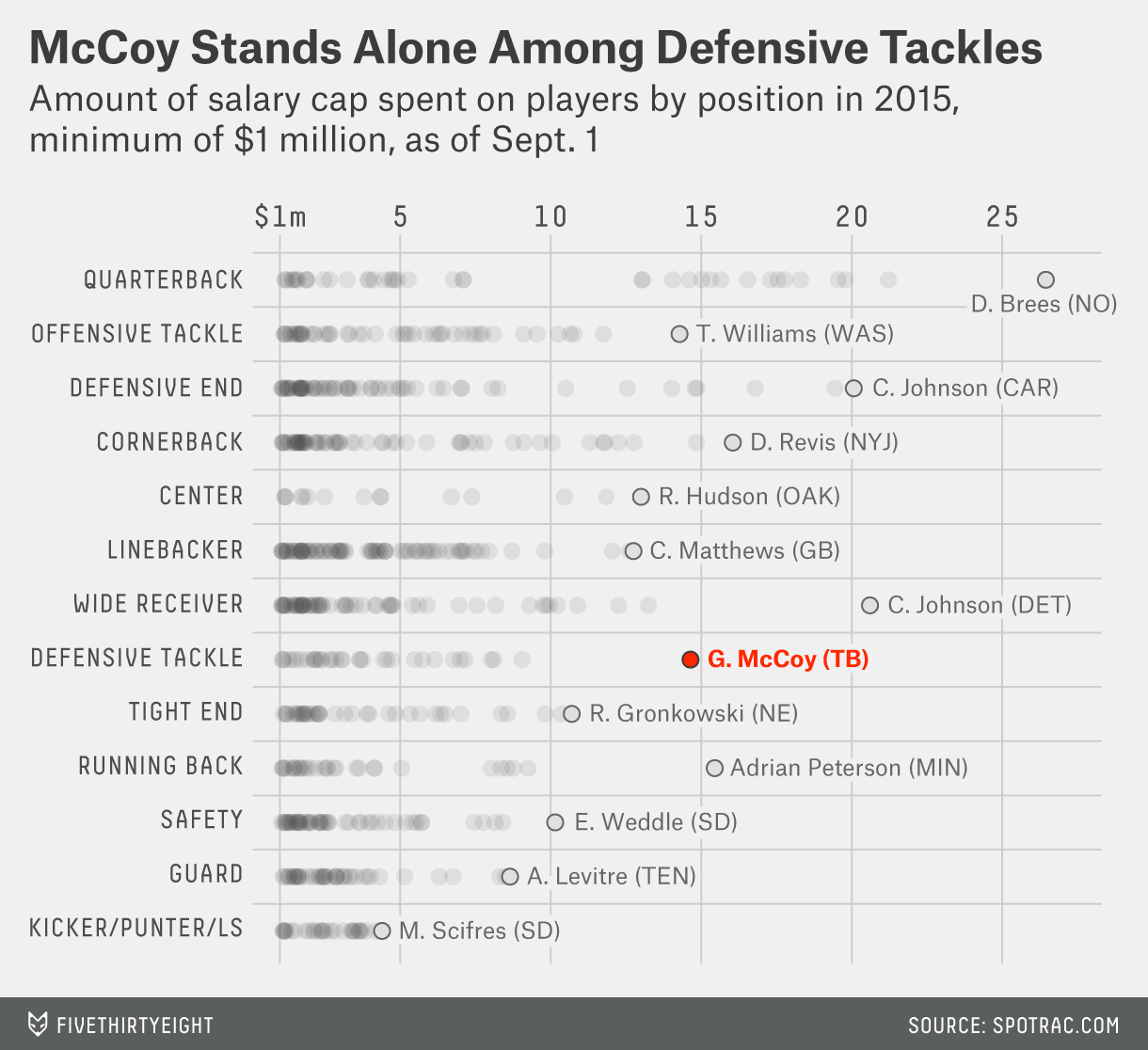 McCoy isn’t just the biggest cap hit at his position, he’s also an enormous outlier. The closest defensive tackle, the Bengals’ Geno Atkins, is paid $9 million per year. That’s a $5.6 million gap — only wide receiver Calvin Johnson ($7.4 million more than Demaryius Thomas) and running back Peterson ($6.2 million more than Matt Forte) are that far ahead of their nearest positional rivals. McCoy might not have the name recognition of those two stars, but he’s younger and closer to his peak.

Despite McCoy, in 2014 the Buccaneers defense ranked 28th in passing yards allowed, 19th in rushing yards allowed, 25th in points allowed and 21st in sacks. A single player can have only so much impact on a team’s defensive performance.

But McCoy is still a big part of the Bucs’ future. Tampa Bay isn’t realistically looking to win in 2015. Its path forward — into the tier of teams that legitimately contend for the Super Bowl each year — is a bet on top pick QB Jameis Winston. If he pans out, the Bucs will aim to contend a few years down the line, with McCoy as a cornerstone of a defense that’ll look very different than it looks today.

Read more: What To Expect If You’re A Packers, Lions, Vikings Or Bears Fan