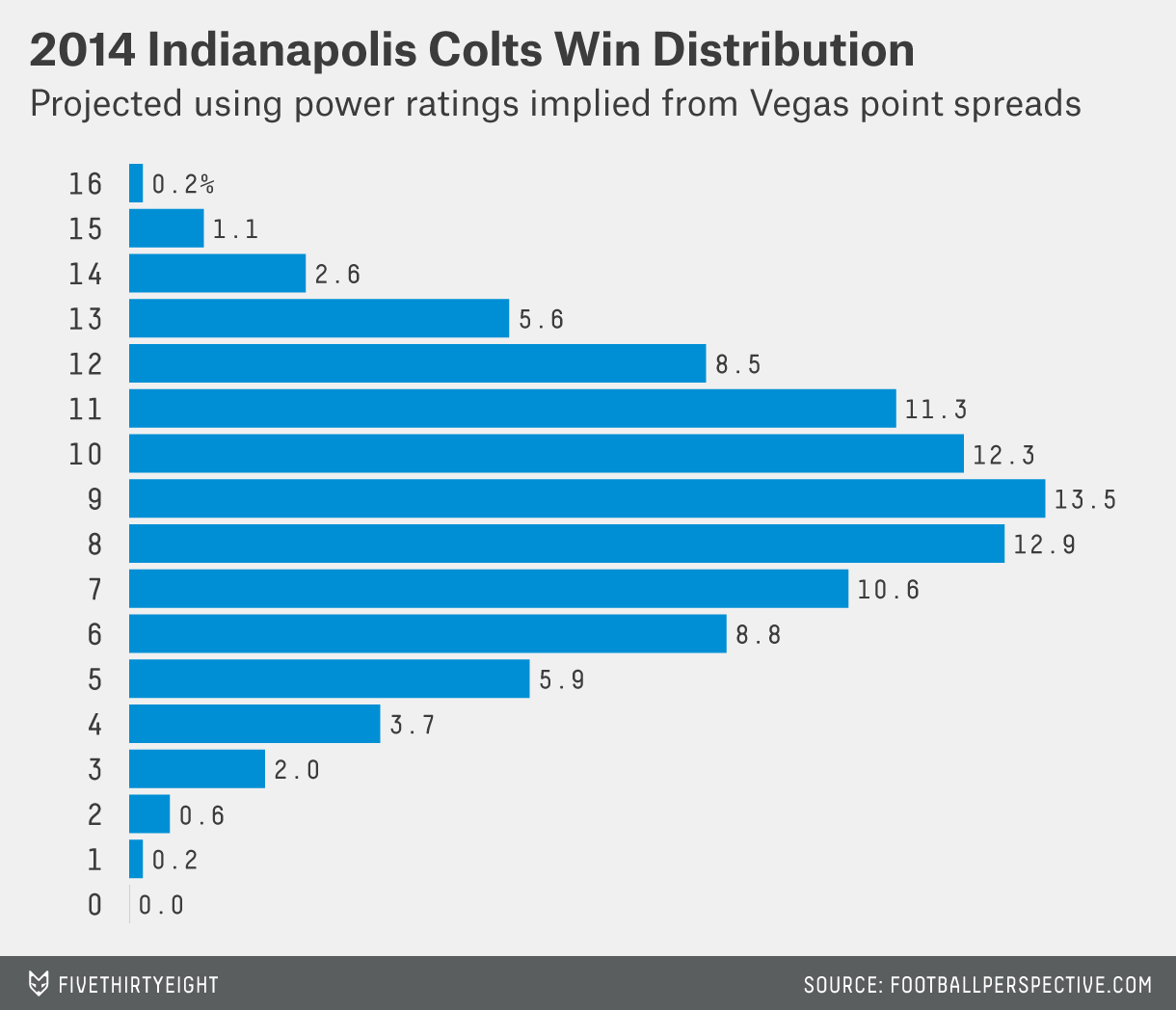 Over the last two seasons, Indianapolis has gone 22-10 and outscored its opponents by just 25 points. That’s a worse differential than the Pittsburgh Steelers (+31) and San Diego Chargers (+48), both of whom have gone exactly .500 over the same span. Winning close games may itself be a skill, but it’s pretty clear that the Colts are a relatively mediocre team as far as good teams go, and this makes them the perfect candidate to reign as champions of the terrible AFC South.

In 2013, the teams in the AFC South tallied 24 wins and a .375 winning percentage overall, which is even worse when you remember that each of these teams plays the others twice, so the division is guaranteed 12 wins.1 Here’s a list of divisions that were worse than the 2013 AFC South by winning percentage, since the NFL introduced divisions in 19662:

That’s it. That’s the list. The Colts are the favorite to win the trash heap again in 2014, largely because everyone else is worse than them and Andrew Luck will probably improve.

But don’t forget about Reggie Wayne! Until Wayne tore his ACL against the Denver Broncos in Week 7 last year, he had played in 189 consecutive Colts games. During that streak, which began in 2001, his rookie season, he quietly positioned himself as one of the most productive receivers in the modern era.

We can see Wayne’s dominance through the stat Expected Points Added (EPA) from Advanced Football Analytics, which calculates the net impact a player has on his team’s likelihood of scoring. Sum up the EPA for a player’s snaps over a season or career — it’s an accumulating stat, not a rate stat — and you get a good sense of who’s making the biggest difference to his team. Advanced Football Analytics has EPA going back to 1999. Since then, 722 receivers have debuted in the NFL, and just seven of them have accumulated 400 career EPA during the regular season. Wayne has accumulated 606. 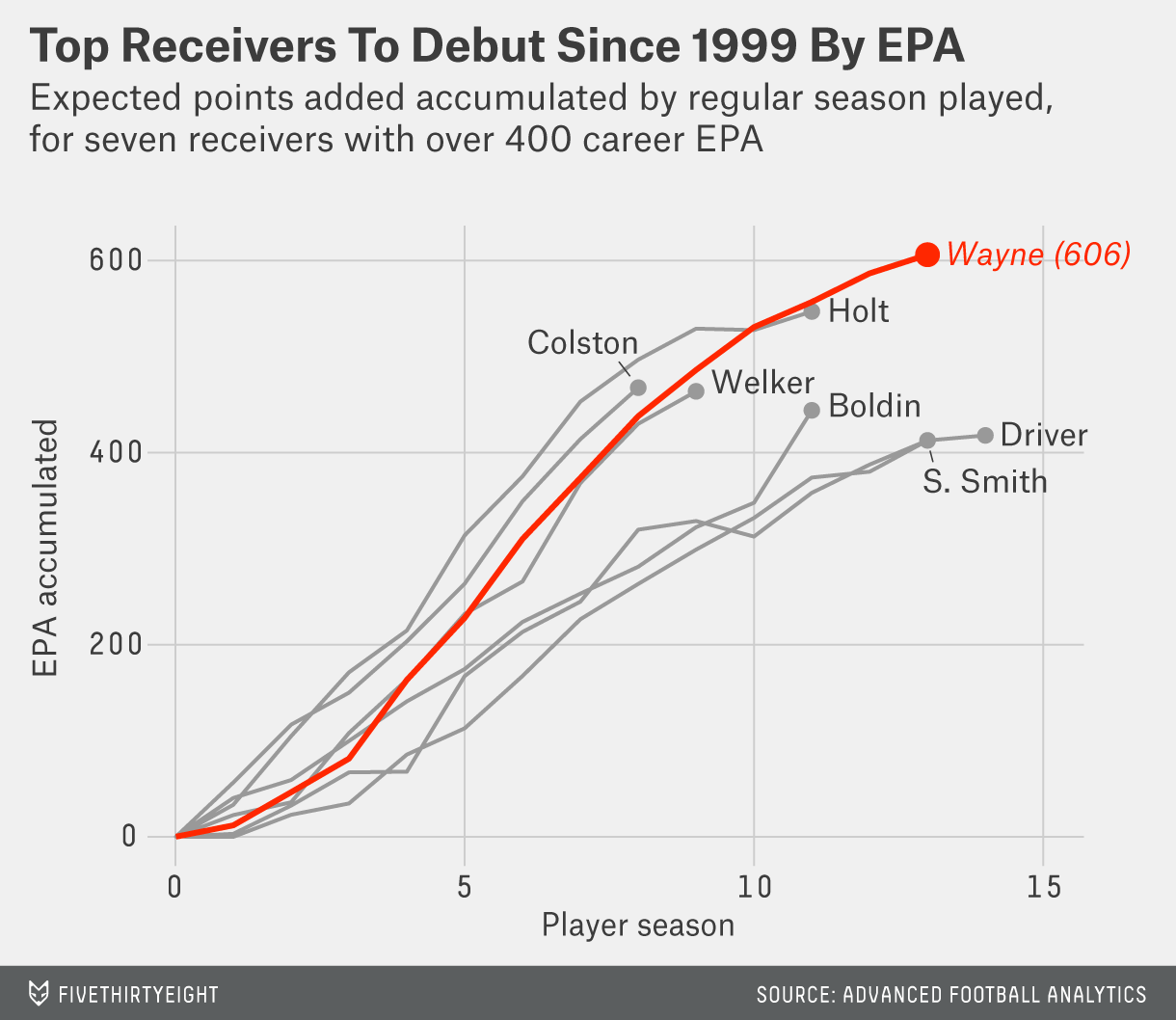 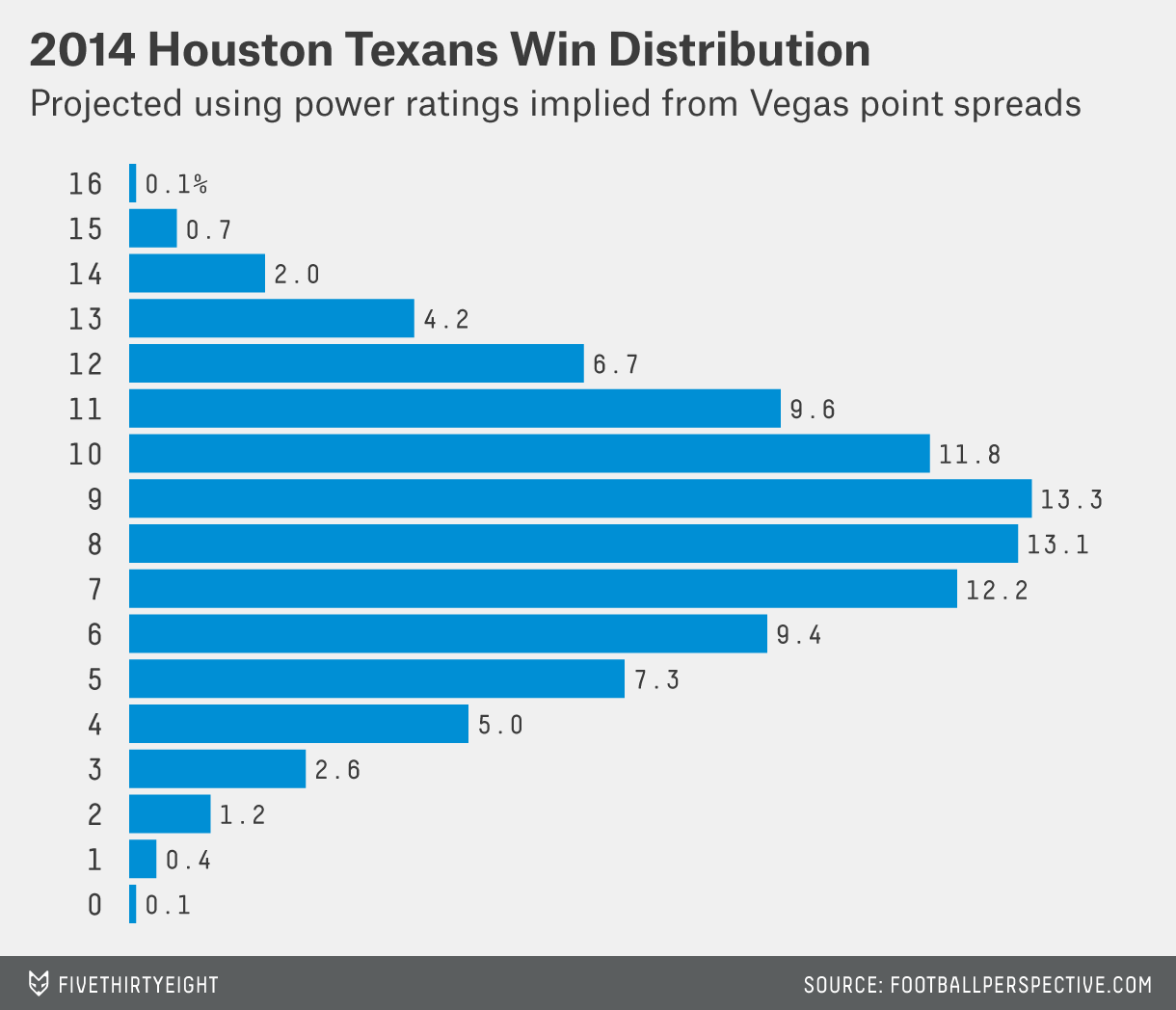 Vegas is bullish on the Texans in 2014 (45 percent chance to make the playoffs!), despite a 2-14 record last year, 14 straight losses, and a last-place finish. Houston clearly underperformed, but it’s not like the Texans revamped much in the off-season: Andre Johnson and Arian Foster are both a year older, Owen Daniels and Ben Tate are gone, and the quarterback du jour is Ryan Fitzpatrick, who has been cut by both the Tennessee Titans and the Buffalo Bills.

But who cares about the offense? The Texans’ hopes this season lie in the enormous hands of two enormous men: 2012 Defensive Player of the Year J.J. Watt and rookie Jadeveon Clowney. Both defensive linemen saw regular double-teams last season. Now they get to combine their powers.

Watt is an outstanding lineman in every regard, but his signature move is the batted pass. According to ESPN Stats & info, Watt had four batted passes his rookie year, while Jason Pierre-Paul and Calais Campbell led the league with eight. The next season, Watt had 16. This defensive focus was a pretty brilliant innovation, considering the steps that go into a successful NFL completion:

Recent NFL rule changes have made it much harder for defenders to disrupt Steps 1 and 3 (and stopping receivers may be even harder in 2014). So why not take a shot at Step 2?

The Texans aren’t the only defensive line to focus on blocking passes, but they’re by far the most successful. The chart below shows the number of batted passes for each team in the league, since 2011. 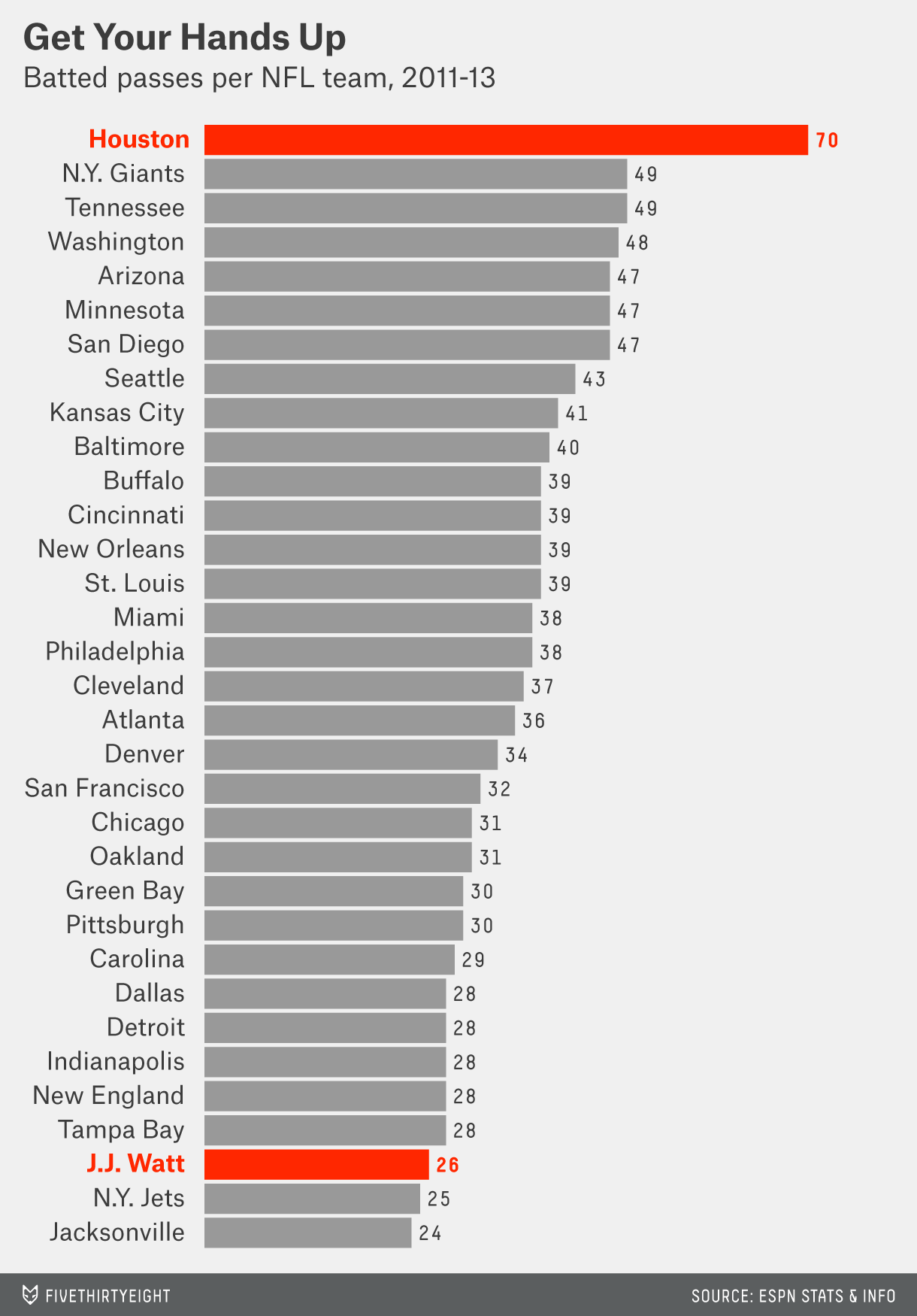 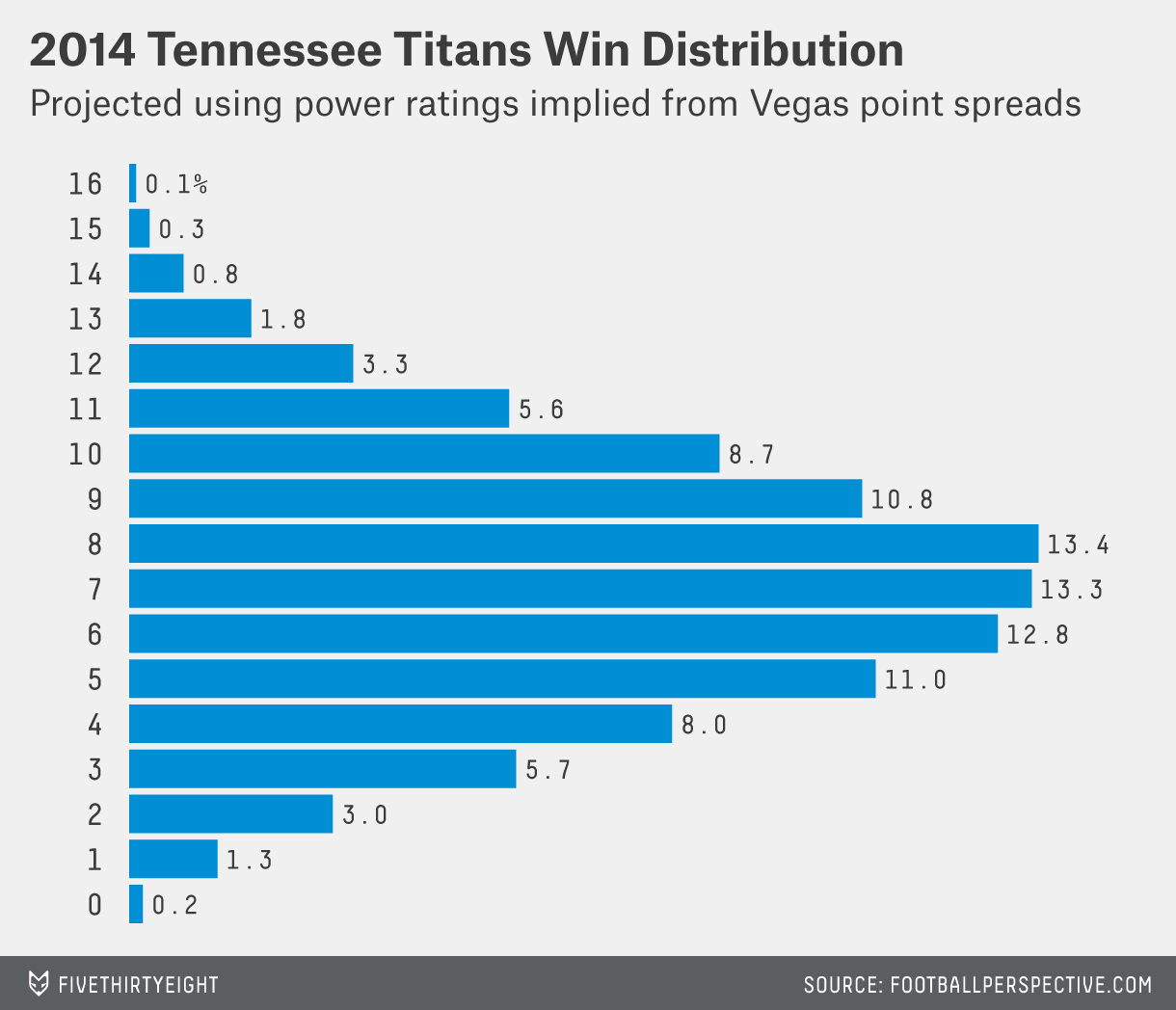 With records of 9-7, 6-10 and 7-9 the last three seasons, Tennessee has fallen into a cycle of inescapable mediocrity. One reason the Titans have been in limbo — maybe the biggest reason — is that QB Jake Locker keeps getting injured, be it his foot, hip or shoulder (on top of injuries to his ribs, thumb and neck from his college career). Locker has been the Titans’ opening-day starter the last two seasons, but has started only 18 games.

To help protect Locker, who is still their quarterback of the future, the Titans gave a four-year, $20 million contract ($9.5 million guaranteed) to right tackle Michael Oher, formerly of the Baltimore Ravens. The homecoming for Oher, a Tennessee native made famous by Michael Lewis’s “The Blind Side” and the subsequent movie, is a feel-good story for everyone involved, even if Oher no longer technically plays on the blind side. Except for one thing: Oher isn’t a particularly good NFL tackle.

This isn’t to say he’s terrible — terrible players (usually) don’t keep getting snaps, and Oher’s taken over 5,000 at tackle during the regular season — but he’s certainly below average.

Oher entered the league in 2009. Since then, according to Pro Football Focus (subscription required), 77 tackles have taken at least 1,000 snaps as pass blockers. The histogram below shows how often these pass-blocking tackles let their quarterbacks take a hit on the play. 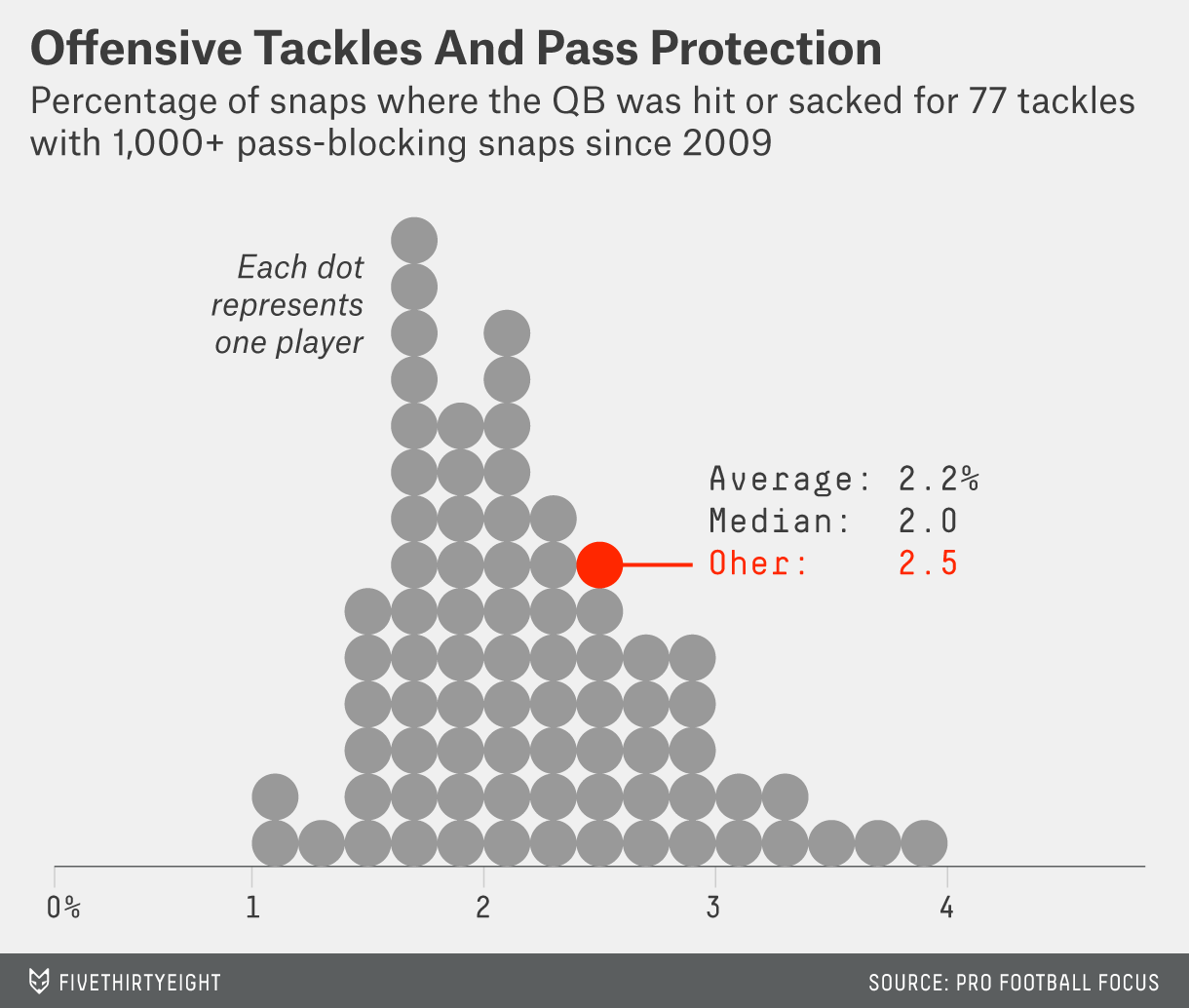 A player doesn’t want to be on the right side of that distribution. Lines with the median tackle allowed a QB hit on 2.0 percent of pass-blocking snaps. Lines with Michael Oher allowed hits on 2.5 percent of snaps, an additional hit every 200 snaps. He’s far from the worst in this metric — that would be David Diehl, whose lines allowed a hit on Eli Manning on 4 percent of snaps — but 58 of these 77 tackles had a better figure than Oher.

What’s more, Oher commits a lot of penalties while trying to protect the quarterback. For the same 77 tackles as above, the histogram below shows the penalty yards received per 100 snaps (both rushing and passing): 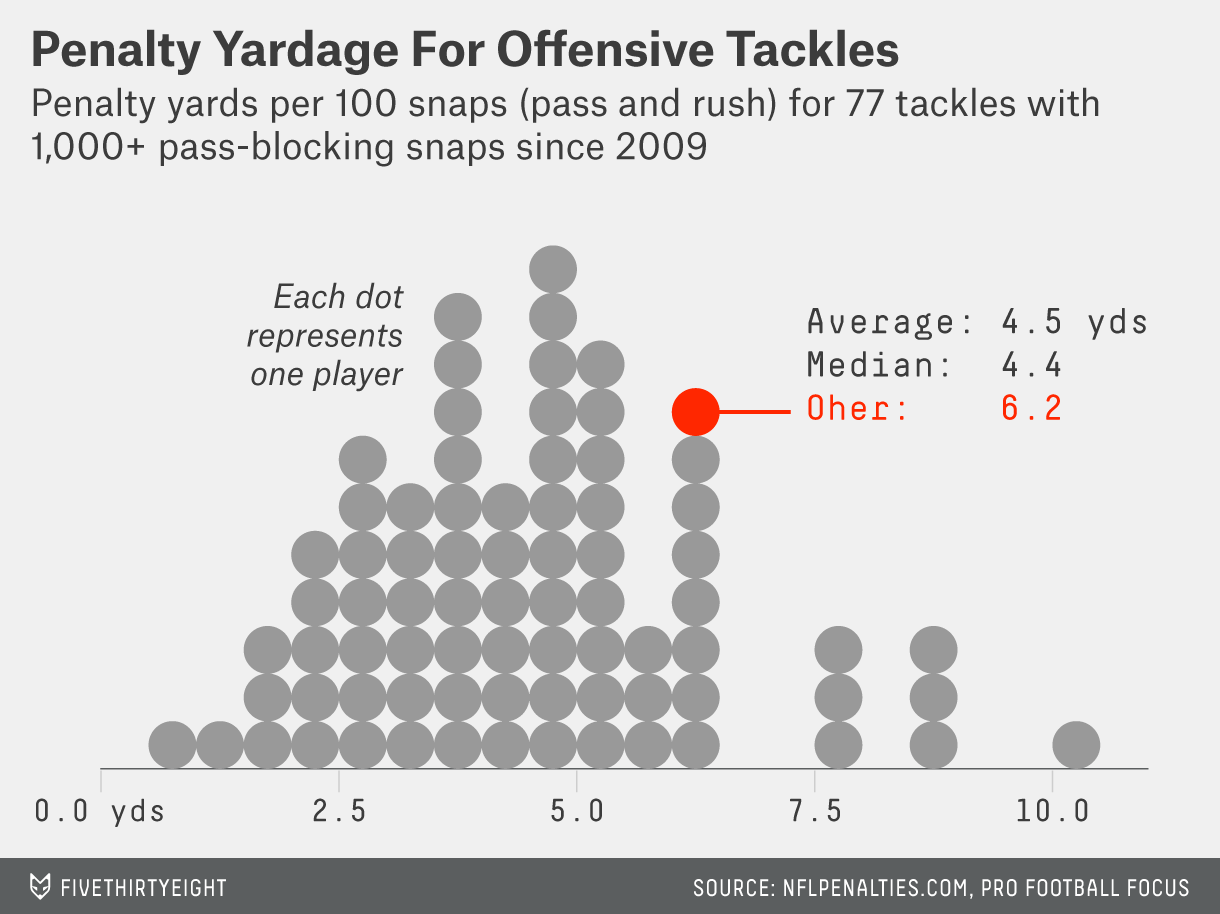 Oher has even worse marks here, averaging 6.2 penalty yards per 100 snaps against a median of 4.4 yards. Some 84 percent of the tackles in the data set did better, and only two — Jonathan Scott and J’Marcus Webb — had a worse penalty yard rate and QB hit rate than Oher. For a Titans squad that’s already floundering, this is not exactly an auspicious combination. 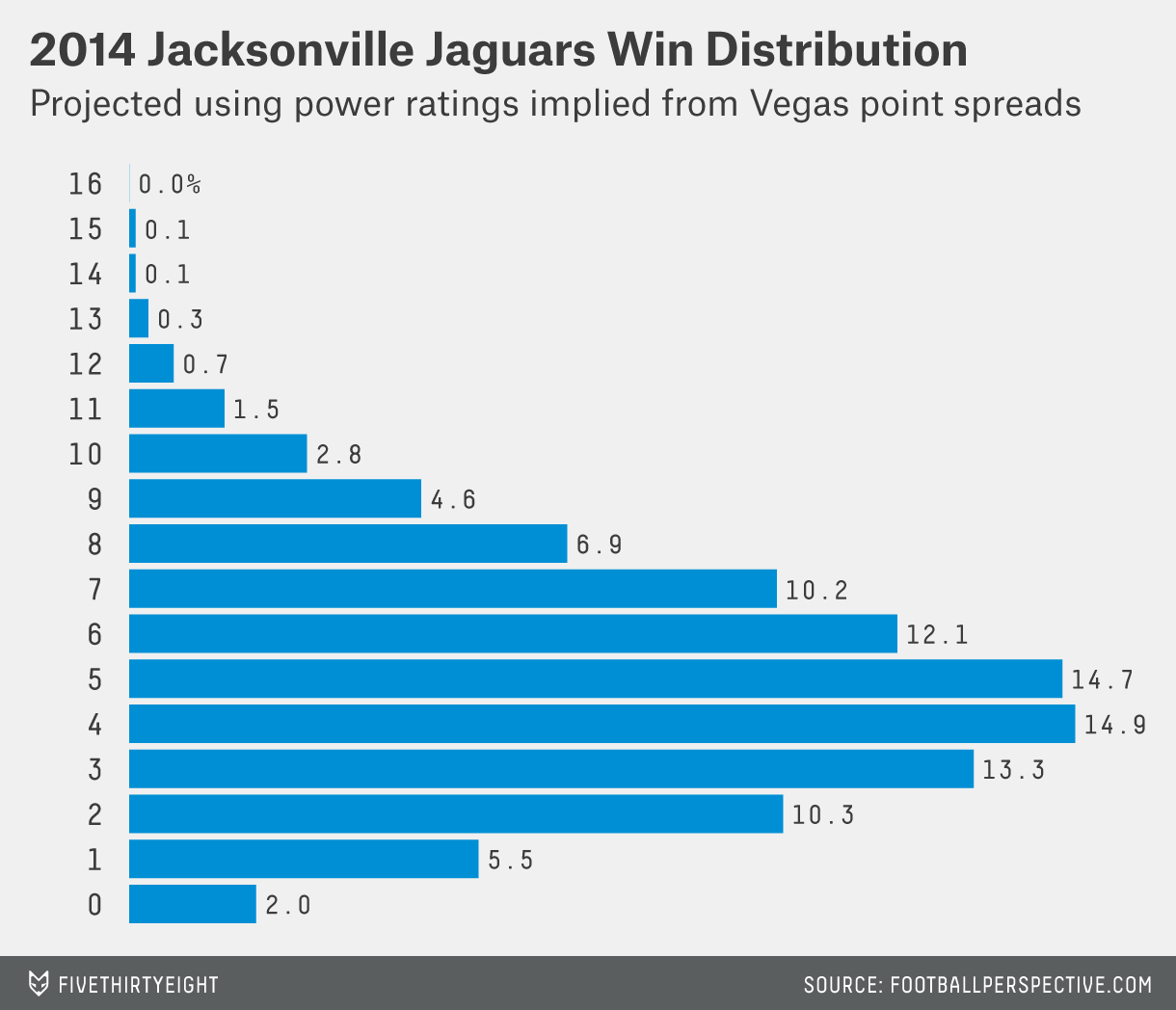 Last season was a disaster for Jacksonville, mitigated by a semi-competent second half. Through eight games, the Jaguars were 0-8 and had been outscored by a remarkable 178 points (more than 22 points per game). To compare, the 2008 Detroit Lions — the only team to go 0-16 — were outscored by “just” 102 points through eight, and the 1976 Buccaneers — the worst NFL team ever4 — were outscored by 109.

Unfortunately for rubberneckers, Jacksonville finished the season 4-12.5 The team hopes to improve on that win total this season, but it must do so without bowling-ball-shaped running back Maurice Jones-Drew, the best player the franchise has had in the last decade. He’ll be replaced by Tobinbo Gunnar Gerhart, who’s spent his four-year career backing up Adrian Peterson in Minnesota. Will Gerhart be any good?

From 2010 through 2013, Gerhart had 276 rushing attempts for the Vikings, and gained 1,305 yards. That works out to 4.73 yards per attempt, and if that sounds good, well, it is. The table below ranks running backs by yards per attempt through age 26 (post-merger, minimum four seasons played and 250 attempts). Gerhart is certainly worse than Peterson, but he still makes the top 30 out of 351 qualifying backs. 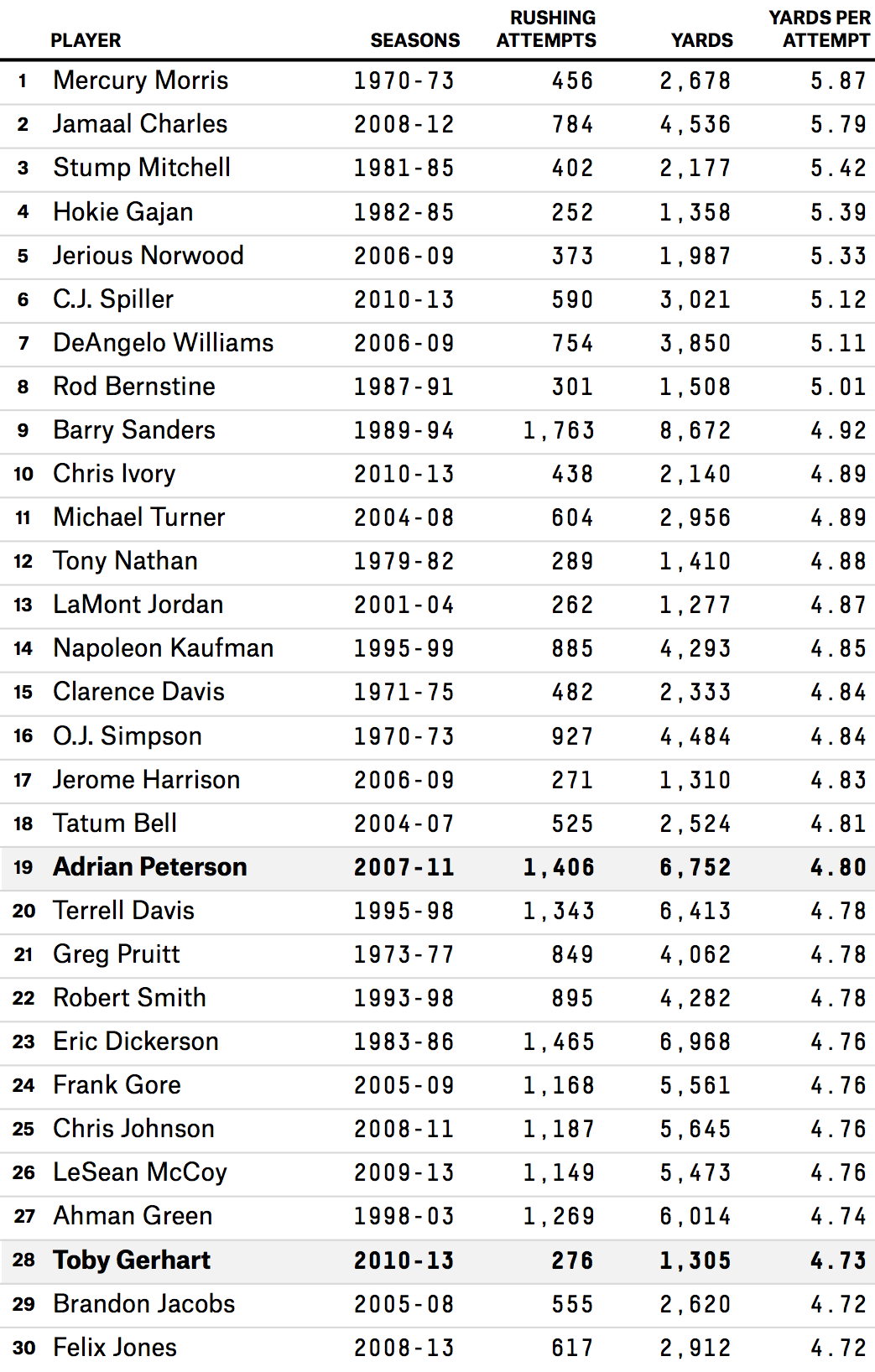 There are a couple red flags on this list — Mercury Morris and DeAngelo Williams dropped off pretty sharply after age 26 — but Gerhart also compares favorably to LeSean McCoy and a young Frank Gore.

Gerhart isn’t just racking up yards on tired fourth-quarter defenses. In nine games where’s he’s seen a heavier load (10 or more carries), he’s run for 697 yards on 148 attempts, or 4.71 yards per attempt. He also hasn’t gotten an enormous lift from his Minnesota teammates. By Football Outsiders’ adjusted line yards statistic — which measures the offensive line’s contribution to the running game — the Vikings’ line placed 11th, 18th, 10th and 10th in the league since 2010; generally above average but by no means dominant.

The Jaguars’ line, during the same span, placed second, 13th, 17th and 31st — meaning it’s yet another element of the game that has gone to hell in Jacksonville the last few years.6 Expectations are low in 2014, but if the offensive line can get it together, Gerhart just might be a pleasant surprise.