USA Basketball head coach Mike Krzyzewski on Friday made his final cuts before the 2014 FIBA World Cup, slicing the team’s roster to 12 players. So we now know who will represent the Stars and Stripes in Spain next week. But how does this year’s edition stack up to previous versions of Team USA?

To measure this, I used Statistical Plus/Minus (SPM), a box-score-based metric that tries to estimate a player’s on-court influence per 100 possessions. (For current players, I’d normally use ESPN’s Real Plus/Minus, but for this exercise we also need numbers for players going back to the early 1990s.) By averaging together each player on a given team’s NBA performance in the seasons before and after a particular international tournament — both FIBA events and the Olympics — we can approximate how much talent each American roster had to work with. (The full rosters are in a table at the end of this post.) 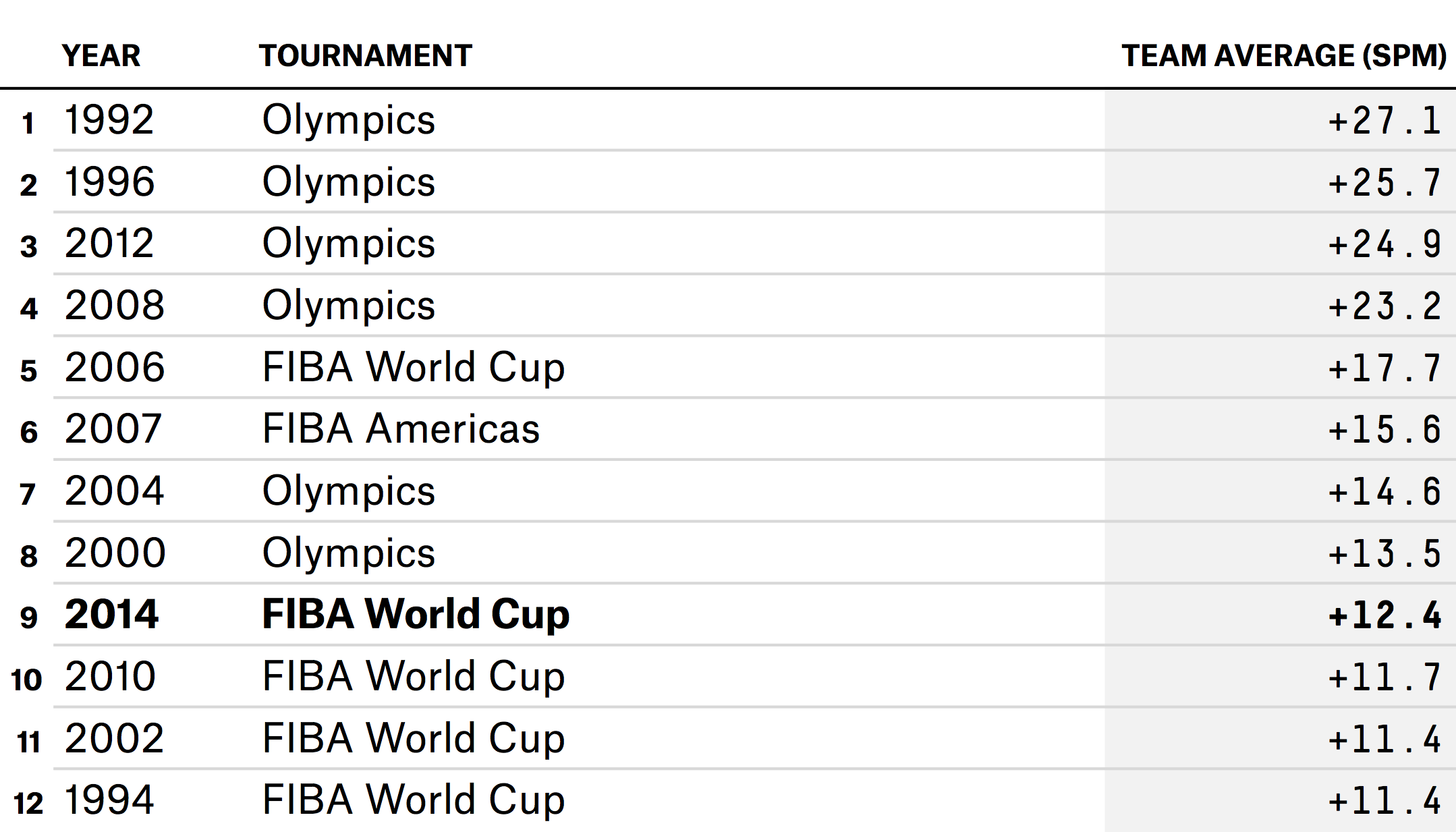 A few notes: For this year’s team, I used minutes from the 2014 Team USA exhibitions, excluding players who were cut. I also averaged the players’ 2013-14 performance with what we’d predict for 2014-15 using the rough SPM projection system we’ve employed over the summer. The 1998 team wasn’t included because few of its players were in the NBA. Finally, Magic Johnson didn’t play in 1991-92 or 1992-93, so I used his SPM from 1990-91 and deducted 0.4 rating points per an aging curve I computed.

It comes as no surprise that the U.S. saves its best rosters for the Olympics. Including the fabled 1992 Dream Team at No. 1, each of the four most gifted American teams on our list were sent to the Summer Games, and the drop-off between No. 4 (the Redeem Team of the 2008 Olympics) and No. 5 (the 2006 FIBA World Cup squad) is substantial.

You can also trace USA Basketball’s twisting path over the last two-plus decades by looking at these team ratings. The 1992 and 1996 Olympic teams were every bit the powerhouses their reputations would suggest, but the 2000 and 2004 versions were considerably weaker, culminating in an embarrassing performance in Athens. (That 2000’s team still won gold, however narrowly, while the 2004 squad fell to bronze probably speaks to how much teams in the rest of the world improved in the intervening four years.)

The humiliation of 2004 would lead to a renewed commitment to American basketball dominance, headed up by the brain trust of former Phoenix Suns executive Jerry Colangelo and Krzyzewski, the Duke University coach. Unlike the U.S. teams sent to the 1994, 1998 and 2002 FIBA Worlds, the 2006 team (and the subsequent 2007 FIBA Americas team) was nearly Olympic-level in quality, and the 2008 Olympic squad was the best the U.S. had fielded since 1996 — the lessons of the weak 2004 selection were duly heeded.

This year’s team is of roughly the same quality as the 2010 FIBA Worlds team (the U.S. tore through that tournament without losing). There is no LeBron James or Kevin Durant on the roster, but Stephen Curry, James Harden, Anthony Davis, Kyrie Irving, DeMarcus Cousins and company still make for a formidable group. (Our projection, based on last year’s numbers, also considers Derrick Rose to be a below-average player, which may be badly underrating him if Krzyzewski’s impressions from the exhibition season are correct.)

This isn’t the best team the U.S. has ever had to offer, but it’s above the usual standards of FIBA World Cup fare, 2006’s vengeance-minded selection notwithstanding.