The Polls: Polling has been all over the place, with nonpartisan polling showing leads of as much as 9 points for Corzine and 6 points for Christie. The Pollster.com average now shows the race literally tied, weighing in at Christie 42.0, Corzine 42.0, and Daggett 10.1. Although Christie clearly lost ground for much of September and October, some recent polls — notably PPP, SurveyUSA, and Quinnipaic — show a slight rebound for him in the closing days, perhaps as a result of voters who had previously been inclined to vote for the independent Chris Daggett (whose numbers have declined) coming back home. On the other hand, Monmouth shows some slight movement to Corzine, while Democracy Corps shows no trend with Corzine still ahead.

Analysis: Let’s turn to the 15 clarifiying questions that I posed earlier today and see how they apply in New Jersey. We’ll assign up to 3 points to one of the candidates in each category depending on the magnitude of their potential advantage.

1. Which candidate’s supporters are more enthusiastic? Although neither candidate has been particularly inspiring, Christie’s supports qualify as the demonstrably more enthusiastic, as PPP gives him a substantial 60-34 lead among those who describe themselves as “very excited” to vote. Christie +3 points.

2. Which candidate is liable to have the better turnout operation? New Jersey being something of a machine state, and Corzine being an incumbent who spares few expenses when it comes to getting out his vote, this is his potential ace in the hole. Corzine +3 points.

3. Is one of the candidates a challenger to an incumbent, who might benefit from the ‘incumbent rule’? The incumbent rule — the idea that undecided voters tend to break to the challenger — is disputed and seems to have become weaker in recent years. Nevertheless, if there were a race where it might apply, it could be this one. It may be noteworthy that Corzine has never polled above 44 percent in any individual poll; when the race tightened last month, it was more a matter of Christie losing ground than Corzine gaining it. Perhaps more tangibly, 53 percent of likely voters view Corzine unfavorably, according to Quinnipiac. That’s some difficult math to overcome. Christie +3 points.

4. Do the demographics of the undecided vote, or the weakly-attached third-party vote, favor either of the candidates? What seems to have happened is that the anti-Corzine Daggett vote has held fairly steady, whereas the hey-I-actually-like-this-guy Daggett vote, which was coming mostly from Christie’s column of “change” voters, has partially collapsed. Both PPP and Quinnipiac now show that a plurality of Daggett voters now have Corzine as their second choice. As I argued when Christie was the second choice of more Daggett voters, this is not necessarily hugely helpful — Daggett’s support may not collapse much further, and to the extent it does, a lot of voters may simply stay home rather than voting for one of the major-party alternatives. Still, it now seems clear that Daggett has no chance to win, and some voters who were worried about wasting their votes may switch, a dynamic that may provide a centimeter or two of help to Corzine. There also appear to be slightly more undecideds among Democrats than Republicans, which is also helpful to him. Corzine +2 points.

5. Which candidate got the more favorable coverage in the morning newspaper, or on the local evening news, on the Sunday before the election? One of Corzine’s staffers was allegedly busted for possession of ecstasy (people still do ecstasy?) over the weekend, although it’s not clear that he actually had anything to do with the Corzine campaign. Anyway, the local (NYC) news as I watched it yesterday focused more on Corzine’s appearance with Barack Obama, while Christie and Daggett were off doing more folksy kind of stuff (Daggett talking to tailgaters at the Jets game, for instance). Let’s call it a wash. Push.

6. Which candidate has the better ‘elevator pitch‘, particularly as encapsulated by the commercials they’ve run in the 48 hours before the election? Both candidates are still running mostly ticky-tack, negative commercials, but Christie’s show a few more flashes of positivity, and his closing argument — Corzine is a failed governor — is more concise and more likely to be remembered in the polling booth. Christie +2.

7. Which candidate has a headwind at their back from the national political environment, or has a message that squares better with the national political mood? Which candidate’s party is liable to have the better Election Night nationwide? It appears more likely than not to be a pretty good night for Republicans nationwide, and Christie’s anti-tax message — even if voters don’t particularly believe it — is more in step with the zeitgeist. Christie +2.

8. Does either candidate begin with a built-in lead from early or absentee voting? SurveyUSA shows Corzine with a 50-38 lead among the 14 percent who have already voted, which would translate into a 1-2 point head start for him as we head into Tuesday. It could be an early sign of Corzine’s superior turnout operation — but with that said, the sample sizes are tiny here and would be easy to overinterpret. Corzine +2.

9. Which candidate, if any, stands to benefit from upballot or downballot races? Since the governor’s race heads the ticket, this is unlikely to be much of a factor, but the Democratic state legislature in Trenton is deeply unpopular and is also up for re-election; I give a very slight edge to Christie for that reason. Christie +1.

10. Which candidate stands to benefit from cellphone-only voters, who may not be included in the polls? Generally, this will be the candidate who stands to win the majority of younger and more urban voters. That’s usually going to be the Democrat, although in this case, the advantage may be somewhat muted, since Corzine himself is a fair bit older than Christie and the polls show a fairly consistent distribution of the vote across age groups. Corzine +1.

11. Has the polling in previous elections in the state, or in similar elections in similar states, tended systematically to underestimate the performance of either candidate’s party? There’s this bit of conventional wisdom that Democrats close late in New Jersey, which actually may have happened here — win or lose, Corzine has made this a much closer contest than it looked like it would be a month ago. There has not, however, been any particular tendency by Democrats to outperform their numbers once the final polls are in. Push. 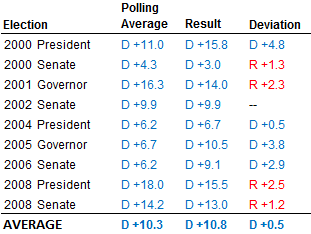 12. Which candidate attracted more people to their campaign appearances in the state over the last two weeks of the campaign? There’s not a lot of clear evidence for this either way in local media accounts, although I’ll give one point to Corzine because of his appearances with Barack Obama, which turned out a crowd of approximately 20,000 between two locations yesterday. Corzine +1.

13. Which candidate got more contributions over the last six weeks of the campaign from voters within the state? Between 9/15 and 10/20 (the most recent day available in New Jersey’s campaign finance database), Corzine received 436 contributions among New Jerseyans for $198,421, while Christie received 1,505 contributions for $950,043. Although voters may be less inclined to donate to Corzine because of his prodigious wealth, that’s certainly a pretty big edge for Christie. Christie +3.

14. Which candidate has run the more positive, optimistic campaign, and will leave voters feeling better about themselves as they exit the polling place? Both candidates have run mostly negative campaigns, but Corzine’s has been particularly relentless, whereas Christie has had a few moments of levity, particularly on the subject of his weight, which Corzine needlessly attacked. Christie +2.

15. Which candidate’s party controls the state’s electoral and judicial apparatus, in the event of a recount or otherwise disputed election? This is a clean sweep for the Democrats, as the control the Secretary of State’s office, the majority of Supreme Court seats, as well as most of the local political apparatus. Corzine +3.

I show Christie with 16 points and Corzine with 12 — actually, a less clear advantage than I’d expected when I went through a draft of this exercise last night. But it’s enough, combined with polling that seems to be breaking ever-so-slightly in Christie’s favor, for me to feel a little better about the call below.