As results stream in from South Carolina tonight, here are some helpful maps — courtesy of Matthew Bloch, a New York Times graphics editor — to keep track of how the candidates’ county-by-county vote shares compare with 2008. 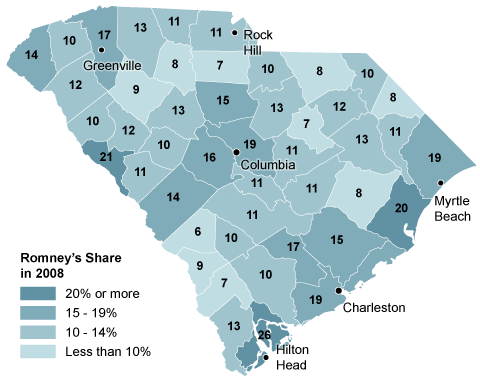 Mr. Romney received about 15 percent of the vote statewide in 2008, finishing fourth. FiveThirtyEight’s forecast sees Mr. Romney earning somewhere around 29 percent this time around, but he might need to be close to the upper end of our projected vote range, 39 percent, in order to best Newt Gingrich. So — as a very rough guide of his chances — look to see whether Mr. Romney is more than doubling his 2008 county-level shares. Mr. Romney was much stronger in urban portions of South Carolina in 2008, struggling to pick up votes elsewhere. 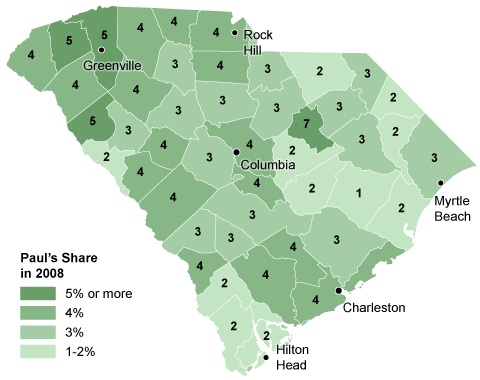 Mr. Paul is looking to far outperform his 2008 results; he received just 3.7 percent of the vote statewide that year. In 2008, Mr. Paul’s better results came in the northwest corner of the state, in the Greenville media market. 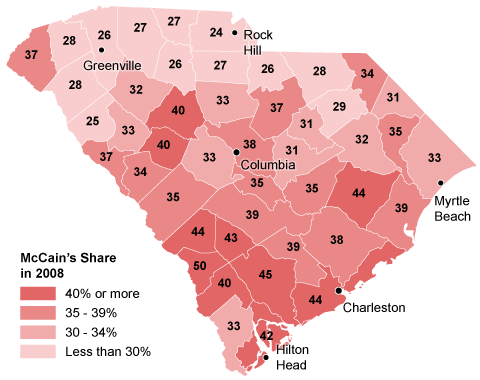 Mr. McCain won South Carolina in 2008, doing especially well in relatively well-off coastal areas like Charleston and Hilton Head. Mr. Romney will probably need to pick up some of this vote to have a chance of winning tonight. 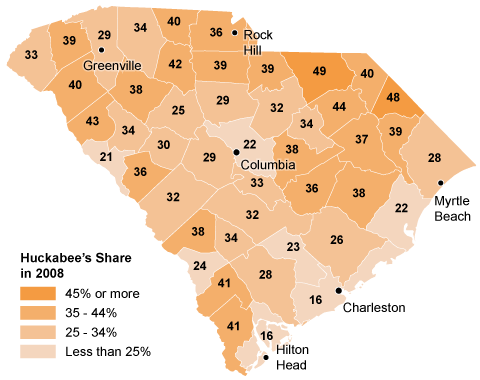 Mr. Huckabee came in a close second in 2008, with 30 percent of the statewide vote. He did much better in rural and in urban areas. Rick Santorum’s ideal scenario in South Carolina probably looks something like Mr. Huckabee’s 2008 map. If Mr. Santorum is getting about half of Mr. Huckabee’s vote totals, he would track to 15 percent of the vote statewide, in line with recent polls. 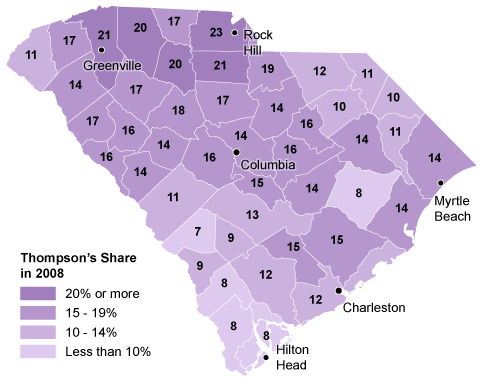 Mr. Thompson finished third in 2008, with 16 percent, performing especially well in upstate areas like Rock Hill. Although Mr. Thompson does not have an obvious proxy in this year’s primary, his nontraditional campaigning style is probably closest to that of Newt Gingrich.