I’m somewhat pressed for time this morning and am going to have to be a bit more circumspect than I’d like. But to follow up on Friday’s post: I think any serious attempt to evaluate the root causes behind the Democrats’ catastrophic electoral losses in the 1994 and their potential issues later this year would reveal as many differences as similarities between the two cycles. 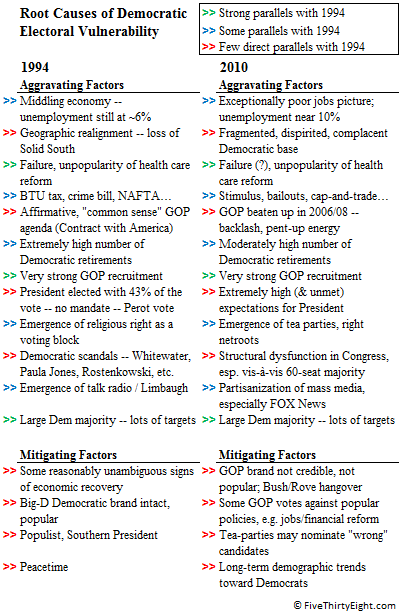 If you want to point to similarities, you can certainly find a few, such as the Democrats’ attempt to push forward a health care that had become rather unpopular with the public, and the fact that the GOP had very strong recruitment in both 1994 and 2010 (although that may be as much an reflection of the political environment as some kind of exogenous variable). And then there’s the obvious but often overlooked fact that the Democrats had large majorities in each cycle, and therefore a lot of targets to pick off.

On the other hand, in 1994, the economy had already started to add jobs at a fairly rapid clip; that’s certainly not the case this year, when even somewhat best-case forecasts anticipate a relatively stagnant employment picture for the immediate future. In 1994, there were a lot of Democratic scandals to worry about. That’s not been the case this year; the Obama administration has been fairly squeaky-clean , whatever scandals Andrew Brietbart might want to gin up. The 1994 cycle had some relatively unique geographical contingencies in play; many of the Democrats’ losses were in the South and reflected a sort of punctuated equilibrium response to their former dominance there. There’s not a direct parallel to that this year, where the Democrats’ numbers have fallen by a relatively equal margin across all different geographies. 1994 featured an affirmative, smart, and centrist GOP agenda — the Contract With America — to which there’s no direct parallel this year Finally, in 1994, you had a President who definitely didn’t have a mandate, as Bill Clinton had been elected with just 43 percent of the vote in a three-candidate race. This year, Barack Obama’s may be more that he’d raised too many expectations among too many disparate groups of people.

On the other hand, the Democratic base to be seems especially fragmented this year, much more so in 1994. The notion of structural dysfunction with the Congress has played a much larger role in the discourse this time around — and the optics of those conversations have generally worked against the Democrats. The psychology of the cycle is a bit different: Republicans got really beat up in 2006 and 2008, and there were very rapid shifts in the composition of the Congress, perhaps begetting some natural human desire for retribution and revenge and thereby helping to catalyze the Republicans’ enthusiasm advantage. By contrast, in 1994, the Democrats were coming out of a long period in which they had dominated the Congress — which created its own set of challenges for them, but not the same ones that they’re facing this time around.

Again, none of this is to suggest that the results that Democrats will encounter any fewer problems in 2010 than they did in 1994. Frankly, it has become easy enough to imagine Democratic losses of the same magnitude as 1994 or even worse. But the less superficial one is in comparing the two cycles, and the more one is willing to uncover root causes, the less similar they seem to be. There’s well more than one way to lose a majority.