Let’s take another look at that Kaiser poll I cited earlier today and look at the popular elements of the health care bill — those which poll at a net favorability of +10 or better. Which could be implemented through a “reconciliation only” strategy? It’s hard to say for sure, but here is a reasonable guess given the constraints imposed by the process: 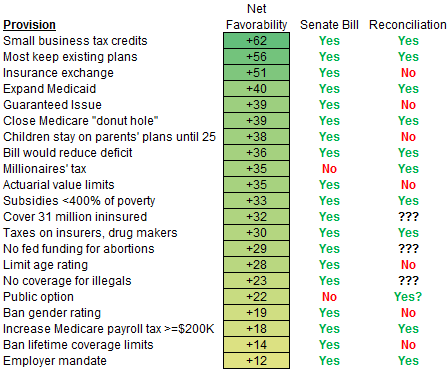 You could probably — not certainly — get a public option through reconciliation, and the public option is popular, polling at a net +22. However, there are are least five provisions which are more popular than the public option that you almost certainly couldn’t get through reconciliation only, including the insurance exchange, guaranteed issue, allowing children to stay on their parents’ plans though age 25, guarantees on the acturial value of private insurance policies, and limitations on age rating. Nor could reconciliation ban gender rating or or eliminate lifetime coverage limits, which also poll well.

p.s. For those who don’t catch the reference in the headline, the background is here.