Let’s be honest: Elo’s overconfident pick of the Eagles against the Seahawks was bad. Real bad. With a net loss of 48 points (!) relative to the average reader, it was the worst pick made by either the algorithm or the human pickers all season long, by some considerable margin. Sure, Elo didn’t know that Carson Wentz would get knocked out in the first quarter of that game, causing Josh McCown (whose QB Elo is 52 points lower than Wentz’s) to play most of the contest. But the readers rightly hammered Elo for perhaps reading too much into Philly’s late-season push (plus Seattle’s late-season lull) and the Seahawks’ weak point differential. The model was lucky to have sided with the Texans over the Bills, but for the weekend, Elo lost to the average reader by a margin of 20.0 points, giving the model its worst week of the season (and just its third overall loss to the field in 18 tries).

Amid a week of upsets, congratulations are in order for Christian Jensen, who leads all readers in the postseason with 200.0 points, and for Griffin Colaizzi, who took the lead in the full-season contest with 989.0 points. 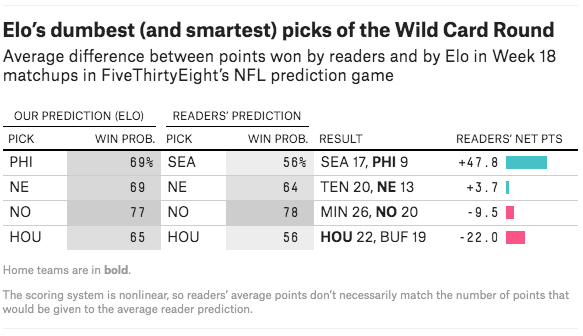