In picking against our Elo algorithm, it was kind of a rough week for the readers. The only big win against the computer was a smart hedge against the 49ers, who lost to Seattle in a classic battle Monday night. Otherwise, there were a lot more games like Jets-Giants and Browns-Bills, in which the readers paid for disagreeing with the model. And there was a bit of bad luck involved, too — Elo was able to crush the field by knowing Sunday morning that Matthew Stafford would miss Detroit’s game against the Bears. (Presumably, many readers failed to circle back and change their picks.) Overall, Elo won by an average margin of 71.4 points — a season high that was good for the model’s sixth-straight winning week.

Congratulations are in order, though, to Benjamin Thornton, who led all readers in Week 10 with 51.5 points — it was a notably low-scoring week, thanks to so many bizarre results — and to Aaron DiGenova, who once again leads the full-season contest with 674.7 points. 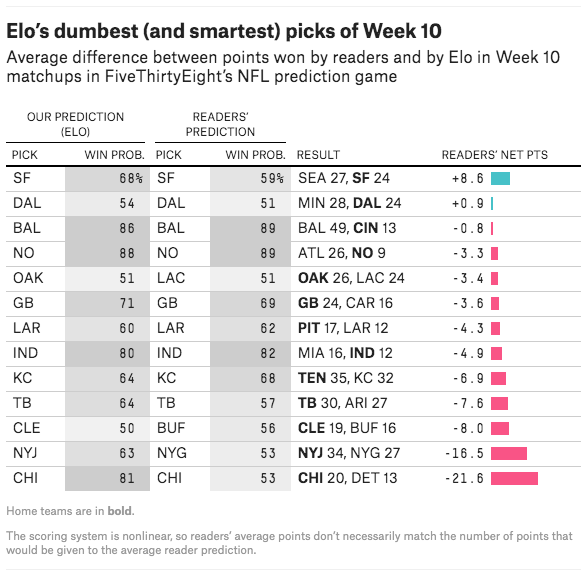