It’s become commonplace for computers to replace American workers — think about those on an assembly line and in toll booths — but two University of Oxford professors have come to a surprising conclusion: Waitresses, fast-food workers and others earning at or near the minimum wage should also be on alert.

President Obama’s proposal to increase the federal minimum wage from $7.25 to $10.10 per hour could make it worthwhile for employers to adopt emerging technologies to do the work of their low-wage workers. But can a robot really do a janitor’s job? Can software fully replace a fast-food worker? Economists have long considered these low-skilled, non-routine jobs as less vulnerable to technological replacement, but until now, quantitative estimates of a job’s vulnerability have been missing from the debate.

Based on a 2013 paper by Carl Benedikt Frey and Michael A. Osborne of Oxford, occupations in the U.S. that pay at or near the minimum wage — that’s about one of every six workers in the U.S. — are much more susceptible to “computerization,” or as defined by the authors, “job automation by means of computer-controlled equipment.” The researchers considered a time frame of 20 years, and they measured whether such jobs could be computerized, not whether these jobs will be computerized. The latter involves assumptions about economic feasibility and social acceptance that go beyond mere technology.

The minimum-wage occupations that Frey and Osborne think are most vulnerable include, not surprisingly, telemarketers, sales clerks and cashiers. But also included are occupations that employ a large share of the low-wage workforce, such as waiters and waitresses, food-preparation workers and cooks. If the computerization of these low-wage jobs becomes feasible, and if employers find it economical to invest in such labor-saving technology, there will be huge implications for the U.S. labor force.

First, when we discuss minimum-wage jobs, what types of jobs are we talking about?

The Bureau of Labor Statistics (BLS) has a system for classifying jobs: The Standard Occupational Classification (SOC), which was last updated in 2010. Combined with hourly wage data, also from the BLS and dating to May 2012, we can specify the occupations most affected by a minimum-wage increase.

The top occupations — retail salespeople, cashiers and fast-food servers — confirm the common perception of a minimum-wage job. These 10 occupations represent over half of all employment for which at least 25 percent of workers earn less than $10.10 per hour. But two data caveats are in order.

1. Because Obama’s proposal would not raise the federal minimum wage until 2016, and given this BLS data is from 2010 and 2012, it is an overly inclusive tally of jobs falling under the $10.10 threshold, because inflation and/or real-wage increases through 2016 could alter these occupations’ earnings.

2. Surely the jobs earning just over $10.10 per hour will also be affected by an increase, right? Yes, but raising the wage threshold to $12 per hour, for example, filters to largely the same list of occupations. The big exceptions are “office clerks” and “customer service representatives.” These occupations employ about 5 million workers who could be affected by a minimum-wage increase, but likely to a lesser degree than the ones presented in the table above.1

Second, how susceptible are these minimum-wage jobs to computerization?

Late last year, Republican Sen. Rob Portman of Ohio, an opponent of raising the minimum wage, gave the following anecdote on the potential consequences: “And you go into these fast-food places now, often there’s a drink dispenser, so you have one fewer person.” Could this happen on a broader scale? A drink dispenser is one thing, but could all jobs in fast-food restaurants be computerized?

The likelihood of technology replacing workers is hard to quantify, but Frey and Osborne attempt to do just that in their 2013 paper. Using detailed job descriptions for more than 700 occupations, the Oxford researchers evaluate each occupation in three areas: “Perception and Manipulation,” such as coordinated, dexterous hand movements, or working in cramped spaces; “Creative Intelligence,” such as composing a musical score; and “Social Intelligence,” such as negotiating with and persuading other people. Frey and Osborne then calculate the probabilities whether, within 20 years, such work could be computerized. Again, they’re not predicting whether these jobs will be computerized.

Where do minimum-wage jobs fall on this spectrum? For those jobs in which at least 25 percent of workers earn an hourly wage below $10.10, the median Frey-Osborne probability is 82 percent. When we weight each occupation by its total employment — for example, there are a lot more cashiers than sewers, and they have different likelihoods of computerization — the median probability is even higher at 91 percent.

Below is a table of the minimum-wage jobs for which we have a matching Frey-Osborne probability, and it is 97 percent or higher.2 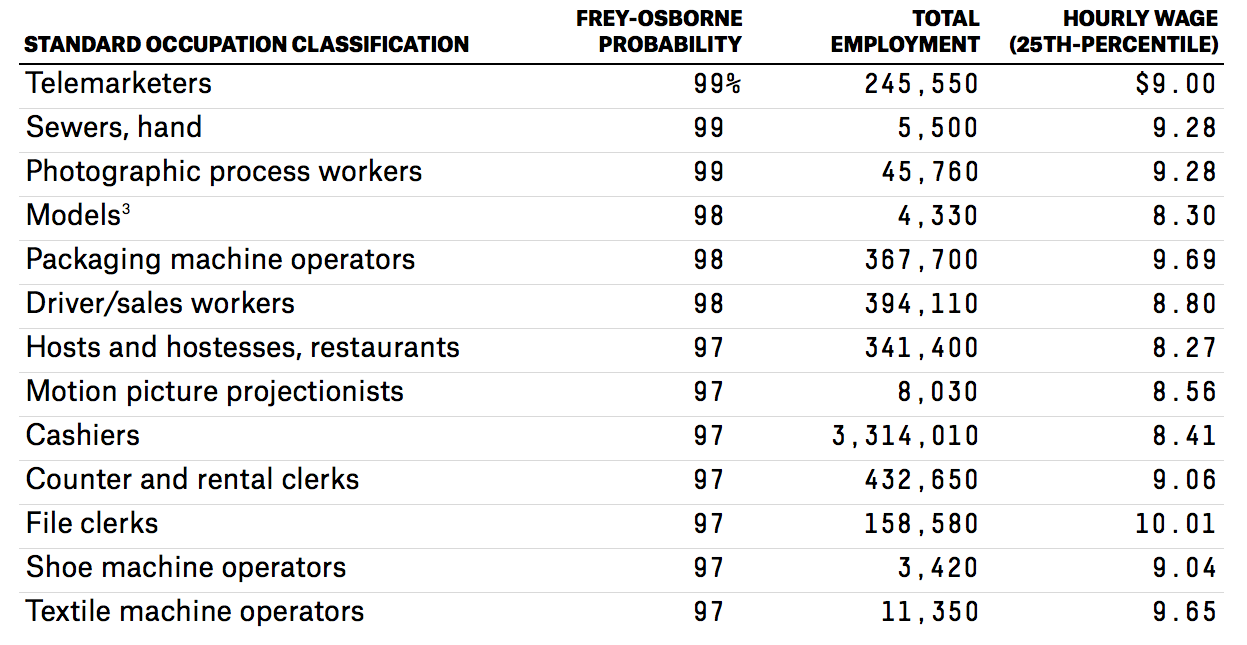 (Yes, “models” means what you think it means. For more, head to this footnote.)3

What is interesting is the fourth group: the non-routine and manual occupations. The number of jobs in this category is growing, and this includes a lot of minimum-wage work. Traditionally, labor economists thought these jobs were resistant to computerization, but the Frey-Osborne probabilities say otherwise.

Take, for example, restaurant hosts. They greet diners, take them to their seats, give them menus and coordinate with other restaurant staff to make sure customers are served. This job entails social interaction, mobility, manual dexterity and other capabilities.

Frey and Osborne say advances in mobile robotics and sensor technology, as well as their falling costs, mean that hosts’ jobs are vulnerable. For example, the much-touted Baxter robot — at just over $20,000 — is capable of learning basic manual tasks from a human. If a popular restaurant chain — say, Chili’s — were to replace its hosts with such robots and other chains followed suit, the move could reshape the debate over the federal minimum wage.

But we should keep in mind the time frame. Obama is proposing his increase for 2016, and the time frame of the computerization probabilities is 20 years. We have a long way to go, but exactly how long is difficult to predict.