I’d been doing a bit of background work, including some statistical analysis, on the NCAA conference realignment, planning an article or two for slow weekends and assuming that the process would play out slowly. But that’s been somewhat preempted by the news this week that Nebraska will join the Big Ten, and Colorado the Pac 10. Meanwhile, Texas, Texas Tech, Oklahoma and Oklahoma State are widely expected to join Colorado in the Pac 10 next week, which will cripple the Big 12 and put a whole range of things in motion.

What I came to realize in doing this background work is that while surely there will be chaos in the near term — some proud programs like Missouri and Kansas, for instance, are effectively homeless for the time being — it isn’t necessarily the case that we won’t end up with a reasonably elegant solution in the long-run.

Inevitably, it seems, we are headed toward four 16-team superconferences, each one representing one of the four major regions of the country. But when you start to sort everything out, it doesn’t look so bad, leaving plenty of rivalries intact and very few BCS teams without a home. Here’s an example of one such scenario: 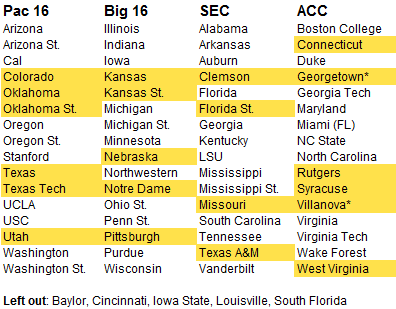 The key team to watch right now is Texas A&M, which could potentially give the Pac-10 its sixteenth team once the other Texas schools join. But Texas A&M seems to be wavering and might want to join the SEC instead. And why not? Texas A&M is a football school, and the SEC is the premier football conference in the country and would love to assert is presence in Texas, especially with a school like A&M that is halfway between Dallas and Houston and has fans in both markets. So let’s say that A&M goes to the SEC.

As strong as the SEC already is, I can’t imagine that once they’ve entered expansion mode, that they wouldn’t also want to add a Clemson, a Florida State, a Miami or possibly a Georgia Tech — nor or that some of these schools, especially Clemson and FSU, wouldn’t jump at the chance to join them.

This, of course, should make the ACC very nervous, which would be severely weakened as a football conference. So I’d imagine that the ACC has to start talking with some of the Big East schools — most notably, Syracuse and Pittsburgh, perhaps along with Connecticut and Rutgers — in order to reinforce itself.

The Big Ten, meanwhile, is in an interesting position. There are five members of the former Big 12 that are still free agents. In descending order of interest to the Big Ten, they are Missouri, Kansas, Kansas State, Iowa State and Baylor. But the Big Ten is also interested in some of the Big East schools, and if the ACC starts trying to poach the Big East as well, that conference could also come apart at the seams.

Let’s say that the SEC is successful in claiming Clemson and Florida State but not Miami or Georgia Tech, which have proclaimed loyalty to the ACC. The ACC, meanwhile, responds by adding Syracuse, which it procures in part by promising to add Georgetown and Villanova (which are good fits academically) as basketball-only members. It also adds U-Conn, which is happy to join such a strong basketball conference and who nobody else is interested in.

Meanwhile, the SEC, which is up to 15 members from A&M, Clemson and Florida State, does something aggressive adds Missouri. Why? Because the SEC is going to look down the road a bit and see that their next-best alternatives are West Virginia and Louisville, which are not terrible fits, but are much inferior to Missouri from the standpoint of television markets. The SEC is now full up at 16 teams.

The Big Ten responds by adding Kansas — which the Pac-10, still with a slot to fill, has been flirting with — which gives it the Kansas City market, and which reinforces it as a basketball conference. It also adds Pittsburgh, to which it probably has a more compelling pitch than the ACC, especially if rival Notre Dame is coming on board. On the other hand, the ACC locks in Rutgers, which would find it too strange to be in the same conference as a team from Kansas.

The Pac-10 can pick between Baylor and Utah; it goes with Utah, which rounds it out a bit better geographically.

The ACC, at 13 teams for football and 15 for basketball after having added Rutgers, settles on West Virginia (among a series of somewhat awkward fits) to fill itself out. It has a long-term goal of getting both Villanova and Georgetown to develop Div I-A football programs to bring it up to 16 teams for that sport as well (Villanova’s program is nearly Div I ready; Georgetown’s is nowhere near so), but it might play as a 14-team football league in the interim, or perhaps develop a temporary affilaition with the service academies.

And everyone lives happily ever after — except Baylor, which joins the Mountain West — and Cincinnati, Iowa State, Louisville and South Florida, which join Conference USA.

Obviously, there are a number of close cousins of the particular scenario that I’ve outlined, particularly as it involves schools like Kansas, Pittsburgh, Missouri and West Virginia that several conferences might be either equally interested or disinterested in. The strongest “prediction” I’d make is that, with this process having been set in motion, I don’t think you get back to any sort of equilibrium until you in fact have four large conferences, as most of the scenarios involving five conferences are very awkward.