Following up my previous post about the movement to increase the number of U.S. House seats, and after a long and very informative phone conversation with a smart and interesting reader named Mike Rosin, here I investigate the question: How would increasing the number of seats in the House of Representatives affect partisan competitiveness in the Electoral College?

Cutting to the chase, at least based on two-party competitiveness in the American states in recent presidential elections, expanding the House would almost certainly advantage the Democrats. “The bottom line on the Mississippi suit is that if this suit somehow succeeded it would not only increase the size of the House, it would also increase the size of the Electoral College,” Rosin wrote to me by email. “This would make the Electoral College both more small-d democratic and more capital-D Democratic.” 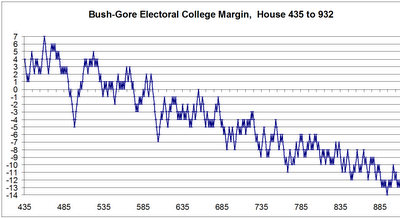 Rosin, a telecommunications engineer formerly at Bell Labs, is working on a book about the House as a tunable factor in the Electoral College. His work, in part, extends upon a recent paper by California State University-Northridge mathematicians Michael G. Neubauer and Joel Zeitlin that investigated the implications of House size on the Electoral College. (Rosin finds that the elections of 1876 and 1796 were critically depended on House size.)

To understand why expanding the House would favor the Democrats–and before getting to the chart above–let’s start with a simple observation and a simple example.

The observation is that Republican presidential candidates of late fared better in smaller states than larger states. In 2000, Al Gore won six of the 11 biggest, but just 14 of the other 39, plus DC. Because every state gets two electors as a result of having two senators, the Senate bonus diminishes as the ratio between House seats and Senate seats grows; eight years later, Barack Obama won 9 of the 11 most-populous states–which alone contain (a little more than) a majority of electors–but won only 20 of the remaining 39 states, plus DC. As a simple example, imagine the House were to be suddenly doubled in size to 870 members. The Senate bonus would roughly diminish by half, and with it the exaggerated electoral power of small states. 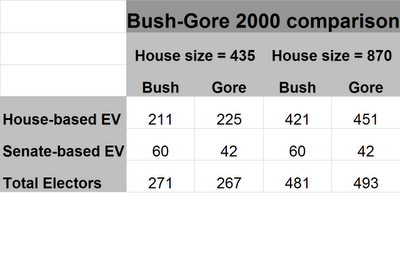 Rosin points out that, as a general rule, whenever one candidate wins more of the Senate-based electors (i.e., wins more states) while another wins the House-based electors (i.e., wins states with a larger overall population), there is a possibility of altering the outcome by changing the House size.# Anyway, shifting from general effects to the specific, and given the recent Republican advantage in smaller states, expanding the House will tend to advantage Democrats. Were Democrats the better small-state performing party, or should they become that party in the future, the partisan effect of a larger House would, of course, be reversed.

Rosin was kind enough to game out the effect of the increase of House seats for 538’s readers. Using the 2000 election, and thus the 1990 Census data upon which electors that year were still based, here’s what he did: He added one seat at a time, assigned it to the state that would have received that next House seat based on the Huntington-Hill method used for (re)apportionment, and then updated the Electoral College result for the Bush-Gore 2000 election. That year is used because in a blowout election, the size of the House might alter the final tally but would be very, very unlikely to change who won. And just to be clear, state-by-state voting results are not manipulated; only the number of electoral votes cast by each state is. (Neubauer and Zeitlin produce a similar, expanded version here.)

Bush beat Gore 271-267* in the actual, 538-member Electoral College, a Bush margin of +4. As it happens, the next three states that would have each gained an elector were, in order, Massachusetts, New York and New Jersey–all Gore-won states. So, if the House had been 438 members in 2000,+ Gore would have lost by just a single elector, 271-270. From there the added electors toggle between Gore-blue and Bush-red states. And, though it may be hard to see precisely from the figure above, when the House size hits 491 Gore is tied, and then takes his first lead at 492. The margin flips back and forth a bit, but once it reaches 598 Gore wins at every size up to and including 932–with the exception of another exact tie at 655. Overall, Bush’s lead grows as high as 7 and Gore’s to 14. But because Bush won by 4 with a 435-member House/538-member Electoral College, that means the largest net swing is +3 to Bush but +18 to Gore.

Hence, based on recent partisan trends in the states, a bigger House tends to yield a bigger advantage for a Democratic candidate, all else equal.

NOTES:
#In the analysis DC is treated as a “state” with two Senate-based electors and one House-based elector (at House size = 435), even though technically it is not a state and of course has neither two senators nor a voting House member. Hence, the Senate-based elector count for Gore in 2000 is 42, for the 20 states plus DC Gore carried.

*Yes, I know that one Democratic elector did not vote, so the official total is actually 271-266. And yes, I’m also aware of the fact that the state populations by 2000 actually “cost” Bush 7 electors because, were the Electoral College state apportionments based on 2000 Census data (already by then collected), instead of the 1990 decade, Bush’s total would have been 278, not 271–but this is a separate issue.

+There is a proposal to give DC a voting House member and also add one seat to Utah’s delegation–a political decision to adjust House seat totals, but not one in conformity with the Huntington-Hill’s natural adjustment to add new states. So when I speculate on a 438-member House, I do not mean one that would result from some political bargain to add seats to specific states, like the DC/UT proposal, but the automatic application of H-H.