George W. Bush won the Electoral College in 2000 following the recount in Florida. But Al Gore received more popular votes — about 540,000 more than Mr. Bush nationally, or about 0.5 percent of all votes cast across the country.

So Mr. Gore would have won the election if not for the Electoral College, right?

Actually, not so fast.

Presidential campaigns strive to maximize their chances of winning the Electoral College. They devote more resources — advertising dollars, field offices, candidate visits, and so forth — to states that might be decisive in determining its outcome.

We can see some tangible effects of this in 2008, when Barack Obama — who had much more money and much better field operations than John McCain — over-performed in swing states relative to non-competitive ones.

In the closing months of the campaign, the Obama campaign was concentrating its efforts in 15 states, plus the Second Congressional District of Nebraska (which awards one electoral vote to the candidate that wins it regardless of statewide results).

Nationally, Mr. Obama improved on John Kerry’s performance by a net of 9.7 percentage points. But in these swing states, he improved on Mr. Kerry’s numbers by an average of 13 points. 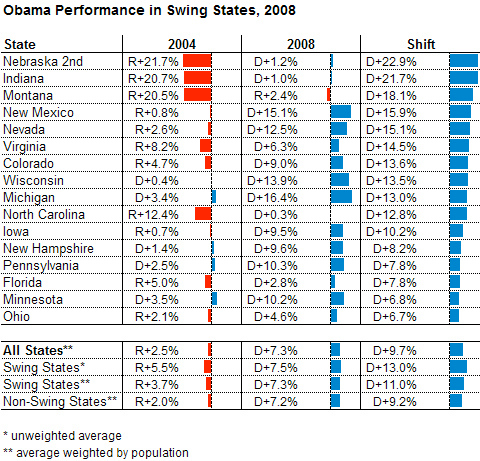 Mr. Obama’s gains were largest in smaller swing states, like Montana, Nevada, New Mexico, Indiana and the Second Congressional District of Nebraska. Candidates can potentially get more bang for their buck in these states, which are cheaper to blanket with advertising and field offices. Smaller states tend also to be more idiosyncratic than their larger and more heterogeneous counterparts, allowing for a localized pitch to be more effective.

The political scientist Seth E. Masket has studied this issue in far more detail and come to a similar conclusion. Mr. Masket’s research went all the way down to the county level, comparing Mr. Obama’s vote in counties where his campaign had set up field offices to those where they hadn’t. Mr. Masket identified statistically significant effects; his research suggests, in fact, that Mr. Obama’s “ground game” may have allowed him to win three states (Indiana, North Carolina and Florida) that he otherwise would have lost.

The optimal strategy for winning the Electoral College, of course, is probably sub-optimal for maximizing one’s popular vote. There are diminishing marginal returns to campaign expenditures, particularly advertising dollars. Spending another $100,000 on advertising in New Hampshire — after you’ve already spent $5 million there — might sway (for instance) only 1,000 votes, since the state will already have been saturated with commercials. Spending the same $100,000 in Vermont might make a larger impact in the popular vote — perhaps 2,000 votes per $100,000 of spending.

If there hadn’t been an Electoral College, Mr. Obama would still have had his resource advantages over Mr. McCain — more money, more volunteers, and so forth. But he would have leveraged them in different ways, dispersing them more across the 50 states, with the goal of maximizing his share of the popular vote. Chances are that he would have won it by a slightly larger margin than the 7.3 points that he actually prevailed by.

There’s some further evidence of the way the Electoral College can distort popular vote results in the fact that swing states have notably higher turnout. Relative to their number of electoral votes, turnout is about 25 percent higher in swing states than in Democratic or Republican base states.

Now back to 2000. In that year, Mr. Bush was generally regarded as having the sorts of resource advantages that Mr. Obama had in 2008: more money, more volunteers, and better voter-targeting efforts.

Mr. Bush, evidently, deployed those resources efficiently from the standpoint of winning the Electoral College. But had there been no Electoral College, these advantages would have helped him to maximize his share of the popular vote instead.

Whether this would have been enough for him to close his 540,000 vote deficit with Mr. Gore is hard to say. But the Electoral College can cause significant enough distortions in turnout and strategy that this should be regarded as an unresolved question. The popular vote results that emerge from a universe like ours in which the Electoral College does exist are not quite the same as the ones we’d see in a world where it didn’t.