OK, here’s a little something for the overnight/European crowd. This summer, I helped ESPN to create something called the Soccer Power Index (SPI), which made its official debut last month. One of the cool features of the SPI is that it’s designed to allow you to calculate the win/loss/draw possibilities between any two clubs based on their respective ratings. With a little bit of additional programming, we can use this to run all sorts of fun statistics on the World Cup Draw, which will take place today in South Africa (noon Eastern time) and assign the 32 teams between eight groups. Anyway, there’s much more detail in my article over at ESPN.com, although we’ll provide a teaser/Cliff’s Notes version here. Soccer fans — read on! Everyone else, go merrily on your way and ignore the World’s Favorite Sport.

The draw, indeed, is very important — with the possible exception of the NBA draft lottery in a year where you have someone like LeBron available, I can’t think of too many other sporting events in which random luck so profoundly affects a team’s fortunes. For example, given it’s best possible draw (South Africa, Slovakia and Paraguay), the United States would have a 63 percent chance of reaching the knockout stage (“playoffs”, for those Americans in the audience). But given its toughest possible draw — Brazil, Côte d’Ivoire, and Portugal — those odds would drop all the way to 25 percent. England is 94 percent to advance with a dream draw of New Zealand, Algeria and Slovakia, but 69 percent against a nightmare draw of the USA, Portugal, and Ivory Coast. Ivory Coast, for their part, could be anywhere from 89 percent to 48 percent depending on their draw — you get the picture.

What you will see in the tables below is a series of statistics for each of the 4 ‘Pots’ that FIFA draws from. Each World Cup group will consist of one team drawn from each pot, subject to a few additional geographical restrictions (for example, there can’t be more than two teams from Africa or South America in the same group). The statistics presented are as follows:

Rank: Each team’s SPI ranking among all international clubs.
Rate: Each team’s SPI rating; these numbers run from a 0 to 100 scale.
OFF: Each team’s offensive rating, which can be roughly interpreted as how many goals a team would be expected to score against an “average” worldwide club (“average” in this case meaning a team like Canada or Iraq.)
DEF: Each team’s defensive rating, using the same scale; lower numbers are better.
Impact: This is the effect a team will have on its group opponents’ chances of advancing to the knockout stage. For example, Brazil’s impact is a minus-6 percent, meaning that if a team happens to draw the Brazilians (as opposed to another, randomly selected team from Pot 1), its odds of making it to the knockout stage are reduced, on average, by about 6 percent.
Advance %: This reflects each team’s chances of reaching the knockout stage if they draw an average opponent from each of the other three groups, subject to the geographical restrictions as described above. Once the draw takes place, we will re-calculate these numbers based on the actual groups, to see who got lucky and unlucky. 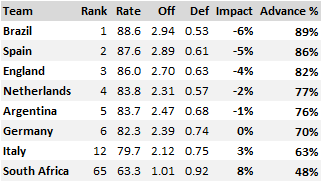 This is the seeded pot — essentially what FIFA considers to be the seven best teams in the World, plus the host, South Africa. SPI actually thinks they’ve gotten six of the seven seeds right, the only difference being Italy (SPI would take Portugal instead). But since the Italians are the defending World Champions and as other rating systems have them scored more favorably, it’s very hard to render a complaint about this one.

Then there’s South Africa, who are probably the worst team ever to host the World Cup. We don’t have historical SPI ratings, but looking at a different ratings system called ELO instead: the worst team prior to South Africa to have hosted the Cup was probably either the United States (which came into the 1994 tournament with a rating of 1591) or Switzerland (a 1616 rating in 1954). South Africa is rated quite a ways behind at 1508. So, while everyone else will draw one of the best teams in the world, three lucky contestants will instead get South Africa — whom we have ranked 65th. With that said, the match against South Africa won’t be quite as easy at looks, because home field advantage is very important in international soccer. Hence, as weak as they are, between home field advantage and the way the draw is stacked in their favor, South Africa has nearly even odds of advancing. 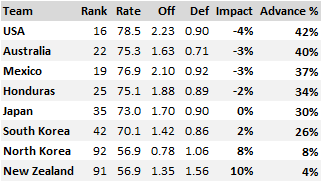 The relatively good teams in this group — the United States, Australia and Mexico — get kind of screwed over because they don’t have access to some of the very weak Asian and Oceania teams that make up the bottom of the pool (particularly North Korea and New Zealand). Indeed, the United States will need a nearly-perfect draw to avoid facing two or three really tough opponents in the group stage. 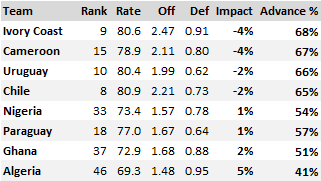 If you don’t follow international soccer regularly, you might not recognize how strong this pot is. That’s because it contains the other five African qualifiers, and there is strong evidence of not just home-field advantage but also home-continent advantage in the World Cup. Thus, a team like Ivory Coast, which is already very good, becomes an elite team in South Africa, while a merely-decent team in Ghana, who would ordinarily be considered a rather favorable draw, becomes quite tough. Matters are made worse by the fact that three South American teams that round out the group are also very good. 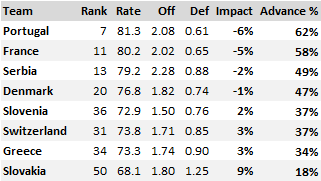 This looks a bit like a Rick Steves itinerary. Anyway, there’s a pretty big divide here between Portugal and France — who are not far behind most of the teams in Pot 1 — and some of the teams toward the bottom of the group, particularly Slovakia. Denmark, which is about as average as it gets compared to the rest of the field, is sort of my benchmark team for the World Cup. Is your team good enough to beat Denmark? Then it’s probably good enough to advance to the playoffs knockout stage. Unfortunately, the United States just lost to the Danes 3-1 in a friendly two weeks ago and looked dispirited in doing so.

There’s a lot more analysis over at ESPN, so I hope you’ll click on and read my piece over there.