One of the more cynical perspectives you’re liable to hear about about the United States victory in the Winter Olympics medals table — the Americans took home 37 pieces of hardware, the most of any country in any Winter Olympiad ever — is that it results substantially from the introduction of new-fangled sports like snowboarding, freestyle skiing, and short-track speed skating.

There is some truth in this: 20 of the United States’ 37 medals came from events that were not contested the last time the Olympics were held in Canada, at Calgary in 1988. Still, that leaves 17 medals, including 5 golds, that the United States did win in old-school events — far more than the 6 medals and 2 golds they actually won in Calgary. Moreover, the expansion of the Winter Olympic program — which has roughly doubled in size since 1988 — has benefited many other nations as well, with more medals now being awarded not just in snowboarding and short-track but also in several other events (like biathlon and curling) in which the United States is not especially proficient.

Suppose that we eliminate all medals won in this year’s Olympics from sports that were not contested in 1988. Which country would have owned the podium?

Germany would have won, with 20 medals, although the United States would be just a tick behind them at 17, followed by Norway at 16. However, Germany’s putative win requires a bit of an asterisk: the country was not unified in 1988. If we take the 20 German medals and allocate them based on the birthplaces of the respective athletes**, 11 would have gone to those from the former East Germany and 9 from the former West Germany. That means the United States would have won the medal count after all — if 2010’s athletes were contesting the 1988 events based on 1988 borders. 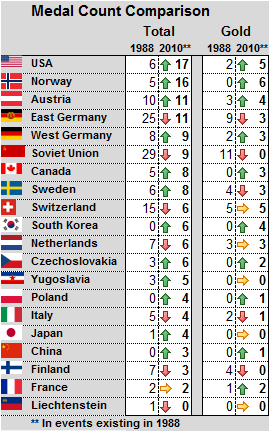 As you can see, I’ve also put back together the Soviet Union, Czechoslovakia and Yugoslavia, but none of them have enough hardware to lap the United States. Indeed, the decline in the performance of the Soviets is pretty remarkable: from 29 medals in 1988 to just 9 in old-school events in 2010 (and no golds). East Germany experiences nearly as significant a decline: from 25 medals in ’88 to 11 this year. Other big gainers, apart from the United States, include Norway and the Asian countries (and to a lesser extent Canada). The other big loser is Switzerland, which though not an Eastern Bloc country isn’t the Olympic power that it once was.

The basic story is that we’re seeing those medals won by the former Soviet/Eastern bloc countries shifting to North America and Asia, with Western Europe holding roughly steady. 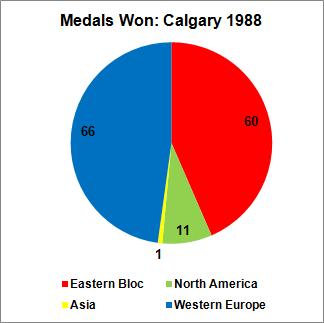 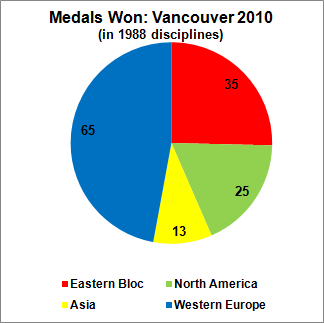 The lesson here may be that a centrally-planned economy is not good for very many things — but the Olympics may be an exception.

** For medals won in team events, the German medals were broken into shares — 3/4 of a medal to West Germany and 1/4 to East Germany, for instance, for the Germans’ silver in the team ski jumping event, since 3 of the 4 members of that team were born or naturalized in former West German territories whereas the fourth was born in East German owned lands. One German athlete, Jenny Wolf, was born in Berlin; I was not able determine which side of the Wall she was born on, so I split her medal between the two countries as well.