In 2000, the dot-com bubble burst, destroying $6.2 trillion in household wealth over the next two years.

Five years later, the housing market crashed, and from 2007 to 2009, the value of real estate owned by U.S. households fell by nearly the same amount — $6 trillion.1

Despite seeing similar nominal dollar losses, the housing crash led to the Great Recession, while the dot-com crash led to a mild recession. Part of this difference can be seen in consumer spending. The housing crash killed retail spending, which collapsed 8 percent from 2007 to 2009, one of the largest two-year drops in recorded American history.2 The bursting of the tech bubble, on the other hand, had almost no effect at all; retail spending from 2000 to 2002 actually increased by 5 percent.

What explains these different outcomes? In our forthcoming book, “House of Debt,” we argue that it was the distribution of losses that made the housing crash so much more severe than the dot-com crash. The sharp decline in home prices starting in 2007 concentrated losses on people with the least capacity to bear them, disproportionately affecting poor homeowners who then stopped spending. What about the tech crash? In 2001, stocks were held almost exclusively by the rich. The tech crash concentrated losses on the rich, but the rich had almost no debt and didn’t need to cut back their spending. 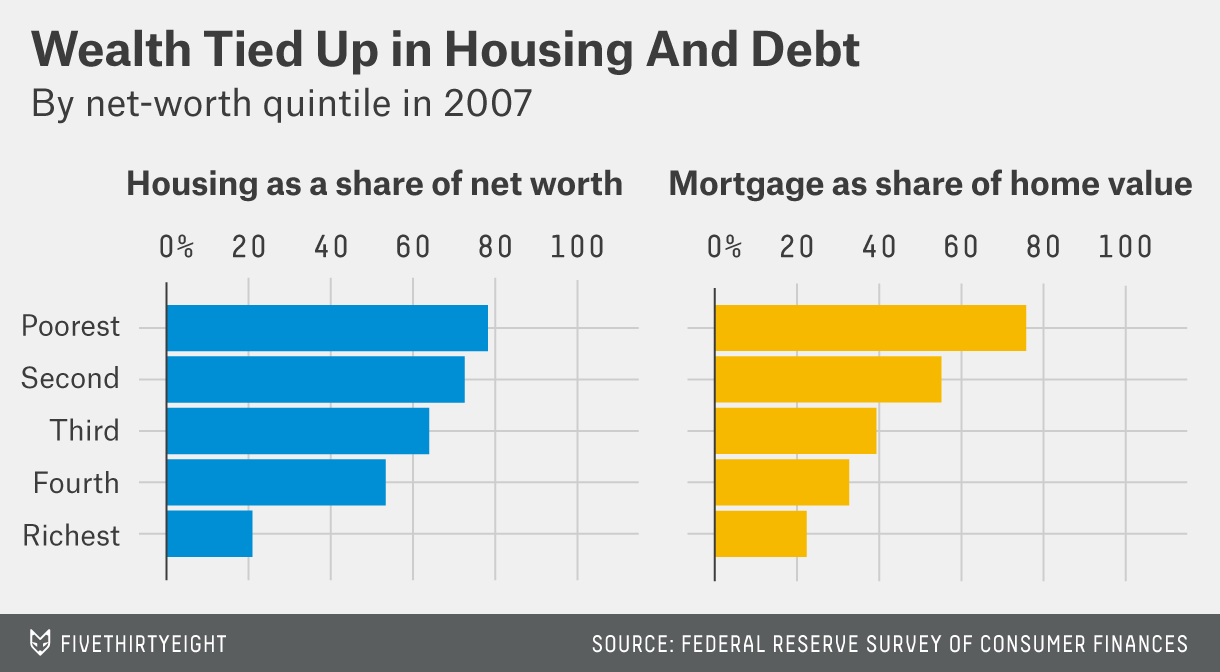 The chart above splits U.S. homeowners into net-worth quintiles, and plots housing as a fraction of all assets for each quintile in 2007. For the poorest homeowners, houses were by far the most important thing they owned going into the Great Recession, making up almost 80 percent of their total assets. Another way of saying this is that the poor held very few financial assets such as stocks, bonds or mutual funds. On the other hand, housing was a much smaller part of the overall asset portfolios of the richest households — less than 20 percent.

So the poor were much more vulnerable to a crash in housing prices in 2007 than the rich were. In fact, it was even worse for the poor because they used so much debt to purchase their homes. Above, we also plot mortgage balance as a fraction of home value in 2007 for each of the net-worth quintiles. For example, if a household owned a home worth $100,000 and had a mortgage of $80,000, then the household would have a mortgage balance that was 80 percent of the home’s value.

The poorest homeowners had very large mortgages, whereas the richest had very small ones relative to the value of their homes. The chart shows that poor homeowners in the United States primarily owned housing assets, and those assets were highly leveraged.

Leverage can be a very dangerous thing for borrowers when their home values plummet. Continuing the example above, if someone has a $80,000 mortgage on a $100,000 home, and the home drops in value by 20 percent to $80,000, then the homeowner loses $20,000, or 100 percent of their equity in the home. Home prices fell 20 percent, but the homeowner lost 100 percent. That’s the effect of leverage!

The devastating effect on poor homeowners can be seen in the chart below, where we track the evolution of homeowner net worth from 1992 to 2010 for the poorest and richest quintiles. 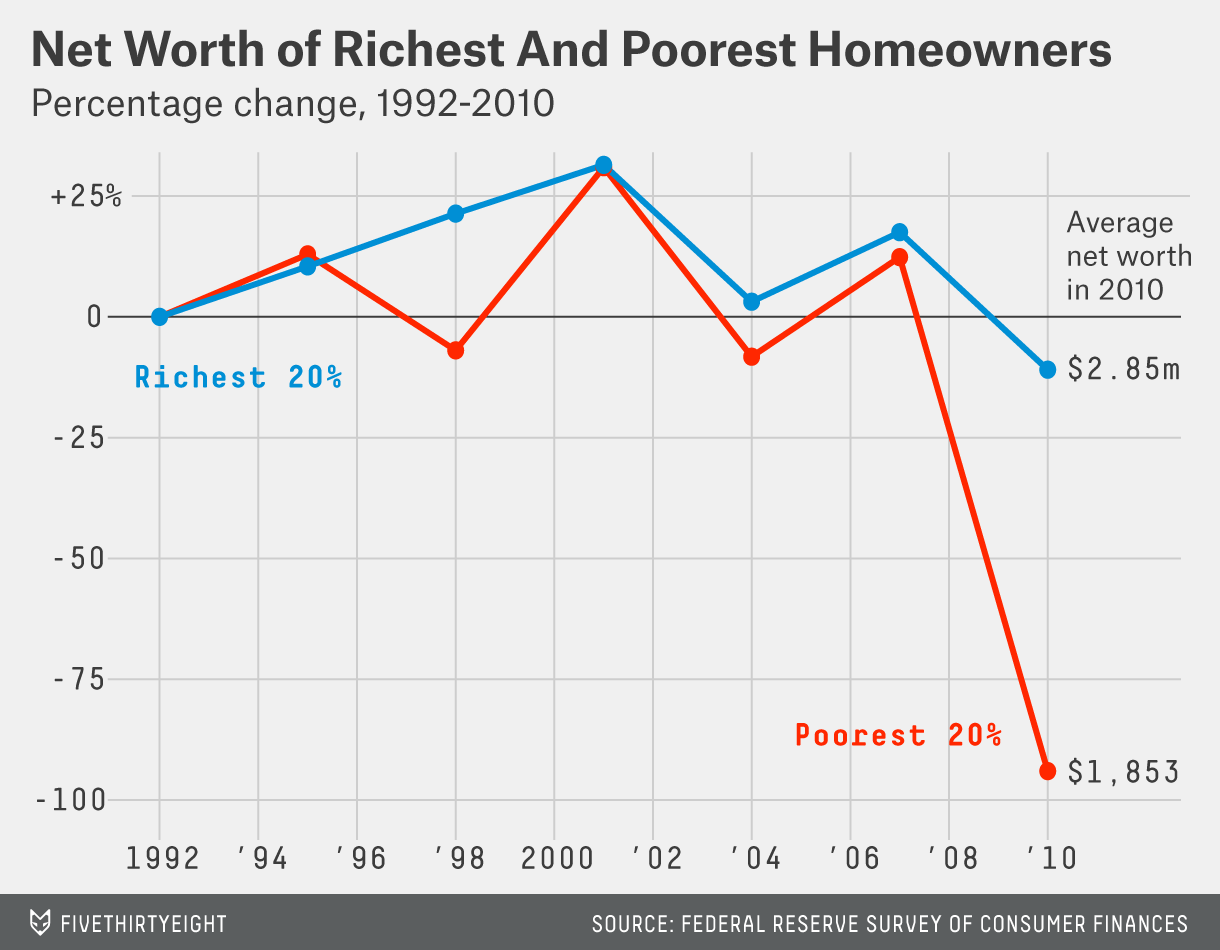 The poorest homeowners experienced a dramatic decline in net worth during the Great Recession. They had $30,000 in net worth in 2007, and almost nothing in 2010. When home prices collapsed, they bore the brunt of the shock. The wealthiest homeowners, on the other hand, saw only a minor decline in their net worth. The dollar amount of the loss was large, but they were basically back to their 2005 level of wealth.

The poor cut spending much more for the same dollar decline in wealth. This fact is one of the most robust findings in all of macroeconomics, and has been confirmed in the context of housing, fiscal rebate checks, and credit card limits. It also makes intuitive sense. If Bill Gates loses $30,000 in a bad investment, he’s not going to cut back his spending. If a household with only $30,000 suffers a similar loss, they’re going to massively slash spending.

Macroeconomists have traditionally ignored distributional issues, grouping all households into a a single “representative agent.” This assumes that differences in spending responses to wealth shocks don’t matter, which is at odds with the empirical findings.

In other words, traditional macroeconomic models place no importance on the fact that the poor pull back on spending much more than the rich when their limited wealth takes a hit. For example, former Federal Reserve Chairman Ben Bernanke described why academics doubt the importance of distributional issues in his book on the Great Depression, suggesting that differences in spending propensities because of wealth would have to be “implausibly large” to explain the decline in spending in the 1930s. Some economists would make a similar point about the most recent recession.

We disagree. The dramatic effect of the 2008 housing crash on spending, and its contrast with almost no effect of the early 2000s tech crash, shows how important distributional issues should be in macroeconomics. As the recent craze over French economist Thomas Piketty’s new book, “Capital in the Twenty-First Century,” shows, both economists and lay people are beginning to understand that wealth inequality is crucial for understanding the broader economy.

Amir Sufi is a professor of finance at the University of Chicago Booth School of Business and co-author of “House of Debt.” @profsufi

Atif Mian is a professor of economics and public policy at Princeton University and co-author of “House of Debt.” @atifrmian