With Sarah Palin’s attack yesterday on Barack Obama’s patriotism and his ties to former Weather Underground ringleader William Ayers, the McCain campaign has left little doubt about in which direction it intends to head over the final month of the campaign. Namely, they’re going to drive their campaign into a ditch — and hope they can find a way to take Obama along for the ride.

It is a sad denouement for what was one to be a high-minded campaign focused around themes of honor and reform (themes that were resuscitated briefly during the Republican Convention), possibly accompanied by McCain’s taking a one-term pledge. It is also, however, Mr. McCain’s strategists would seem to have concluded, their only remaining hope.

I am not here to dispute that this is McCain’s best strategy — in the same way that an onside kick is a team’s best strategy when it trails late in the game with no timeouts left. But like the onside kick, it is fairly unlikely to work.

For one thing, increasing numbers of middle class Americans may already have decided that Barack Obama is their home team. One of the more powerful dynamics during the first Presidential debate is that Obama, in the first 15 minutes of the proceedings, pointed to himself and said, “Hey! Middle Class! I’m your guy!”. McCain did not mention the middle class, instead reverting to traditional Republican talking points about supply-side economics. From there forward in that debate, dial testers reacted poorly when McCain attacked Obama, or appeared to be contemptuous of him.

If this is the case, however — and it very well could be — then this election is over. If the middle class had decided that Barack Obama is their guy, then he’s going to win. So assume for a moment that there remain a sufficient number of persuadable voters to provide McCain with a prospective path toward victory.

Even so, I think most observers have tended to overstate the extent to which this election is in fact about Barack Obama. It is also very much about John McCain. As I argued in the Los Angeles Times in August, the principal reason why McCain has been able to remain in a relatively tight race with Obama, even as the Republican brand is in shambles, is because he has largely been able to distance his brand from that of the Republicans. This is evidenced by the fact that polling during the primaries indicated that Obama was in fact headed toward a landslide victory against virtually any other Republican, whether Mike Huckabee or Fred Thompson or Mitt Romney (though the later might have had some interesting opportunities in light of the current economic crisis). By contrast, for all the time her advisers spent trumpeting her electability, Hillary Clinton never had more than a 3-point lead against McCain before exiting he race, and trailed him for much of the primary season.

It may be quite difficult for McCain to attack Obama in this fashion without significantly damaging his own brand. The chart below presents a smoothed curve of each candidate’s net favorability ratings since the first of the year: 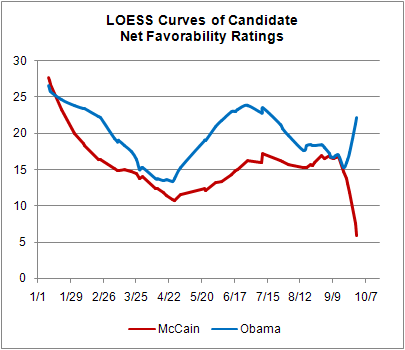 What’s interesting is that, with the exception of the past couple of weeks, McCain’s and Obama’s ratings have been fairly strongly correlated, tending to rise and fall together. This is not to say that negative campaigning doesn’t work — it sometimes does — but it works at diminished efficiency, because you may be giving back 50 cents on the dollar by harming your own approval scores.

If the McCain campaign brings up William Ayers — or Jeremiah Wright — it will almost certianly be seen as attack politics. This might seem to be stating the obvious. But remember that this wasn’t the case during the primaries. The Wright and Ayers stories were instead driven by actual news — ABC’s reporting of Wright’s inflammatory sermons, for instance — and were largely not pushed by the Clinton campaign. So unless McCain’s oppo research team is sitting on some fresh news about Obama’s ties to Ayers or Wright, the stories are liable to be reported as a typical partisan attack, which will impeach their credibility in the public’s eyes and reduce their staying power.

The Obama campaign does face a bit of a dilemma. By responding to the attacks aggressively — as they seem inclined to do — they may be able to mitigate their impact, and possibly turn them around on John McCain. But they also keep the story in the news. The Obama campaign can’t afford to be swiftboated, but it also wants to be careful not to make this the story for more than a couple of news cycles.

Ultimately, however, the fact that McCain is resorting to these sorts of attacks are an indication of just how much his brand has been damaged. They certainly aren’t likely to help him to repair it.