Take a look at what’s happened to the share prices of the six largest publicly-traded health insurance companies since Labor Day, which was about the point at which the Democrats appeared to regain their footing — at least up to a point — on health care. 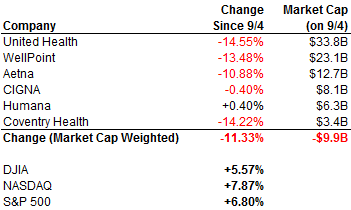 Weighted for market capitalization, these insurance stocks have lost 11 percent of their value since Labor Day, wiping out about $10 billion in value. And that’s understating the case since the major indices have gained 5-8 percent over the same period — the insurance industry stocks are underperforming the market by just shy of 20 percent.

So, they’re not happy campers, and have begun to launch a belated but well-timed attack on the Democrats’ plans.

Jonathan Cohn at TNR has more about the somewhat questionable claims that PriceWaterhouseCoopers has made on the industry’s behalf. What’s changed, by the way, is two things. Firstly, the individual mandate has been weakened to the point where it’s arguably a tokenish provision. There are good, policy reasons to be worried about this, although the insurance lobby’s reasons for being opposed — they’ll have less guarantee of an incoming phalanx of high-margin customers — are not necessarily the same as the public’s at large. The second factor is that the Baucus bill in certain ways treats the insurers fairly harshly, both taxing them directly as well as levying a surcharge on high-cost insurance plans.