When Donald Trump delivered his big economic speech in Detroit earlier this month, free trade — and the harm it has allegedly done to U.S. workers — was at the center of his agenda. And one country in particular drew his ire: China.

“China is responsible for nearly half of our entire trade deficit,” Trump said. “They break the rules in every way imaginable.”

Trump’s tone is harsh, but he’s hardly the only one challenging free trade in general, and China in particular, on the campaign trail this year. In her own economics speech just days after Trump’s, Hillary Clinton promised to “stand up to China and anyone else who tries to take advantage of American workers and companies.” Bernie Sanders, during his failed bid for the Democratic nomination, said trade with China has “cost us millions of jobs.” And it isn’t just presidential candidates: Republican Ohio Sen. Rob Portman, for example, has made the trade deficit with China one of the central issues of his re-election campaign.

The focus on China is particularly striking because for more than 20 years it has been Mexico, not China, that has been the focus of protectionists’ ire. But now the politics of trade are shifting, reflecting in part the growing belief among many economists that trade with China could have larger consequences than they previously acknowledged.

For many years, the trade debate was really just a debate about the North American Free Trade Agreement. The 1993 trade deal has long been a lightening rod for political criticism: From Ross Perot’s warning in 1992 that NAFTA would create a “giant sucking sound” of U.S. jobs fleeing south of the border, to then Sen. Barack Obama campaigning on renegotiating NAFTA ahead of the 2008 presidential election. When the Pew Research Center polled Americans in 2010, it found most had a favorable opinion of trade — including a near even split regarding trade with China — but specific trade deals such as NAFTA were unpopular.

Criticism of NAFTA hasn’t disappeared. Sanders called the trade deal “disastrous” on the campaign trail this year, and in his Detroit speech, Trump warned that a vote for Clinton “is a vote for NAFTA.” Labor-affiliated economists still maintain that NAFTA encouraged multinational companies to move manufacturing jobs to Mexico, thus lowering the wages of U.S workers.

But a majority of economists now argue that NAFTA’s effect on the U.S. economy and its workers was relatively modest. “NAFTA has not been a big deal,” said David Autor, an economist at the Massachusetts Institute of Technology who has studied the impact of trade. According to one estimate from economists John McLaren and Shushanik Hakobyan, NAFTA slowed wage growth for the subset of workers in industries exposed to Mexican imports; but they point to other estimates that NAFTA had a small positive impact on the incomes of U.S. workers as a whole.

Both critics and defenders of free trade are instead increasingly focusing their attention on China, and with good reason: China’s economic impact dwarfs that of Mexico or other trading partners. As The Wall Street Journal wrote last week, China’s rise to be a global trade behemoth had a more disruptive effect on the U.S. labor market than did Japan’s or Mexico’s from an earlier era.

The scale and speed of China’s rise in trade is unprecedented. The share of U.S. spending on Chinese goods rose nearly eightfold between 1991 and 2007. By 2015, U.S. trade in goods and services with China totaled $659 billion — with the U.S. importing $336 billion more than it exported. China has become the U.S.’s top trading partner for goods. And although the goods trade balance — how much the U.S. exports minus what it imports — is negative for NAFTA countries Canada and Mexico too, the deficit with China has grown to be much bigger. 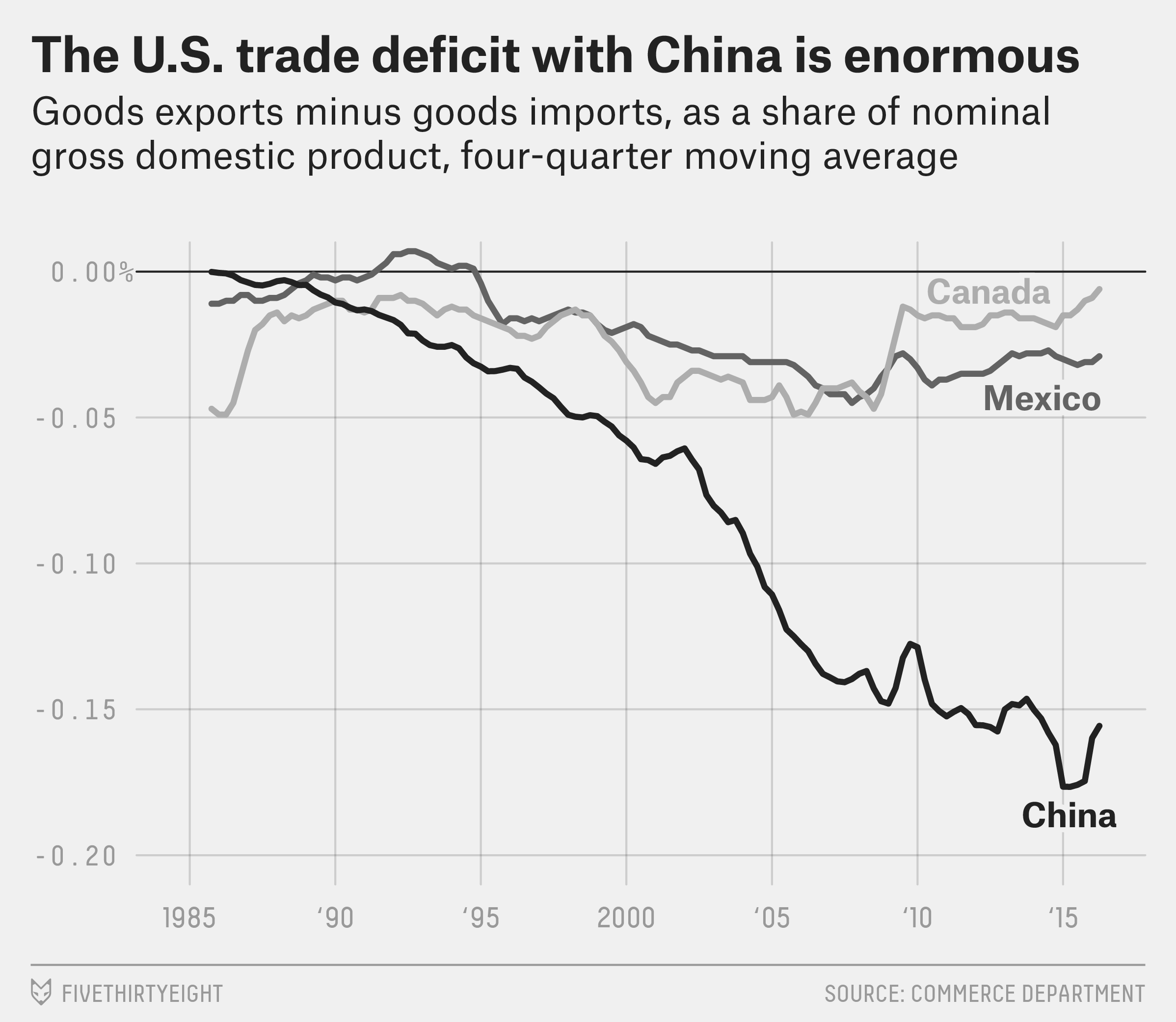 Concern about China’s economic impact has attracted much more support from the economic establishment than criticism of NAFTA ever did. Most mainstream economists have long argued that rising global trade is a positive for the U.S. economy. Although some workers might lose their jobs from rising competition from imports, they argue, the economy as a whole grows bigger. Until recently the prevailing view among economists was that cheaper Chinese imports — shoes, toys, furniture — gave more purchasing power to consumers, and that economic benefit outweighed some factories being shuttered.

But two recent research papers by economists Autor, David Dorn and Gordon Hanson are far less sanguine about the stunning rise in Chinese imports. During the past 15 years, Chinese trade has had a concentrated and devastating effect on a certain segment of American workers, they find. Chinese trade is responsible for the loss of more than 2 million jobs between 1999 and 2011, and the affected U.S workers adapted much more poorly than expected, often unable to find work and relying instead on government assistance.

Some economists are even more negative about China’s impact. Robert Scott, an economist at the left-leaning Economic Policy Institute, along with co-author Will Kimball, estimated the impact of Chinese trade to be much worse: causing around 3.2 million lost jobs, most of them in manufacturing. That is the “small problem,” Scott said. The bigger one is suppressed wages, as his colleague Josh Bivens argued in a 2013 analysis that estimated growing trade with less-developed countries lowered the wages of the average worker without a college degree by $1,800 (in 2011 dollars); one-third of it is attributable to China.

Other economists supportive of free trade dispute the EPI’s analysis, but even they have been forced to re-evaluate their assessment in response to recent evidence. The Autor-Dorn-Hanson research is “really sobering,” said Joseph Gagnon, a senior fellow at the generally pro-trade Peterson Institute for International Economics. Even when the U.S. economy was doing relatively well before the Great Recession, there were signs Chinese trade had already walloped some U.S. workers. “I would never have thought that even then there were huge pockets of people who used to have jobs and would like to have jobs, but were not employed, and it was traceable to China,” said Gagnon.

Despite such concerns, however, China is in some ways an awkward villain for trade critics. With China there is no signature policy such as NAFTA for critics to point to. Instead, China’s rise to be the global trade villain du jour was more subtle, happening through less-known institutions and by murkier financial means. Whereas NAFTA came to be through a public vote in Congress, China’s ascension into the World Trade Organization in 2001, for instance, wasn’t nearly so visible. The 2000 decision to permanently normalize trade relations with China was the subject of debate in Congress, but it wasn’t a major issue in that year’s presidential race because both George W. Bush and Al Gore supported the move.

For Trump and Sanders, the effects of trade with China are emblematic of larger problems with U.S. trade policy. But pro-trade economists argue there are particular factors that make China unusual. They say China has consistently undervalued its currency, making Chinese products artificially cheap in the U.S. and American products artificially expensive in China. That has caused the trade deficit with China to balloon. Meanwhile, China’s membership in the WTO limits the U.S.’s ability to retaliate.

Perhaps because of that complexity, Trump and Clinton have often taken aim at another, more easily defined target: the Trans-Pacific Partnership, which President Obama signed and is now lobbying aggressively for Congress to approve. But the TPP is a far smaller trade deal than NAFTA and tiny compared with the impact of China; few economists expect it to have much of an impact, good or bad. Whether or not they’re right on their actual policies, Trump and Clinton are right about one thing: When it comes to the impact of free trade, China stands alone.