You know that a president is having a rough time when you start to see speculation that his party would be better off if it replaced him on the ticket.

There has been more of this recently: the political scientist Matthew Dickinson argued that Democrats would improve their chances if Hillary Clinton defeated Barack Obama in a primary challenge. The astute Ed Morrissey of the blog Hot Air wondered if Democrats might benefit if Mr. Obama simply declined to run for a second term.

President Obama’s re-election bid is in quite a lot of trouble, with falling approval numbers and sour economic forecasts. But it’s probably mistaken to assume that those problems would just go away if Democrats replaced him with another candidate.

The evidence, if anything, points in the opposite direction: Mr. Obama is more popular than his policies, and probably gives the Democrats a better chance of maintaining the White House than another Democrat would. Three pieces of data to consider:

First, Mr. Obama’s personal favorability ratings — which continue to average about 50 percent — are considerably higher than his approval ratings, which are now around 40 percent. It’s not uncommon for favorability ratings to track a point or two ahead of approval ratings — but this is a particularly large gap. Voters remain reasonably sympathetic to Barack Obama, the person, even if they’re growing less and less thrilled with his performance.

Can Mr. Obama use that sympathy to persuade hesitant voters to give him another chance? Well, we’ll see. But usually when a party would be better off disposing of its incumbent, it’s because these numbers run in the opposite direction: the candidate has some personal liability that is overshadowing his policy positions. Textbook examples would include former Senator Jim Bunning, a  Kentucky Republican whose old age (and apparent symptoms of senility) concerned voters, or retiring Senator John Ensign of Nevada, who has been involved in a series of scandals. Mr. Obama, by contrast, is young and healthy and has probably had fewer scandals than any recent president.

The second statistic is Mr. Obama’s approval ratings, which, although now rather poor, are no worse than you would probably expect from the sour mood of the country. In fact, for most of his first term, the opposite had been true. Based on the precedent established by past presidents, Mr. Obama’s approval ratings had been several points higher than they “should” have been based on questions about whether the country was headed in the right direction. 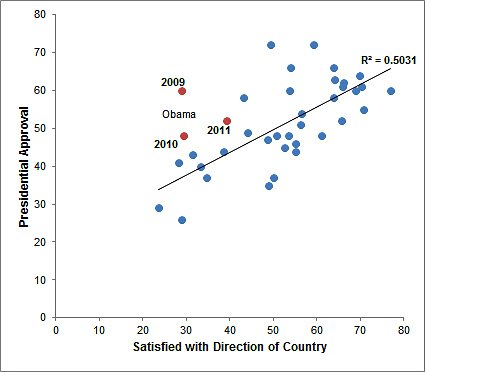 Mr. Obama’s approval ratings have slipped now — but so has the national mood, with recent polls suggesting that only about 17 percent of Americans think the country is on the right track. (The number was closer to 30 percent two months ago.) Mr. Obama’s approval ratings, at 40 percent, may not win him re-election — but seem tolerable by comparison.

To be sure, an argument can be made that Mr. Obama himself bears some responsibility for the pessimistic national mood — particularly in recent weeks, as the latest decline in confidence seems to have as much to do with political as economic factors. If nothing else, Mr. Obama has failed so far to persuade voters that America’s best days are ahead of it.

Then again, approval numbers are down for essentially all incumbent politicians. Quite a few Americans have been tolerant of Mr. Obama’s performance despite their concerns about where the country is headed.

Finally, it’s worth recalling the last major election in which Mr. Obama wasn’t on the ballot: last November’s midterms, in which Democrats lost 63 seats in the House. Although Mr. Obama’s approval rating was middling at the time — about 45 percent — that’s a somewhat worse loss than would have been expected based on his approval ratings alone. 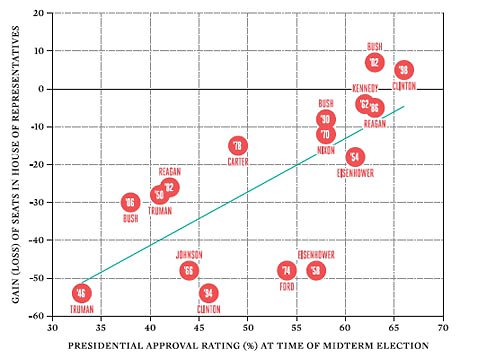 The implicit assumption here, of course, is that another Democrat would not be able to shed Mr. Obama’s liabilities on the economy. Relatively few voters blame Mr. Obama personally for the performance of the economy — they’re simply sick and tired of the poor numbers all the same. Another Democratic candidate would not magically turn 9.2 percent unemployment into 5.2 percent unemployment.

Nor is it likely that another Democrat would advocate policy positions that differed substantially from Mr. Obama’s, which are very close to those of the typical Democrat in Congress. Few Democrats argued against the need for economic stimulus. The health care proposals advanced by Ms. Clinton and John Edwards during the 2008 campaign were not much different from Mr. Obama’s now-unpopular one. Few Democrats have any ideas about how to substantially reduce unemployment that could pass through the Republican Congress.

So the message would be mostly the same — but would be delivered by a Democrat who was probably no more effective a messenger than Mr. Obama, and who would lack the aesthetic and tactical advantages of being an incumbent president.

Instead, if Mr. Obama declined to run for a second term, Democrats would have to deal with questions about why their president had quit on the job, something which would be read as an admission of failure and which would make his record even harder to defend. The two most recent presidents who declined to run for another term while they were eligible for one, Harry Truman in 1952 and Lyndon B. Johnson in 1968, both saw their successors lose their elections despite a prosperous economy.

Certainly, Mr. Truman and Mr. Johnson had other concerns to deal with, like the Vietnam and Korean Wars. But Adlai Stevenson and Hubert Humphrey were attacked on those issues just as an incumbent might have been.