But in 2020, 18 of these 19 “bellwether counties” voted for former President Donald Trump. Just one — Clallam County, Washington — voted for President Joe Biden.

The Trump era made us rethink a lot about politics and elections in America, including the counties that are useful barometers of the national political environment. And like so many electoral trends, demographics play a major role in explaining why these once-bellwether counties finally missed the mark in 2020.

[Even Though Biden Won, Republicans Enjoyed The Largest Electoral College Edge In 70 Years. Will That Last?]

These former bellwether counties are much whiter and less college-educated than the country as a whole. For instance, Washington County, Maine — the median bellwether county in terms of its share that’s non-Hispanic white — is 89 percent non-Hispanic white, which is much higher than the overall U.S. population that identifies as such (60 percent). It is also not as educated: Just 22 percent of adults 25 or older have a bachelor’s degree or higher, which is substantially lower than the 32 percent who have a college degree nationwide. 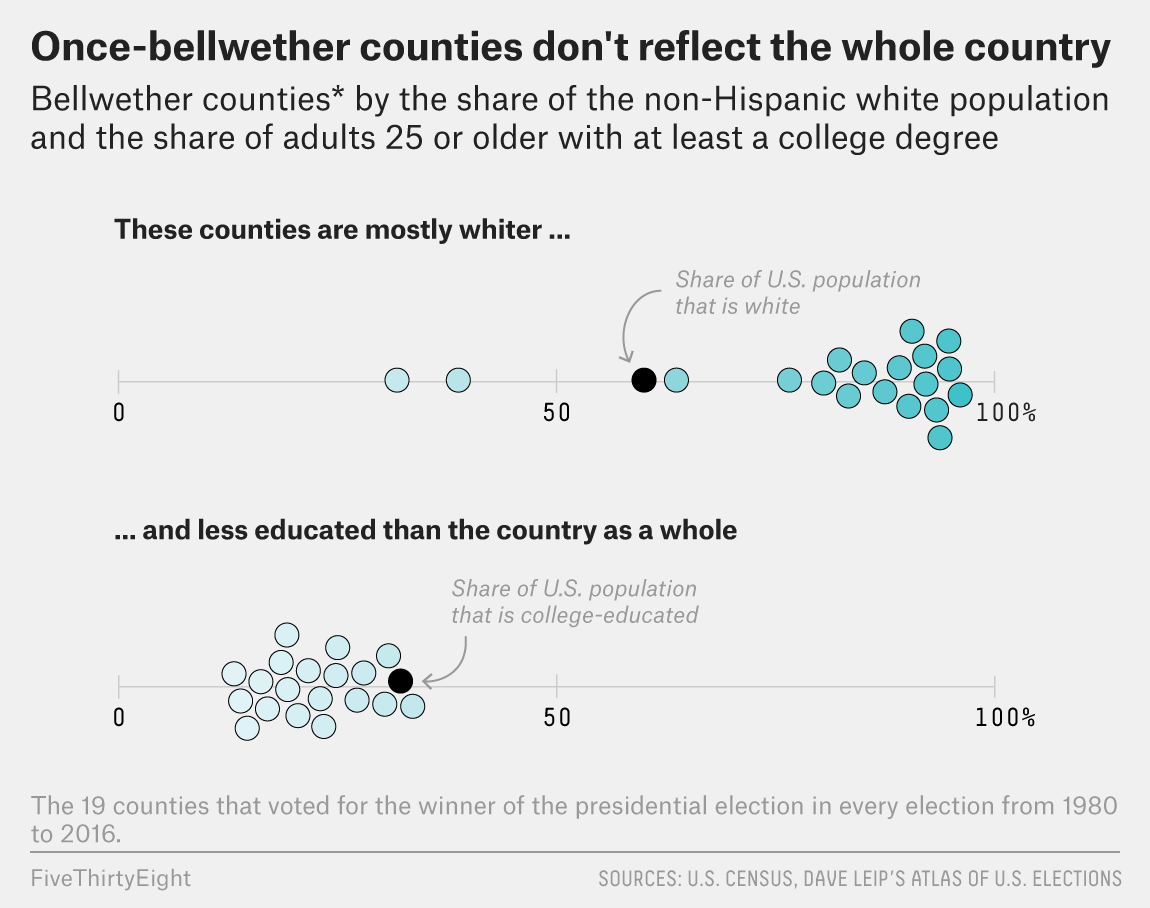 White voters without a college degree used to vote more like the country as a whole, which helps explain why these counties maintained their bellwether status for a long time. From 1980 to 2012, for instance, these bellwether counties consistently voted within a few points of the national popular vote. They were particularly representative in 2012, when the average 1980-to-2016 bellwether county was just 0.8 points more Democratic than the nation. But that changed in 2016 when Trump made huge gains with white voters without a college degree. As such, the margins in bellwether counties became substantially more Republican even as the country only became a little more Republican, as you can see in the chart below. 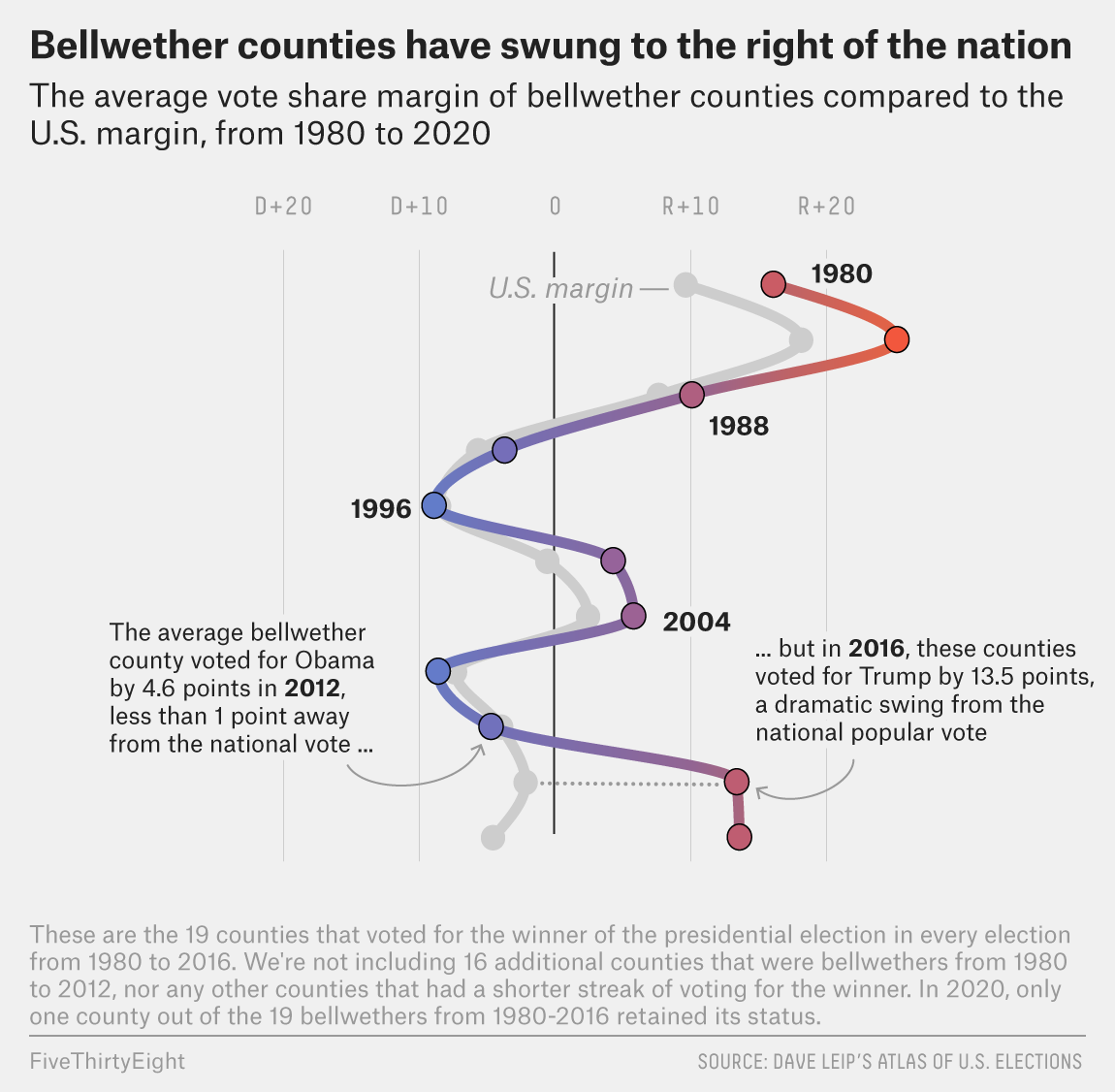 Arguably, it was 2016 — and not 2020 — when bellwether counties first showed signs of falling by the wayside, given their dramatic swing to the right in that election. A total of 35 counties voted for the winner of each presidential election from 1980 through 2012. Nineteen of these counties continued their streak in 2016 by voting for Trump, but the remaining 16 counties ended their bellwether streak by voting for Hillary Clinton. In other words, only 54 percent of bellwether counties from 1980 to 2012 kept their status in 2016. And notably, the 16 counties that lost their bellwether status in 2016 are more racially diverse (median of 46 percent non-Hispanic white, compared to 89 percent) and more highly educated (median of 27 percent of adults 25 or older with a bachelor’s degree or higher, compared to 22 percent) than the 19 counties that maintained their bellwether status.

That Trump did so well in the remaining 19 bellwether counties in 2020 should come as no surprise, then. Trump remained very strong with white voters without a college degree in 2020, helping him win Iowa and Ohio by comfortable margins and remain competitive in Wisconsin, Michigan and Pennsylvania. In total, Trump won 18 of the 19 former bellwether counties, winning the average such county by 13.7 points in 2020. And as was true in 2016, those counties voted substantially to the right of the nation. In fact, they became even more Republican — the average bellwether county from 1980 to 2016 voted 18.2 points to the right of the nation. Ultimately, of course, Trump’s strong performance in these counties didn’t matter because of Biden’s gains in the more highly educated suburbs of Milwaukee, Grand Rapids and Philadelphia.

But it’s not just demographic trends driving the loss of bellwether status. Increased political polarization is another reason why fewer counties are consistently indicative of presidential results in recent years. In fact, according to David Wasserman of The Cook Political Report, just 303 counties were decided by single-digit margins in 2016, compared to 1,096 counties that fit that description in 1992. The fact that there are fewer swing counties means that there are fewer potential bellwether counties.

In the end, only Clallam County retained its streak this year. However, its bellwether status is by no means guaranteed in future elections. As we’ve seen in the past two presidential elections, bellwether streaks can be suddenly ended thanks to America’s continually evolving political and demographic trends. Moving forward, it is entirely possible that there will be no single county that consistently indicates the results of a national election.

How the Georgia runoffs changed the ‘polling is broken’ narrative

Ryan Matsumoto is a contributing analyst for Inside Elections. He is based in San Francisco and has also written for NBC News and The Hill. @ryanmatsumoto1