The national polls have been relatively flat since Friday night’s debate — this in spite of the fact that essentially all post-debate surveys had concluded that Obama had “won” the affair. However, not all momentum manifests itself in a candidate converting undecided voters, or flipping voters from the other candidate. Instead, sometimes it looks more like this: 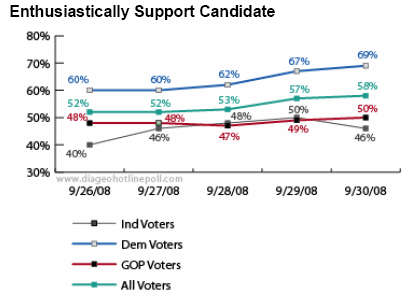 This graph is lifted from today’s release (PDF) of the Diageo-Hotline poll. Note the progression of the blue line … where as 60 percent of Democrats felt enthusiastic about their candidate before, that figure is up to 69 percent now.

There are hints of this pattern in other surveys. Rasmussen reports that 40 percent of voters now have a very favorable view of Barack Obama, the highest that this number has been all year, and an improvement from 36 percent in their last release before the debate. And voters feel safer about Obama. In today’s ABC News poll, which actually had McCain gaining back some ground overall, 55 percent of voters said they considered Obama a “safe” choice, as opposed to 50 percent for McCain. In mid-June, the last time that ABC had asked this question, McCain led in this category 57-50.

So Obama may not have persuaded that many voters on Friday night (I don’t think his performance, frankly, was all that persuasive). But he may have reassured and locked in some of his soft supporters — perhaps Clinton voters and working class Dems.

What that means is that Obama’s floor is higher (and therefore McCain’s ceiling is lower). What it also means is that negative attacks may be less effective for McCain, which are often targeted at soft supporters of the opposing candidate. The CW is that McCain ought to go starkly negative on Obama, but I’m not sure that he wouldn’t stand a better chance by zigging when everyone expects him to zag, rebuilding his inherently strong brand, campaigning on the big-picture themes that dominated the GOP convention, and leaving it to the 527’s to do his dirty work.