I’m curious about the term “died of natural causes” and what ailments/events actually make that term up. It’s not just that one day people die because they’re old, but rather the kidneys or liver go out, or something else.

You’re right. The term “natural causes” tends to be used as an explanation when older people die. It’s almost used as a euphemism for “died of old age,” which I think most people recognize doesn’t really mean anything — but is “natural causes” equally hollow?

It does mean something according to the Centers for Disease Control and Prevention (CDC). A natural cause of death is anything that isn’t a non-natural cause of death (I know, I know, bear with me). When people kill themselves, are killed by someone else or die as the result of an accident, that’s considered non-natural. Any other cause is “natural.”

According to the latest CDC data, 2,596,993 people died in the U.S. in 2013. The vast majority of those deaths, 92.5 percent, were of natural causes. Thankfully, the data is more detailed than that, though — there are 46 categories of natural causes of death listed, as well as 44 subcategories. In the chart below, I’ve summarized the 10 natural causes responsible for the most deaths in 2013.

If I included everything, I’m afraid the chart would be a little too long — but you can find a full table of every cause that accounted for at least 0.1 percent of all deaths at the end of this article. That threshold does mean I’ve had to leave out some unusual causes of death, though. Like syphilis (which killed 49 people in 2013), salmonella (40 deaths), whooping cough (12), malaria (10) and scarlet fever (which killed one person). 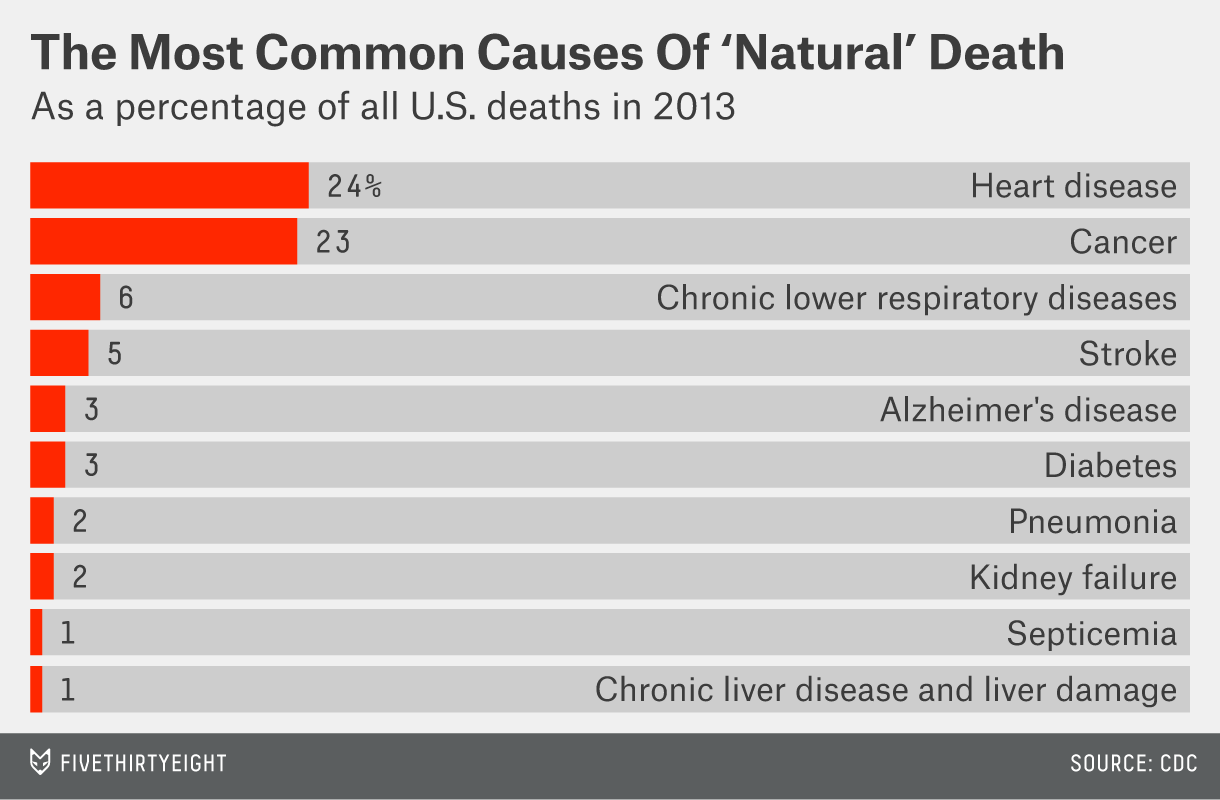 You’re right, Brent: Once you start to unpack the “natural causes” category, things get complicated. After heart disease and cancer, which together accounted for almost half of all U.S. deaths in 2013, the largest category was “all other diseases.” It’s not shown on the chart, but this label covers 12 percent of deaths (most of them of people 75 and older, which does make it seem conspicuously like it’s commonly used to describe the deaths of older people).

Because cancer (described in the data as “malignant neoplasms”) accounted for such a large fraction of all deaths, I’ve broken out the 10 biggest cancer subcategories below. 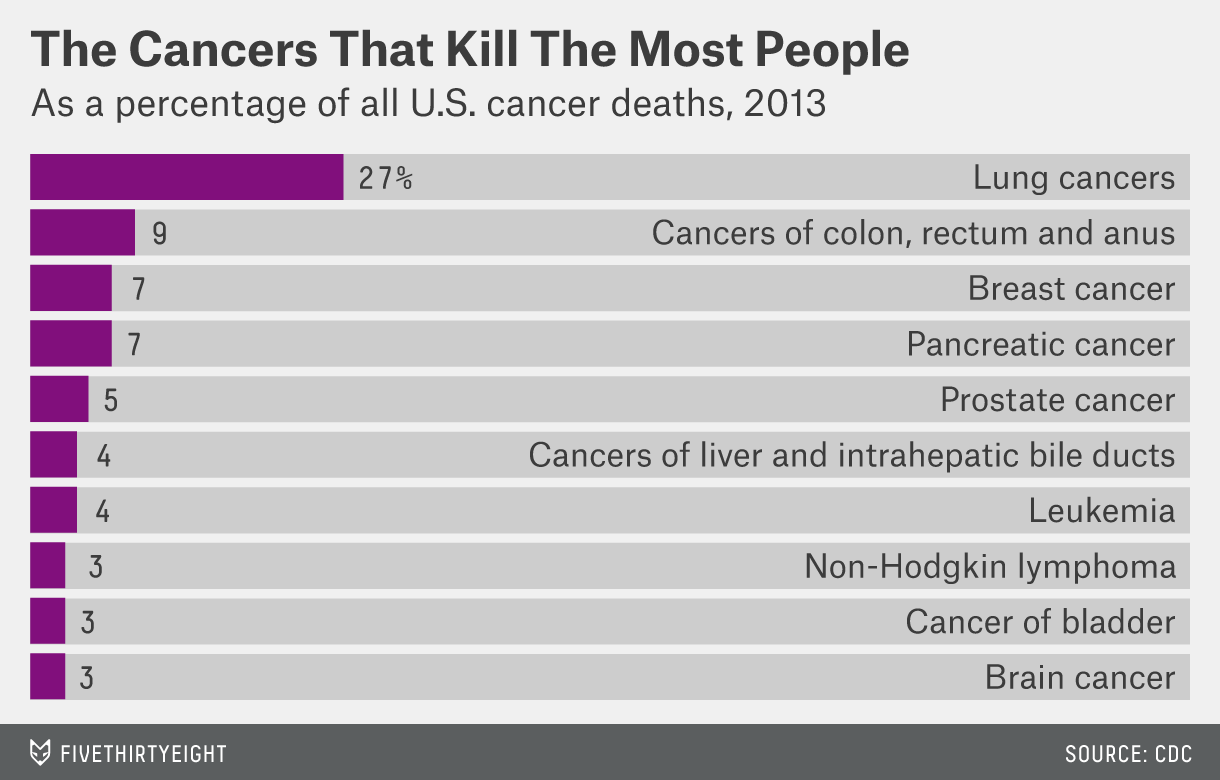 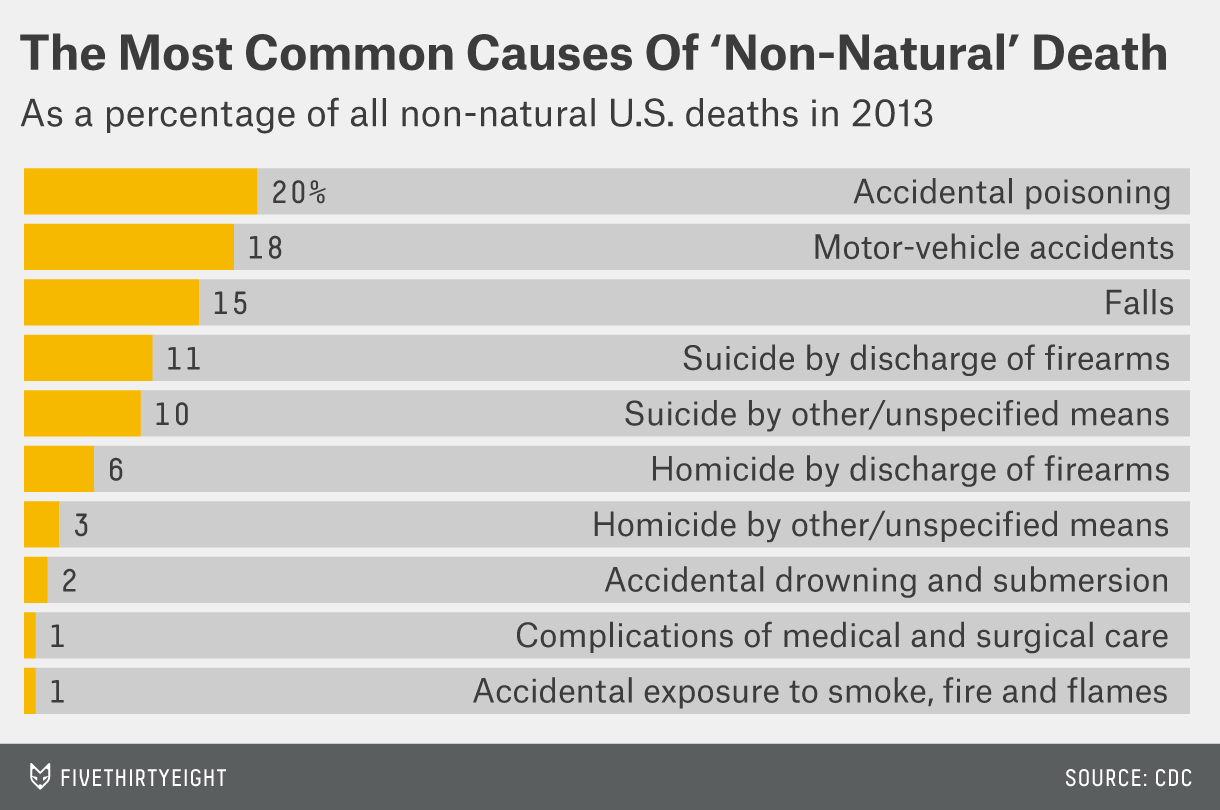 One category is striking here — the 516 deaths in 2013 that come under the label “legal intervention.” According to the World Health Organization codebook, which the CDC uses to classify deaths, this means the deaths resulted from “injuries inflicted by the police or other law-enforcing agents, including military on duty, in the course of arresting or attempting to arrest lawbreakers, suppressing disturbances, maintaining order, and other legal action.”

In a way, Brent, nobody really dies of “natural causes” — the numbers show there are thousands of diseases and conditions under that label. And yet, it’s equally true that the vast majority of people in America do die of natural causes.