If this year feels hotter than normal, it’s not just you. The National Oceanic and Atmospheric Administration just released a report saying that the first half of 2015 was the warmest January to June on record. Most of the world — particularly the western United States — experienced above-average or even record-setting high temperatures this year.

In fact, the 12-month period from July 2014 through June 2015 was the warmest ever recorded. I was curious to see what these record-setting temperatures looked like in more detail, so I updated a famous New York Times weather chart to show the past 12 months of temperatures for a handful of large cities across the U.S.1

These charts show the record, average high and low (“normal range”), and actual temperatures over the past year for each day in each city. Dots indicate days when there was a new record low (blue) or high (red), even if it was only a tie with a previous year.

Each city has a unique story to tell.2 (Click each chart to expand.) 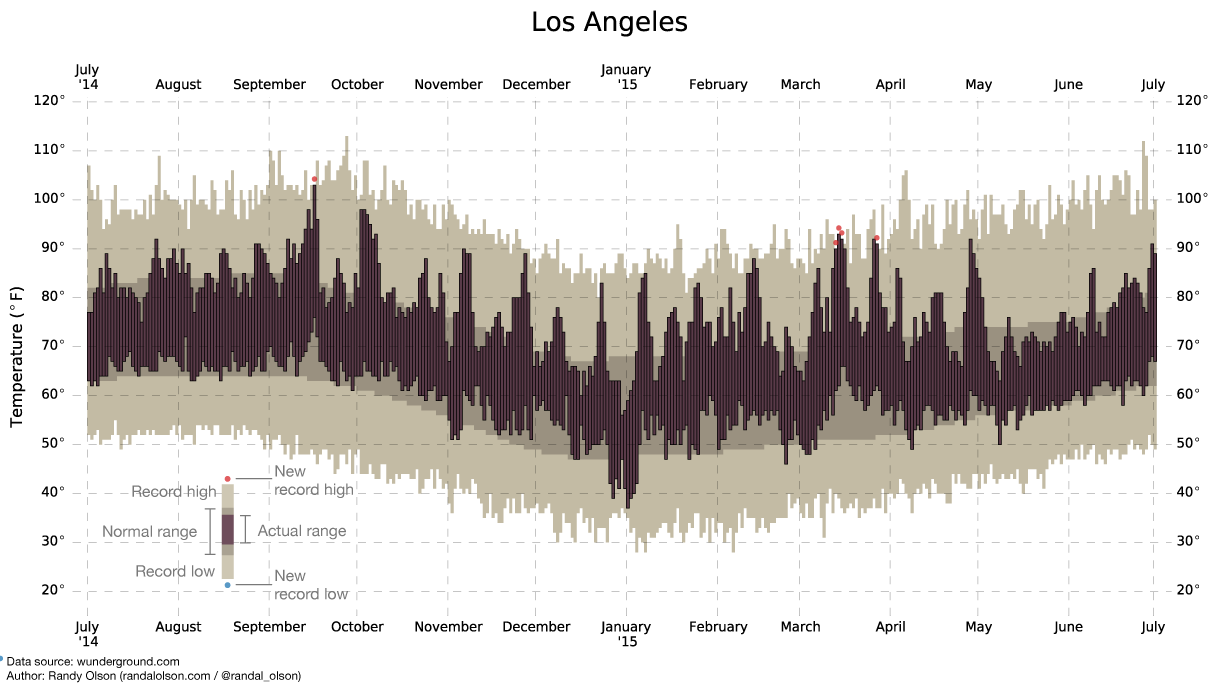 Los Angeles — famous for its year-round just-right temperatures — experienced several heat waves this year. March, in particular, had four days with record highs when the temperature soared into the 90s. 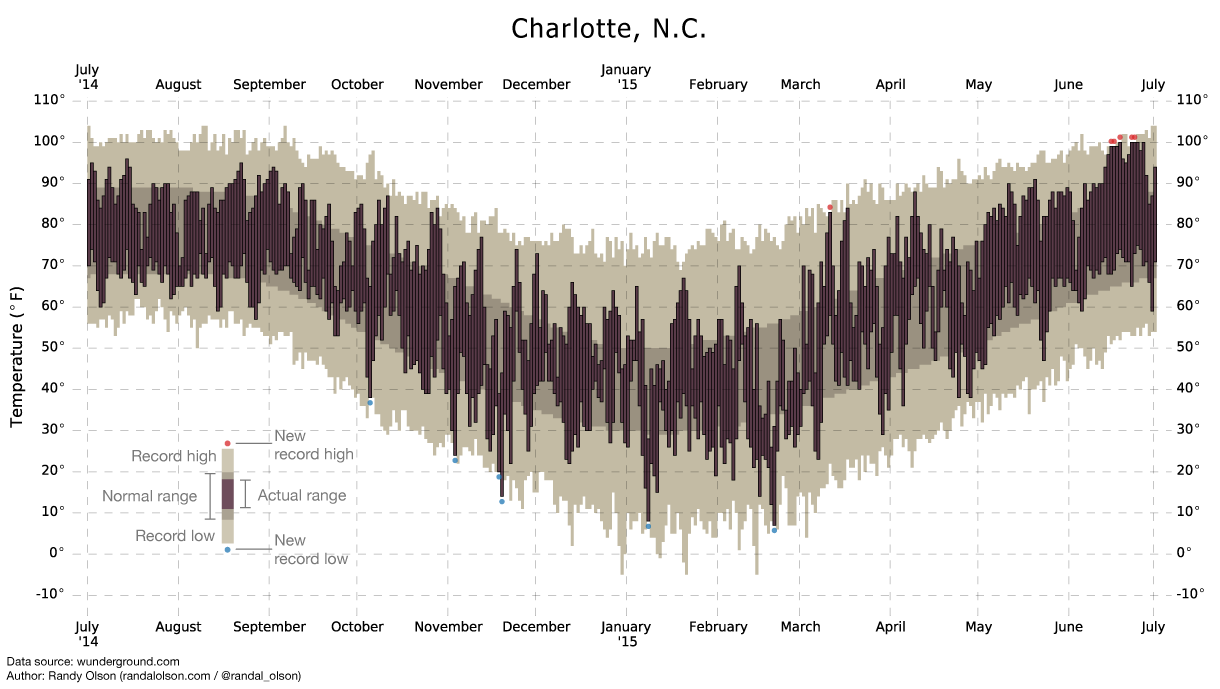 Charlotte, North Carolina, had a particularly uncomfortable June this year, with five days setting record highs in the upper 90s. 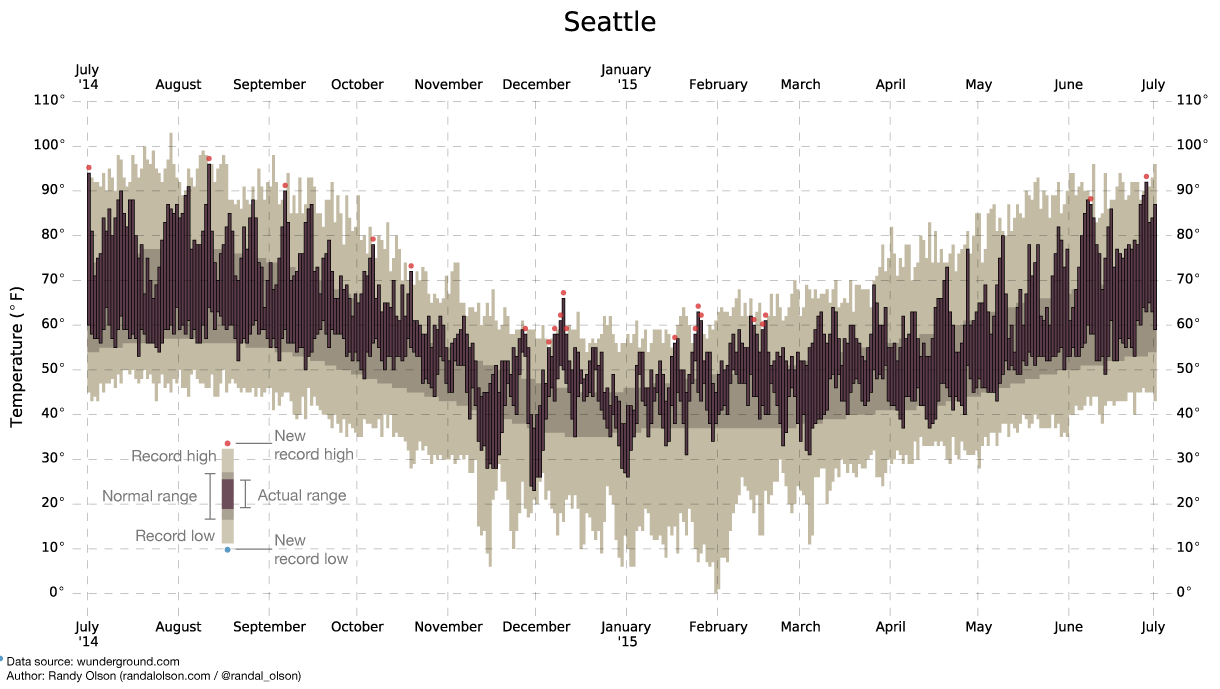 Seattle experienced a strangely warm winter, with 12 days since the beginning of December setting a record high. 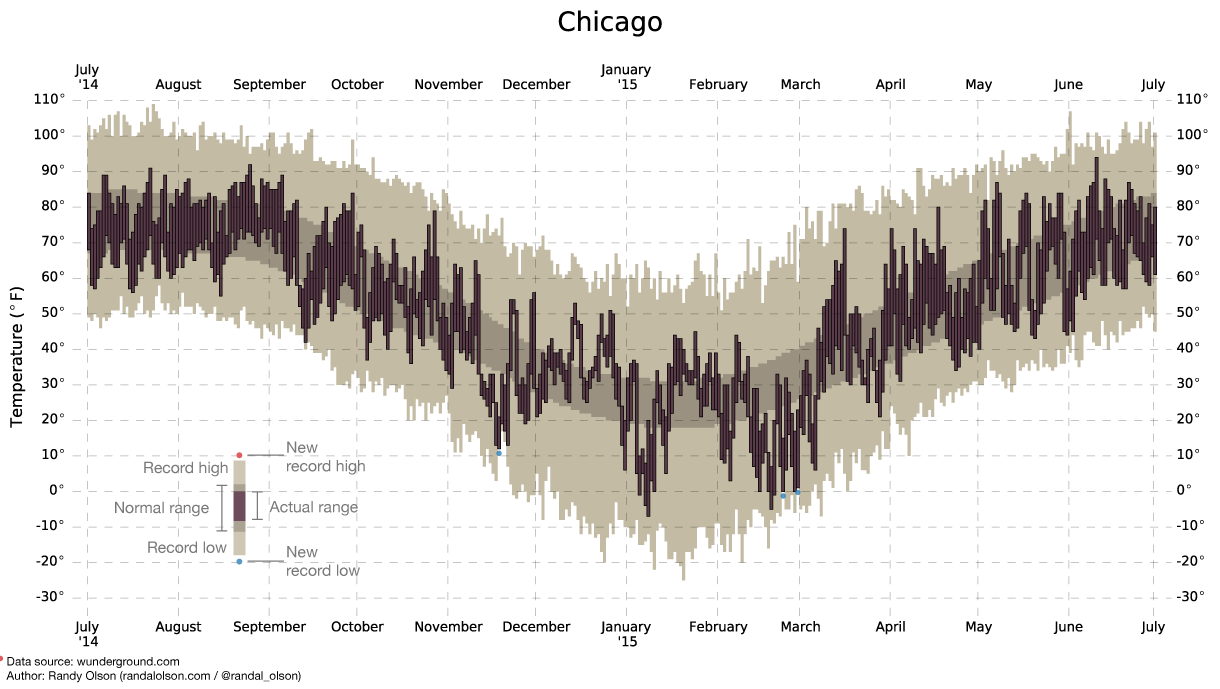 At the other end of the spectrum, Chicago had an unexpectedly cold February, when temperatures returned to single digits and two days reached a record-setting low. 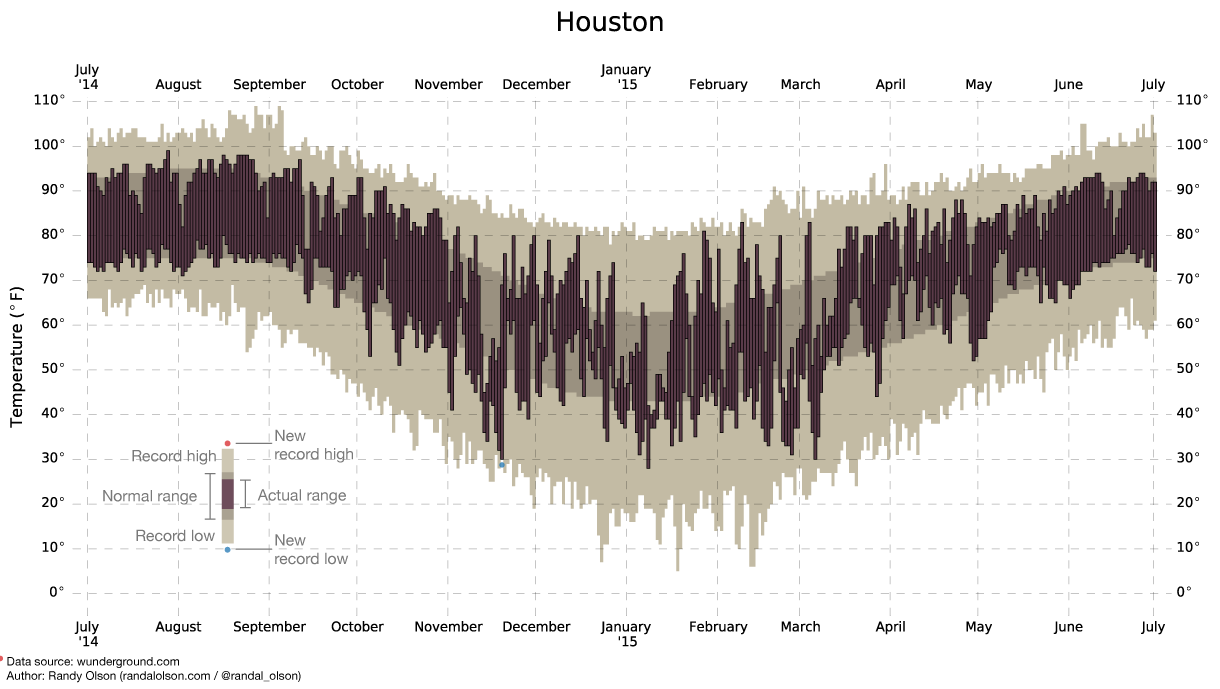 Houston’s temperatures sat around the average for the most part, except for an odd cold spike in November. However, few of the other cities I examined had temperatures that were as consistent as Houston’s: 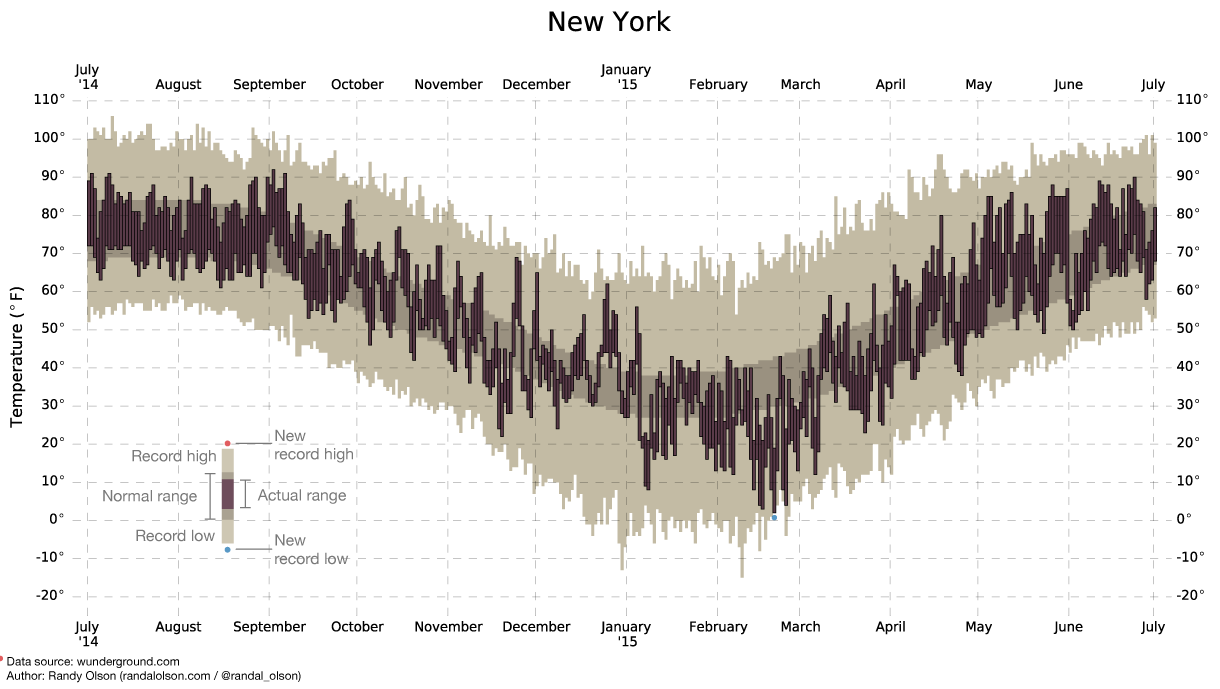 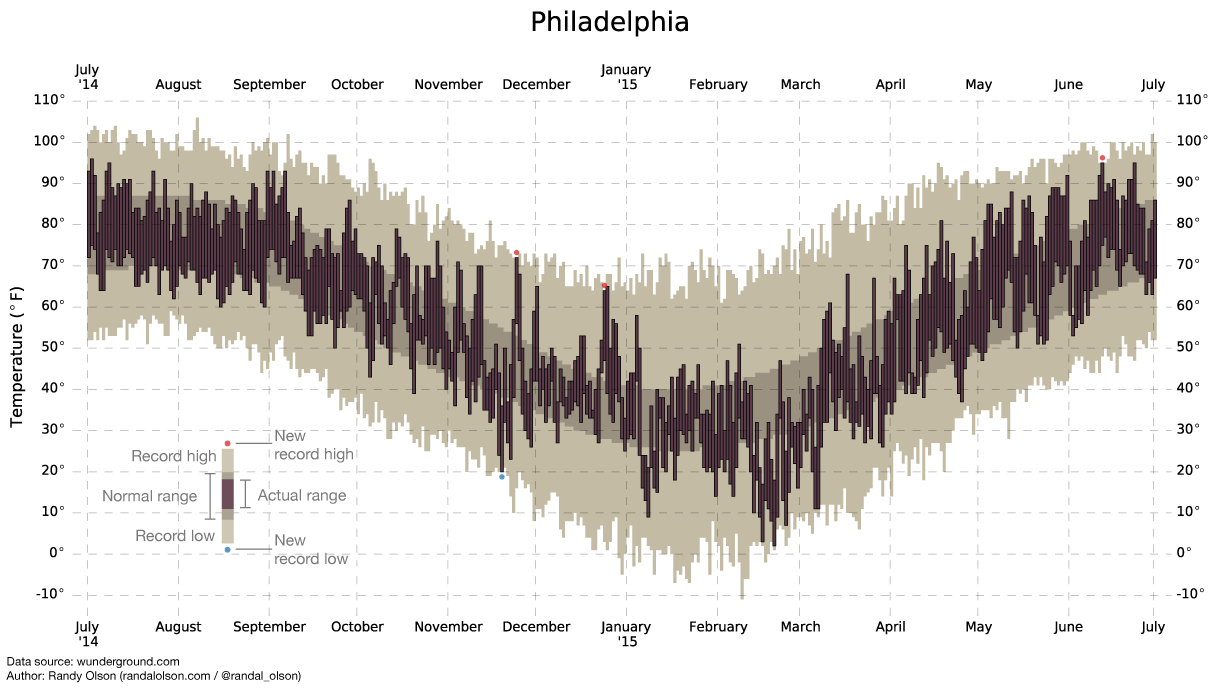 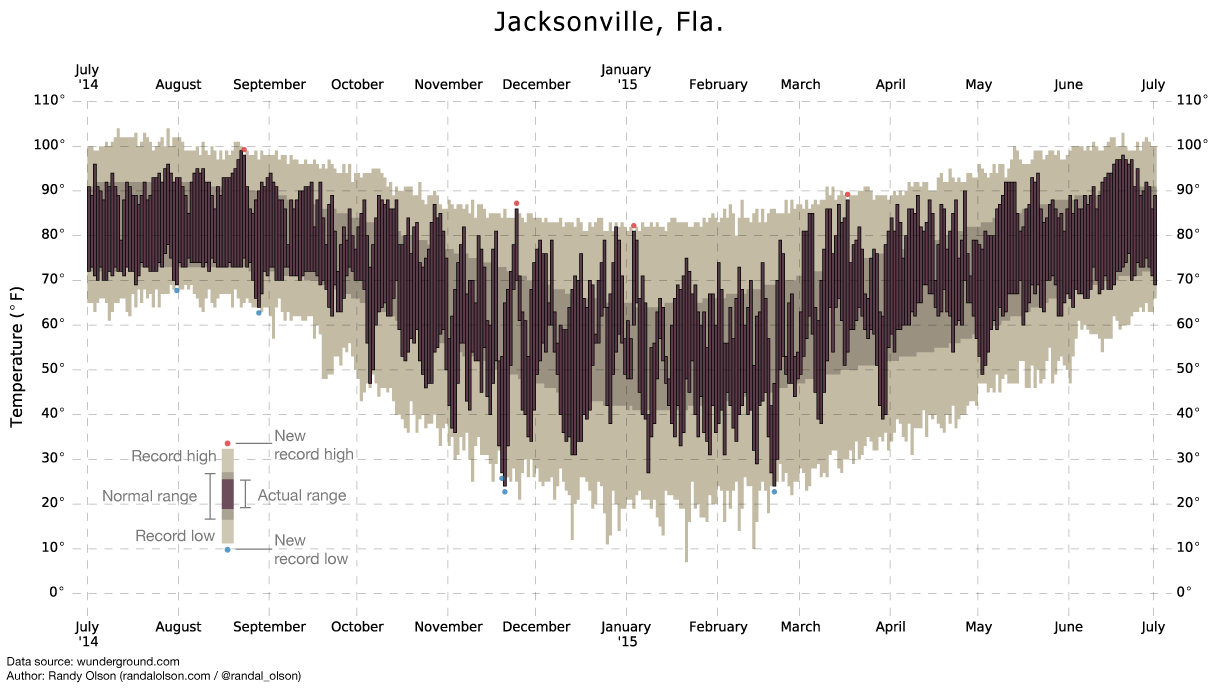 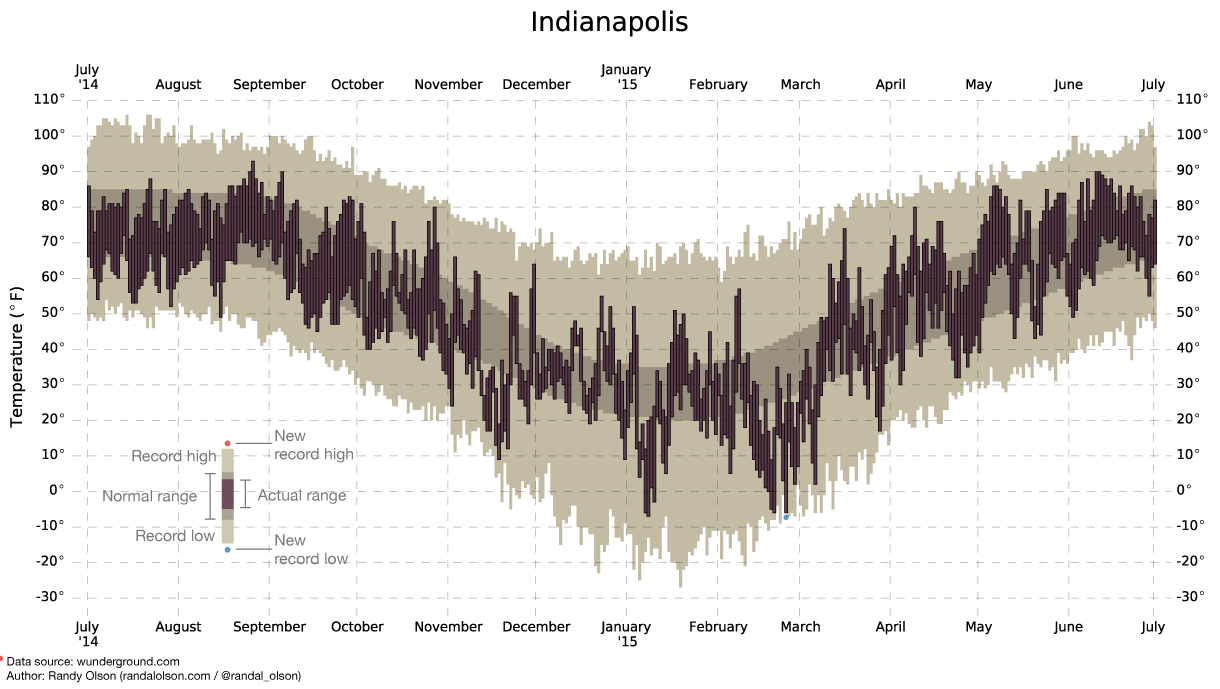 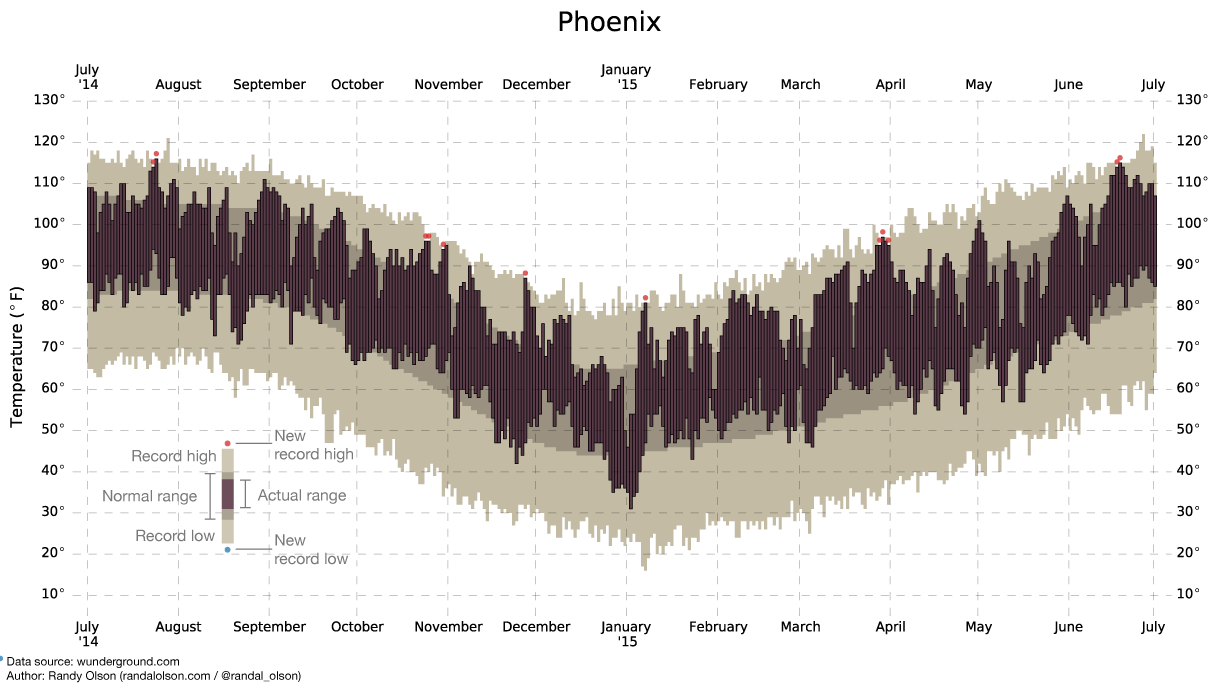 In aggregate, these charts make clear: These last 12 months (or last six), the hottest on record, didn’t necessarily feel that way in every city in the U.S. Many cities experienced heat waves and even cold snaps that set records, but others, such as Houston, did not. In general, climate change is expected to affect different parts of the country differently and ultimately has consequences lasting beyond a single abnormally hot or cold day. That’s why, when studying climate, it’s usually best to take the broad view.

Randy Olson is a postdoctoral fellow at the University of Pennsylvania, where he researches artificial intelligence, machine learning and data visualization. He writes at randalolson.com/blog.
@randal_olson