The stock market, digesting Friday afternoon’s news of a breakdown in negotiations between President Obama and the House speaker, John A. Boehner, on plans to raise the federal debt limit, behaved relatively calmly today, with the Dow Jones shedding 0.7 percent to close at 12,593 points.

Should investors be more worried? Perhaps. Wall Street has trouble anticipating unprecedented events. The heuristic “Congress always comes through in the end” has pretty much always been right in the past. But one can point to a number of signs that this time is different.

In particular, there are several pieces of evidence that the Republican House of Representatives is extraordinarily conservative on fiscal issues. According to statistical systems like DW-Nominate, the median voter in the House — who is a very conservative Republican because the Republicans have a reasonably large majority and have very few moderates — may well be more conservative than at any point in the nation’s history, although comparisons become harder to make the further you go back into the past.

But you have a Democratic president and a Democratic Senate — and even if both President Obama and Harry Reid are quite amenable to compromise, there is still an enormous ideological gulf to bridge. Even just considering the House itself, the mechanics of passing a bill are problematic because some Republicans appear unwilling to sign onto any compromise at all, whether because of a philosophical opposition to raising the debt ceiling, the sense that Democrats will ultimately capitulate to a solution as far-reaching as “cut, cap and balance,” distrust of Mr. Boehner and Mr. Obama, or some combination thereof. That means a bill will probably need the support of a significant number of Democrats — and because Blue Dog Democrats are becoming an extinct species, that implies a significant number of liberal Democrats. To get something that is mutually agreeable to at least some members of Republican Study Committee and the Congressional Progressive Caucus is going to be extremely difficult.

Moreover, a precedent the markets may see as comforting — the passage of the Troubled Assets Relief Program through Congress in late 2008 after the Dow Jones lost 777 points — could reverberate upon the endgame in a negative way. There is evidence that voting for the bailout program may have been directly responsible for costing some members of Congress their seats. Although voting for a debt limit increase is not likely to be nearly so unpopular as bailing out the banks — in fact, it’s not clear where public opinion stands about it at this point — that’s something that many members of Congress, especially in swing districts, will have in the back of their minds.

Thus, it’s no surprise that we’ve been through so many plans and so many backup plans. The backup plans to the backup plans — Mr. Reid’s in the Senate and Mr. Boehner’s in the House — are already on unsure footing, according to various reports. In their speeches before the nation tonight, meanwhile, Mr. Boehner and Mr. Obama focused more on ideas that seem to have little chance of passing — the Republican “cut, cap and balance” bill, which has already been rejected by the Senate, and Mr. Obama’s “grand bargain” — hardly an encouraging sign with the deadline just a week away. (Stock market futures declined slightly as the speeches were being delivered.)

But let’s abstract ourselves from the situation for a moment. (Just as someone on Wall Street could plausibly be naïve about the political danger at hand, someone in Washington could easily be a bit too close to it.)

What we know is that any deal on the debt ceiling was likely to come later rather than earlier in the process — that’s the nature of almost any complicated and high-stakes negotiation.

Assuming that the failure to close a deal within the 30-day window is tantamount to a debt default, that would produce a chart that looks like this: 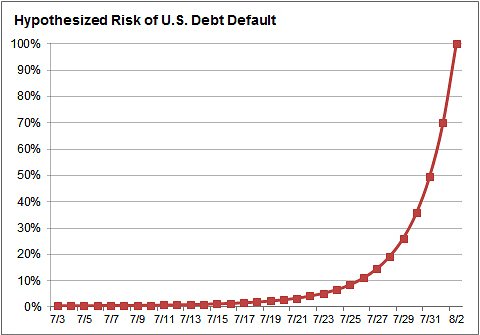 The salient features of this model are as follows. First, the initial estimate of default risk is quite low, and remains quite low for some time. It doesn’t mean that much when 5 or 10 or even 20 days go by without a deal because a deal was unlikely to have been closed so quickly in the first place. But second, the risk of a default starts to increase exponentially as we get nearer to the deadline. Not only are there fewer days remaining, but each day that passes without a deal is also of more consequence. As leaders fail to close a deal with more and more pressure upon them, it’s a sign that something has gone seriously wrong with the political system.

Hypothetically, the model would posit that the failure to have closed a deal today, July 25, had increased the risk of a default by a little less than 2 percent. But that was enough to send the Dow down by 88 points. If you do the extrapolation, it implies that the markets could lose another 4,400 points or so if a deal is not completed by the deadline.

The real world, of course, is considerably more complicated. You’d have to account for possibilities such as that the Treasury actually has another week or so worth of slack, and that Mr. Obama would cite constitutional provisions and would act to prevent a default if he were left with no other choice.

The point is, however, that it does not necessarily tell us very much that markets have been “well behaved” so far. We’re just now nearing the inflection point where we go from brinksmanship — a negotiating tactic — to the risk of an actual disaster.

What we should see, of course, is the pressure tending to mount on the markets with each remaining day, although the trajectory could be noisy within any 24-hour period because of contingencies related to the negotiations and to the broader economy.

If markets don’t start to react more strongly, the appropriate conclusion may be that Wall Street is as out of touch as Washington.