When Kathy Nickolaus, the county clerk in Waukesha County, Wisconsin, spoke to the press on Thursday after revealing that she had failed to count more than 14,000 ballots in the hotly contested state supreme court election, one might have expected her to offer her resignation.

Instead, Ms. Nickolaus blamed “human error” for the problem, which resulted in the failure to tally any votes from the city of Brookfield, which accounts for about 11 percent of her county’s voters. Most of the 14,315 uncounted votes were cast for the more conservative candidate, David Prosser.

As a result, Mr. Prosser — who had been about 200 ballots behind JoAnne Kloppenburg in a contest that seemed bound for a recount — had a net gain of more than 7,500 votes, and now has an overall lead of about that size. Although the election may still go to a recount, it is now highly unlikely that the outcome will change, unless another county discovers a discrepancy of the same magnitude, but in Ms. Kloppenburg’s favor.

The human who made the error was none other than Ms. Nickolaus, who said she had failed to save a computer file after entering Brookfield’s results. It is hard to excuse the mistake, which was of a considerably larger magnitude than anything that happened in an individual county during the controversial recounts in Florida or Minnesota.

There are, of course, suggestions in some liberal-leaning blogs that Ms. Nickolaus (who has worked for Republicans in the past) is attempting to steal the election. But a look at the turnout estimates in Waukesha County, before and after the problem was corrected, suggest that her mistake was probably an honest one. The original turnout figure was somewhat lower than what might have been expected statistically, and the revised one is more in line with reasonable expectations.

In the gubernatorial election in 2010, Waukesha County, a Republican stronghold, had the highest turnout among the 72 counties in Wisconsin. Of its 261,405 registered voters, 188,278, or 72 percent, cast a legal ballot in that race, well above Wisconsin’s statewide turnout of 62 percent.

The county also had above-average turnout in the primary in February, in which Mr. Prosser, the incumbent, and Ms. Kloppenburg won the two spots on the general-election ballot in a four-candidate contest: the county’s turnout in the primary was 14 percent, compared with the state average of 12 percent. The same holds true for the presidential race of 2008, when 89 percent of the county’s registered voters cast ballots, compared with 86 percent for Wisconsin as a whole.

By contrast, when Waukesha County’s results in the judicial election were first announced results on Tuesday night, the turnout appeared to have been 42.3 percent, slightly below the statewide average of 42.7 percent. Now, with the Brookfield ballots included, the county’s total is now 47.8 percent, more consistent with its past pattern of slightly exceeding the statewide figure.

Each election is different, of course. The fact that Waukeshans voted at higher-than-average rates in the past wouldn’t guarantee anything this time around. And this election was unusual — a contest for a pivotal court seat, but also something of a confidence vote on Gov. Scott Walker, who has been engaged in a fierce battle with unions and their supporters and has seen his popularity wane in public opinion polls.

So it might be useful to look at turnout figures from other counties in Wisconsin, whose figures (as far as we know) are reasonably sound. Here is a graphic, for instance, comparing turnout rates in last year’s gubernatorial election with the judicial election on Tuesday. The red circle represents the originally reported figure for Waukesha County, and the green circle its vote after the recanvassing. The blue circles represent the other 71 counties in Wisconsin. 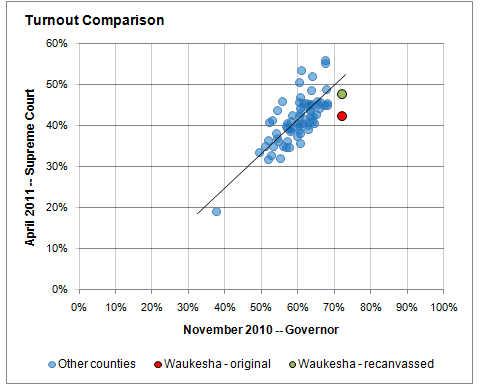 As you can see, turnout in 2010 was a reasonably good predictor of the turnout this week. Based on 2010, Waukesha County’s turnout “should” have been about 51.5 percent, plus or minus some margin of error. Its revised figure of 47.8 percent is closer to that expectation than the 42.3 percent figure originally reported.

We can also look at how turnout in the presidential election of 2008 compared with this week’s election: 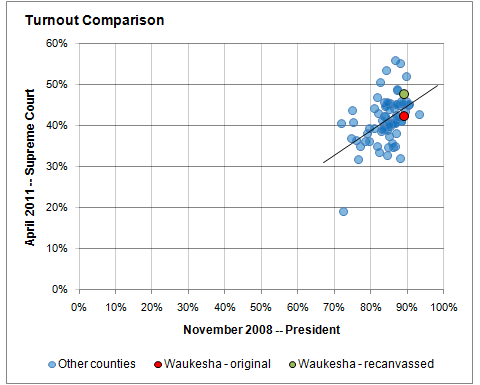 This model predicts that Waukesha County’s turnout ought to be about 44.6 percent, which is in between the original and revised figures. Note, however, that the data does not fit quite as well: the results from the other counties are more spread out along the regression line. What that means is that 2008 turnout did not predict this year’s voting as well as 2010 turnout did. Though this evidence is more equivocal as to which turnout figure is the right one, it’s also less salient to the question.

The same holds true for the February supreme court election: 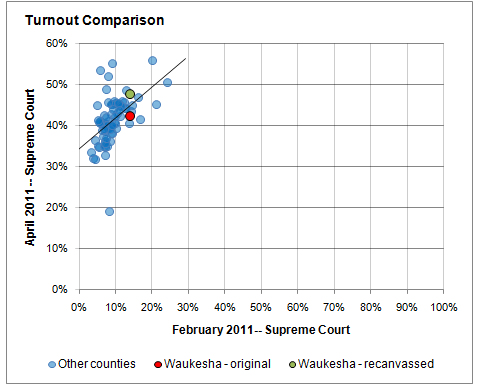 Here again, Waukesha County’s expected turnout falls between its original and revised figures. But again the fit is not terribly strong, so this represents a rougher guess than we get from using the 2010 data.

A better way to think about this is in terms of a 95 percent confidence interval, or margin of error. For instance, based on the 2010 data, we’d estimate that Waukesha County’s turnout should have been 51.5 percent, plus or minus 7.8 percent, meaning that there was a 95 percent chance that the true figure was in the range of 43.7 percent to 59.3 percent. The original turnout estimate, 42.3 percent, falls outside this range, meaning that we can be fairly confident that something unusual (like failing to count an entire city’s ballots) had occurred. 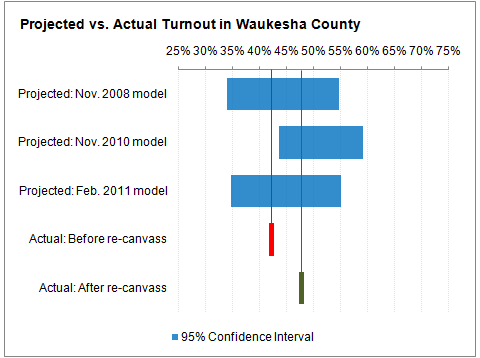 True, if we attempt to forecast Waukesha County’s turnout based on the 2008 or February 2011 data instead, the original turnout figure falls well within the margin of error — but so does the revised one, so this doesn’t tell us anything especially interesting.

If one wanted to argue that Waukesha County’s turnout ought to have been moderate or low — despite its having been above-average in the past — a reasonable justification might be that the county doesn’t have very many unionized workers, and is dominated by white-collar private businesses like General Electric, which has a large complex there. Union workers, especially in the public sector, probably had the most at stake in the judicial election, since the winner is likely to be called on to rule on the controversial legislation that state Republicans passed to roll back collective bargaining rights.

No data is available on unionization rates at the county level in Wisconsin. What we can look at, however, is the percentage of workers in each county who work in state or local government, about half of whom are unionized statewide. This data is available in the Census Bureau’s American Community Survey. It turns out that about 7.5 percent of the employed population in Waukesha County works for state or local government, as compared with 11 percent for Wisconsin as a whole.

So far, the best predictor we’ve found of turnout in this week’s election is turnout in 2010. If we run a regression analysis and also include the share of state and local government employees as an explanatory variable, it does have a statistically significant effect (provided that we weight the regression by the number of registered voters in each county). However, this reduces the turnout prediction for Waukesha only slightly, and the figure that was originally reported still falls outside the 95-percent confidence interval.

The same holds true if we run a “kitchen sink” regression analysis that includes a couple of other variables that appear to have some predictive power, like the percentage of people who voted for Governor Walker in November and the percentage of voters who are white. 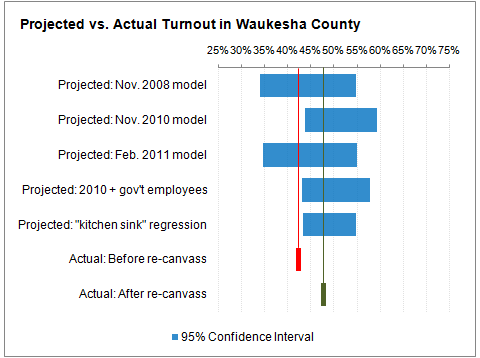 I’m deliberately not going into very much detail on this analysis because it basically tells us the same story that the simpler approaches did: There is no evidence that Waukesha County’s revised vote count is unusually high, whereas there is some evidence that its original vote count was unusually low.

This evidence is reasonably (though not overwhelmingly) convincing: Waukesha County’s turnout rate was too low according to some versions of the model, but it was a modest outlier rather than an extraordinary one. Put differently, if there hadn’t been some concrete reason to suspect that the original figure was off, I don’t know that it would have raised any red flags from a statistical perspective.

Nevertheless, if you want to allege that there’s a conspiracy afoot, the statistical evidence tends to work against you. Waukesha County’s revised turnout figures are pretty normal for Waukesha County, a wealthy, white suburban county that usually votes at high rates, whereas its original figures were at the low end of reasonable expectations, given the way the rest of the state voted.

Also of note is that the number of votes that Ms. Nickolaus says she failed to count in Brookfield, amounting to 11 percent of the county total, is in line with the proportion Brookfield normally represents: the city supplied 11 percent of Waukesha County’s total vote in both the 2008 and 2010 general elections.

If this was a conspiracy, it was one executed with an extraordinarily high degree of cunning and competence. I’m more inclined to think that Ms. Nickolaus, who has drawn complaints for her sloppy management practices in the past, is no savvier than she seems.

If you’re still not persuaded, you’re welcome to play around with the data yourself, which you can download as an MS-Excel file here.