Whether Mitt Romney has gained ground on Rick Perry in the Republican primary race is questionable. Polls released since Mr. Perry’s first debate on Sept. 7 show him leading Mr. Romney by an average of 8 percentage points. By contrast, Mr. Perry led Mr. Romney by 11 points in polls released between the announcement of his candidacy on Aug. 13 and the Sept. 7 debate.

There is some clearer evidence, however, that Mr. Perry’s numbers have worsened some among general election voters.

First, we can look at Mr. Perry’s favorability ratings among the broader electorate.

Three polling firms asked voters for their views of Mr. Perry between the announcement of his candidacy and that first debate. In those surveys, views on Mr. Perry were equally divided. An average of 29 percent of Americans said they had a positive view of him and 29 percent a negative view, with the remaining 42 percent not yet knowing him sufficiently well or not yet having formulated a firm opinion.

Mr. Perry’s numbers have been in net-negative territory in four polls released since the first debate, however. On average, 27 percent of respondents held a positive view of Mr. Perry in these polls, while 38 percent held a negative one.

Although few of these pollsters provided a partisan breakdown of their results, Mr. Perry’s numbers do not appear to have declined appreciably among Republicans. So one can infer that the movement has probably been caused by independent voters and Democrats.

The trend of the past few weeks may or may not be indicative of their future trajectory. Nevertheless, of voters who have formed an opinion of Mr. Perry so far, almost 60 percent in post-debate polling hold a negative view. 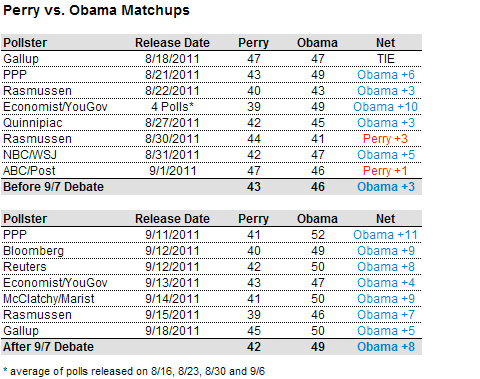 Surveys released between the announcement of his campaign and the first debate had Mr. Perry trailing Mr. Obama 43 percent to 46 percent on average, with a couple of the polls actually giving him a slight lead.

Mr. Perry has trailed Mr. Obama by an average of 42 percent to 49 percent in surveys released since the debate, however.

Polls of horse-race match-ups can often underestimate the standing of candidates with poor or middling name recognition — one of a number of reasons that the White House shouldn’t feel terribly excited about these numbers.

Still, that Mr. Perry’s numbers have gotten worse as he has become better known — and as Mr. Obama’s approval ratings have been low and steady at best — is a poor sign for his campaign.

Moreover, these name-recognition effects usually manifest themselves in lower support for the challenger rather than higher support for the incumbent (voters may say they are undecided if they are not yet sufficiently familiar with a candidate, even if they are likely to support him eventually). But in four of the seven head-to-head polls released since the first debate, Mr. Obama has gotten 50 percent of the vote or more in the hypothetical match-up against Mr. Perry, meaning that the effects cannot be accounted for by undecided voters alone.

It seems possible that if Mr. Perry is the nominee and if economic performance continues to be sluggish, we could wind up with an incumbent president whose disapproval rating is at or above 50 percent matched up against a Republican opponent whose unfavorable rating is also in the 50s. There’s not a lot of historical guidance on what might happen between this proverbial rock and hard place.