Relatively little change today among the top three positions, with the United States, Canada and Germany all projecting to a virtual dead heat in terms of the overall medal count. Methodology and yesterday’s results are here. 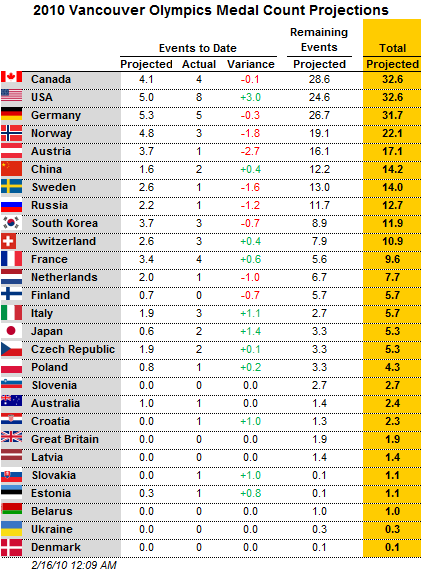 The United States got a somewhat unexpected medal in the men’s downhill today, as Bode Miller took bronze — something which only 2 of 8 forecasters expected. They also took a gold in men’s snowboardcross, although some forecasters had expected them to win 2 medals in that event. Meanwhile, several forecasters had them taking a bronze in the men’s 500m speed skating event, but they failed to do so; they may also take a hit tomorrow when the women’s luge concludes as Erin Hamlin, widely expected to medal, finds herself in 15th place after the first two of four runs.

By popular demand, we can also predict the number of gold medals: 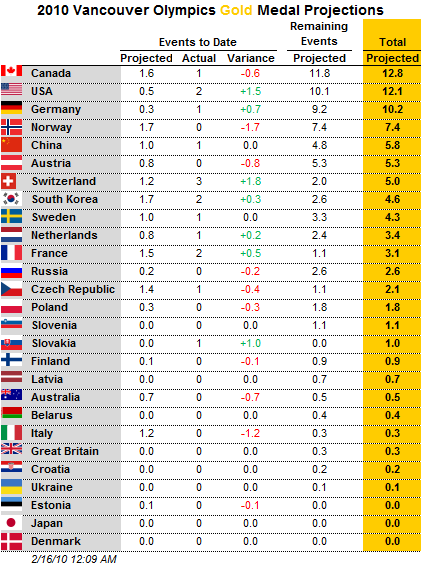 Seth Wescott’s snowcross gold helps the USA more here, as most forecasters had the gold going to France, and it again finds itself in a close contest against Canada and Germany. Norway, which had an outside chance to win the most golds, injured those chances today by failing to take gold (and claiming just one medal) in the two cross-country events that ran today.