Not that you should care what this number-cruncher thinks, but I’m having trouble formulating an opinion over Elena Kagan’s nomination to the Supreme Court. On the one hand, the case for her does not jump off the page. For someone who’s essentially billed as a legal scholar — and I think we should have some people like that on the Court, just as we have some who come from more applied backgrounds — her scholarly record is not overwhelming. It’s also not underwhelming, as Eugene Volokh makes clear — in fact, judging by the number of citations her articles have received, it’s rather impressive in context. But she hasn’t crossed the Rubicon to become an intellectual heavyweight in the way that, say, a Cass Sunstein or a Larry Lessig has — not that it would help her chances of nomination if she had.

On the other hand, the case against her is also a bit bric-à-brac. In particular, the insinuation that she might not be a fairly reliable liberal Justice — if one cares about such things — is a bit naive. Everything from Kagan’s background to her service on behalf of two Democratic administrations to the testimony of many, many of her colleagues and associates suggests that her basic worldview is that of a liberal, if one who does not see herself as a party to any grand project or movement.

The most tangible thing that we know about Kagan is her age: she’s 50. That’s relatively young for a Supreme Court justice, younger than six current members of the court at the time of their nomination and tied with two others (Roberts and Scalia). It’s especially young for a woman, as women have longer life expectancy. By contrast, the next-most-likely choice, Seventh Circuit Judge Diane Wood, is 59.

Suppose that Wood, who indeed has a longer and more transparent record of liberal jurisprudence, could be counted on to vote with the liberals on the Court essentially always, or at least always on votes where her position would make the difference in the outcome of a case. Suppose that, on the other hand, there is a 10 percent chance that Kagan would swing the vote to a conservative decision on any particular issue. If your goal is to maximize the liberalness of the Court over the long-run (not that it necessarily should be), how much does Kagan’s age make up for this?

According to standard actuarial tables, a 59-year-old woman can be expected to live for another 24 years, and a 50-year old woman 32. That’s quite a large difference: we might expect Kagan to serve on the court about one-third longer than Wood, all else being equal.

What we can essentially do is calculate each woman’s VORJ — Value Over Replacement Justice. (The reference comes a statistic called VORP — Value Over Replacement Player — that was developed by my colleagues at Baseball Prospectus.) We’ll assume that, were Kagan or Wood to die, they’d be replaced by a justice who was equally likely to be liberal or conservative, and would have a 50 percent chance of siding with the liberals on any particular case.

As we go out into the future, however, the Justices become less valuable as they are less likely to survive. For instance, Wood has about an 18 percent chance of no longer being with us 15 years hence, so we’d have to subtract that fraction from her VORJ.

After about 20 years, Kagan overtakes Wood even though she’s less liberal, because she’s more likely to have survived. She continues to provide excess value over Kagan from that point forward, until we reach a period 40+ years out where both women are almost certain to be dead. On balance, Kagan’s lifetime expected VORJ is actually higher than that of Kagan’s (1,280 rather than 1,206, if you care), assuming that she’ll defect from the liberals 10 percent of the time whereas Wood never will. 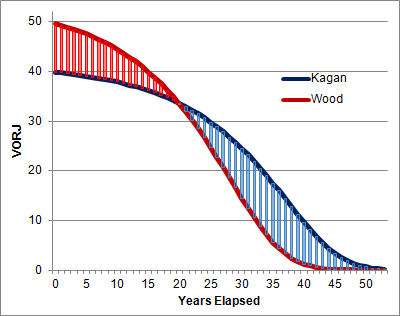 On the other hand, perhaps it’s appropriate to apply a discount factor, since we arguably should care more about what happens now than what happens 30 or 40 years hence. In addition to the usual reasons for applying a discount factor (we’re alive now and allowed to be a bit selfish — and besides, who knows when that asteroid is going to hit and render the Supreme Court moot), there might be some especially good reasons to do so in this instance as we know the Court is about evenly divided now on many issues and as assumptions about judicial philosophy become less reliable as we go out in time. If we apply a discount rate of 5 percent, the present value of Wood’s VORJ is somewhat higher: 685 rather than 632 for Kagan. (In fact, Wood’s score exceeds Kagan’s for any discount rate of 1.7 percent or higher). 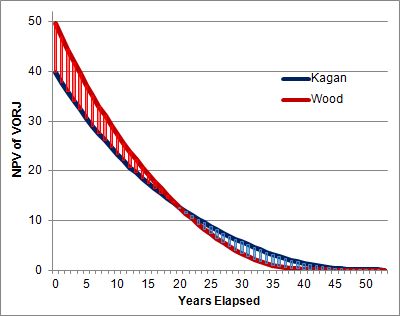 The numbers we’ve looked at here are trivial to calculate, and arbitrary to the point of meaninglessness. The point is simply that (i) Kagan’s relative youth is of some quite tangible value and goes a long way toward mitigating any concern that liberals might have about her judicial philosophy; and (ii) the precise extent to which it has value depends on how much we weight the near-term future of the Court versus the longer-term one. These things, of course, ought to be reasonably obvious, but sometimes they get lost in the pitched and abstract discourse over Court appointments.

EDIT: Obviously an area that I didn’t get into here is the relative health of the two women. I feel a little uncomfortable speculating about that — so I won’t.