This is review No. 6 of 16 in the first round of our competition. Each review will compare four burritos, with my favorite advancing to Round 2.

The essence of the New Mexican burrito is the chile pepper.1 As a testament to the state’s love affair with this vegetable, in 1999 the legislature approved the first official state question, Red or green? — meaning, which kind of chile sauce do you prefer? Red, green or mixed (pronounced Christmas), are the appropriate replies.

Red and green chiles in fact come from the same plant, the green picked when the pods are ripe, the red left on the vine and then dried, on a strand known as a ristra. This week, for the second of four reviews in our West region, I set out to discover what New Mexican chiles can do for a burrito, from Santa Fe in the north to Hatch in the south. 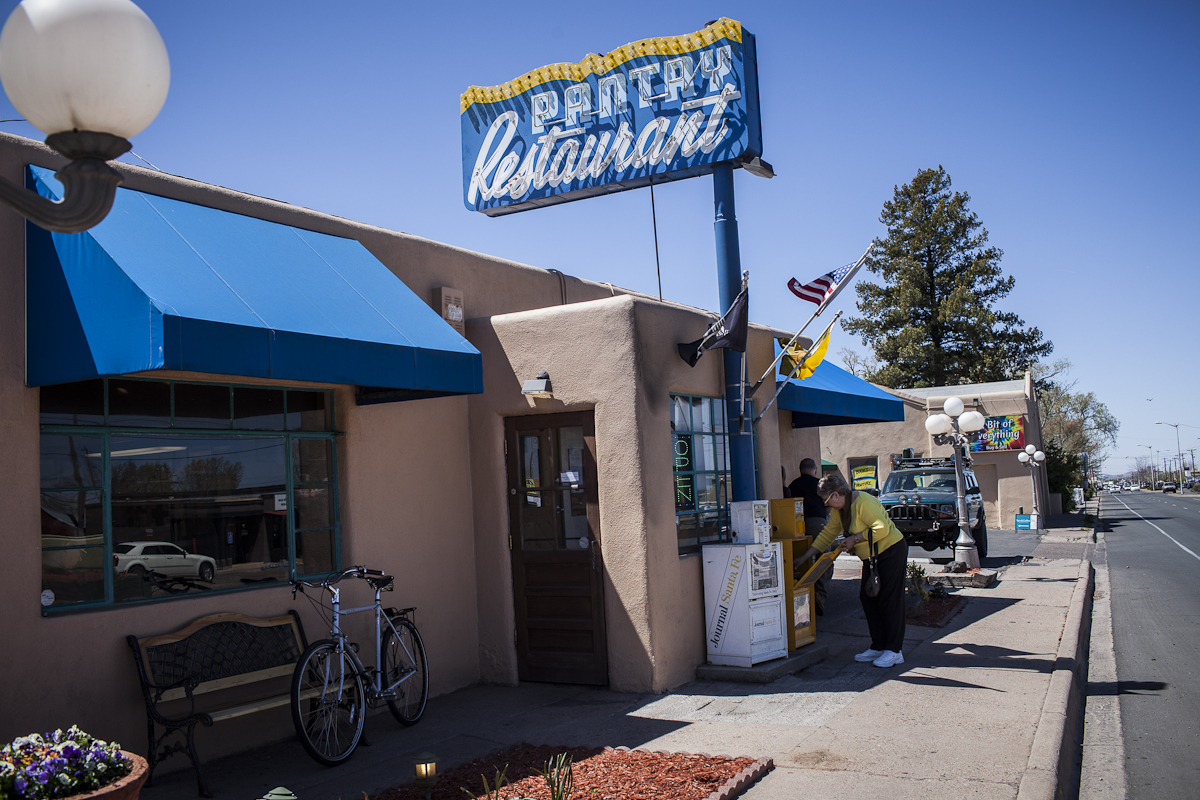 I’ve been visiting Santa Fe since I was a child. My father grew up in New Mexico, and I spent many summers of my youth fending off heat stroke in the surrounding mountains or falling asleep to arias under the stars at the Santa Fe Opera House (before they put a roof over the audience).

I remember having breakfast at The Pantry back then, but it always involved French toast, my sophomoric tastebuds not yet prepared for the joys of adovada. When I arrived on my Burrito Bracket assignment, this time all grown up, I found the burrito listed on the menu under “New Mexican Traditions,” and wondered how I’d let it pass me by for so many years. I ordered it green.

The Pantry’s humble adobe building sits on a busy stretch of Cerrillos Road, a couple of miles from the central plaza, and out of the way of downtown tourists. Opened in 1948, it’s a Santa Fe institution. Diners speak a mixture of English with a strong New Mexican accent, Spanish and Spanglish. The restaurant is diner-like inside, with a countertop and round swivel seats for single patrons, and blue laminate tables and wooden chairs in the front room. An enormous map of New Mexico in the back room shows off the state’s mountain peaks and water sources. Originally, The Pantry exclusively served breakfast and lunch; it added dinner service in 2009, but the early morning and midday fare continue to be the main draw.

The burrito was served on a hot iron plate. A wafer-thin layer of cheddar cheese was broiled on top, and the entire plate was bathed in fresh green chile sauce, with pulpy pieces and hints of heat from the state’s cultural icon. Rice, lettuce, tomato and refried beans were piled on the side. Inside was but one ingredient, adovada, and it was spectacular. Each small chunk of pork was tender enough to disintegrate in my mouth. The meat lay in an abundance of sauce, thick with red chile, vinegar and cumin. I couldn’t figure out all that had gone into the heavenly liquid, but I also couldn’t stop eating long enough to give it much thought. This was the best adovada I’ve ever eaten. I took the dissected burrito home with me and nibbled away at it between meals for the next two days. 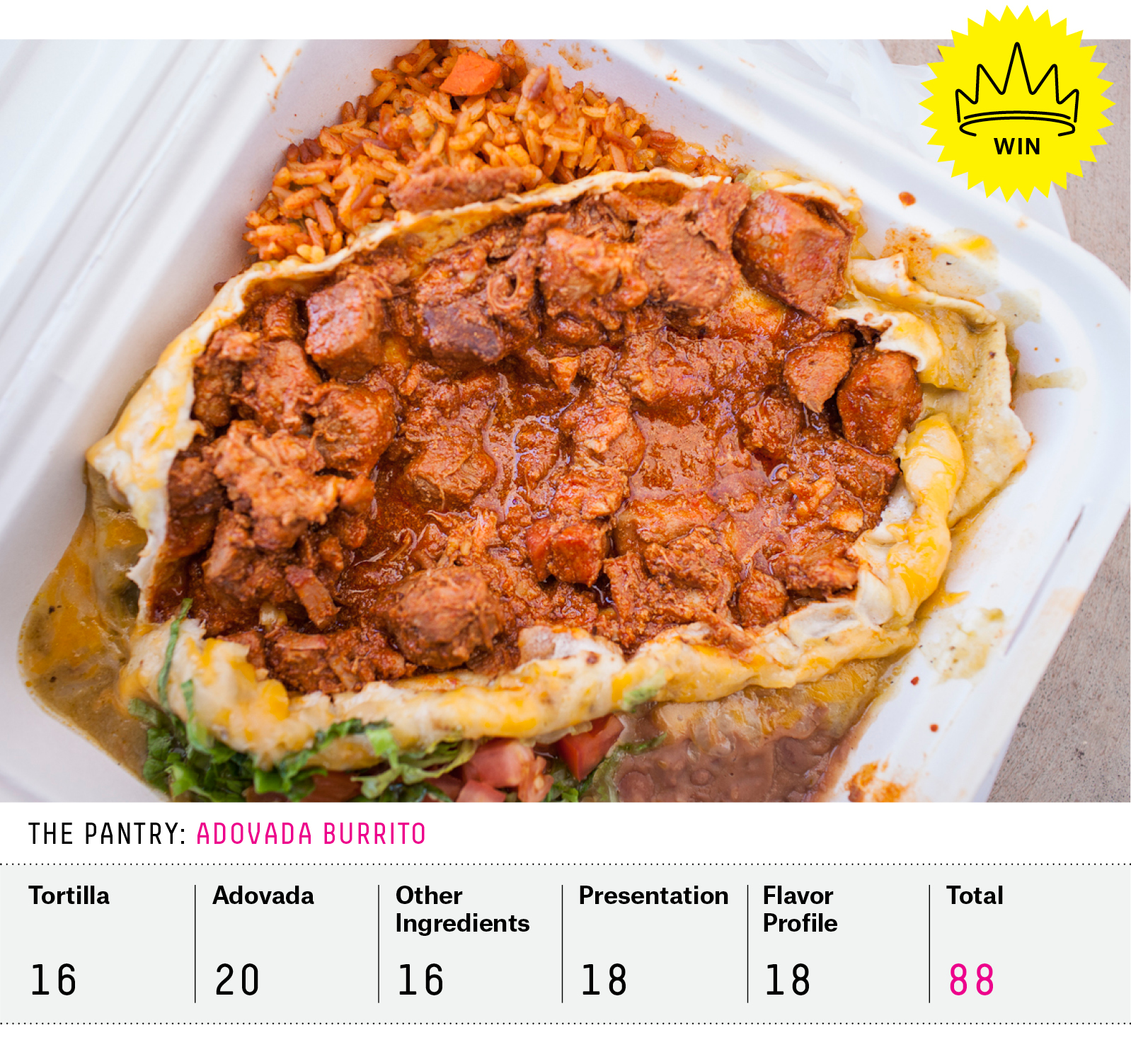 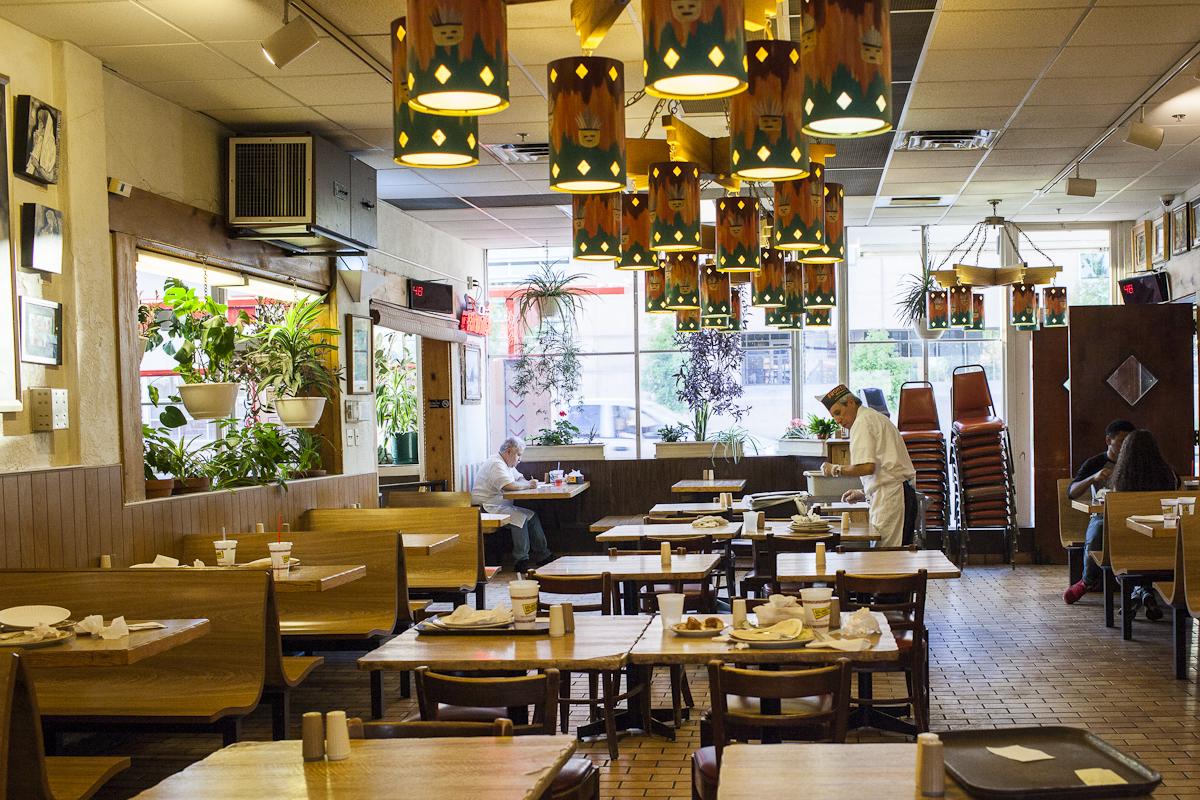 The first thing to know about the Frontier restaurant in Albuquerque, New Mexico, is that the carne adovada burrito is $2.15, and is available in a six-pack for $11.

Frontier is located on Central Avenue, historically the main east-west thoroughfare in Albuquerque. Before it was paved, Central was part of indigenous trading routes; more recently it made up a stretch of Historic Route 66 until that highway was decommissioned in 1985. The avenue runs along the University of New Mexico campus and has been touched by the city’s infamous violence in recent years. Frontier is located amid a confluence of college students, gang members, families, bikers, skateboarders … just about every part of Albuquerque society. These days, a private security guard, very visibly armed, wanders the restaurant and parking lot making uncomfortable eye contact with patrons. And still, it maintains the air of a family joint.

If you park in the lot behind the building (“45 minutes free parking, $5/hour after that,” though no one is there to collect), you’ll come in one of the back doors and make your way through two or three dining rooms before you reach the front. You order at the counter from a male cashier in a paper hat who will punch in your order using a giant flower attached to a pen. Your order will come with a number, and LED signs visible from every point in the restaurant will proclaim when your order is ready. I sat in the John Wayne room, where portraits of Duke look down from the walls. Setting suns, cacti and Native American arts fill the rest of the wood-paneled walls.

Frontier — which was seeded No. 1 in the West region by our Burrito Selection Committee — has a self-titled burrito, with beef, cheese, green chile, lettuce and tomato, but its signature dish is the carne adovada. In the front corner of the kitchen, alongside the register counter, a team of tortilla-makers churns out puffy, powdered white disks all night long. The carne adovada is stringy with a fire engine-red sauce that’s simple, but tasty with only a hint of vinegar or chile. You can choose to add salsa, but that’s the entire burrito, no frills, no other ingredients, just pure and simple.

Really, anything you order at Frontier is just an appetizer to the main course: Frontier sweet rolls. Slabs of stretchy dough, rolled into a spiral and slathered in sugary butter that melts into every crevice. 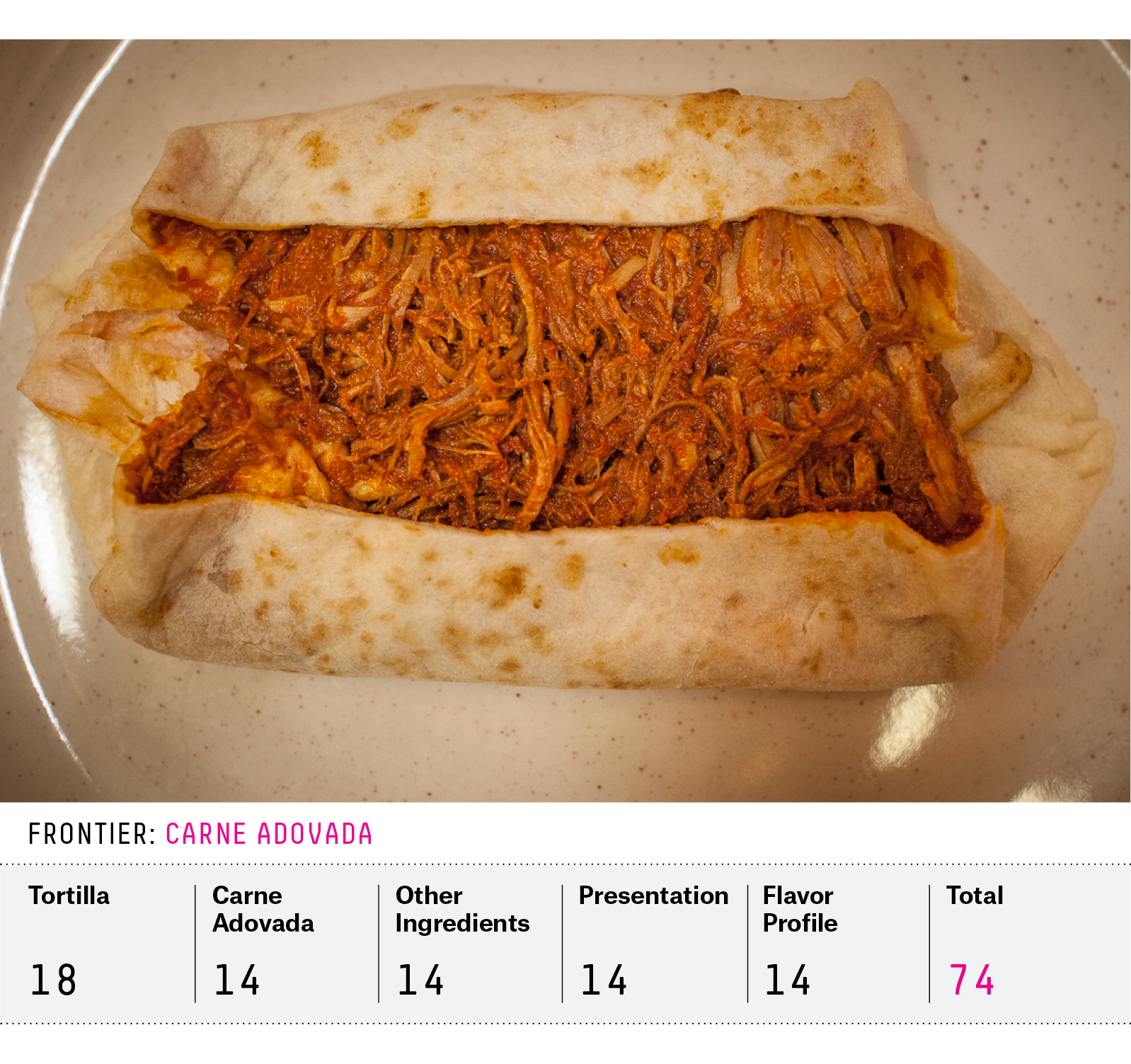 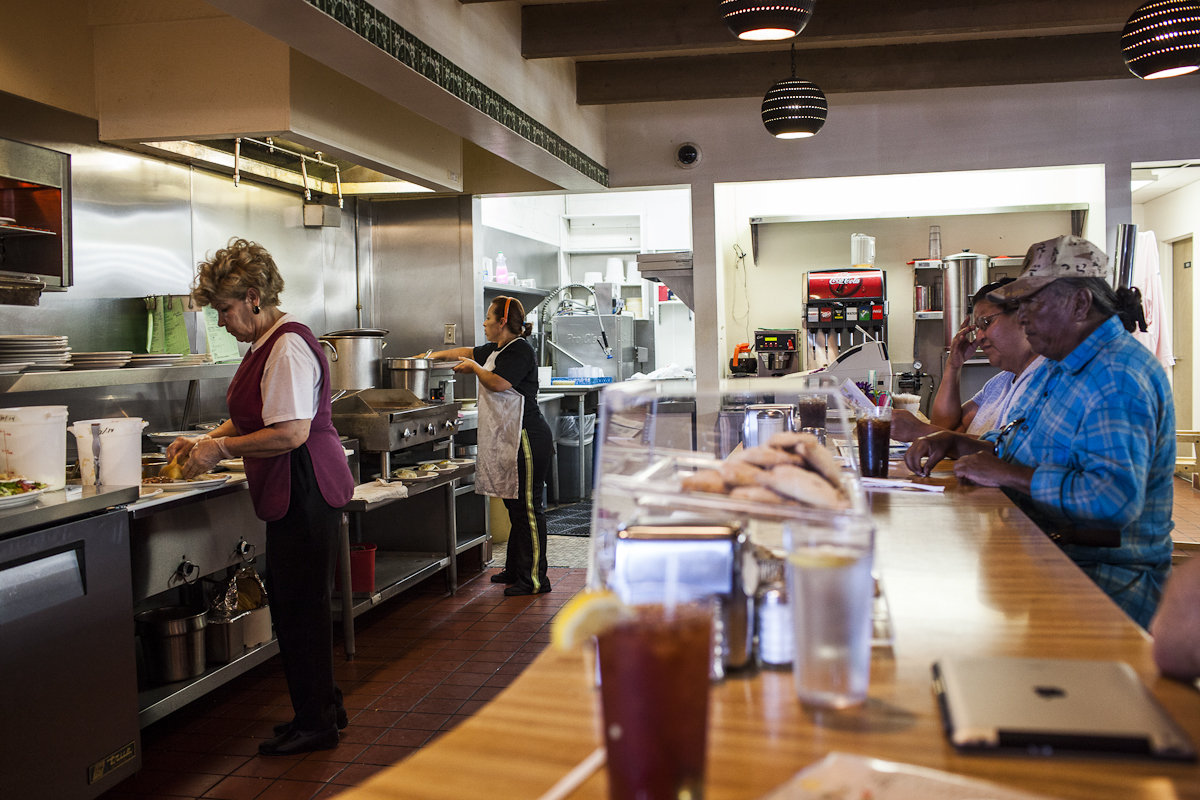 Back when the west was wild, drug stores and soda fountains were often one and the same, with pharmacists creating flavored drinks to mask the flavors of bitter drugs. The relationship blossomed, and in many towns, the pharmacy was also the place to find a cheap meal, especially for weary travelers.

In a way, Duran Central Pharmacy is just a nod back to those days. While you don’t have to knock twice on a hidden door, I couldn’t help but feel like I was in on a secret when I walked in. The pharmacy is standard in appearance, but the shelves are lined with an amazing collection of tchotchkes, household goods and medicines. To the left, in the back, is the opening to the restaurant, but the smell of tortillas and chiles respects no boundaries, and permeates the entire building.

As fate would have it, I visited Duran Central Pharmacy on a Saturday, one of the few days they make carne adovada. The restaurant was packed, so I took a seat at the counter, with a great view of the open kitchen’s action. I ordered a burrito, and answered the New Mexico question with “red” (red is Duran’s specialty). It’s a classic New Mexican red chile — sheer on the palate but deeply earthy and astringent in flavor. Red pepper, garlic and maybe a bit of yellow onion are boiled for hours, then pureed into a thin but flavor-packed sauce. It’s an odd and incongruous sensation the first time you try it: The flavor is as intense as if it came in a paste, and yet the sauce is often only slightly thicker than water.

The toothsome tortilla was fantastic, one of the rare breeds that can be thick and not at all gummy. The meat didn’t have the depth or richness of The Pantry’s, but the pinto beans were plump and flavorful, the meal paying homage to New Mexico’s official vegetables. The workers, each with a unique coif (a high ponytail, perfectly set poofy bangs, a golden bouffant), were all so busy that my burrito sat for a few minutes too long under the broiler and came out a little dry in spite of the pool of red sauce, which reached the edge of the lip of the plate. One wrong turn with the knife and I would have ended up with a very colorful lap. 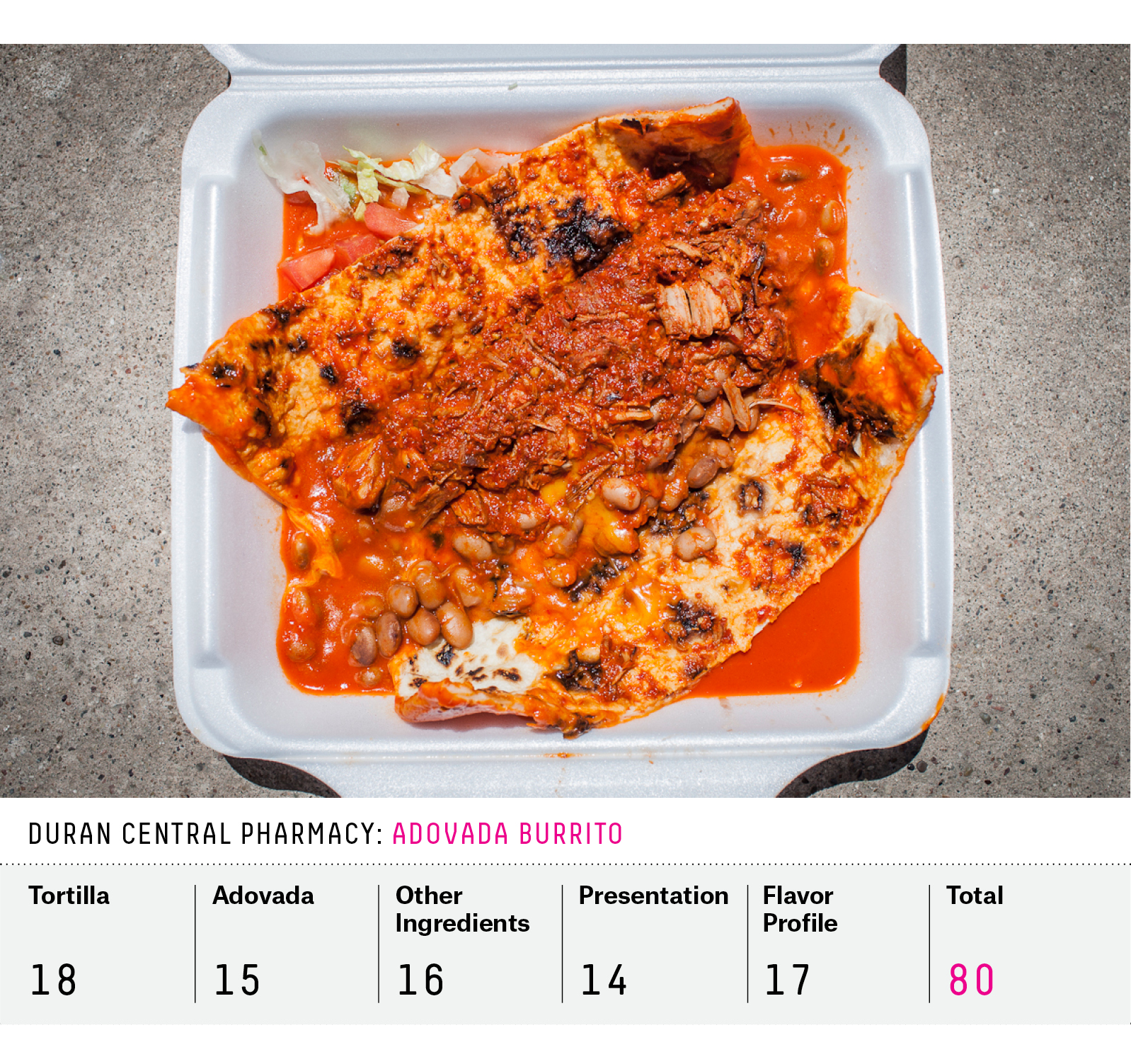 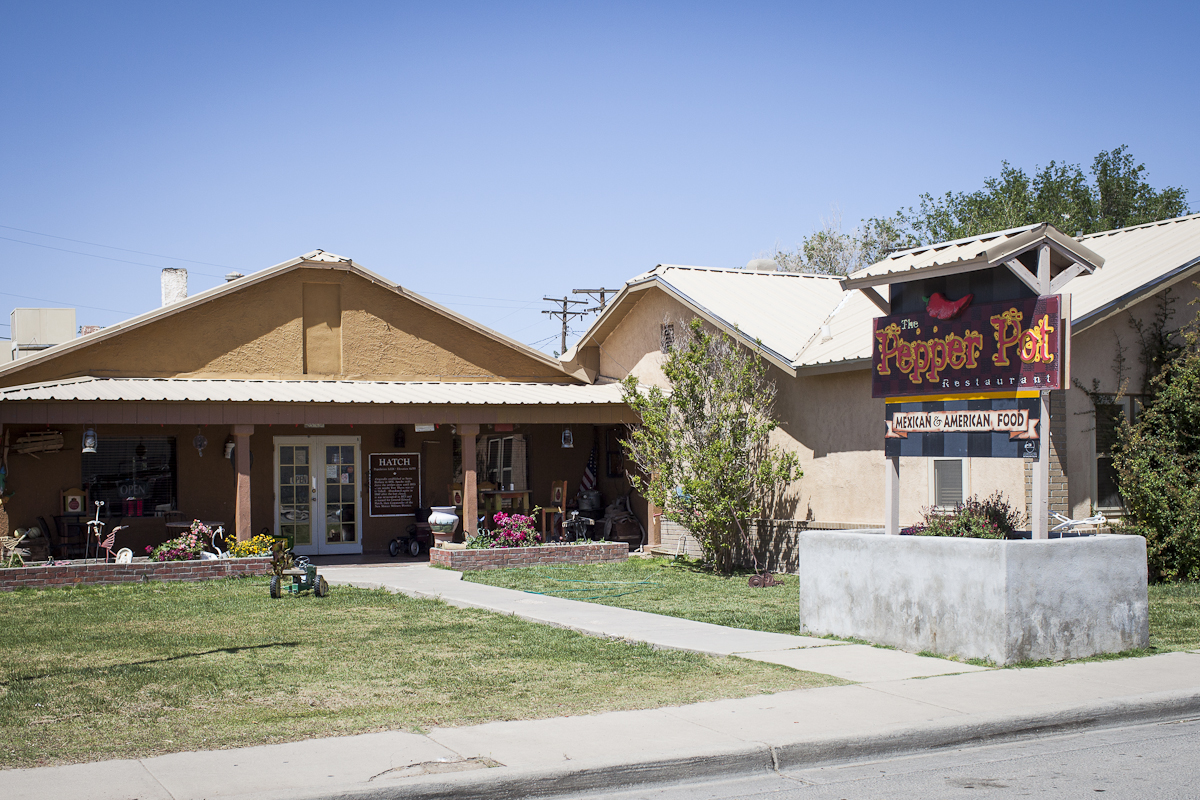 “No one comes to Hatch for Mexican food,” my uncle told me.2 As evidence, he walked me past the line around the corner at Sparky’s, a biker-approved restaurant on the corner of Hatch’s small thoroughfare, famous for green chile burgers. He wasn’t completely right, as Anthony Bourdain made a pilgrimage to Hatch to try green chile enchiladas, but judging by the line at Sparky’s, and the silence inside the Pepper Pot, he wasn’t all wrong either.

Hatch is the self-declared “Chile Capital of the World.” It’s a village of approximately 1,600 people, a few banks, a grocery store and roadside chile stands. The Pepper Pot is set in an old adobe house. We sat in the front room by ourselves, an enormous American flag hanging on the wall, a chile pepper cloth on the table and a fan clicking overhead. When my order came out, it was just a chile relleno. The waitress offered to bring me a tortilla; “it’s the same thing otherwise,” she said. We all giggled a bit, and she offered to bring it back out, this time wrapped up. I readily accepted her offer.

The chile relleno was filled with thick globs of melty white cheese that liquified on the tongue. Battered and fried, the chile was fleshy and moist, yielding to the knife and fork with ease. It was then stuffed inside a tortilla and doused in creamy green chile enchilada sauce, made from cream of chicken soup, chopped green chile, garlic and onion.

I’m not sure what the tortilla adds to this dish, other than presenting a protective barrier between the enchilada sauce and chile relleno that prevents the latter from disintegrating amid the liquid. Next time I’ll order my chile relleno straight up. 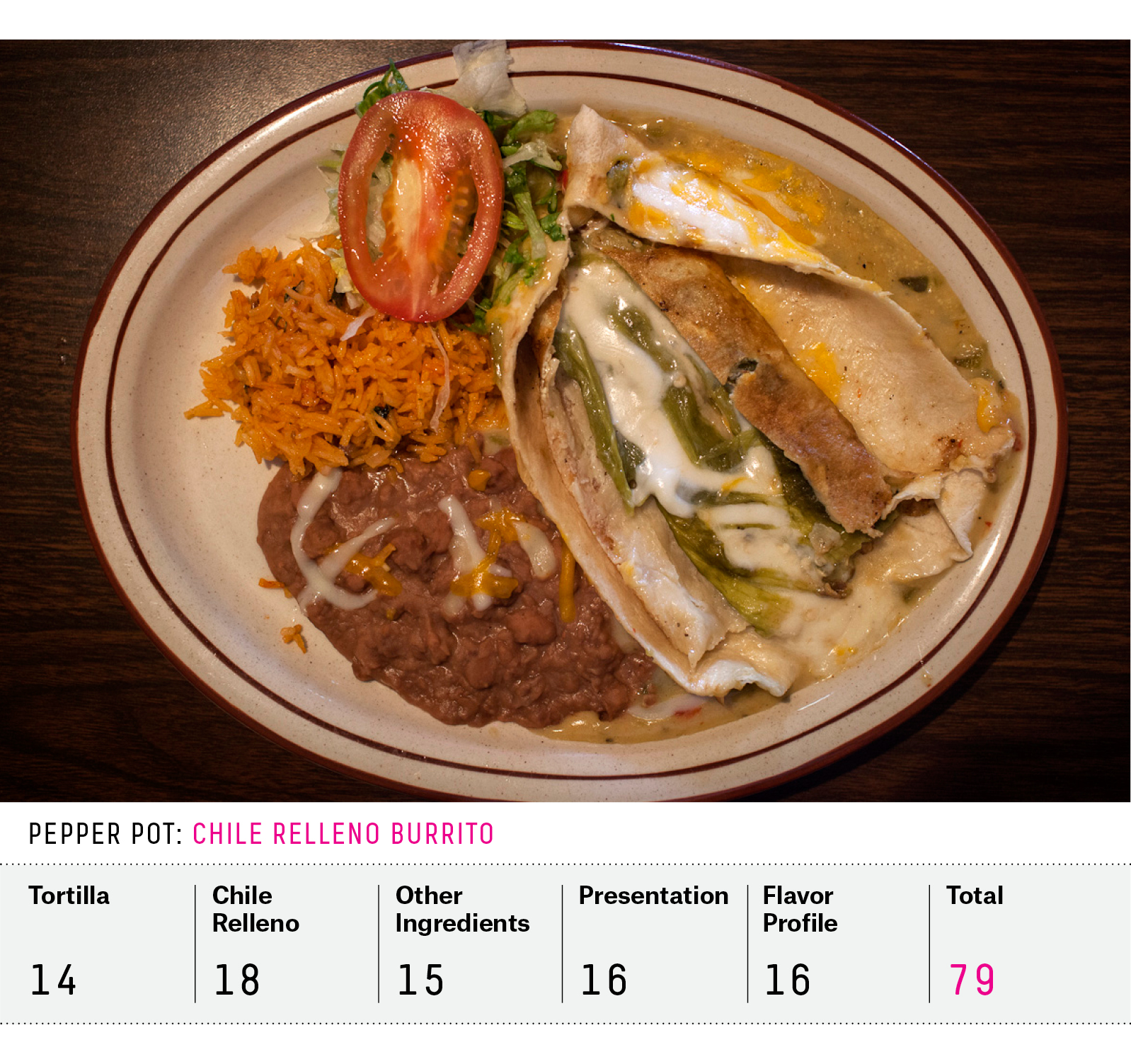 I’ll always remember those sweet rolls at Frontier, but this isn’t a sweet roll contest. The winner is … The Pantry!