Five years ago, educators at Elkhart Community Schools realized they had a problem. Their dropout rate was too high. More than one third of the northern Indiana school district’s students weren’t graduating from high school on schedule. Among Hispanics, who make up about a third of the student body, the figures were even worse.

“It was a significant moment where we said we have to change the culture,” said Gail Draper, who heads the guidance department at Elkhart Central High School. “We had to do something to turn the tide.”

It seems to be working. In 2013, 85 percent of Elkhart’s students graduated on time, putting the district close to the state average. Perhaps even more remarkably, the graduation rate among Hispanics is now equal to — or even slightly above — that of the district’s overall population. 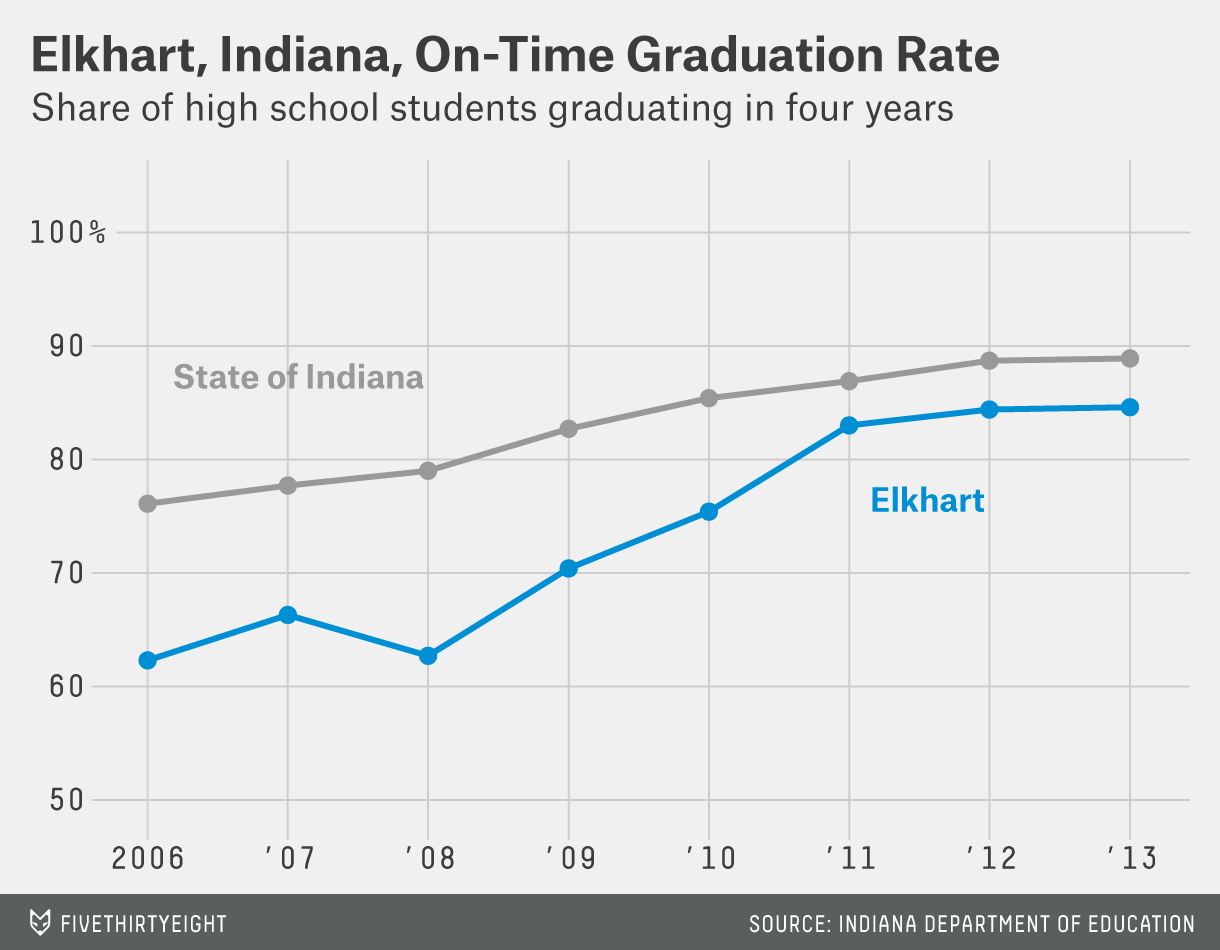 Elkhart’s improvement is a particularly dramatic example of a nation-wide trend: Graduation rates are improving, especially for Latinos.1 Nationally, the on-time graduation rate topped 80 percent for the first time in 2012, up from 74 percent five years earlier. For Latinos, the graduation rate is up more than 10 percentage points over the past five years, to 76 percent.

The decline in the dropout rate — which looks at whether students earn a diploma at all, not just at whether they do so within four years — has been even more dramatic. In 2000, 12 percent of Americans ages 18 to 24 hadn’t graduated high school, according to a Pew Research Center analysis of Current Population Survey data. By last year, that figure had fallen to 7 percent. Among Hispanics, the dropout rate has fallen from 32 percent to 14 percent over the same period. Blacks and whites have experienced smaller but still significant gains. 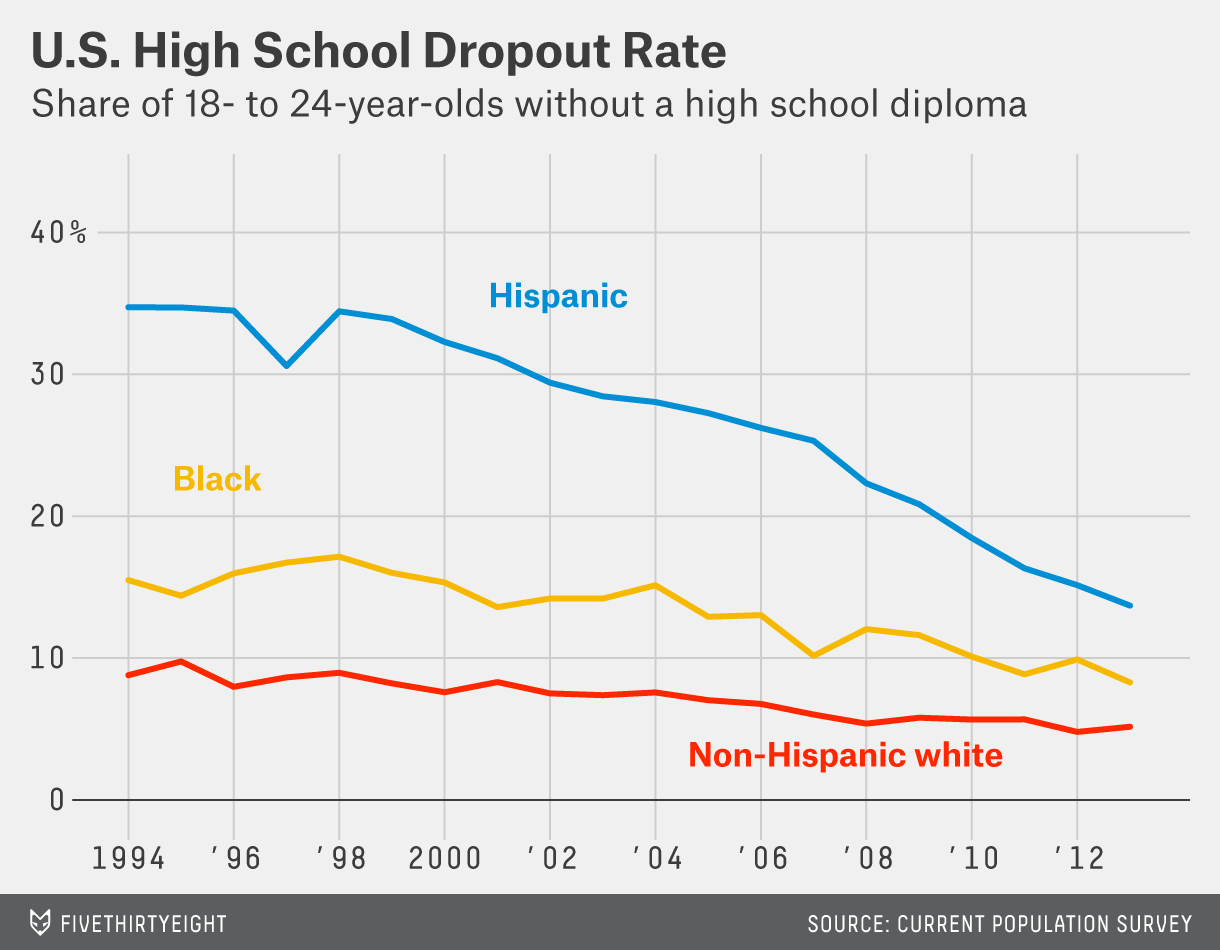 The falling dropout rate among Latinos is partly due to shifting demographics, especially the rising share of the U.S. Hispanic population that is native-born. The Census figures that Pew used count everyone between ages 18 and 24 without a high school diploma as a “dropout,” regardless of how long they’ve been in the U.S. A high school dropout who immigrates from Mexico at age 20 will show up in the Census figures, even though he never attended school in the U.S. Immigrants are less likely to have completed high school than the native-born population, so as more Latinos are born in the U.S., the Hispanic dropout rate will tend to fall.

But demographics alone can’t explain the shift. The dropout rate has also fallen sharply for native-born Hispanics, and for immigrants who have been in the country long enough to go to school here.2 Moreover, the same basic trend shows up in Education Department data that includes only people who have actually attended school in the U.S.3 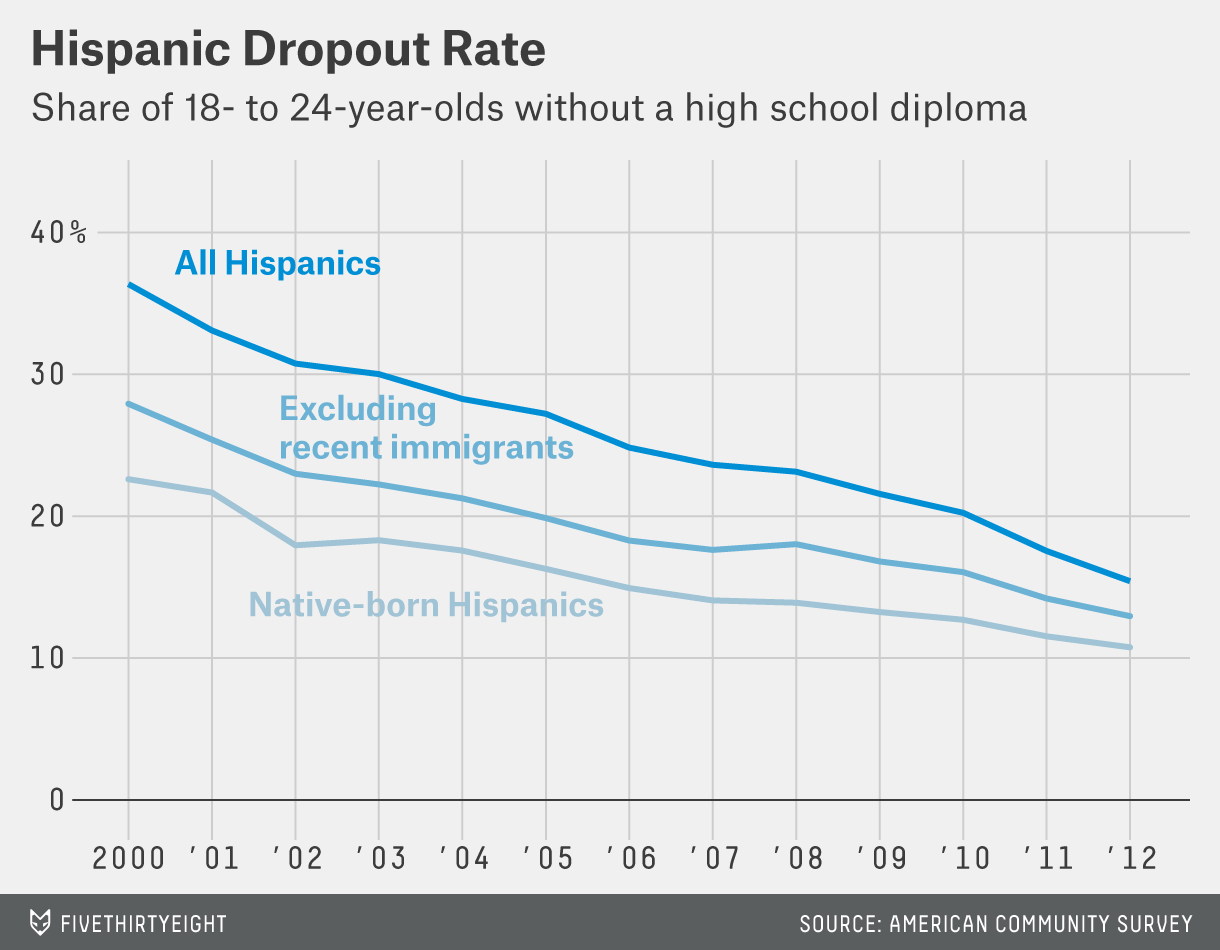 The weak economy, too, could be part of the explanation. People are more likely to drop out of school when jobs are available to them. The housing bust wiped out millions of jobs in the construction and manufacturing sectors, both major sources of employment for less educated Americans. But while the decline in the dropout rate has accelerated since 2008, at least for Hispanics, it long predates the recession.

In other words, the declining dropout rate reflects a genuine improvement in Latinos’ educational success, not a statistical quirk.

“It’s pretty clear in the data that this isn’t just about changing demographics and the weak job market,” said Richard Fry, who wrote the Pew report.

Fry said he isn’t sure what is behind the shift. He noted that the 2001 No Child Left Behind law holds districts accountable for graduation rates, both for the overall population and for specific groups such as racial minorities and low-income students. And he said Latino education advocates and non-profit groups have focused on the issue in recent years.

David Murphey, a researcher at Child Trends, a Maryland nonprofit that recently released a report on Hispanic youth, pointed to another likely reason for Latinos’ outsize gains: They had more room for improvement. Even now, the Hispanic dropout rate is double that of the population as a whole, and nearly triple that of non-Hispanic whites. Hispanics, Murphey added, are simply responding to the same economic incentives that have been driving down the dropout rate for the population as a whole.

“We started to see dropout rates in general fall and I think Hispanics were part of that,” Murphey said. “It’s clear that in the U.S., you’ve got to have a high school degree or even more if you want to get ahead.”

Sometimes, though, it takes more than economic incentives to keep students in school. That’s especially true in a place like Elkhart, where the unemployment rate was 5 percent in August and manufacturing jobs are readily available for those who want them.

“It’s hard to get an 18-year-old to think in the long term when they can get a job for $12 an hour,” said Draper, the Elkhart guidance counselor.

So Elkhart administrators began calling local employers and talking to them about how by offering jobs to teenagers during school hours, they were contributing to the dropout problem — ultimately leaving them with a less educated workforce. In some cases, the administrators worked with employers to turn the jobs into internships, earning students school credit. And they developed an after-hours school program to help students who needed to work during the day stay in school.

“We try and work with the students in the circumstances that they’re in,” Draper said.

Draper recalled one student who had arrived in Elkhart from Mexico in his sophomore year speaking no English. He was a particularly promising student — until one day he walked into the guidance office and announced he was dropping out. His mother had lost her job. He needed to go to work.

“We said no, you can’t do that. You’re too smart,” Draper said. The school raced to find help for the student and his family, reaching out to local community groups to find financial support and working with the student to ensure he could stay in school while working. Draper said the experience showed the importance of relationships — the student’s relationship with his advisor, where he felt comfortable revealing his family’s problems, and the school’s relationship with the community, where they could find a solution.

It worked. The student stayed in school and is on track to graduate with his class this spring — with honors.

Administrators took other steps to reach out to students at risk of dropping out. They began scheduling summer meetings with parents of students who weren’t on track to graduate. They hired a social worker to chase down truant students and work with them to return to school. They restructured the advisory program so students have one advisor through all four years of high school.

But the real key, administrators realized, is intervening before students ever get close to dropping out. Elkhart Central Principal Frank Serge says they looked at the data and realized that freshman year is especially key: Students who earn at least 10 credits in their first year of high school are 50 percent more likely to graduate. So Elkhart reorganized its freshman class into “academies,” in which students stay together throughout the day, giving teachers a chance to compare notes on students and catch problems early.

The efforts start even at the elementary school level. At Monger Elementary School, more than half the roughly 350 students are Hispanic, and 90 percent are eligible for free or reduced-price lunches (a measure of poverty). It posted the best test scores of any of the district’s dozen elementary schools last year.

April Walker, the school’s principal and self-described “data-junkie,” attributes the school’s success in part to a near-obsessive focus on tracking students’ progress. She creates color-coded spreadsheets showing students’ scores and whether they’re making progress. Then she works with teachers to turn those insights into plans, identifying students who need help with specific skills, and then carving out time in the school day to give it to them.

Even the students get into the data game. Older students are asked to set goals and then chart their progress. Kindergartners get to put their names into bubble gum machines labeled, “I can count to 25” and “I can count to 50”—and then watch the machines fill up as their classmates reach their goals.

“Everything we do here is based on data,” Walker said.

Even with all that data, there’s no way to know exactly what is working in Elkhart. The district changed far too many variables at once to isolate the one that made the biggest difference. But to the educators, that doesn’t matter — the important thing is that students are staying in school.