Hillary Clinton and Donald Trump are the two most disliked presidential nominees in modern American history. That was true at the beginning of this campaign, and, as we sprint toward Election Day, it’s still true now. But equating Clinton’s and Trump’s popularity problems misses a meaningful part of the story. Sure, they both have terrible favorability ratings compared to past presidential candidates, but Clinton has consistently been more popular than Trump, and we’re now at the point in the campaign when that difference suggests Clinton has a clear advantage.

Here’s a 10-poll rolling average of each candidate’s net favorability rating — the percentage of voters who have a favorable opinion of them minus the share who have an unfavorable opinion — since June, when Clinton became the presumptive Democratic nominee. 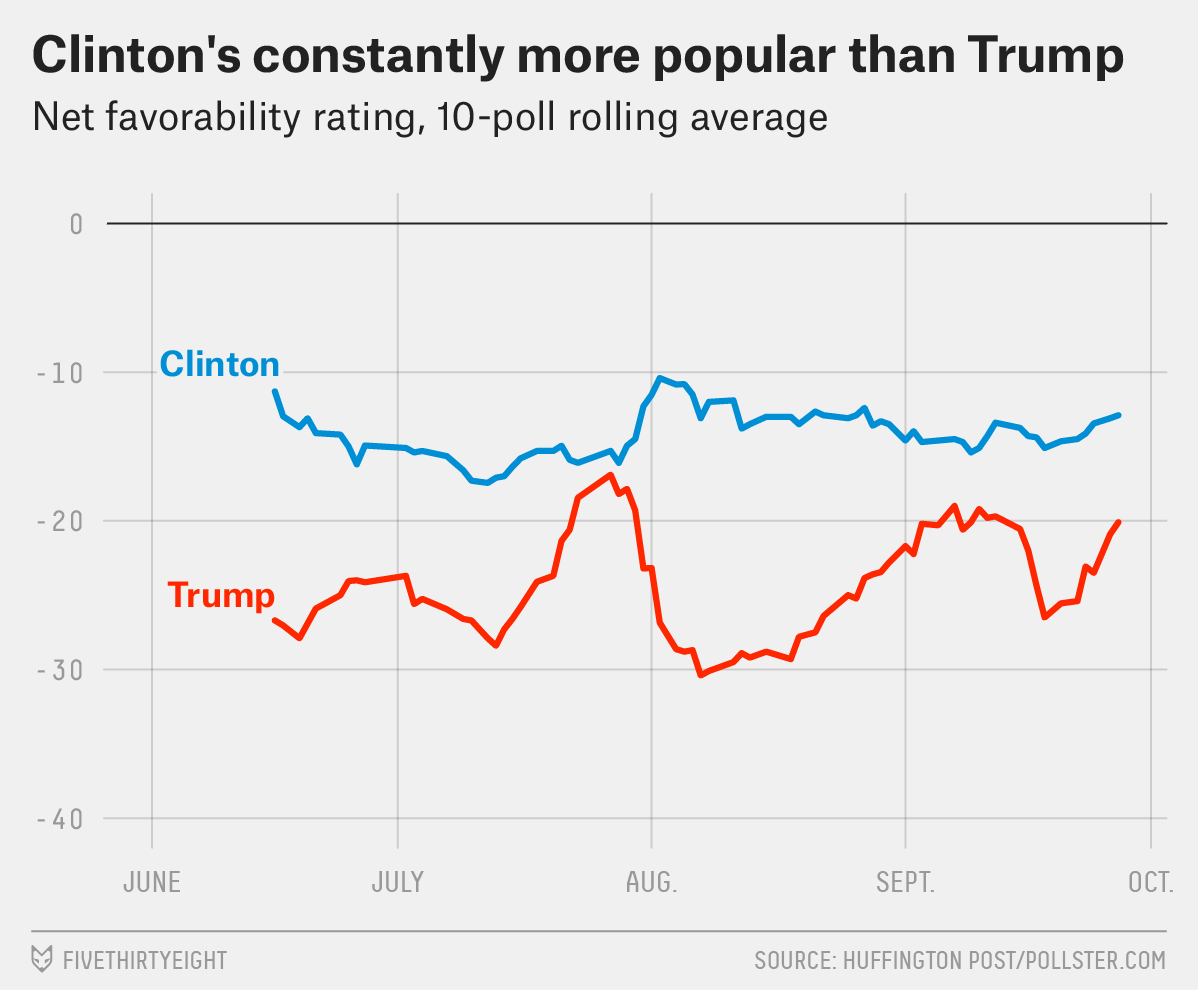 The trend in Trump’s and Clinton’s net favorability ratings tracks with the horse-race polls and the overall trajectory of the race. Trump’s likability improved right around the time of the Republican National Convention in mid-July, closing in on Clinton’s. Clinton’s edge in favorability expanded after the Democratic National Convention. And things slowly tightened after that.1 Yet, unlike the horse race, Trump has never truly moved to within striking distance of Clinton’s net favorability rating except for that brief moment after the GOP convention.

Why has Clinton maintained a greater edge in net favorability than the horse-race numbers? The gap might suggest she has more latent support that she isn’t currently capturing but could on Election Day. There’s also evidence of that upside when you compare two-way surveys (just Clinton vs. Trump) to four-way polls (which include Gary Johnson and Jill Stein). Clinton does better when Johnson and Stein voters are forced to choose between the two major party candidates.

A few things stick out. First, as I said at the outset, Clinton and Trump remain very much disliked relative to previous candidates. Jimmy Carter in 1980 was the only candidate before 2016 who had a net favorability of -10 percentage points or worse. Now, both Clinton and Trump fall into that category, and Trump’s is below -20 points.

Second, the difference in popularity between the candidates right now is fairly predictive of the November result. You can see this more clearly in the chart below, plotting the average difference in net favorability ratings of the Democratic and Republican presidential nominees in the final two weeks of the September before the election and the final result.

Indeed, if you were going to project the 2016 election using a simple linear regression based on the difference between candidates’ net favorability ratings, you’d have Clinton winning by a little over 4 percentage points. That’s slightly larger than the 3.1-point margin the FiveThirtyEight polls-only model currently forecasts. Again that suggests that Clinton may have some upside potential our model may not be showing.

Of course, it could also be that the unusually large share of voters who don’t like either candidate makes these numbers less meaningful than usual. And even if the 2016 campaign isn’t operating on a different set of rules, net favorability at this point in the campaign is not a perfect predictor of the final result. Bill Clinton, for example, beat George H.W. Bush in 1992, but by a smaller margin than their net favorability rating difference implied. Further, as my colleague Nate Silver pointed out four years ago, we can’t be sure why favorability ratings correlate with the election results — the relationship might be the result of confounding variables. It could be, for example, that some set of other factors, such as underlying economic conditions, determines both how voters view the candidates and which one they cast a ballot for. If that’s the case, then net favorability may not tell us anything the horse-race polls aren’t already.

My guess, however, is that Clinton’s being better liked than Trump matters. Clinton has been better liked throughout this campaign, and elections are ultimately choices. Right now, the polls reflect that, and it’s why Clinton is ahead of Trump even if voters aren’t thrilled with their choices.

The FiveThirtyEight Elections podcast covers the twists and turns of the election each week. Subscribe on iTunes or listen online.