Not long ago, I joined a subculture of fitness freaks trying to separate from the sedentary masses. Using a wristwatch-like tracker, I logged every step I took on my way to 10,000. That’s the number many health-advocacy groups have held out as the ideal minimum for a healthy day of activity. When I hit 10,000 steps my device would vibrate, a pat on the wrist signifying that I had reached my goal.

But not all steps are created equal — or are even steps.

There are many good reasons to doubt the new generation of pedometers, even as they grow in popularity (as recent articles in Slate, Quartz and The New York Times have pointed out). These devices value footsteps over other kinds of movement, sometimes count steps when you haven’t taken any, and emphasize that one-size-fits-all target of 10,000 steps — which is hardly the stuff of rigorous science.

But consider the alternatives for tracking fitness and health. Counting calories isn’t easy. And it seems like quibbling to complain that these devices aren’t registering steps when users are doing something healthy like swimming or riding a bike — especially when most people fall far short of 10,000 daily steps anyway. Besides, it’s not obvious which kind of exercise is best for you; scientists say those estimates carry loads of uncertainty and don’t apply equally to every person.

Before making up my mind, I decided to collect some data. Wearing my Fitbit Force (which has since been recalled for causing rashes in some users1) I headed to my local park with my bike and a laptop in tow. I counted reps — steps, pedals, etc. — then checked how many steps the Force recorded. It accurately counted ordinary steps, even when my Fitbit arm was tucked into my jacket pocket. But when I channeled my inner cat burglar and tiptoed, the Fitbit step count didn’t budge. The same happened when I pedaled the bike lightly. Fifty faster pedals counted for 20 steps, meaning a fast pedal was only good for 0.4 steps. Every two fist pumps or claps, though, netted a little over a step; each wave of my arm was worth a step; and each two-handed tennis backhand swing, taken while standing still, counted for a little over a step. 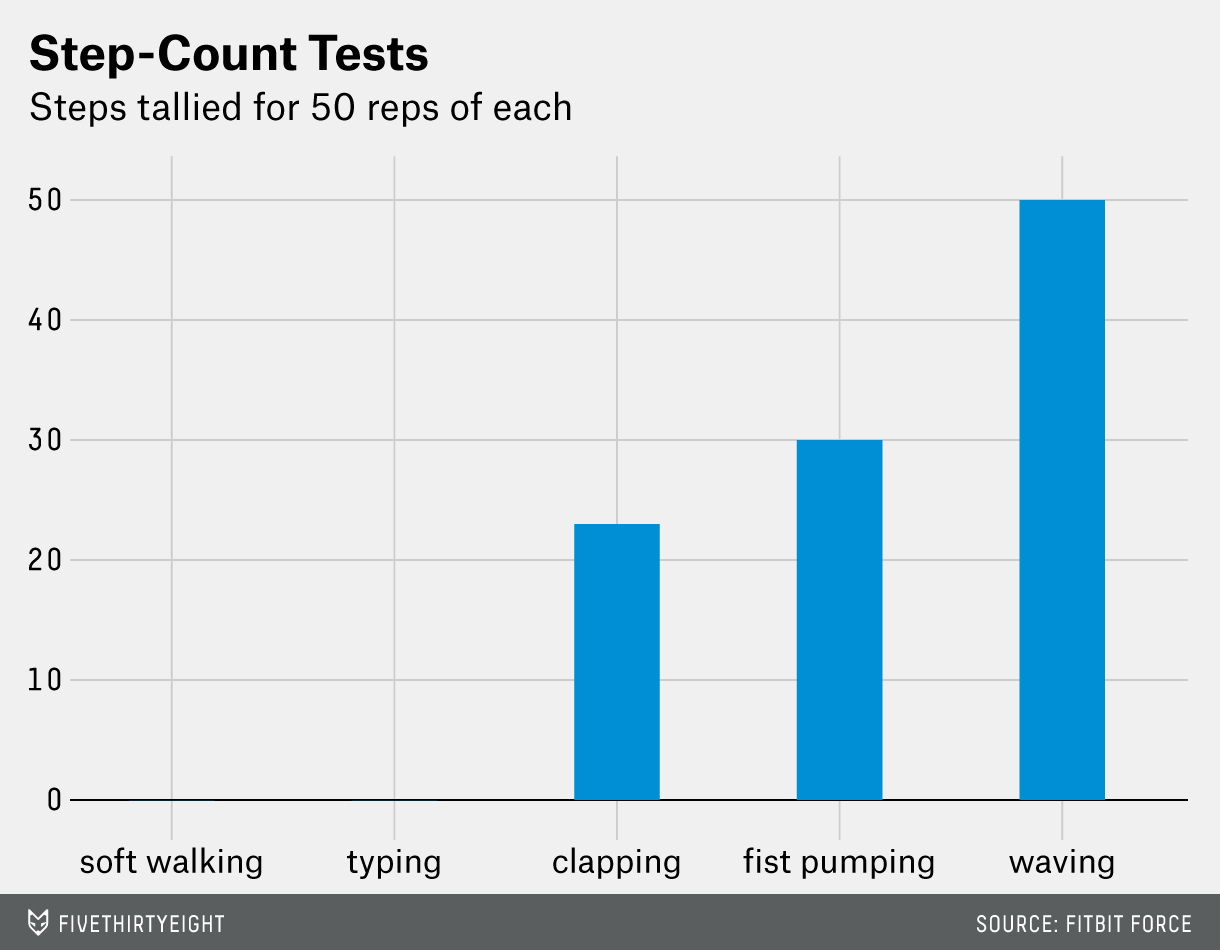 Biking and arm motions — as well as swimming and skiing, two other activities some Fitbit users report register as steps — do carry fitness benefits, but they don’t count much for steps. Of greater concern from a personal-health perspective: The easiest way to amass steps — walking at a brisk pace — is far from the most efficient way to burn calories. Exercise scientists say many sports burn calories faster and can also build muscles.

My typical count of 526 steps per five minutes when walking was more than double my average of 250 when playing singles tennis, over several tests wearing the Fitbit. And it’s possible my true step count in tennis was lower, because other motions might have juiced the numbers. I had similar results with squash, badminton and Ultimate Frisbee — each ranked well below walking in step-count rate, yet each activity is supposed to burn more calories per minute, according to the Compendium of Physical Activities, a compilation of findings on average calorie burn rate for hundreds of activities. My highest step-count rate came while jogging to catch a train — to reach an Ultimate Frisbee tournament. 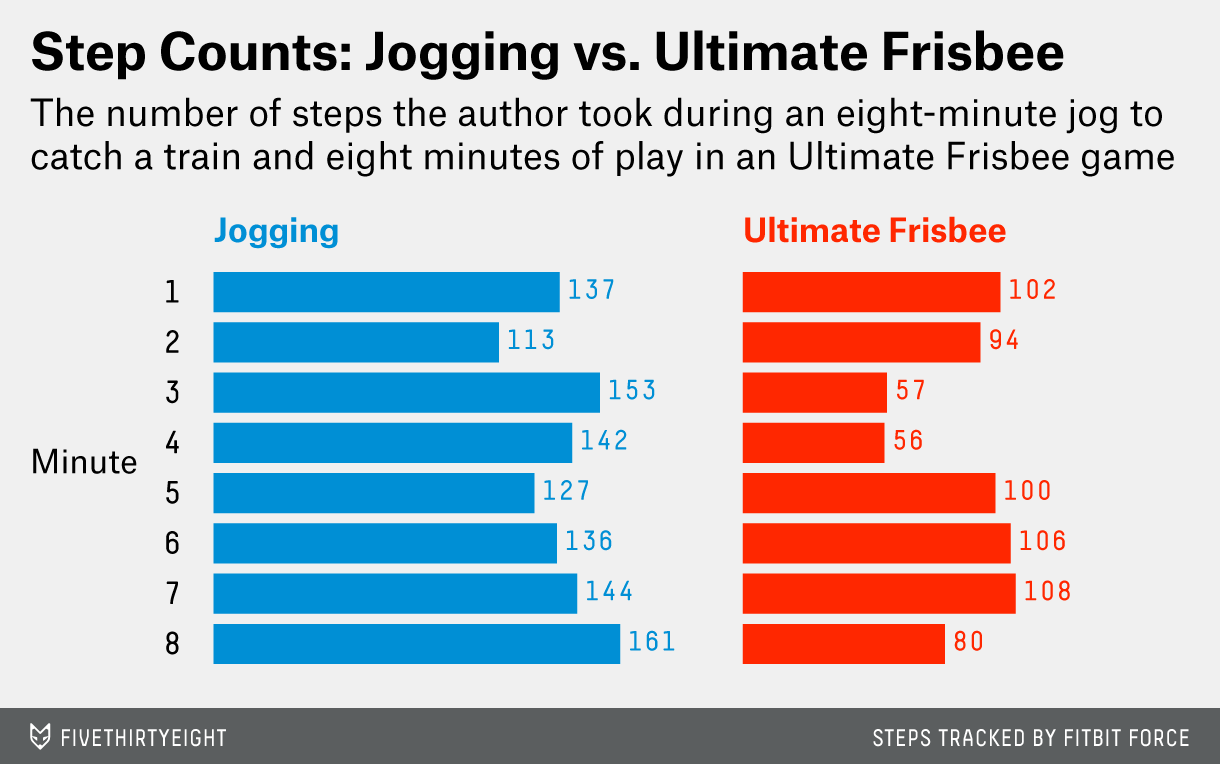 The compendium itself is a fascinating scientific project, built up from thousands of little experiments like mine over the past few decades. For the latest edition, in 2011, researchers compiled data on hundreds of activities, some from studies using pedometers and accelerometers, some using older or more complex technology.

Every activity is converted into a ratio: how many calories were burned each minute divided by the calorie burn rate while resting. For the latest report on the compendium, exercise scientist Stephen Herrmann and his colleagues compiled estimates for more than 800 activities, ranging from intense or extreme sports such as boxing (12.8-to-one ratio of calorie burn rate to resting metabolic rate) and marathoning (13.3) to lighter pursuits such as book-binding (2.3) and having your nails done (1.3).

“It’s not just one step is one step is one step,” Herrmann, of Augustana College in Sioux Falls, South Dakota, told me. That’s worth remembering for those who might be inclined to boost their step counts by substituting walking for more energy-intensive exercises.

My experiment had a sample size of one. The compendium is based on some studies with just one or two dozen subjects — or, in some cases, none, relying on the expert judgment of a scientist. (“Plenty of them are made up,” Herrmann said.) The underlying studies vary in critical ways: which sorts of people participated; whether resting time was counted (a tennis changeover, for example); and whether the device used to record calories might have interfered with the activity itself, as a mask might in a game of basketball.

However, the findings are consistent on one point: People show wide differences in calorie burn rates, even when playing the same sport.

Or, for that matter, when in bed. Researchers at the University of Quebec in Montreal and the University of Montreal last year studied heterosexual sex and found a range for total calories expended of over 20-fold for men, from 13 to 306 calories; and over 10-fold for women, from 12 to 164. Some people, apparently, just try harder — or last longer.

Calorie burn rate is a better measure of fitness than tracking steps, but it’s often impossible to calculate properly. Herrmann and his colleagues have developed a rough conversion chart to translate calorie burn rates from their compendium for different body types.

My tennis steps may have burned more calories than my walking steps, but my low tennis step count could also reflect my own lethargy, or long changeovers, or an awkward playing style, more than any failing in the step-count method. And there are myriad reasons to endorse the 10,000-step goal, including the unfortunate finding that most Americans don’t reach it, according to Centers for Disease Control and Prevention studies. We have to learn to walk before we can run … or play tennis, or throw punches in the ring.

Judging a fitness goal by steps “simplifies it too much,” Herrmann said. However, “as a quick and easy thing, step count does a really nice job.” And alternative measures can be much more complicated. Fitbit estimates calories burned, but most of those estimates come from basic metabolism and there isn’t a single, universal target.

When we measure something, we often make it a priority. Prioritizing steps probably isn’t as good as focusing on calorie burning or muscle building, and targeting a particular number can have its downsides. But relative to targeting examples from totally different realms, like teaching to the test in education or massaging crime data, step counting is fairly benign.

“The question is, are you making one healthy choice instead of another healthy choice?” said Lindsay Cook, senior marketing manager for Fitbit. If the answer is yes, she said, then no real harm done. “What is so great about steps is that they are so understandable, and they track so many different kinds of things,” she added.

Counting steps for activities that don’t involve steps isn’t a bad thing, even if it’s not technically correct; it rewards users for other activities, such as riding a bike or using an elliptical machine. “They want to get credit for every activity that they do,” said Shelten Yuen, a Fitbit engineer. “A lot of our users actually want that credit.”

Cook said questionnaires have shown Fitbit users take 43 percent more steps than they did before they began using the devices. Some users get motivated by the numbers on their arms and smartphones, and by feedback from peers, positive and negative. (Fitbit offers people the opportunity to “taunt” friends wearing their devices who fall short of their own totals.)

Mark Leavitt, a retired physician, engineer and doctor who is active in the growing quantified self movement, said a focus on steps doesn’t give credit for building muscle — he gets no steps for weightlifting, for example. Yet he hasn’t found, or built, a better alternative to his tracker. “When you quantify, you make yourself accountable. When you’re just doing it qualitatively, it’s so easy to fudge the story. The data don’t lie.”

For data junkies like Leavitt, personal fitness information is fun. If anything, they want more data. Fitbit makes daily data downloadable for an additional paid subscription, but users must write code to get their minute-by-minute results. Kenneth Young, a 43-year-old Bay Area civil engineer, said he’d like to use his device to track his movement during tennis matches, but is stymied by the data limitations. “That’s just the problem with Fitbit,” he said

I haven’t found myself playing low-step sports any less in the three months since I started using my Fitbit; I’ve always played them more for pleasure than for fitness. And I did find myself running experiments in the park instead of sitting on my couch, which is where I would have been without the impetus of this assignment. I felt a pang of anger when my device denied me credit for my deliberately low-impact steps, and guilty pleasure when clapping boosted my count. And I did exercise I wouldn’t have done otherwise: 169 steps every five minutes.

I’ve become a skeptical convert to step-counters. Though they produce imperfect data, some information is better than none at all. And if they give me credit for taking steps when I’m actually sitting down but, say, clapping or pumping my fists? Well, sitting and clapping is better than just sitting.