Tornado season has started quietly this year, continuing a trend that began in 2012. Through March 31, the United States had only 70 reported tornadoes even though the first quarter has averaged more than 170 a year over the last 10 years. April has remained quiet, with 36 preliminary tornado reports as of Sunday. Oklahoma hasn’t seen an intense tornado1 since May 31, the longest such stretch on record. The small tornado seen there on Sunday was the first of any kind since Aug. 7.

Many people have written about the possible causes, from drought to persistent cooler weather in places that typically see increasing tornadoes in spring. But what does this quiet start mean for the rest of the tornado season? Will our mostly good fortune continue?

Much will be revealed in the way the large-scale weather pattern unfolds in the coming weeks. But history provides a useful lesson: A quiet start to severe weather season does not necessarily mean a quiet finish.

Tornado statistics are available back to 1950, but they are difficult to assess. If one simply looks at the raw number of reported tornadoes, it appears we’ve seen a huge increase. From 1950 to 1989, only two seasons saw more than 1,000 tornadoes. Since 1990, only three seasons have had fewer than 1,000. 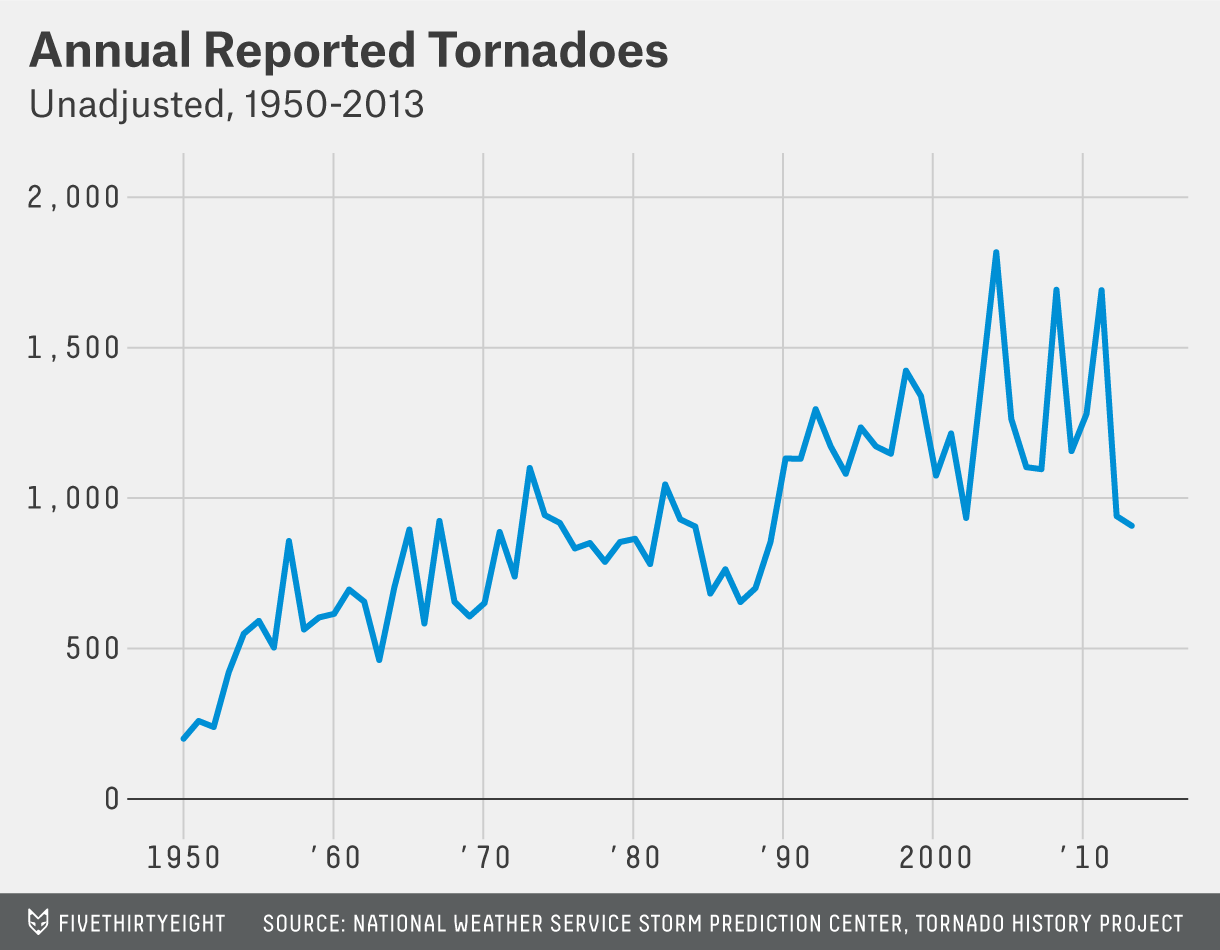 Why is this? Storm reporting has improved since 1950. Storm chasing began in 1956 but was mostly a niche concept until the early 1970s. It grew slowly but steadily into the mid-1990s. Since the movie “Twister” was released in 1996, the practice has proliferated. Storm chasing has helped improve the historical record of tornadoes and better our understanding of how they behave, birthing efforts such as 2010’s VORTEX2 project.

The National Weather Service’s current network of Doppler Radars, which came online between 1992 and 1997, has also improved the detection and analysis of tornadoes. Today, with growth in population, storm chasing, Doppler radar, social media, YouTube and a 24-hour news cycle, hardly any tornado goes undetected or unnoticed.

Now that we understand how much tornado records have improved over the last 60 years or so, let’s see how the current tornado “drought” compares to the past. As a share of the 10-year trailing average since 1959, only two years have seen a slower start to tornado season. The first quarter of 1969 had just 23 percent of the normal tornado activity, and January-March 2002 saw just under 38 percent of normal. This year, we had just over 39 percent of the normal tornado activity through the end of March, continuing a trend from last year, when we had about 75 percent of normal. 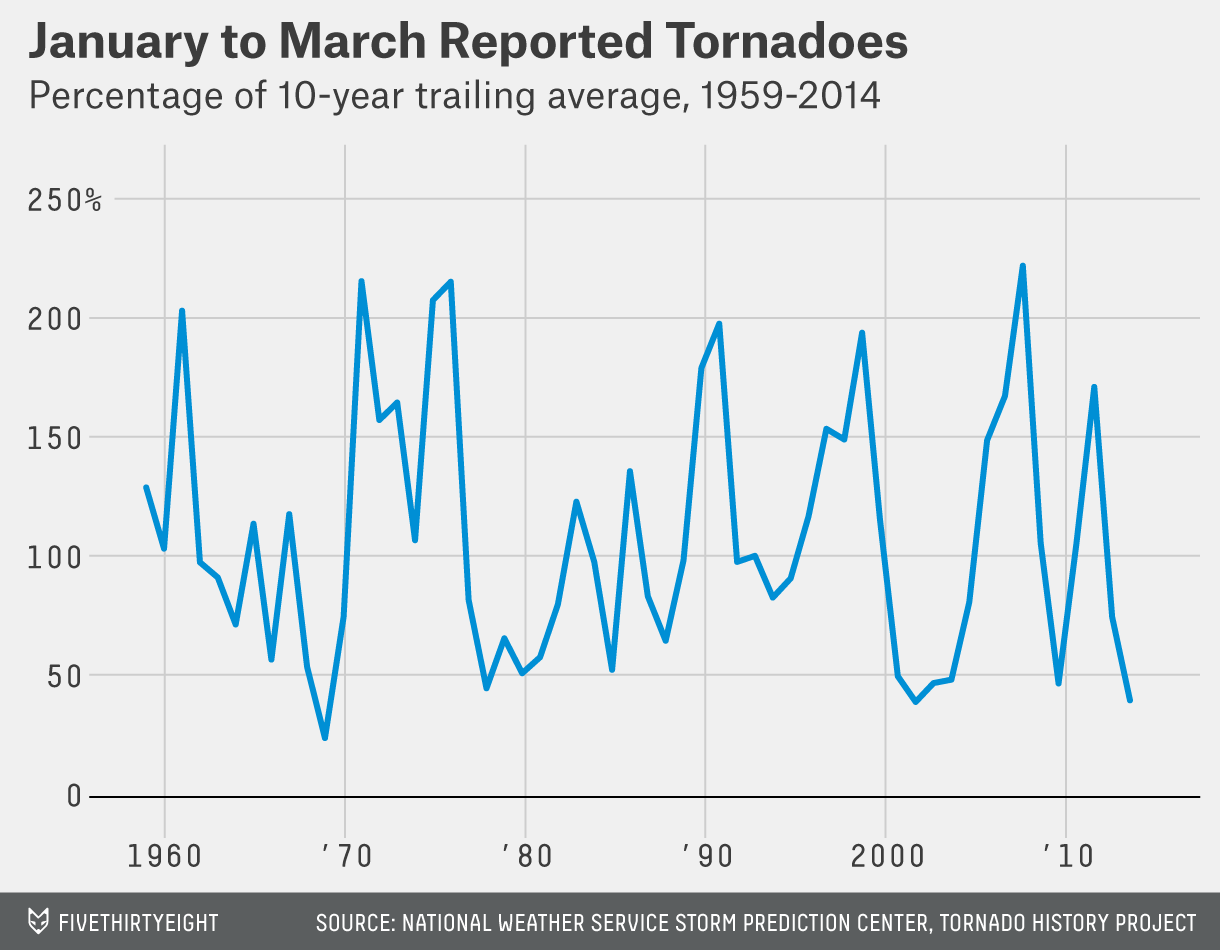 What everyone wants to know is whether this means anything for the heart of severe weather season, the remainder of April through June.

If we take the 10 quietest starts to tornado season (January-March) as a percentage of the 10-year trailing average, and then look at the same data for those years from April through June, the odds favor a normal or busier-than-usual April, May and June. 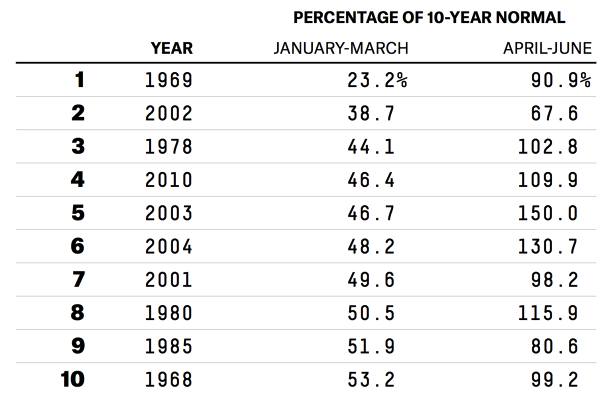 Does that relationship hold up in all years? No, it doesn’t. Looking at a scatter plot of tornadoes reported over the last 30 years in the first quarter of the year versus the rest of the year, we can see almost no relationship. 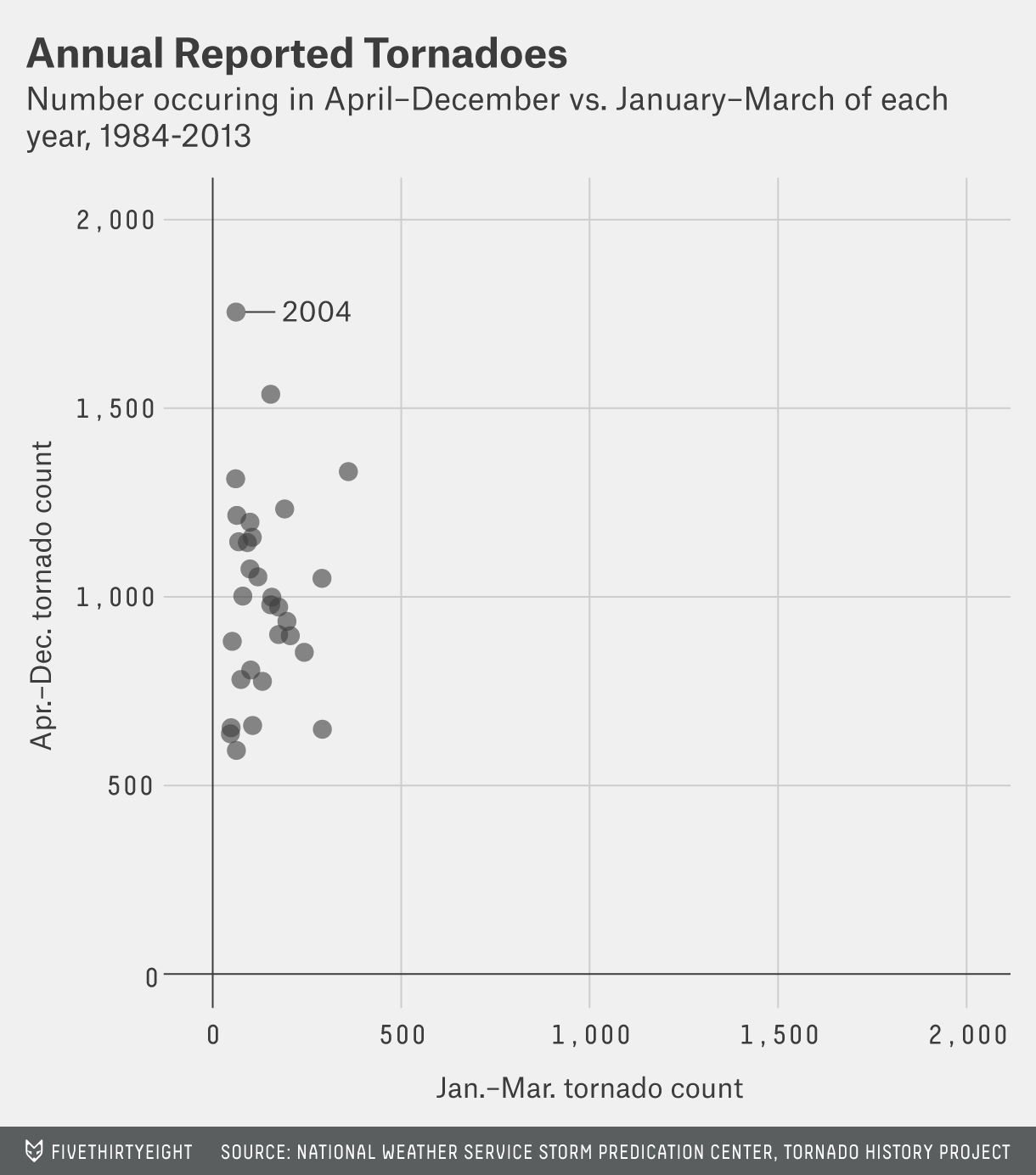 The takeaway is that it’s difficult to make any guarantees after a quiet start to tornado season. The odds that the rest of the year will stay benign are not higher because of a calm start.

Despite an alarming and tragic spate of tornadoes in Indiana and Kentucky in 2012 and in Moore and El Reno, Okla., last year, among other places, we’re seeing far fewer tornadoes nationally. 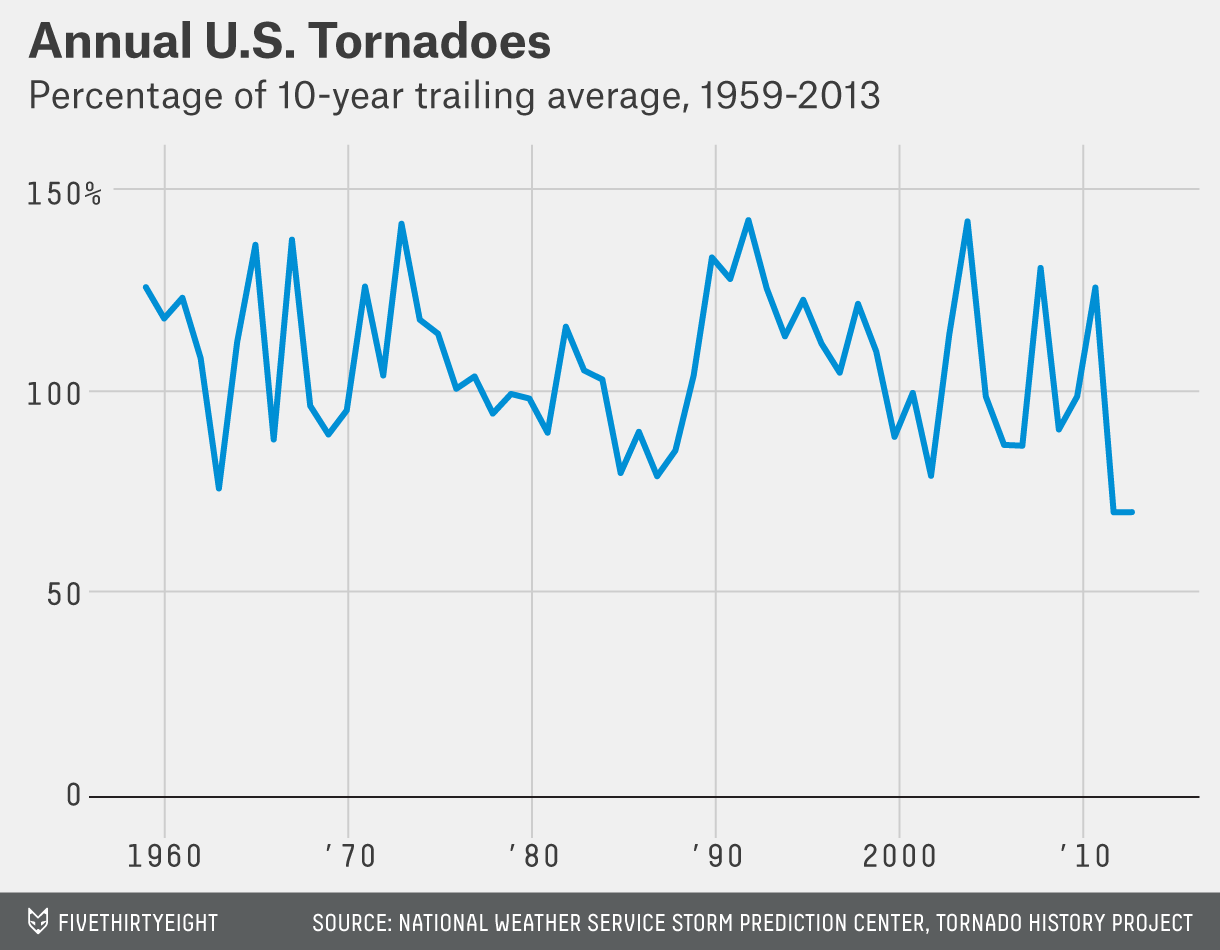 A possible explanation for the current dearth of tornadoes is the ongoing drought in the Plains. Let’s look at the five quietest tornado seasons in the U.S., as a percentage of the 10-year averages shown above, and how precipitation compared to normal in those years. (Images courtesy of the National Oceanic and Atmospheric Administration’s Earth System Research Laboratory.)

Where you see yellow or red on the maps above, the average of precipitation that year was below normal. Below-normal precipitation was widespread in 1963. In 1987, the dry conditions were confined to the Midwest and Southeast. In 2002, the western Midwest and the Plains saw less rain, and in 2012 most of the plains and the Midwest had below-average precipitation. The one outlier year was 2013, but it saw a dry Texas (which accounts for more tornadoes than any other state).

This year has started off rather dry. We know all about California’s drought, and dryness has continued in the Southern Plains. (Image courtesy of the National Oceanic and Atmospheric Administration’s Earth System Research Laboratory.)

Precipitation Anomaly For 2014 So Far 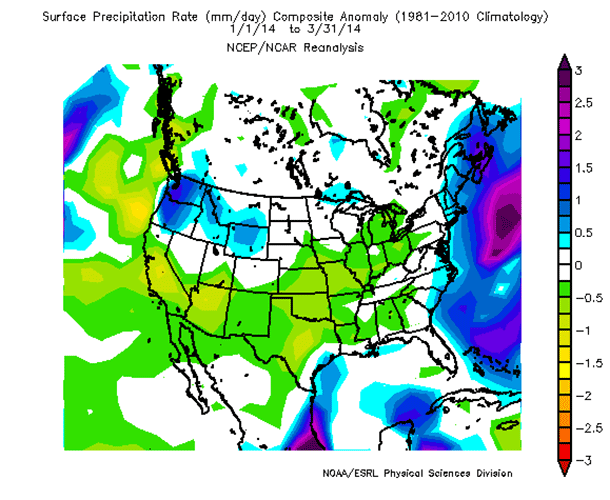 Ultimately, the dearth of rainfall alone probably cannot explain the lack of tornadoes nationally. Global weather oscillations and other factors have likely contributed as well. After all, we’ve had other dry seasons with high tornado numbers (1967, for instance). But it is clear that we’re in the midst of an incredibly impressive drought in tornadoes.

What the chart of annual tornadoes above tells us is that this drought will eventually end — something that should serve as a reminder to all those in tornado-prone locations to have a plan.