Earlier this year, several analysts at the Harvard Sports Analysis Collective took a look at income inequality in the major U.S. sports leagues. Using Gini coefficients, an economic tool that distills the degree of inequality among a set of earners to a single number, the collective found the NHL to be the most equitable and MLB to be the least. The researchers found that salary caps help limit income inequality, essentially. The results are below. A Gini coefficient of 0.0 means that every player has the same income — perfect equality — and a Gini coefficient of 1.0 means that one player takes home all of the income — perfect inequality.

But those are team sports. With the Masters tournament unspooling this week, I started wondering about income inequality for the PGA Tour, a collection of athletes that doesn’t have a salary cap. Surely, after more than a decade of big purses for Tiger Woods, Phil Mickelson and a select few others, golf would prove to be an unequal sport.

It is, but increasingly less so. Since 1980, the PGA Tour has been shifting toward more income equality. How that happened, and how golf differs from other professional sports, shows that high levels of income inequality aren’t inevitable, even when individual athletes have different levels of skill.

The move toward equality has happened despite huge amounts of cash injected into the game. In 2013, 82 golfers each won more than $1 million. Phil Mickelson, a three-time Masters champion, told ESPN this week, “I remember when I was an amateur and I won my first tournament in Tucson in 1991, the entire purse was $1 million, first place was $180,000 and Steve [Loy, my agent] and I would sit down and say, ‘I wonder if in my lifetime, probably not in my career, we would have play for a $1 million first-place check.’ [Now] it’s every week. It’s unbelievable, the growth of this game.”

Since 1980, prize winnings on the PGA tour have increased from $35 million (in 2014 dollars) to $250 million. But the top 1 percent is still winning the same proportion of that money as in the past, even when the number of money winners on the tour fluctuates (from a high of 374 in 1996 to a low of 248 in 2002 and 2010). Using data provided by the PGA Tour, we can see how different tiers of golfers have split up the pot. 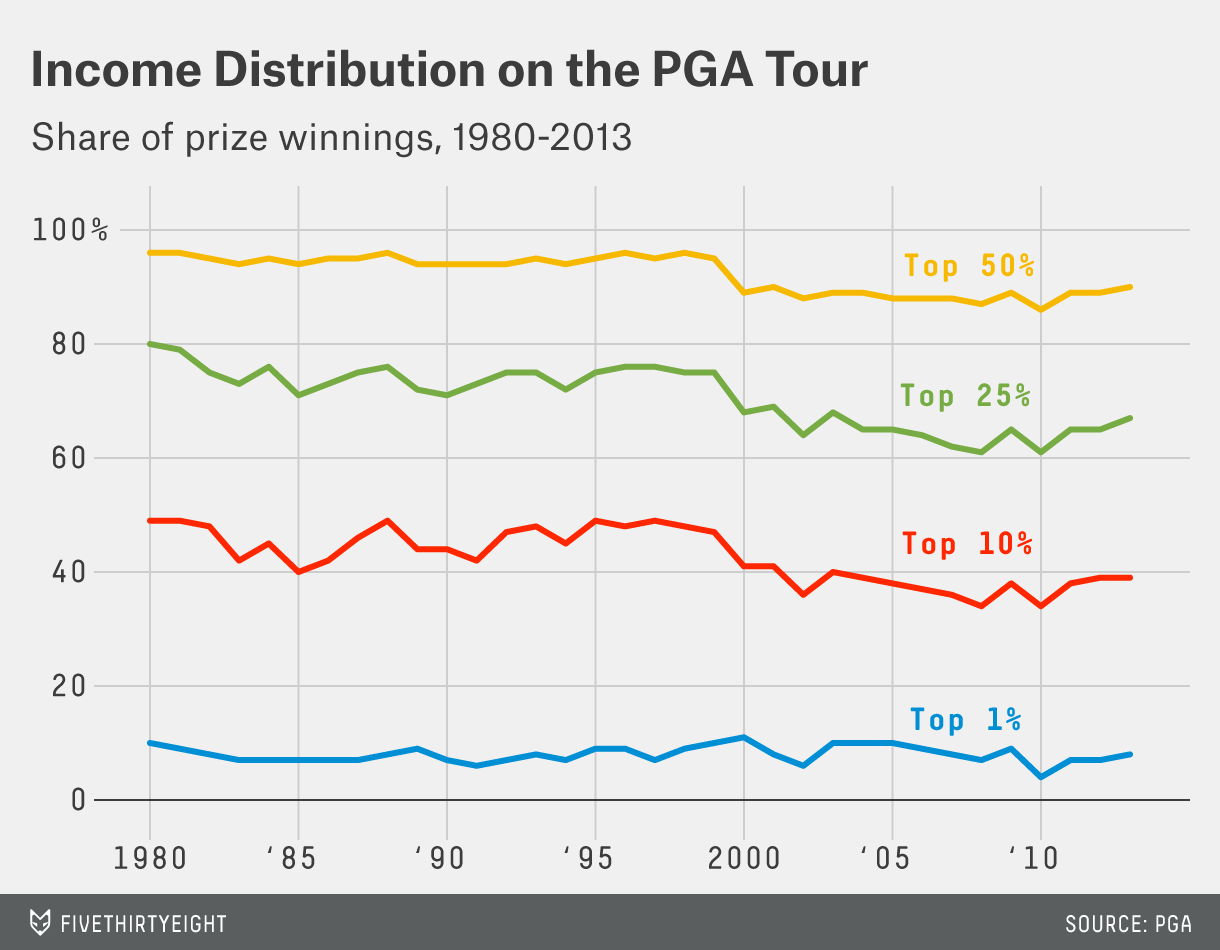 The top 1 percent have seen relative stability in their share of winnings since 1980. In contrast, the share of winnings of the top 10 percent and top 25 percent of earners on the PGA Tour has fallen somewhat. The top 10 percent of earners took home about half of all the prize money in 1980, but less than 40 percent by 2013. Same for the top 25 percent: In 1980 that group took home about 80 percent of all available prize money, but only 65 percent by 2013.

The distribution of winnings across the PGA tour has flattened out a bit, meaning that players on the bottom half of the winnings table are doing relatively better than they did a few golfing generations ago. The proportion of winnings taken home by those in the 25th to 50th percentile of golfers increased by 140 percent from 1980 to 2013. The bottom half of earners saw an even larger gain of 240 percent. A massive increase in overall income doesn’t disproportionately reward those at the top of the scale.

Probably the closest analog to golf is tennis, an individual sport with a collection of players who belong to a tour and make money based on tournament performance. A 2012 analysis of the top-100 ranked tennis players on the ATP (men’s) and WTA (women’s) tours by Ryan Rodenberg, an assistant professor of sports law analytics at Florida State University, found a Gini coefficient of 0.44 for the men and 0.48 for the women. Since 1990, the women’s tour has had greater income inequality than the men’s tour, but in recent years the gap has closed considerably, with the men’s Gini coefficient rising by 0.11 points, likely due in part to the overwhelming dominance of a small number of male players.

From 2007 to 2011, Novak Djokovic, Rafael Nadal and Roger Federer took home between 20 percent and 26 percent of all ATP World Tour winnings. In response to concern from players, both tennis tours have dramatically increased the amount of tournament winnings paid out to early-round losers. Wimbledon, for instance, increased the purse awarded to losers in the first three rounds by 90 percent over the past two years.

Even in these comparatively simple settings — mini-economies if you will — there can be a very large range of outcomes on inequality. Looking at golf alone might be misleading. Looking across sports tells us that high levels of inequality aren’t inevitable.