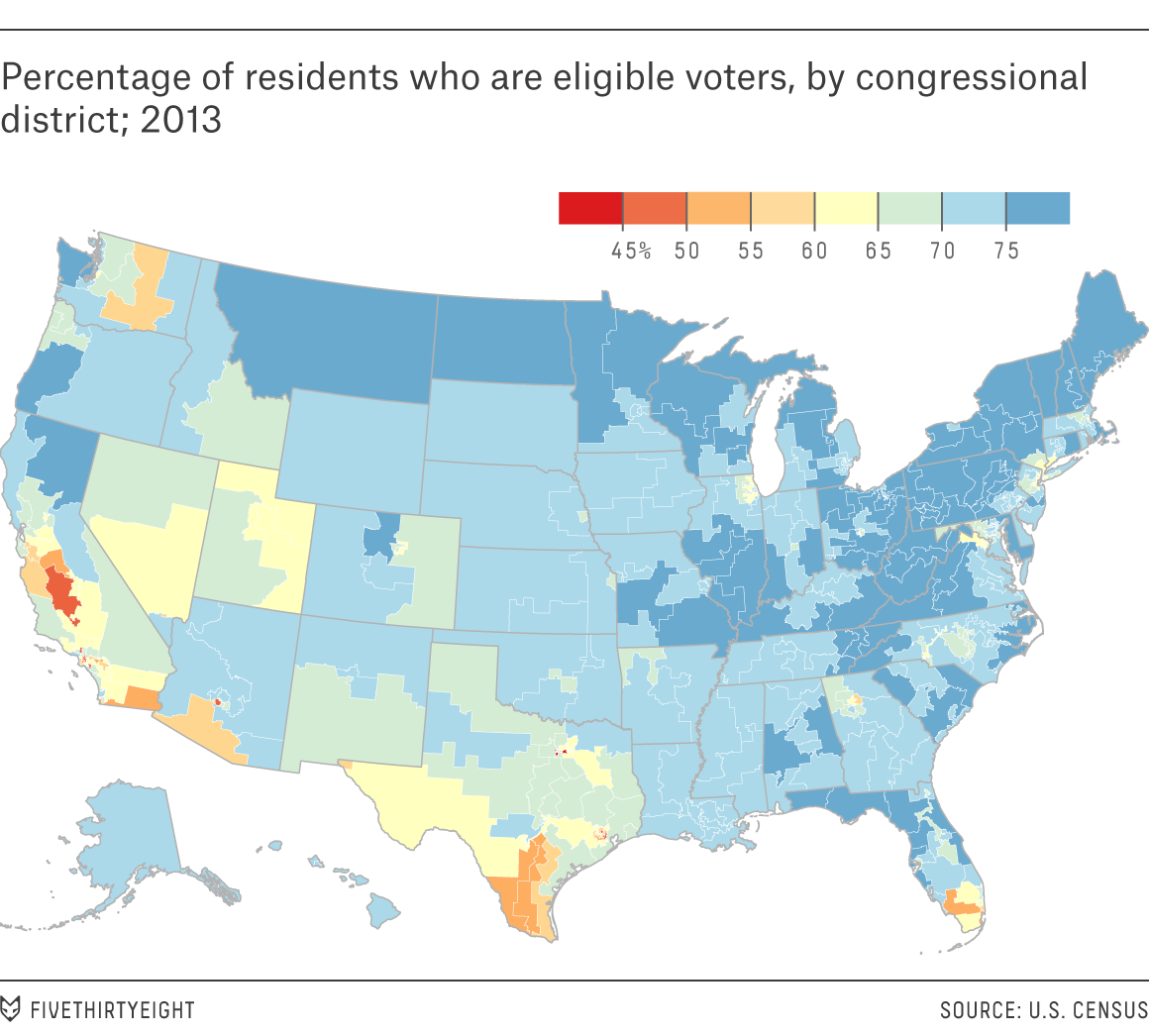 This week, the Supreme Court agreed to hear a lawsuit filed by conservative activists in Texas that could redefine the principle of “one person, one vote” as we know it. And if the Court sides with the plaintiffs, Republicans could stretch their already-historic majorities in the House and state legislatures even wider — the GOP would be helped just slightly in presidential elections.

Is Congress’s job to represent people, or just voters? Currently, all states are required to redraw their political boundaries based on the Census’s official count of total population every 10 years, which includes minors and noncitizen immigrants. But the Texas plaintiffs argue that states should be allowed to apportion seats based on where only U.S. citizens over 18 years of age live.

It seems like a minor detail, but it’s actually a major distinction. The decennial Census doesn’t track citizenship data, but the Census’s American Community Survey does. And although all 435 U.S. congressional districts have roughly equal total populations, the number of eligible voters and rates of actual participation can vary wildly from place to place.

For example, in Florida’s 11th District, home to the largely white retirement mecca of The Villages, 81 percent of all residents are adult citizens. But in California’s heavily Latino 34th District, anchored by downtown Los Angeles, only 41 percent of all residents are eligible to vote. The variations across districts in terms of actual turnout can be even more eye-popping. According to results compiled by Polidata for the Cook Political Report, Montana’s lone House district cast 483,932 votes for president in 2012, more than four times the tally in Texas’s 29th District, 114,901.

A move toward counting only eligible voters, as logistically difficult as it may be, would drastically shift political power away from the urban environs with minorities and noncitizens, and toward whiter areas with larger native-born populations. That’s bad news for Democrats: Of the 50 congressional districts with the lowest shares of eligible voters, 41 are occupied by Democrats (nearly all are Latino-majority seats). Meanwhile, of the 50 districts with the highest shares of eligible voters, 38 are represented by the GOP.

Most legal scholars are skeptical that this case will change the way House seats and Electoral College votes are apportioned to states every 10 years; after all, the Constitution pretty clearly references the role of the Census’s population count in this process.

But let’s lay out a hypothetical for a minute. What would happen if counts of voters rather than people were used for both reapportionment (allotting seats among the states) and redistricting (drawing boundaries within states)? States with large Latino populations would be penalized. Based on the 2013 ACS data, California would lose six House seats, Texas would lose four and New York one, while a smattering of other states would each gain one seat.

Next, the partisan implications: Which party would gain or lose those seats? To arrive at an estimate, we calculated the percentage of eligible voters currently living in districts represented by Democrats and Republicans in each state and applied that percentage to the “new” seat total. For example, Republicans currently represent 25 of Texas’s 36 districts (69 percent), but an even higher share (73 percent) of Texas’s eligible voters. If Texas lost four seats and only adult citizens were counted, the GOP seat edge might expand to 24-8.

If we repeat this calculation across all states, a redistribution of representation based on eligible voters could result in a net gain of roughly eight seats for House Republicans, who are already sitting on a historically large majority of 245 seats.1

What’s interesting, however, is that the possible shift would affect only the closest of presidential elections. If you were to replay the 2012 election under the new lines, President Obama would win 331 electoral votes, only one fewer than he actually did.

Many of the districts Republicans would gain are in states Obama won. Iowa, Michigan, Ohio, Pennsylvania and Virginia all went for Obama thanks to his strength in the cities, but they lean Republican on the congressional district level, in part because Republican voters are more evenly distributed throughout the state. Obama would have gained five electoral votes from these states thanks to eligible voter reappointment.

That doesn’t mean Republicans would completely strike out on the presidential level in reapportionment. Democrats would lose six electoral votes from California and one from New York. Republicans would gain in the fairly safe Republican states of Kentucky, Missouri and Montana, as well as the Republican-leaning state of North Carolina. But these changes are mostly canceled out by the aforementioned ones.

Republicans would, however, seem to have a better chance of winning the presidency in a very close election. If all states were shifted by 3.9 percentage points from their 2012 result to create a tie in the national vote, Democrats would still win 272 electoral votes under the current lines. For Republicans to win the Electoral College, it would take a shift of 5.4 percentage points nationally.

Under the reapportioned lines, a 3.9 percentage point shift from the 2012 result would create a tie in the Electoral College. Republicans would win all the states they did in 2012 plus Florida, Ohio and Virginia (barely). In the event of an Electoral College tie, the House of Representatives, where Republicans hold a clear edge in House delegations by state, would decide the election. Hence, a Republican would be more likely to be elected president.

Democrats are privately confident that the Supreme Court will rule against the conservative plaintiffs, and they better be right if they want to maintain the position they have in House and presidential elections.

UPDATE (May 29, 7:53 p.m.): Rick Hasen, an election law professor at the University of California, Irvine, pointed out that the original headline on this article gave the impression this case was likely to change the apportionment of House seats and Electoral College votes. As the story points out, such a change is unlikely. We’ve changed the headline to avoid any confusion.