6:53 p.m. | Updated There’s some Twitter sentiment to the effect that today’s crash in stock prices is bad news for President Obama. That doesn’t seem like a terribly controversial conclusion — but I’m not so sure it’s true.

Let’s be clear: the economy is struggling, and that’s a gigantic problem for Mr. Obama. In my view, his chances of re-election have dropped from perhaps two-in-three as a couple of months ago to more like a toss-up as the economic numbers have deteriorated.

But is the stock market a concern for Mr. Obama above and beyond the economic fundamentals?

Certainly, markets have good reasons for pessimism on the basis of the recent numbers. And they may have been overvalued to begin with. But today’s crash, in particular, came on a relatively newsless day, and reeks, at least in part, of panic.

The paradigm case for an exogenous decline in the market — that is, one which is not well explained by economic fundamentals — is Black Monday, the Oct. 19, 1987 crash in which the Dow Jones lost almost 23 percent of its value for reasons that remain poorly understood by traders, economists, and mathematicians. Unlike many other crashes, stock prices did not rebound particularly quickly following Black Monday, instead recovering only a part of their value over the medium-term. 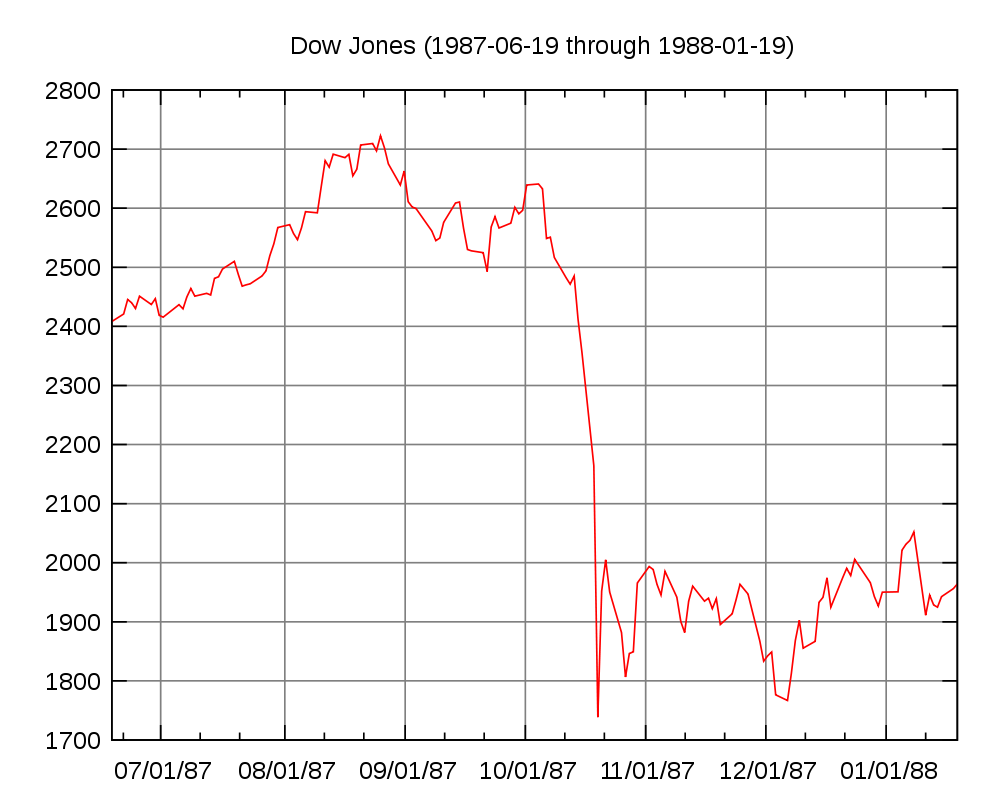 So what happened to the approval ratings of then-president Ronald Reagan?

Nothing at all. When Gallup released a poll on Reagan a week after the crash, his approval rating stood at 51 percent. That was actually two points higher than the 49 percent approval rating Reagan had when Gallup had previously taken his temperature in early September, 1987. 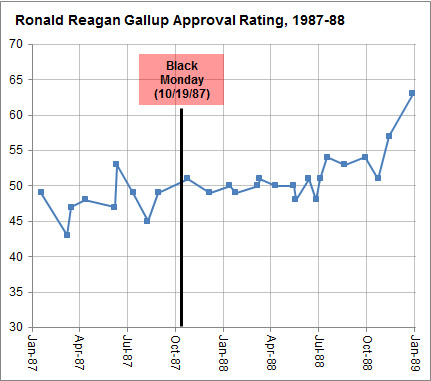 Sure, it’s just one data point. But it’s a pretty robust one given how steep the 1987 crash was and how divorced it was from the economic fundamentals. It’s almost like an experiment a political scientist would dream up to test the effects of the market on presidential approval. And it suggests that the stock market is among the least of a president’s worries.

Where the crash could have more effect is on perceptions about the deficit-reduction deal that Mr. Obama and Congress brokered over the weekend, a bill which was already fairly unpopular and which Americans were already concerned could have negative economic effects.

Mr. Obama signed off on the deal. But polls so far have found that Americans assign more of the responsibility for it to Republicans, which makes sense since it was made largely on their terms and since they were more likely to vote for the bill in Congress.

Voters’ Pavlovian reaction may simply be that fiscal austerity equals pain, which could complicate Republican messaging in the long-run.

In the short-run — depending on what happens with the markets over the next several trading days as well as with tomorrow morning’s jobs report — the question becomes whether Mr. Obama attempts to exploit the crisis by calling for stimulative measures that were lacking in the deal he signed with Republicans.

Update: For more of an “it’s complicated” view, see this paper by Alison B. Alter and Lucy M. Goodhart suggesting that stock market performance does have an effect on views of the president — or this one, by Michael S. Lewis-Beck and Charles Tien, suggesting that it doesn’t.

It isn’t surprising that academics come to different conclusions about this because it’s a very difficult question to study. Underlying economic performance (which certainly does matter to a president) and stock market returns are hard to separate out from one another, which creates all kinds of methodological problems.

But what the paper by Ms. Alter and Ms. Goodhart suggests is that stock market performance matters more early in a president’s term, when voters have less information to assess the president’s handling of the economy.

In this instance, voters already have strong views about the economy — they think it stinks. Moreover, we have the somewhat unique circumstance of the market downturn having followed a high-visibility action in Congress, for which Congressional leaders were assigned more direct responsibility than the president, at least according to the polls.

Also of note is that the stock market has performed well on balance while Mr. Obama has been in office. Even after the crash, the S&P 500 is up 41 percent since Mr. Obama was inaugurated. Perhaps that has prevented his approval numbers on the economy from being even worse than they already are. But it may also be that voters are more worried about things like jobs — they have plenty of other evidence to weigh for and against the president.

So the proper conclusion here is really that we don’t know what’s going to happen. Which I know isn’t terribly satisfying.

Really, I’d just say to be wary about snap judgments, and keep in mind that voters are assessing not just the president but also the Congress. From a 30,000-foot level, the past few weeks have probably been bad for the re-election efforts of almost everyone in Washington, and today won’t have made them better.