Football season is nearly here, which for many of us means that weekend productivity is about to hit an annual low. Every so often teams will put on contests for tickets or merchandise, but one NFL team is engaging fans in a different way this year. The Indianapolis Colts are offering half a million dollars to whoever can accurately predict the outdoor kickoff temperature for the team’s 20 games, from the preseason through the end of the regular season.

Entries are due Thursday at 12:01 p.m. EDT. On top of submitting temperatures, you also need to correctly predict whether the roof of Lucas Oil Stadium in Indianapolis will be open for each home game. And if one of the Colts’ late-season Sunday games is “flexed” to a different time slot, the forecasted temperature you submit needs to reflect that changed kickoff time. Get a single temperature or roof position wrong, and you’re eliminated from contention.

My initial reaction to this contest was similar to Carl Reiner’s character’s expression of overwhelming doubt about a plan to rob a casino in “Ocean’s Eleven.” The best public example of a foray into long-range weather forecasting has been done by AccuWeather, which provides 45-day forecasts. However, according to more than one accuracy test, these forecasts have struggled and certainly wouldn’t win AccuWeather $500,000 from the Colts.

So is it even possible for anyone to do this perfectly? And if so, just how lucky would that person have to be?

One of the best ways to forecast weather far into the future is to use climatology as a guide. Unfortunately, in a contest where you need to be perfect, not just close, climatology can only help so much. But you can at least narrow down the possibilities. Using the weather data archive on Weather Underground, as well as from the Midwest Regional Climate Center, I collected the temperatures at kickoff time from 1984 to 2013 for the dates and sites of the 20 Colts games this season.1

Let’s start by addressing temperatures: How much volatility and variability are we dealing with?

We can look at each week to see what the spread in observed temperatures has been since 1984. Then, assuming we want to avoid forecasting extreme temperatures as a way to improve our odds, we can also look at the 25th, 50th (or median) and 75th percentiles to narrow down our choices to a more realistic range: 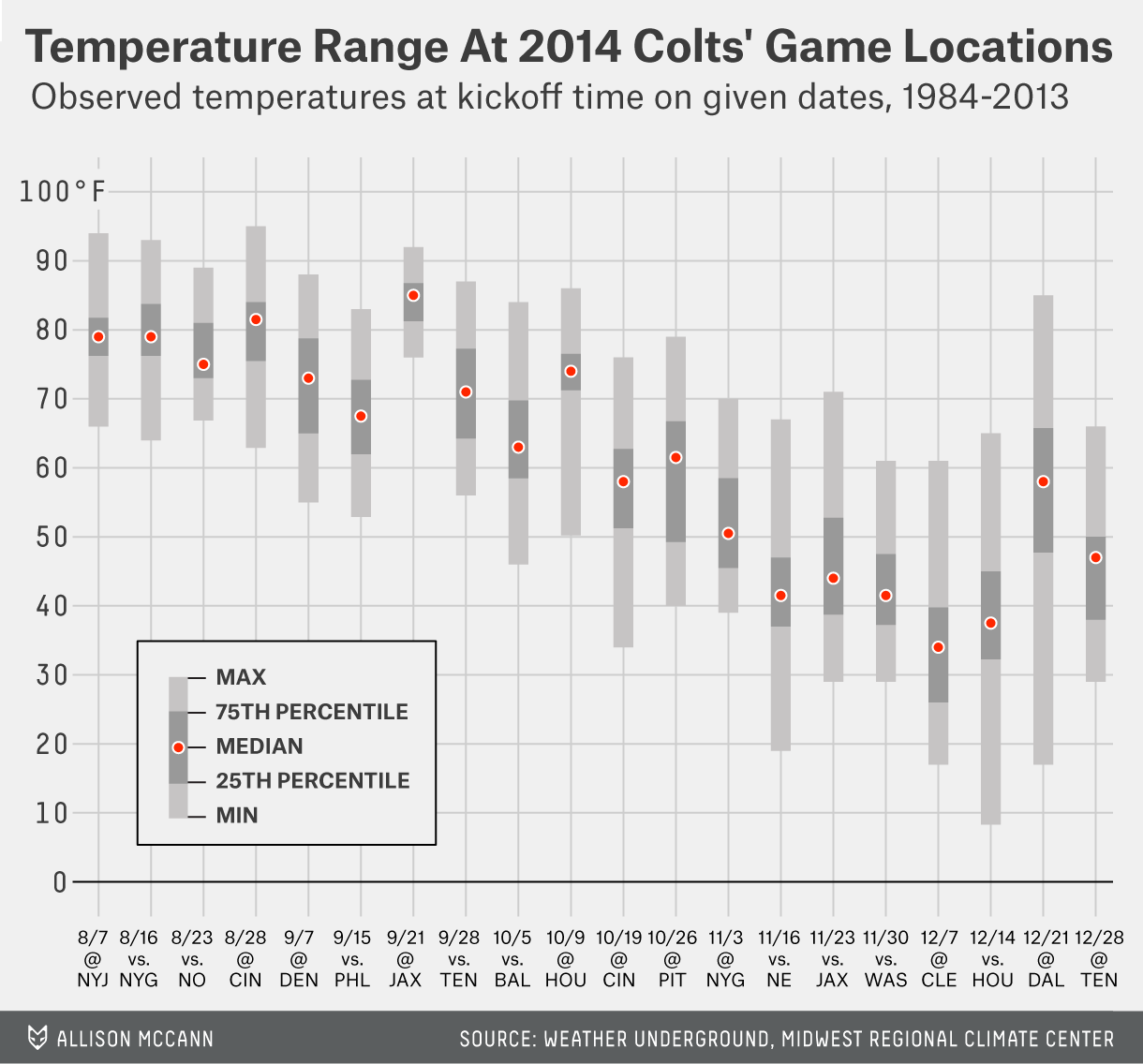 A few things stand out: Both the ranges and the boxes tend to get larger as you go deeper into the football season. Temperatures in the summer tend to be a bit more stable than in the fall and winter. Because the jet stream has retreated far enough north in the warm season, you have fewer cold fronts to contend with, and there’s more moisture in the atmosphere. All of this can generally reduce the range of temperatures in the summertime. As the season progresses, the spread in observed temperatures expands. The games on Sept. 21 in Jacksonville, Florida, and Oct. 9 in Houston are the most notable exceptions. Thanks to their southern latitude, those cities still tend to be in a summer-type pattern in early fall, keeping local temperatures a little more stable.

Dallas, the site of the Dec. 21 game, has the most volatility at kickoff time of any place where the Colts will play this season. The High Plains tend to see some incredible temperature swings in the fall and winter.

By comparison, you have a much greater chance — 1 in 9.2 quintillion — of predicting a perfect bracket for the annual NCAA men’s basketball tournament, and that’s before you improve your odds with the statistics and knowledge of each matchup.

Oh, wait. You also have to forecast the Lucas Oil Stadium roof position for each Colts home game. The basic rules are that the roof is closed when precipitation is in the area, wind gusts exceed 40 mph, or the temperature drops below 40 degrees.3 This, of course, is all subject to weather forecasts and a human element. In other words, even if the forecast is wrong, it may be enough to justify keeping the roof closed.

And if you haven’t had enough by now, let’s answer this question about flex scheduling. Is it worth it to even bother trying to figure that out? The NFL can “flex” a Sunday game into a different time slot, starting at week five.

Since the Dallas Cowboys have already punched their playoff ticket, let’s look at both flexing scenarios for their game with the Colts on Dec. 21. While it’s unlikely the 3:25 p.m. start time will be flexed to 12:00 p.m., the chart at left shows the possibilities.

Because the variation in temperature is so small, it probably doesn’t benefit you much to worry about the flex scheduling aspect. At best, you’ll improve your odds a minute fraction.

Given the immense number of options that exist in this contest, Colts fans will need more than Andrew Luck on their side if they wish to win. Warren Buffett’s billion-dollar NCAA bracket challenge looks easy by comparison, and offers a much better payoff!

My entry in the Colts’ Half A Million Dollar Weather Challenge is below:4 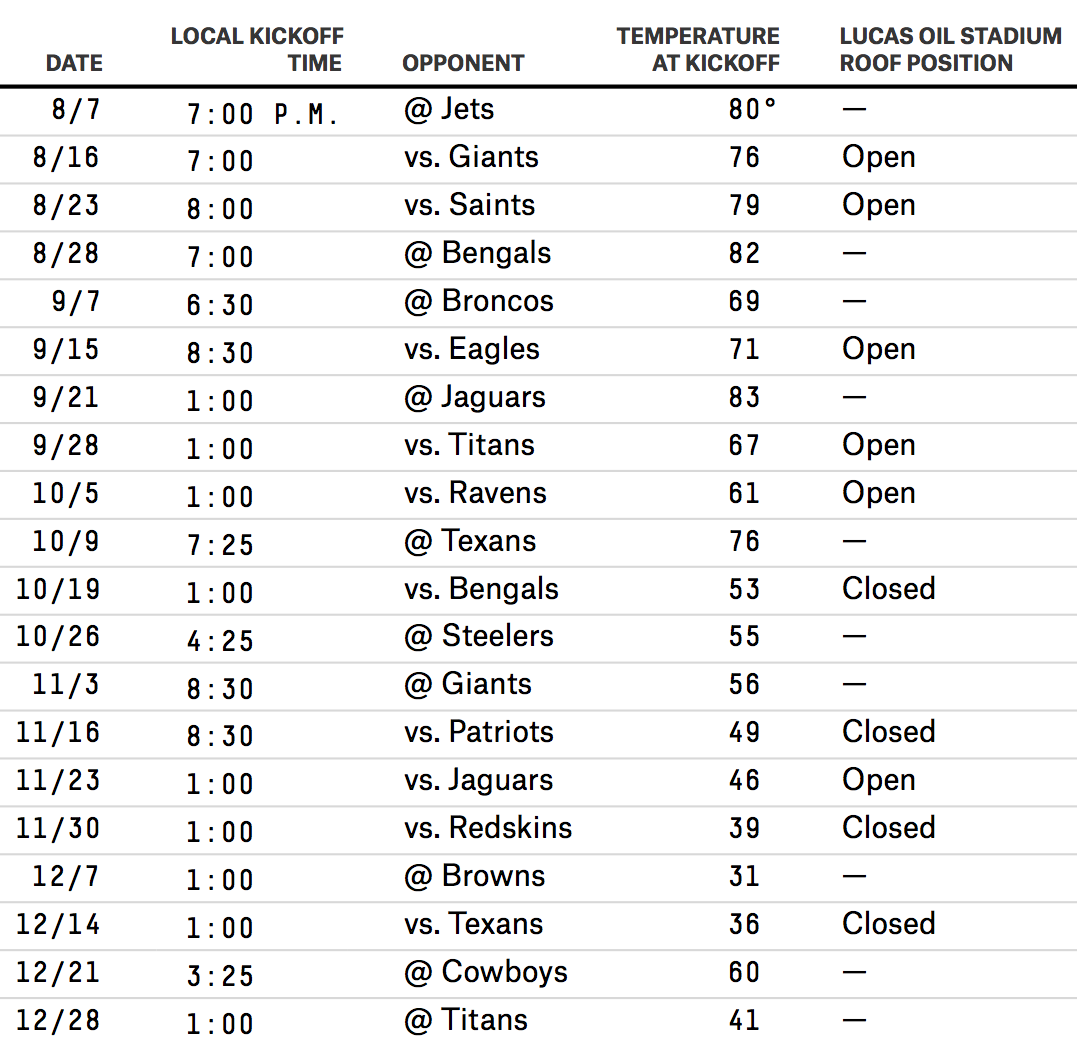