North Dakota was barely dented by the recession. Its unemployment rate never rose above 4.3 percent and sits at 3.3 percent today.

Since 2009, personal incomes in the state have grown 5 percent faster than those in the United States as a whole.

Given that the state’s economy is not just acceptable but bordering on being good, you might expect President Obama to have a reasonable approval rating there. Not that North Dakota is inherently the friendliest state for Democrats: it’s voted Republican for president every year since 1964. However, it did give Mr. Obama a respectable 45 percent of its vote in 2008.

But it isn’t so. From January through June 2011, Mr. Obama’s approval rating averaged just 37 percent in North Dakota, according to
Gallup polling, at a period during which it averaged 47 percent nationally — lower than in all but seven other states. In fact, Mr. Obama’s approval rating, which averaged 55 percent there in 2009, has dropped more in North Dakota than in any other state. In short, the state with the best economy is just about the keenest to downgrade its views of Mr. Obama.

The North Dakota data point may be something of an anomaly: It’s a low-population state, and Gallup conducted only about 300 interviews there during its winter and spring polling.

Nevertheless, there is no overall relationship between Mr. Obama’s state-by-state approval ratings and statewide economic performance.

Some of the numbers even point in the opposite direction: Mr. Obama’s approval ratings are holding up better in states where the economy is worse, and vice versa.

The chart that follows, for example, compares the unemployment rate in each state as of April 2011 to the decline in Mr. Obama’s approval rating there from 2009 to the first half of 2011. As you can see, there is essentially no relationship. In fact, the correlation runs in the opposite direction of what you might expect — Mr. Obama’s approval rating has declined slightly less in states with higher unemployment, although the relationship is not statistically significant. 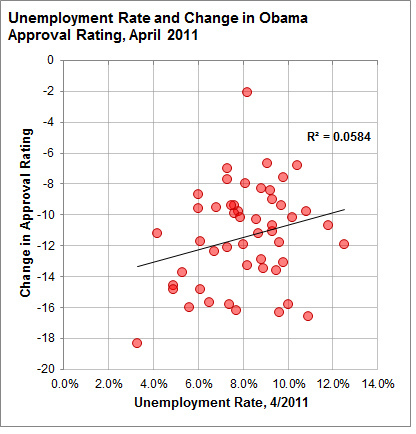 Perhaps it’s the change in unemployment rate that matters rather than the absolute number? We can track that relationship, too. The next chart presents a comparison of the change in the unemployment rate from mid-2009 to early 2011 to the decline in Mr. Obama’s approval rating over the same period. Once again, there is no correlation: 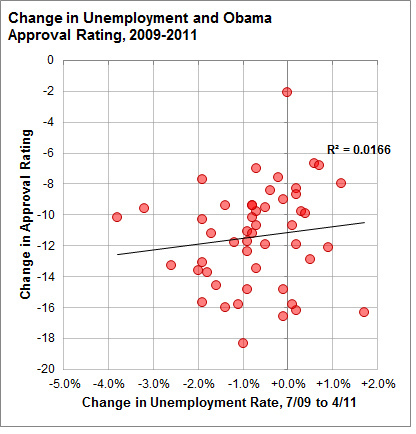 Historically, however, the unemployment rate has been a surprisingly poor predictor of an incumbent president’s electoral performance.

Economists have found that income-based measures have performed more promisingly. The government releases estimates of personal income in each state once per quarter. I averaged the annualized change in personal income growth for the seven quarters between summer 2009 and winter 2011 (the most recent data available) and compared it to the change in Obama’s approval rating in the state over the same period. 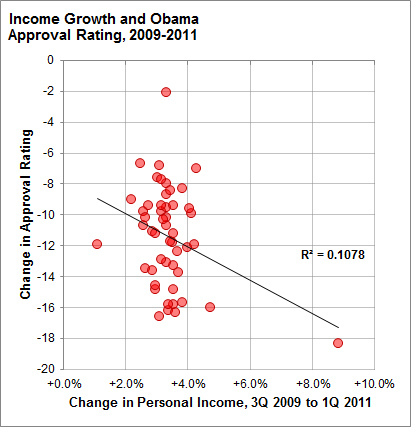 North Dakota, with nominal income growth exceeding 8 percent on an annualized basis during this period, is quite a clear outlier in the chart. Still, even if you ignore it, the relationship does not run in the direction you might expect. If anything, states with higher income growth have tended to downgrade their views of Mr. Obama somewhat further.

As I mentioned, however, states like North Dakota have relatively small populations, and therefore the approval rating estimates (and to some extent also the economic data) are subject to large margins of error. A simple workaround is to limit the analysis to those states where Gallup conducted at least 1,000 interviews between January and June 2011, which represents essentially the 30 largest states.

Here is the comparison between the unemployment rate and the change in approval ratings for the 30 largest states only: 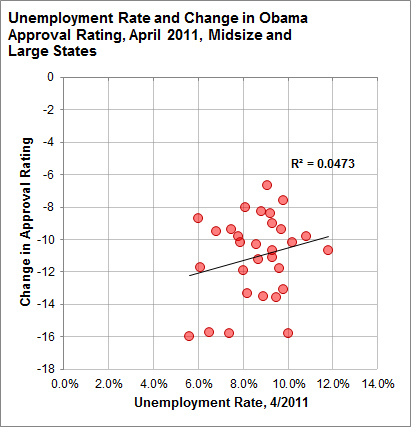 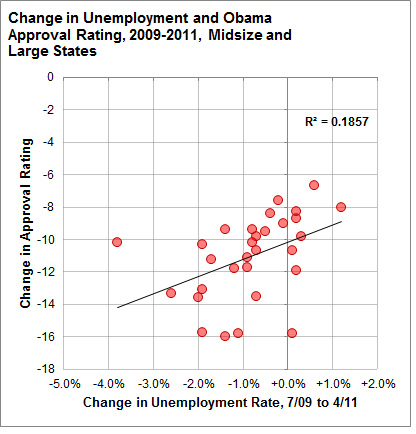 This relationship is actually statistically significant, although just barely. But it runs in the “wrong” direction — Mr. Obama’s approval ratings have declined more in states where the employment picture has gotten better. 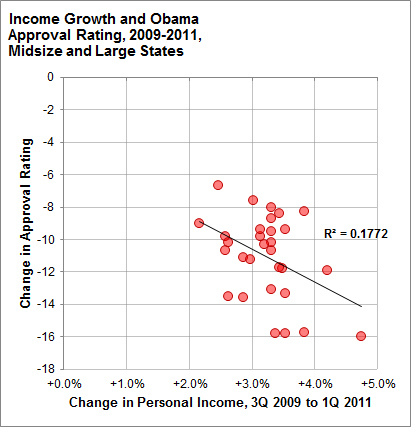 I’ve run through several other permutations of this analysis — accounting for other factors like the share of the vote that Mr. Obama received in 2008, or the amount of stimulus funding that each state obtained — and the results have always been the same. The relationship between Mr. Obama’s approval ratings and the economic performance of each state has been either neutral or somewhat inversely correlated.

What to make of this? Well, I’m open to ideas. It certainly isn’t an intuitive finding.

I don’t know that the right conclusion is that the economy doesn’t matter to Mr. Obama. Instead, perhaps voters are judging him by subjective rather than objective standards.

Gallup, for instance, publishes data in each state on whether voters think the economy is getting better or worse — a measure of consumer confidence. For this variable, the relationship finally runs in the direction that you might expect. States where voters tend to have more optimistic views about the economy are associated with higher approval ratings for Mr. Obama. The correlation is statistically significant, although not strongly so. 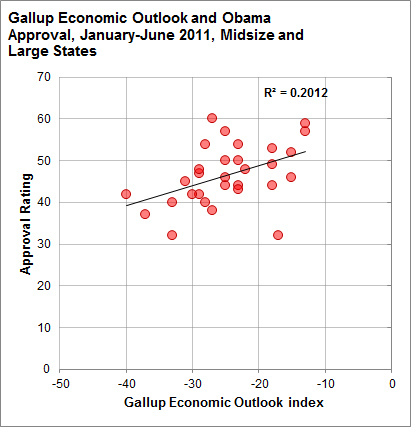 Correlation is not causation, however, and it’s not clear whether these states view Mr. Obama more warmly because they have more optimistic views about the economy or rather whether the reverse is true.

In fact, the evidence probably hints at the latter: perceptions about Mr. Obama tend to drive feelings about the economy as much as the other way around. The reason to think this is because economic optimism is strongly correlated with the vote share that Mr. Obama received in each state in 2008, long before voters would have reason to blame him for economic conditions. The voters in states where economic confidence is low tended not to like Mr. Obama to begin with.

Perhaps you can read this as good news for Mr. Obama. Based on the evidence from the state level, it’s not entirely clear that “hard” economic data, like the high unemployment rate or the slow growth in income, is driving the decline in his approval rating. Instead, voters seem to be engaging in a more complex, subjective and partisan calculation. This suggests that perceptions of the economy could potentially improve, probably improving Mr. Obama’s approval rating along with it — even if the fundamentals don’t change much, as they seem unlikely to do.

But there is a contrary hypothesis that may be just as compelling, and that would be bad news for Mr. Obama.

Economists differ on the extent to which they think business and consumer confidence are causes of, rather than symptoms of, poor economic performance. But the economy is probably driven by psychological factors to at least some extent. A lack of business confidence, certainly, does seem to be hampering the recovery: corporate profits have been very high recently, so businesses are sitting on a ton of cash — but they are electing not to invest it despite interest rates being very low. 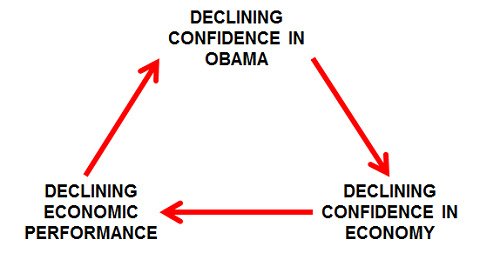 Yes, the flow could in theory begin to reverse course and move in the other direction. The 14 months between now and November 2012 are a lifetime in terms of econometric forecasting, and periods of economic uncertainty are associated with higher volatility. Economic forecasts are allowed to miss to the upside. As we get closer to the election, however, businesses may decide just to wait it out and see what happens after 2012, after which time the nation’s fiscal direction may become clearer.

Still, this doesn’t wholly explain the North Dakota Paradox. Certainly, given how murky the data is at the state level, I would be careful about any statistical models that claim to identify a neat, clean and exceptionally precise relationship between economic data and electoral performance at the national level. And I would be wary of any hard-and-fast claims along the lines of “if unemployment is above 8.5 percent on election day, Mr. Obama will lose.” There’s no doubt that the economy is a huge problem for Mr. Obama, but this may not be the type of election where its effects can be boiled down to a formula.