Another World Cup has ended with a 120-minute, 1-0 final. In 2010, it was Spain’s Andrés Iniesta who broke a 0-0 match with a goal in the 116th minute against the Netherlands. On Sunday, Germany’s Mario Götze settled things with a brilliant finish in the 113th minute.

Is the finale of the biggest tournament in the world destined to be a low-scoring defensive battle?

Not necessarily. But it could take a change in tactics and, more importantly, better finishing, to reverse the trend.

Defenses have dominated World Cup final matches for the past quarter-century. Since 1990, finalists have combined to average a goal and a half per 90 minutes — or just one-third of the rate in the finals from the first World Cup, in 1930, through 1986. 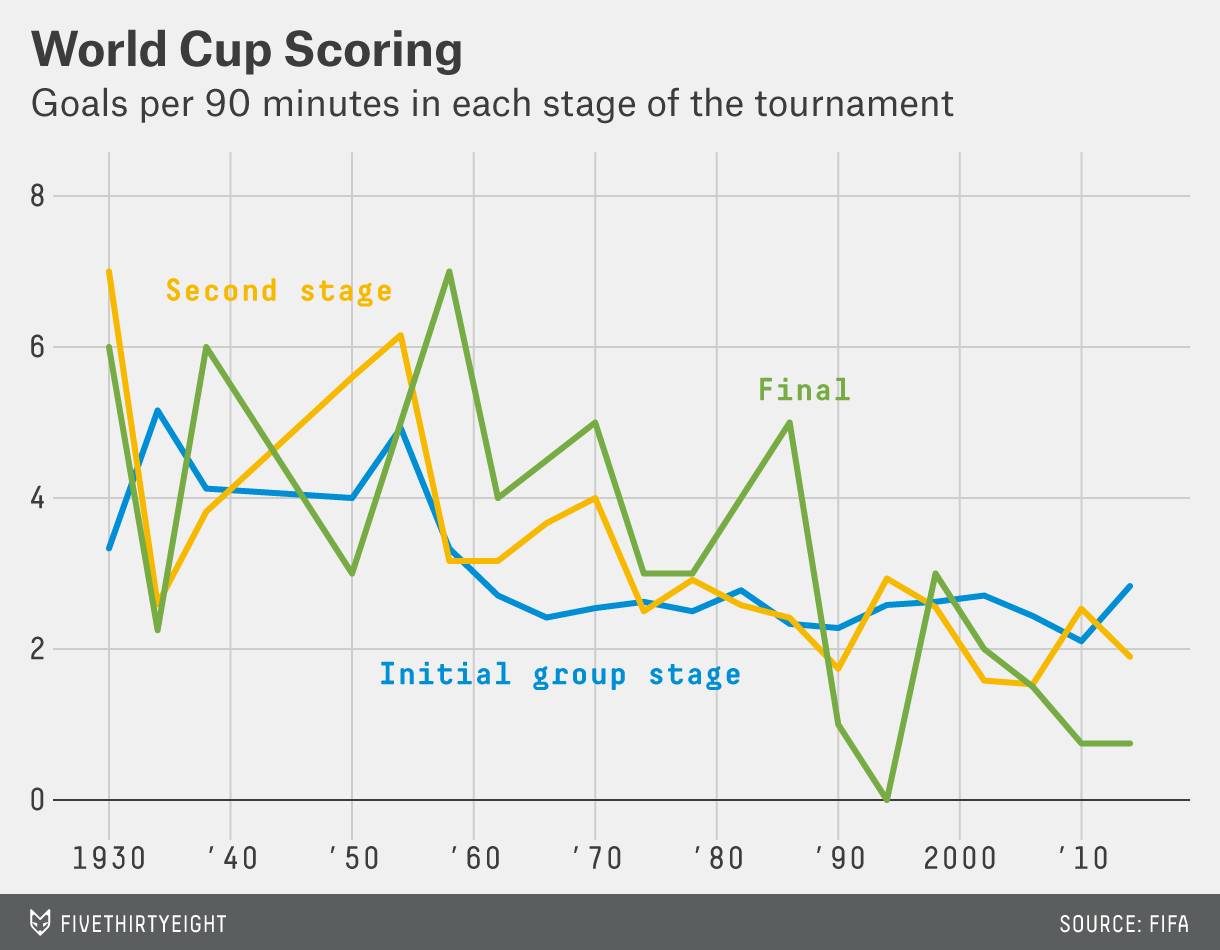 There are several plausible causes of the scoring slowdown. The match’s high stakes — a chance to win the sport’s biggest trophy, awarded only once every four years — might make teams risk-averse. Finalists usually have among the best defenses in the world. They also generally have top offenses, but perhaps great defense trumps great offense in soccer. There’s also another possibility: Maybe players just haven’t been shooting accurately in the final.

Let’s take these possibilities in turn. The low scoring in the final, combined with much higher scoring in the third-place match, prompted the Economist’s sports blog to suggest that tactics are to blame. In the early years of the tournament, with fewer countries in contention and less global attention, teams shot freely. But lately “managers have placed ever-more emphasis on keeping their adversaries off the scoreboard,” the Economist suggested.

There’s a problem with that theory, though: The final match generally has nearly the same quantity and quality of scoring chances as do the games leading up to it. TruMedia, which supplies soccer data to ESPN, has created a model for expected goals. The model is built using several years’ worth of shots at the club level, and takes into account the position of the shooter and other factors, including how the match analyst employed by Opta logs the shot. According to the model, the expected goals per 90 minutes in recent finals hasn’t dropped off much from the total expected in earlier knockout matches, or in the group stage. 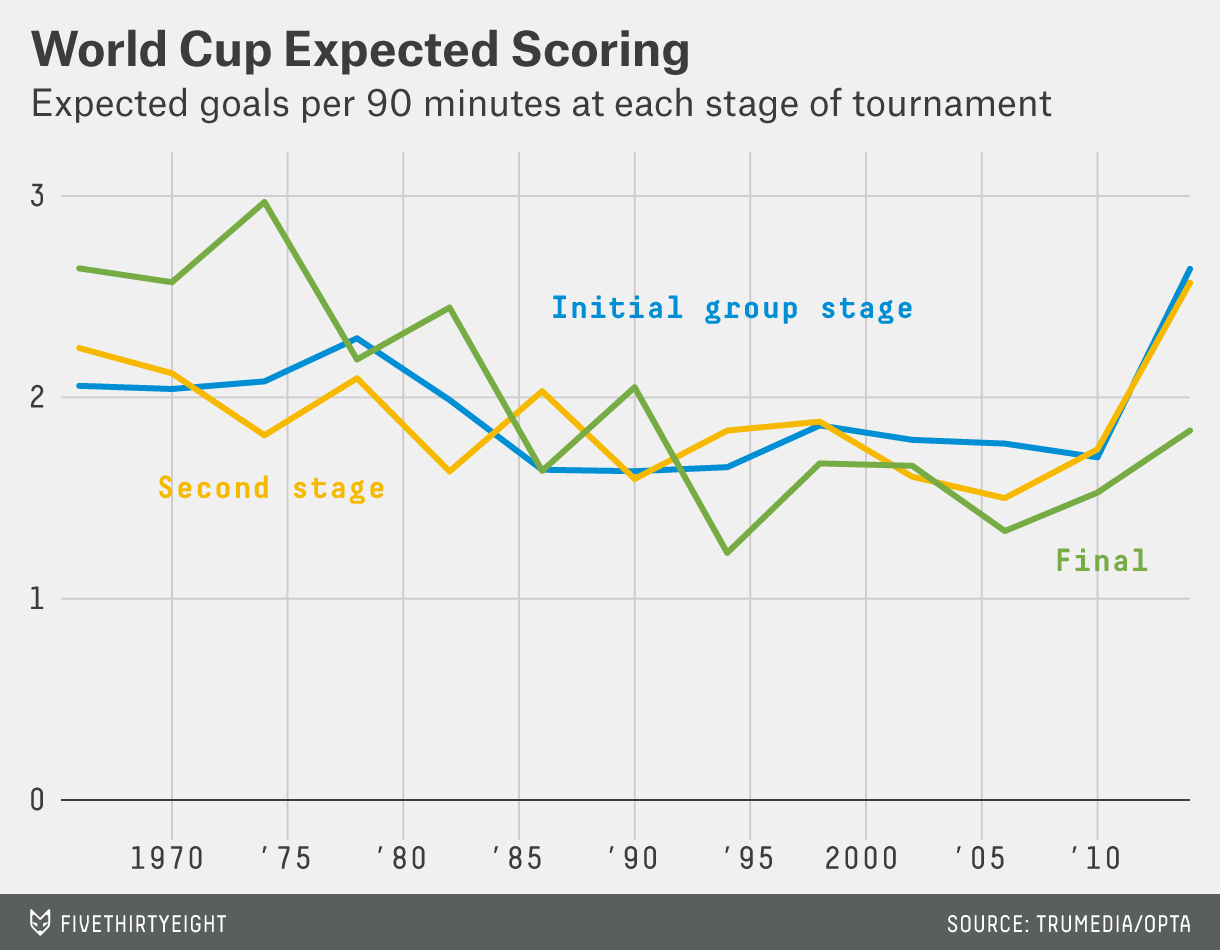 Sunday’s final, for example, should have featured more scoring than it did. Argentina had the better chances, with an expected goal total of 1.26.

Should defense get the credit for so many chances going astray, on Sunday and in the prior six finals? Or is offense to blame?

Separating the two is difficult, but there are several reasons to think bad offense — as in execution, not tactics — shoulders most of the blame.

First, the stakes are high earlier in the knockout stage of the World Cup: A loss ends teams’ chances of winning the tournament. Yet scoring in the earlier rounds has remained strong. It dropped off this year by about a goal per 90 minutes, but in 1994 and 2010 scoring rose in the first three knockout rounds from the group stage, and in other years it has fallen more modestly than this year.

Perhaps this is a function of the rise in quality with each successive round: Maybe the surviving teams in the quarters have better goalkeepers and defenders than the teams they beat in the Round of 16, so they’re more likely to stop shots than is the average team. That might also help explain why, as the Economist pointed out, scoring in the third-place match has remained high: Maybe the losing semifinalists are playing in that consolation game because their defenses weren’t stout enough to merit a final-match berth.

But the same logic would suggest that the level of offense gets better in each round. Teams that advance do so either by scoring or winning a penalty shootout, which requires a few good finishers. The expected-goals model is based on the average taker of a club-level shot. He might not be facing a defense as good as Argentina’s and Germany’s, but then most of the players taking shots for those teams are world-class, not average, club players.

So, does good defense trump good offense, or are some of the best offensive players in the world underperforming in recent finals?

Short of logging every shot myself, I can’t give a definitive answer. Nonetheless, here are some reasons I come down on the side of bad offense:

If offense really is the culprit, that gives reason to think this scoring outage is a fluke and won’t persist at World Cups. After all, when the best teams in the world play each other in other high-stakes matches, the world’s best offensive players often rise to the occasion. Each of the past 11 Champions League finals — generally played by clubs that are at least as talented as the best World Cup teams — have featured at least two goals. And when world champion Germany played pre-tournament favorite Brazil in the semis, the result was eight goals and a new semifinal scoring record.